In this post I review my bicycle tour of Akita and the little riding I have been doing in Yamagata. Highlights of this week were the onsen and the Tozawa lake region as well as the temple in Yamaera. Apart from bicycle touring it also included some considerable train riding.

This part had two highlights, the temple in Yamadera (and specially my perfect timing when visiting them) and Tozawa lake region including its relaxing in Onsens. Kakunodate wasn't bad either.
However there was also a low point, the rainy ride from Kakunodate to Omagari and the continuation all soaked in the train. Not a good idea. But at least something learnt.

Here an overview map of the approximate routes taken (those by bicycle):


In between these far away stretches of rides I didn't teletransport, but took old-school local trains.

Not a lot of this trip was in my original plan for Akita and Yamagata. Specially I hadn't realized how close Kakunodate is from Tazawako, where I had planned from the beginning to go for some relaxing onsen. In Yamagata I had planned on more (and different riding), but after the rain on day 19, I was not going to take chances on day 20, so no ride to Yamadera.

From a bicycle ride perspective, without any doubt the best part was the ride around Tazawa lake. Perfect weather in a nice environment.

As said above, the total low point was the ride in the rain from Kakunodate to Omagari on Day 19.

Regarding gear, I have learnt that even wearing my rain jacket, I still get wet inside, because of the sweat. But I also tried on the T-bag rain cover and saw that it fits, but only if one does put it on slowly and methodically. I.e. not slip in on while it is raining.

This part was heavily influenced by the weather. Aka RAIN! It lead to one relaxing day in Nyuto onsen, without any ride nor sightseeing, just soaking in the traditional onsen at Tsuru-no-yu, but also a rain soak on day 19 and an on-foot (and train) exploration of Yamadera, because I was simply too afraid of rain, which in the end didn't occur at all on Day 20.
Also when I first arrived in Yamagata and looked at my next options, it seemed that the next 10 days would be dominated by rain practically everywhere in Japan, with just a few days of exceptions in Hokkaido, where I didn't want to return. So I had been contemplating going back to Tokyo for some days and wait out the rain. However after more data became available, right now it looks like Sado islands from tomorrow will be good and the day today (Day 21) also did not see any rain, at least not during my hours outside in  the open.

As a last picture of this week, a flower from Kakunodate: 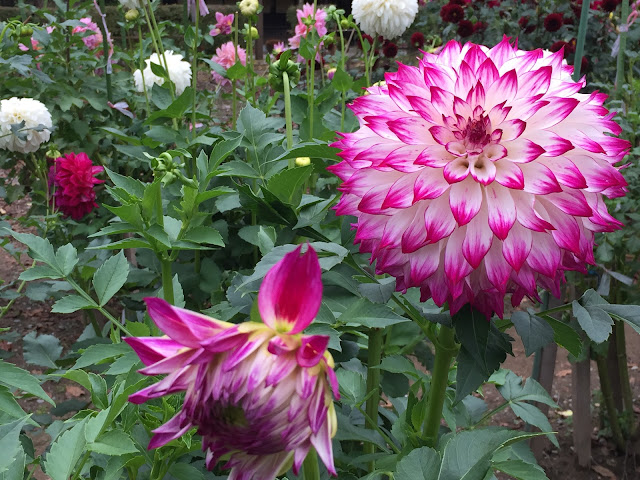 This week did also conclude the trip to Tohoku, now on to Hokuriku!