In this post I review my experience in riding the Shimanami Kaido, one of the best cycling courses in Japan, over 6 bridges connecting Honshu with Shikoku over the Seto Inland Sea, using small islands as bridge bases.

Finally the famous Shimanami Kaido ride! This is definitely a unique cycling road in Japan. Probably in other countries (e.g. central Europe) similarly well indicated cycling roads do exist, but in Japan this is quite unique. And not only that it is well indicated and riding through a nice landscape, the Seto Inland Sea, but the planners of this ride have considered cyclists when building the express way bridges linking Honshu to Shikoku. Each of the 6 bridges (i.e. exluding the first 7th brigde) have a special cycle lane, which is even separated from an other special small motorcycle lane. Also the access to these bridges were built with the cyclist in mind. Perfect ramps up (and down), with an ascent of about 3% but also always in between short stretches of less ascent to catch your breath. Specially the entry to the last bridge was spectacular, with a looping ramp high over the sea. 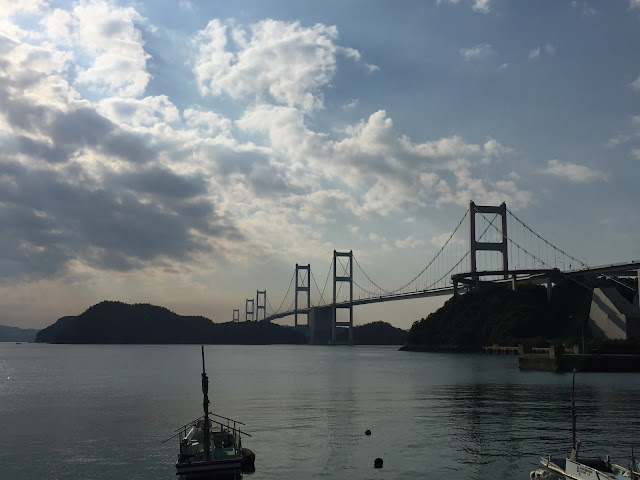 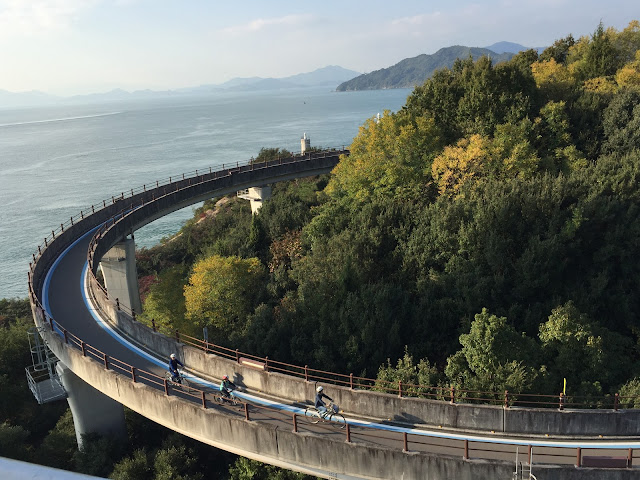 
The actual routes I took are in the Strava or Garmin feed of each day:
Day 48 - Onomichi to Omijima
Day 49 - Omijima to Imabari

I would say that this ride was very similar to what I had originally planned. However to ride this, actually no planning of the route is required. There are good signs everywhere and a blue line on the asphalt leads you through the course. I started on a Sunday with good weather and it was definitely a very popular ride with hundreds of cyclists. And all kind of cyclists enjoying this ride. Families, sport cyclists, middle aged ladies on mamacharis, foreigners, young Japanese couples, bigger groups and solo travelers, including a few other cycle tourists. But on Sunday mostly day trippers. On Monday this changed, much less cyclists, still more than in any other place in Japan on a normal week day.

The main attraction of the Shimanami Kaido is the ride itself with its bridges and the view over the sea and the many small islands. The islands themselves are surprisingly hilly, but not so much the cycle road, as it is mainly on the coast where relatively flat streets have been built. But if you are into cycling up hill, there are definitely opportunities on these islands as well. In Ehime prefecture I had the impression that the cycle road became even better with special cycle roads even on the islands, not only on & towards the bridges. Specially the first half of Omijima had a nice cycle lane.

Now at mid November it was time for the clementine harvest and it was very nice to see all these trees with the bright orange fruits. Somewhat these islands reminded me of the Mediterranean sea. And islands are simply the ideal place to relax. Apart from the islands themselves, the only somewhat touristically interesting spot is the Kosanji temple. It is not a classical temple, but more like a "best-off" interpretation of Buddhist temples. It could also be in Japan theme park somewhere in the US. It even had a Japanese castle. And the strange marble garden on top of the hill mainly convened the idea of money to spend. But after having seen a lot of normal, i.e. traditional, Japanese temples something different is also an attraction.
Obviously to the overall enjoyment of the ride contributed the perfect weather. Sunny plus a few clouds. During the day it was still okay to ride in T-shirt, skirt and sandals. In the evening on Omijima however it got very cold! But the onsen was closeby and heated me up reliably. Timing for this ride was also perfect, as on the next day after finalizing the trip in Matsuyama it started to rain.

Regarding gear, although it is already mid November, my relatively light dresses are still okay.

What was annoying that with Garmin it is not possible to plan the entire Shimanami Kaido as one route. Garmin always thinks that bicycles are not allowed on the express way, which is true, and thus does not offer the possibility to use the bridges. It is very disappointing that such a well made and well known cycle lane is completely unknown to the Garmin planning algorithm.