Today I explored an other bicycle friendly region of Japan, the Kibi plain and ended the day in Kurashiki, a surprisingly nice old town with a strong Meiji era flair and quite distinct from other old towns I have seen so far in Japan.


As this is a bicycle travel through Japan, today I went to a famous bicycle tourism spot in Japan, the Kibi plain. I had planned out the ride on Garmin, but only approximately, as the bike maps I had found were not clear to the detail. However this bicycle road is extraordinarily (for Japan) well signposted. It seems that there have been done even some improvements to the sign posts recently, as the person writing in the link above complained about signage going away after about half of the ride. This now has definitely been fixed: 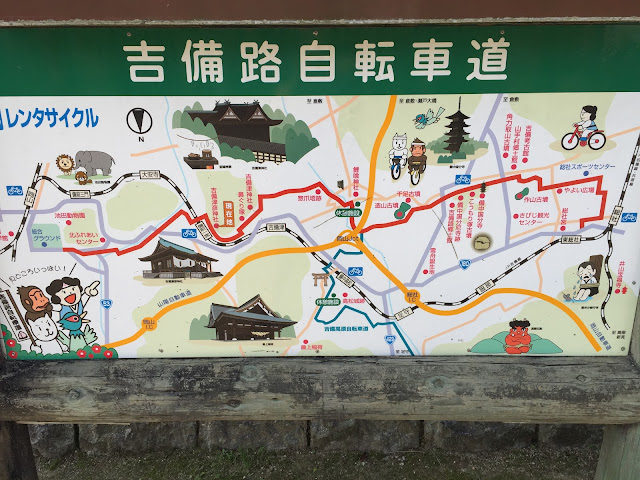 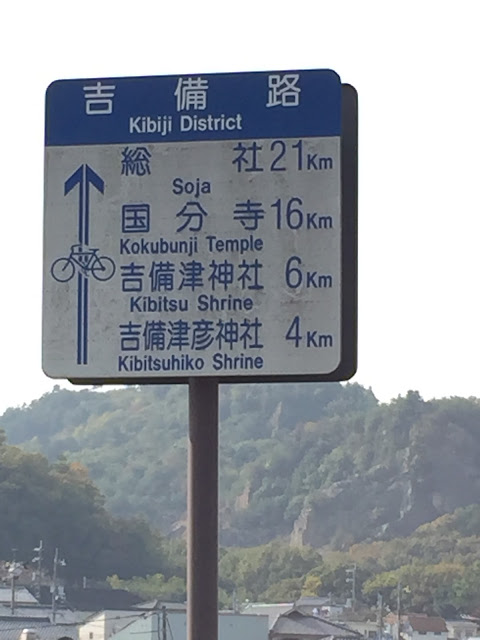 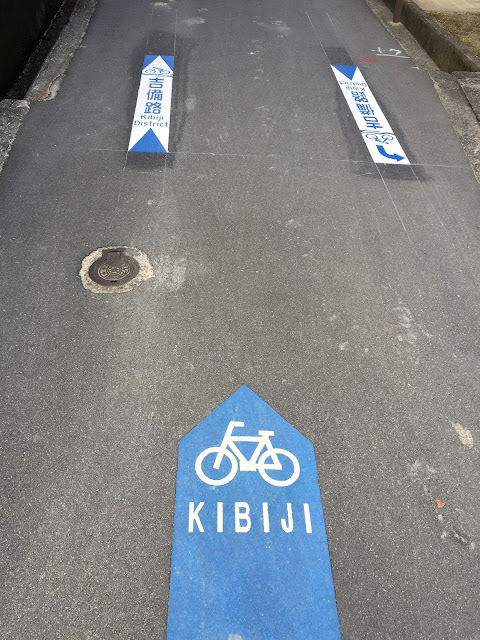 I did not find the very start, but found it at km 9 into my ride. From there onwards it was easy to follow. (If you want to follow the path from the Garmin map below, I left it again at km 29, which is shortly before its end, as I wanted to ride on to Kurashiki). The path is entirely on very small streets or on bicycle only lanes, and I have not encountered a single car on the path. The course is actually nicer than many "normal" Japanese bicycle lanes, because it is not "just" along a river, but actually nicely winding through the - flat - landscape and stopping by a number of temples and shrines. 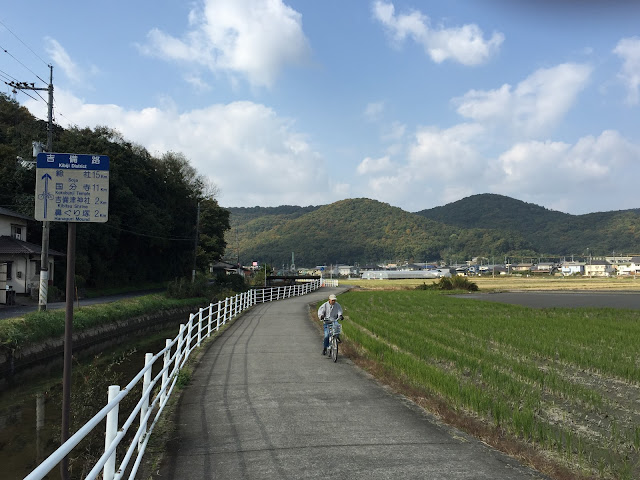 The first shrine was Kibitsuhiko shrine, well visited by local families with their 3, 5 and 7 year old kids for the festival. The girls are always in very colourful (and long sleeved, as not yet married) kimonos while the boys are in more somber and somewhat samurai style kimonos. Some even with a sword. 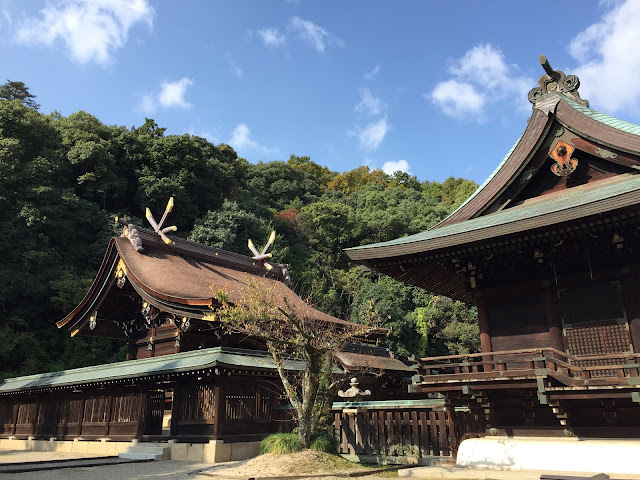 Shortly after, the next shrine, in a previously competing fiefdom, Kibitsu shrine: 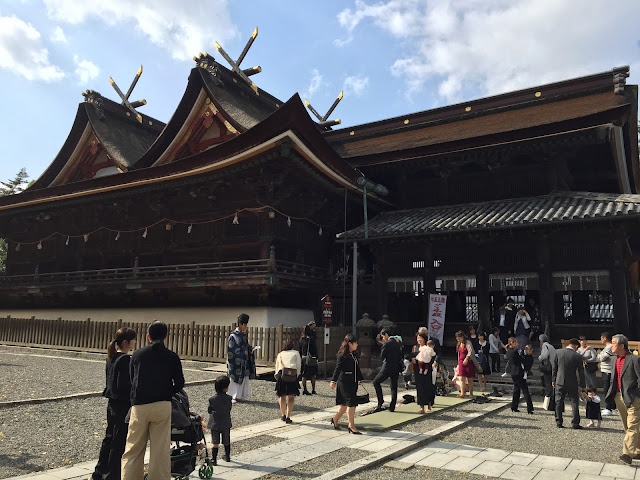 This one was even more popular with the local families and the festival was done in big groups of maybe 10 kids plus their associated adults. (While I think that in the previous shrine, it was a more personal ceremony). The shrine itself seemed to be more popular, by the looks of its large parking lot. Maybe this was also helped by the fact of a nice temple right next to it, connected to the shrine through a long, roofed passageway. 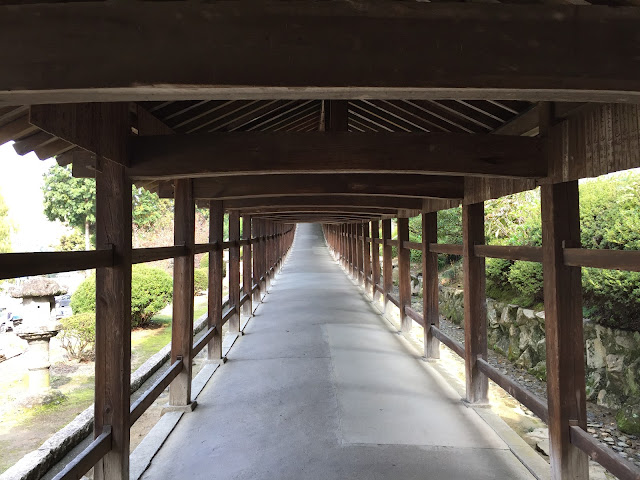 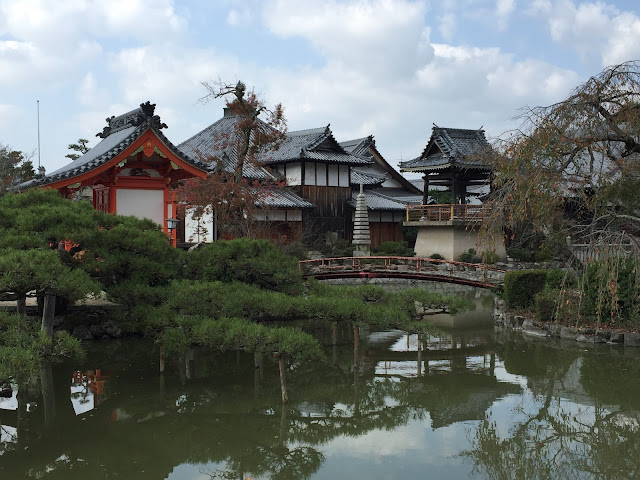 Further down the road first the birth place of a famous Nara time politician and nobleman and not too far his burial mount.

Continuing the ride, the second temple with the first pagoda of the day appeared. It is probably even more scenic to approach it from Soja instead of from Okayama direction, but it was nice all the same: 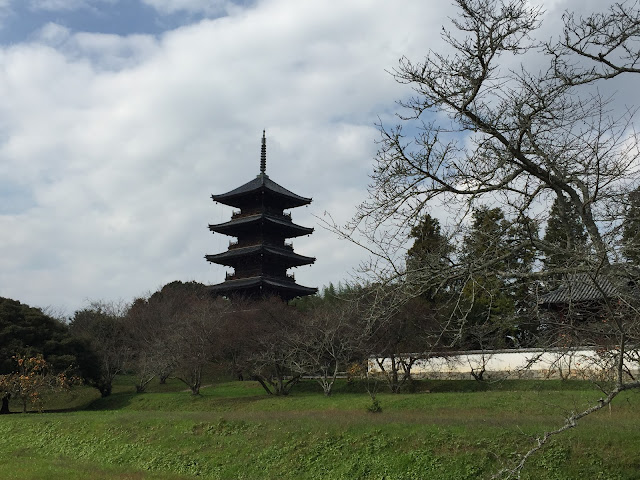 Within the temple grounds was a small shop that claimed to sell food, but it essentially only had omiyage or icecream, which would not have been enough for my appetite, but a quick look on Tabelog found me a cafe really close by where I had Omurice.

After that the bicycle lane still continued through this nice landscape until reaching Soja, where I turned towards Kurashiki. I have to admit that I did not have high expectations of Kurashiki (and old town), partially because I just had visited Imaicho a few days ago and partially because the modern town of Kurashiki is just like any other modern, ugly Japanese town. However I was very pleasantly surprised. The old part of Kurashiki is extraordinarily well maintained, even the electric cables are all out of sight, it is not only one road, but actually a small quarter of the city and it is different than other old towns in Japan (like Imaicho, Kanazawa, Sawara, Kawagoe...). It has a very distinctive Meiji era flair about it, with a few clearly European inspired buildings in the context of a palpably rich merchants town. 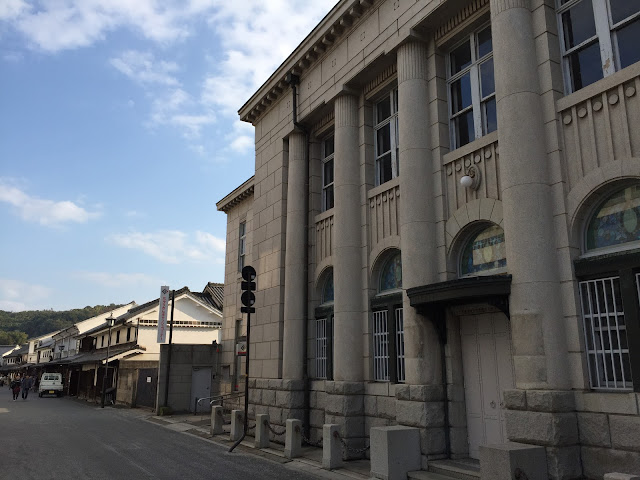 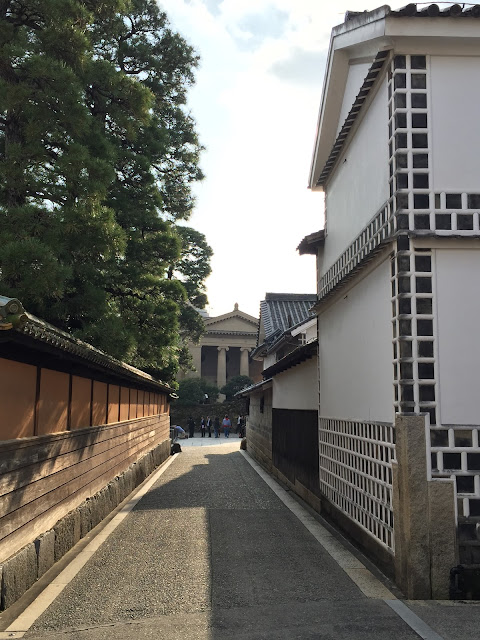 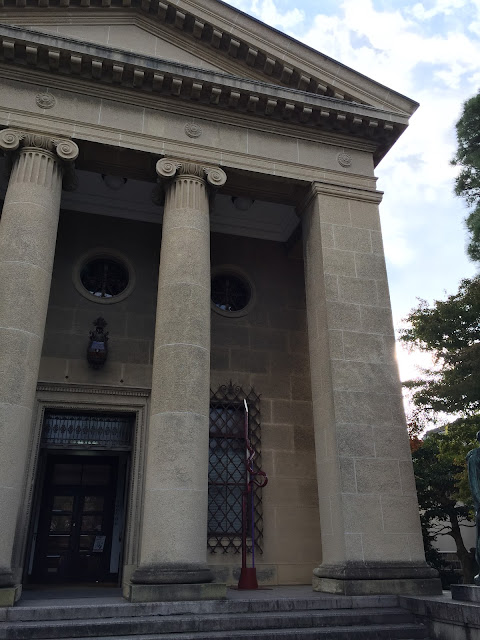 In the center of this small town, runs a channel on which one can even make some very small gondola tours with the gondolier even signing classic Japanese songs. 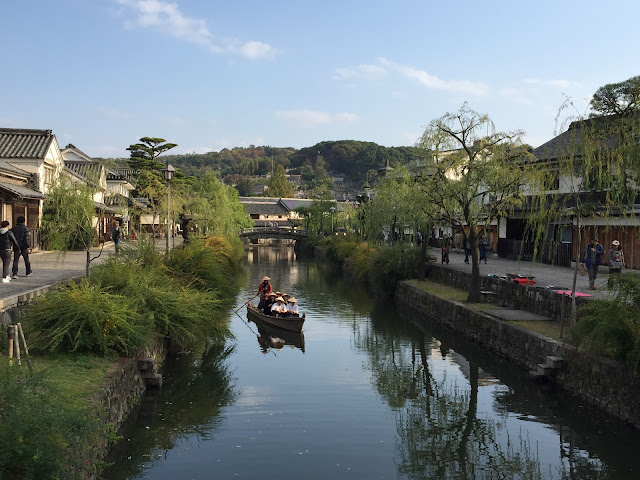 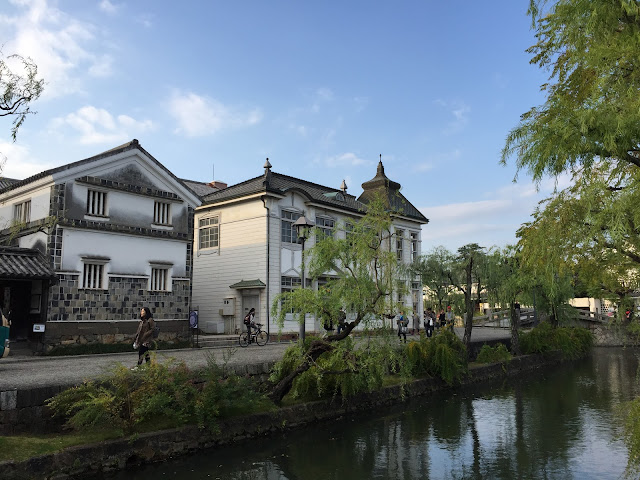 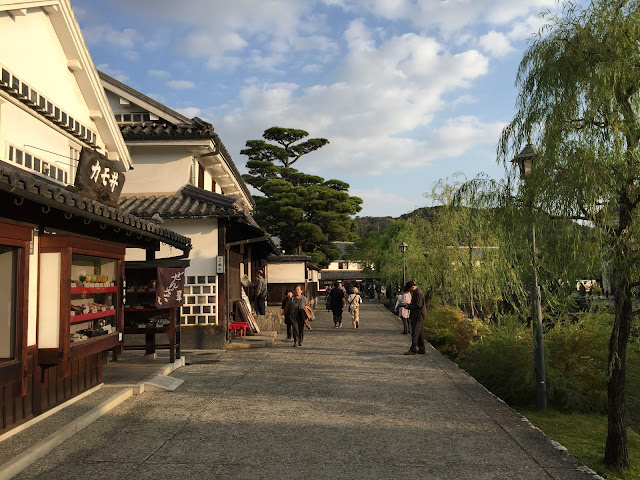 Some of the small roads even reminded me of Malaga: 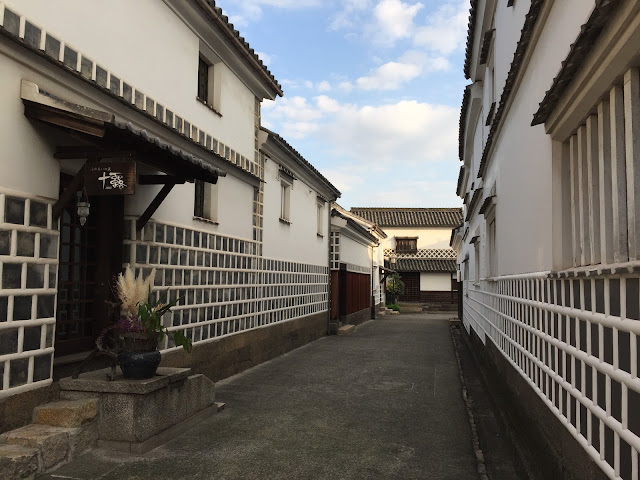 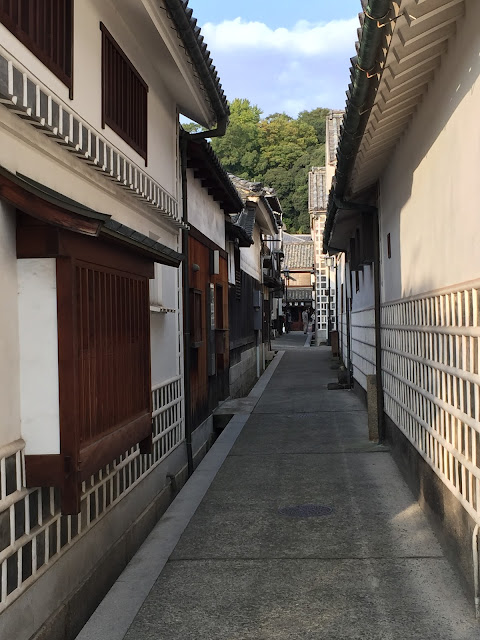 As my visit to Kurashiki took its time, it was getting late (16:00) when I finished and, more importantly cold, so I decided to take the train back to Okayama and then up my mountain to my hotel.