This blog post is about today not going to plan, but still arriving in my pre-determined destination: Shizuoka, ready for departure tomorrow on the Pacific Coast bicycle path.


Contrary to what I had hoped for today again was a day without any bicycle ride. Nor actually anything else. My plan was to get down to Takayama by bus, then take a scenic Hida train down to Nagoya which supposedly is an extremely nice train ride I had been looking forward to. Then use the good weather forecast for Nagoya and the time I would have at Nagoya to ride to the railway museum and then take an evening train to Shizuoka, where I had booked my hotel for tonight, in preparation of tomorrows departure on the Pacific Coast bicycle path towards Mie prefecture.

Well, only the very first leg of this journey went to plan. In the morning (after an early morning soak at 7:00 in light rain in 3 of the rotenburo) I took the bus down to Takayama. Hirayu onsen was probably right now at the peak of autumn leave viewing, but with the rain, I could not really enjoy it. So here as a bye-bye to my hotel a picture from their parking lot out to the surrounding mountains: 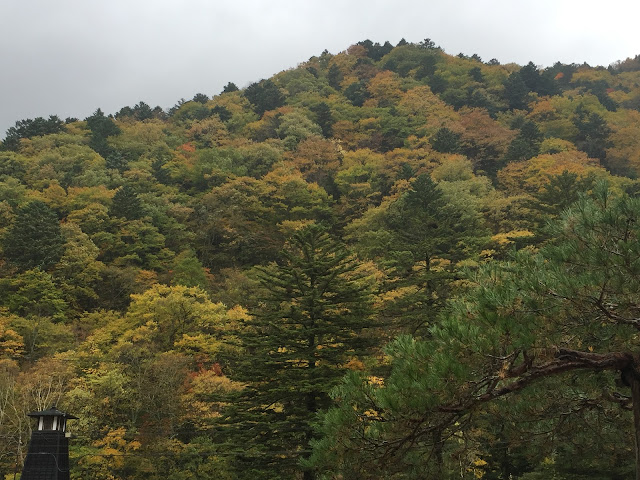 I had a nice seat right behind the driver and through the rain I could see a bit more of the landscape: 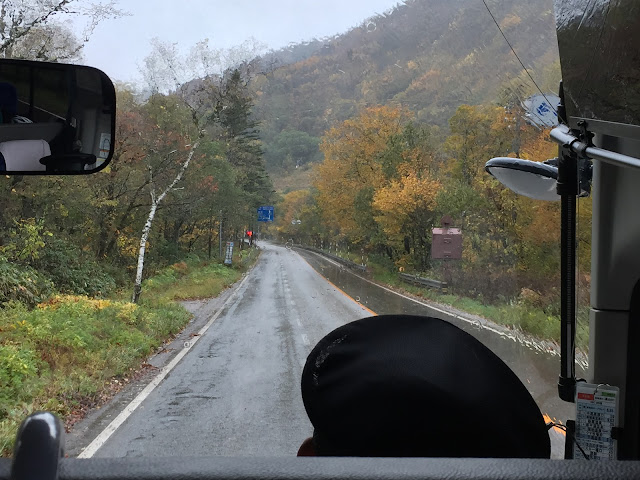 As yesterday the typhoon 20 came running through Japan it had been raining in huge amounts and incessantly for hours and hours, which has brought the rivers to their maximum capacity and what was when I drove up 2 days ago a normal, small mountain stream had transformed into a big, vigorous river: 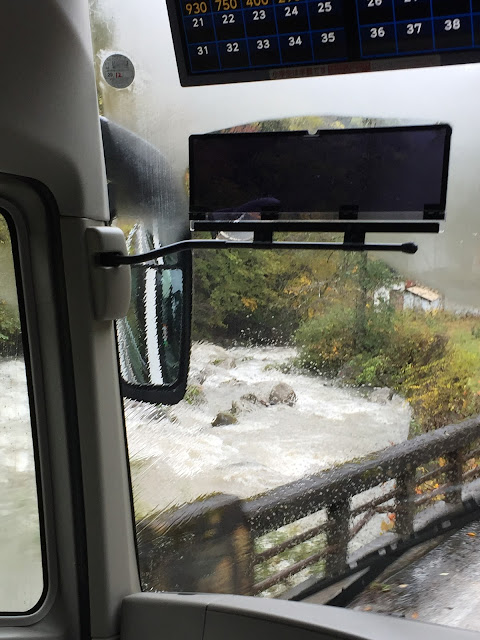 In Takayama I got off in the center of the city and recovered my bicycle from the local repair shop, where I had it over the weekend for cleaning. It is a bit cleaner now... but not spick and span. But still...

When I arrived at Takayama station, in comfortable time to catch the 11:30ish Hida train down to Nagoya, I discovered that the entire train service in and out of Takayama had been closed down since the previous day and reopening was only planned (at the earliest) around 15:00 in the afternoon. As I had seen when I went up to Hirayu onsen, that there are also buses to Nagoya, I went to the bus terminal right next to the station, and was still lucky to get a ticket for a bus, departing at 13:00.

This left me with about 1.5 h to fill, which I filled with a very tasty Hida-ramen soup at a small local restaurant close to the station run by two elderly ladies in a very old building. In order to get to the toilet one needed to cross their entire kitchen and get into a backyard.

Then on with the highway bus, which actually also drove through a very scenic route. It seems that around Takayama there is really only mountains and trees. LOTS of trees. Trees starting to turn now colourful: 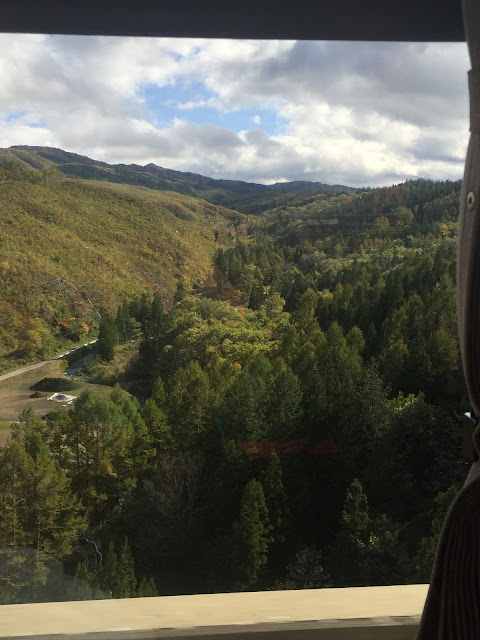 At the time I arrived in Nagoya (15:30) it was too late to still get to the railway museum, so I went directly to Shizuoka with the next available shinkansen (which anyway was only within an hour). The shinkansen on this track had suffered quite heavily from the typhoon yesterday, with a train getting stuck the entire night because of flooding in one of the tunnels. Today everything was back to nearly normal, but trains were still running at a delay. Slight delay, about 3 minutes at most. But that is obviously quite a delay for a Japanese train. 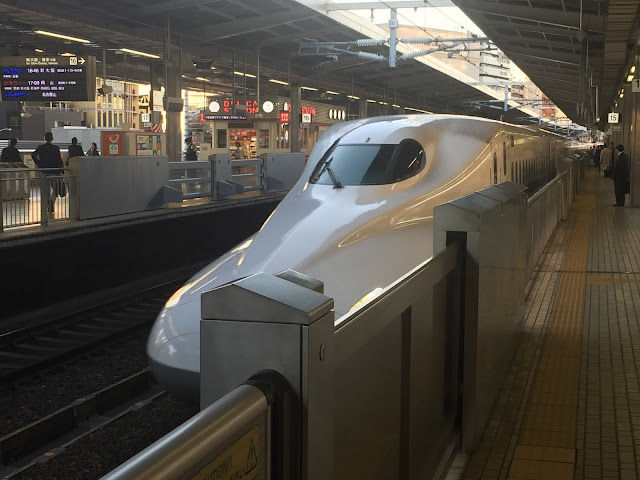 My shinkansen did bring me reliable to Shizuoka and my business-cum-wedding ceremony hotel close to the station.

Per KANcycling there is a bicycle path some parts of the way from Shizuoka to the ferry going to Ise. Apparently this bicycle path has been started to be build at least 15 years ago, but might still be patchy. Well, tomorrow I will discover more. Finally back on the bike. Also finally back to nice autumn weather in Japan. The first time since many days (maybe since I left Aomori), that the weather forecast for most parts of Japan for the next 10 days is sunny or sunny&cloudy. But not a lot of rain forecast. Yipee!