Today only a short ride on the bicycle, but an interesting and scenic ride into the Kurobe gorge and a perfect ending to the day in a hot onsen pool, gazing at monkeys in the total wilderness.

Bicycle: 4.5 km
Train: 40 km
Riding time: 20 min
Total ascent: 45 m by bike and much more on foot in the gorge
Route: Kurobe to Shin Kurobe by bicycle, shin Kurobe through Unazuki Onsen to Keyakidaira and back to Kuronagi
Weather: Sunny and some clouds, maybe 13 C

Today still weather was good, but from tomorrow rain is forecast. I made the few kilometers from my hotel to Shin Kurobe station and parked there my dear brompton and left also most of my luggage in a locker, setting off into the Kurobe gorge with only a handbag. 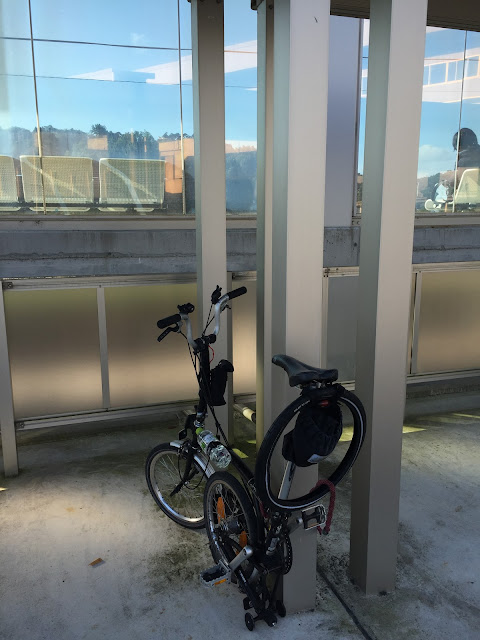 Already the first leg of the train travel was quite nice. In a train that felt of luxury, although it came at the price of a normal local train. There were seats with tables facing the window, other seats with small tables for two and for groups of four. 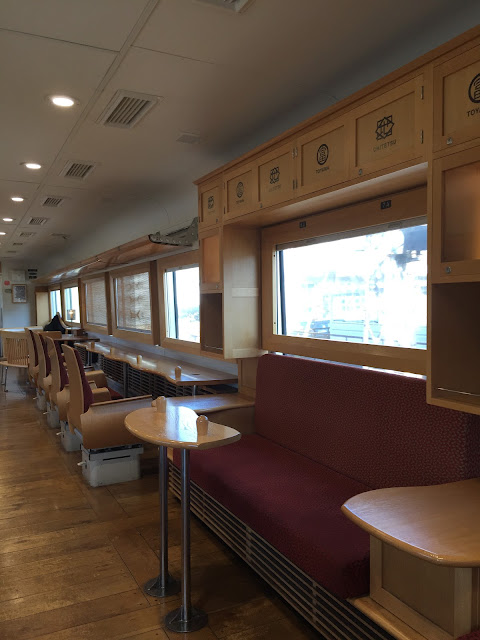 After about half an hour of ride, we arrived to Unazuki onsen, where the journey continued in a much smaller train right into the gorge. 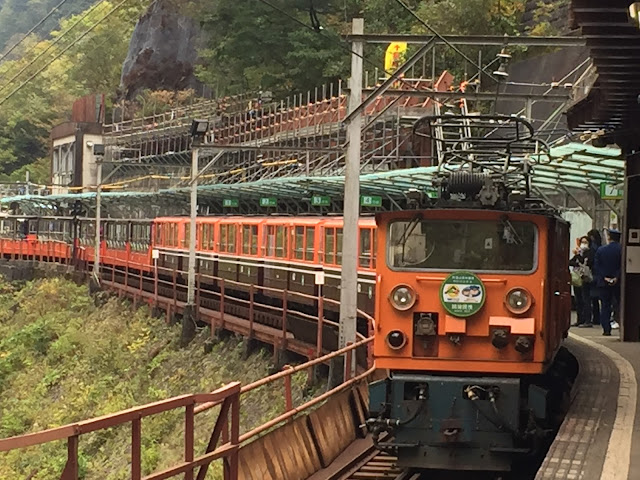 This train ride is quite well known, specially for its autumn colors. So there were several buses full of tourists, including a group from Korea. However as it was a weekday I had no problem in getting a ticket for the next train. I took one in a carriage with windows (as opposed to one that is open-air) fearing that it might get a bit too cold on the ride. 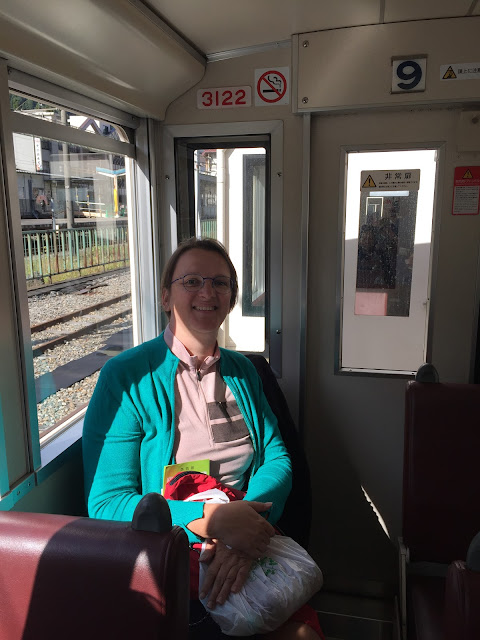 This small train was originally built for the construction of a series of dams in the valley and is still used by the construction and maintenance workers. This is probably also the reason why the locomotives look so industrial. 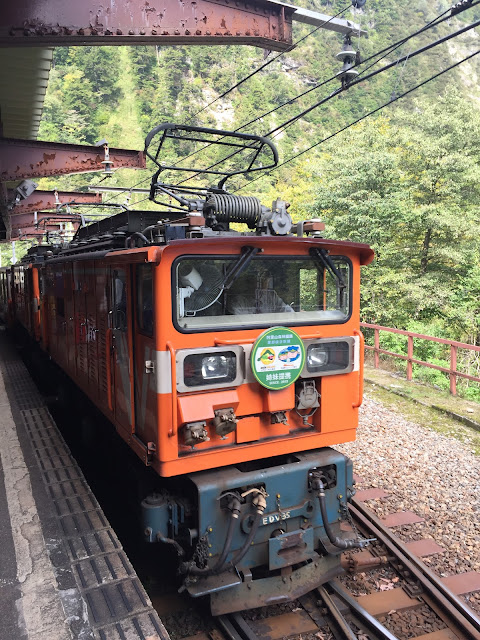 But nowadays it is also widely exploited for tourism and there is good reason for this, as the following pictures of the gorge can proof. 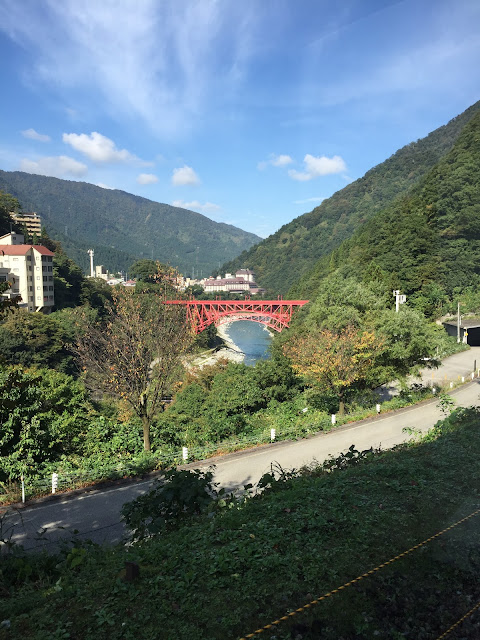 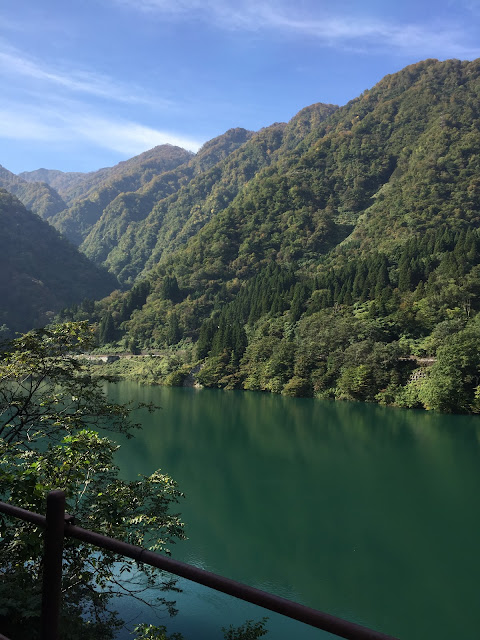 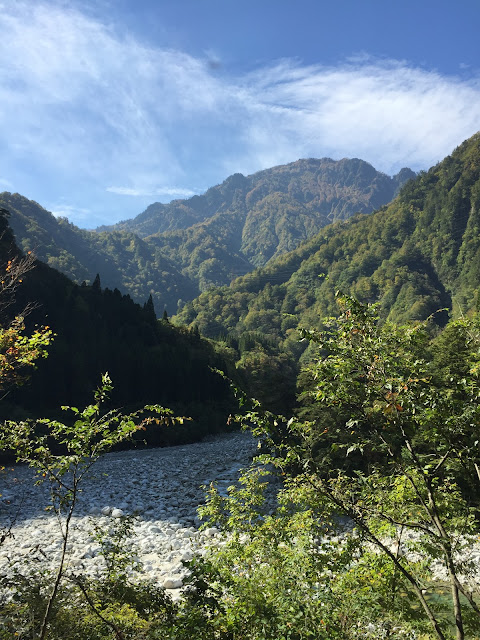 This castle like looking building with its own railway tracks leading right into it, is probably the nicest building in the ravine. 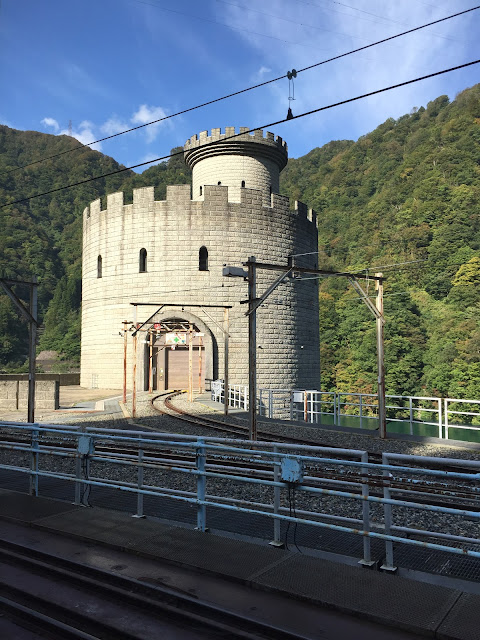 I headed right to the final station, Keyakidaira, from where there are several walkways into the gorge, with more opportunities for pictures. 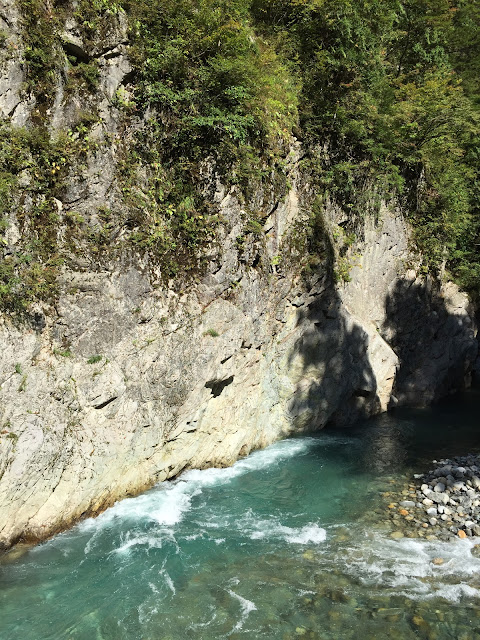 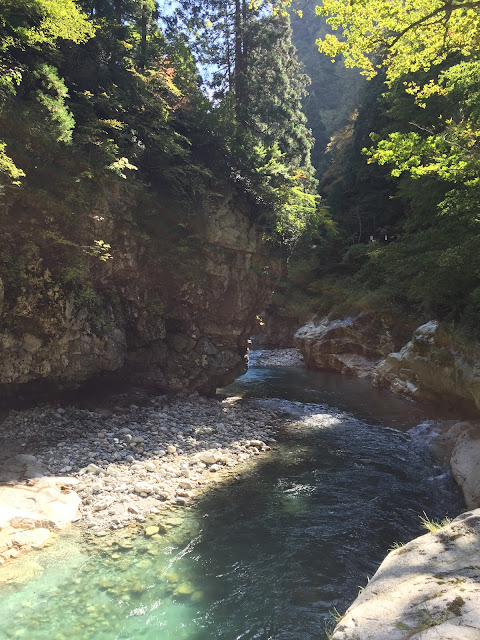 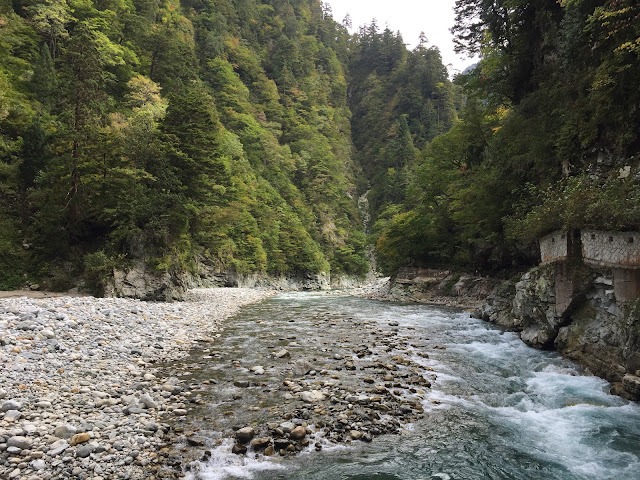 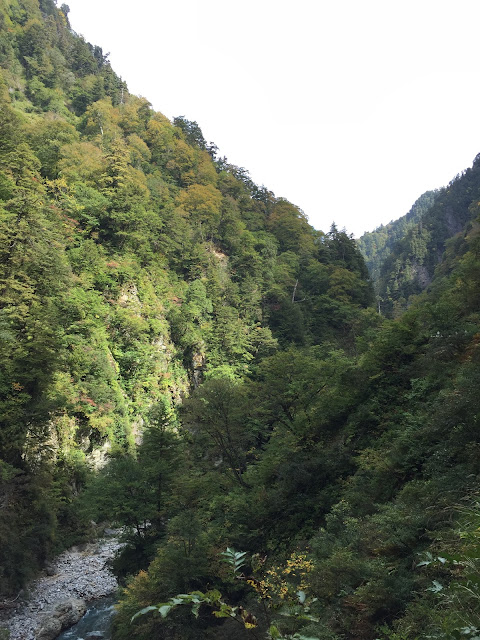 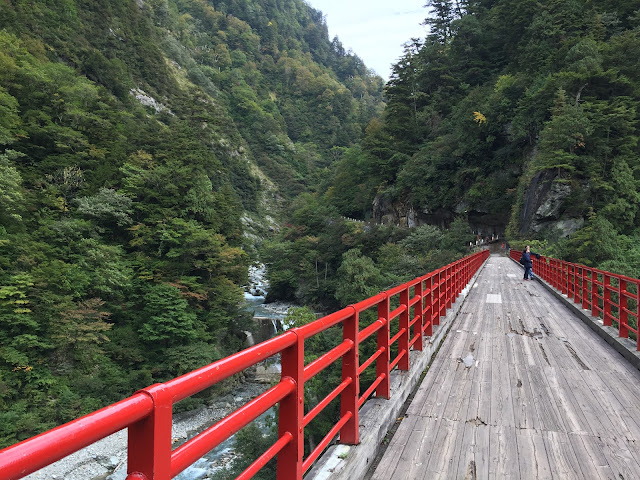 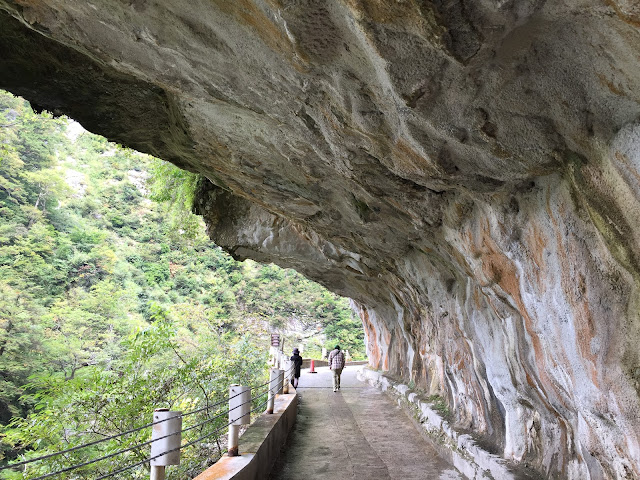 After some explorations. I headed back down, but only until Kuronagi.

In Kuronagi I had managed with only two days anticipation to secure a room in a Ryokan close-by. Close-by, but through a mountain walkway. About 20 minutes from the small station. 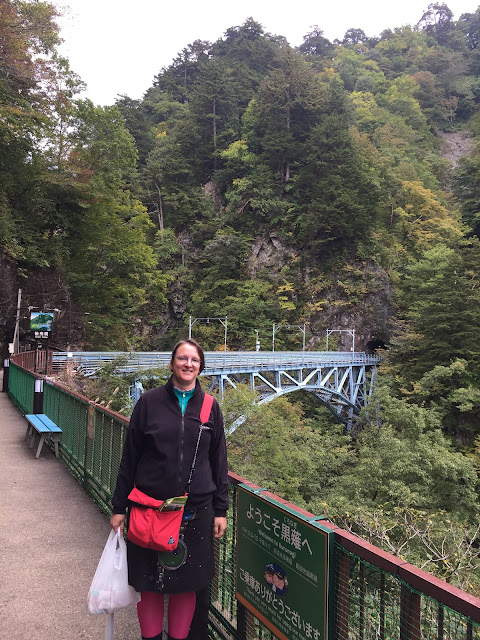 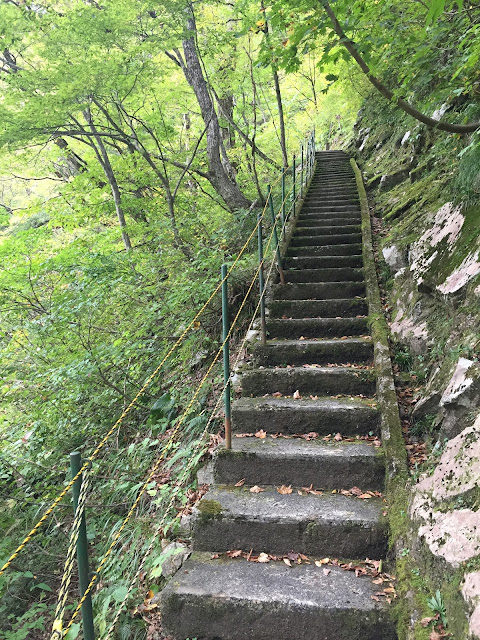 The Ryokan lies spectacularly at the turn of a river, with a waterfall right outside my room window. 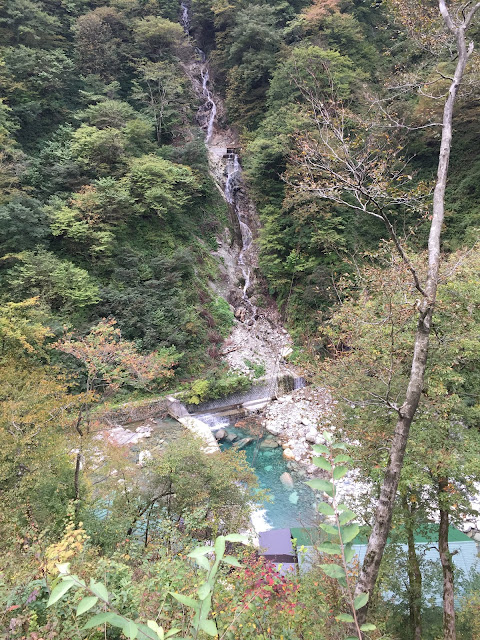 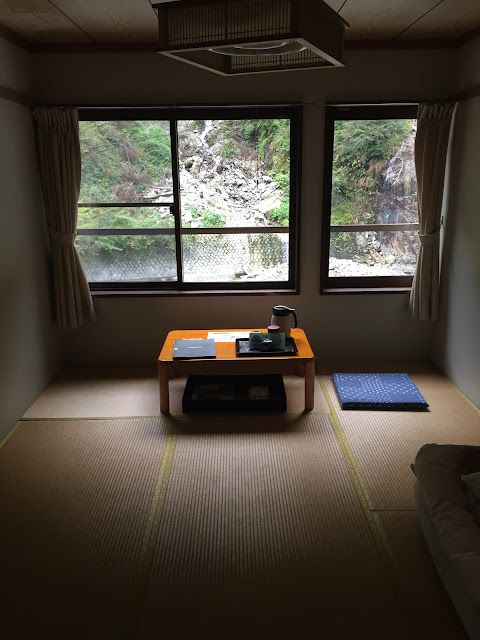 But the best treat is the onsen. There are two rotenburos. One is mixed bathing for most of the day and the other one is female only. The big, mixed one lies close to the river surrounded by rocks and woods. However one cannot really see the river from it. The smaller, female only onsen, lies high above the river with direct sights into it and as a small plastic roof. Which will be handy tomorrow, as rain is forecasted.

As a special treat there was also an entire troop of monkeys on the river. 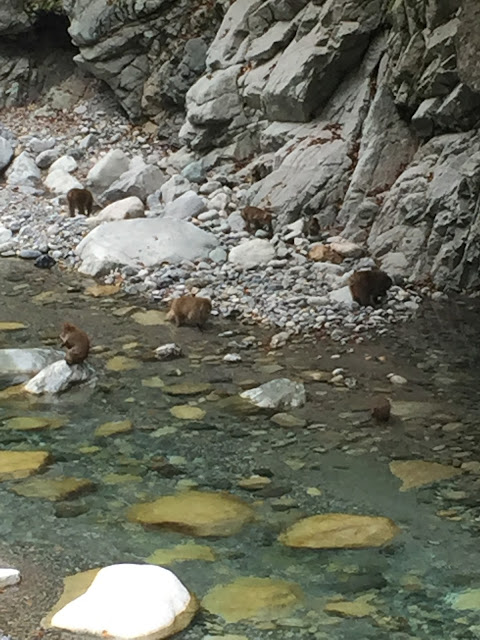 And crossing the river over a purposely built monkey-only bridge.

From the female only onsen I could also observe them directly. So what could be better than to soak in a hot (but not too hot) rotenburo with for sure healing waters, looking over a river into the woods and watching monkeys as they gather food and do their daily chores.
It was an entire monkey family with kids, babies and adults of all sizes.

Dinner in the ryokan was early, at 17:30, and I got lucky and was invited by 3 elderly Japanese ladies to join them on their table, as I looked so lonely on my single table.

Early dinner allowed for an other soak in the big rotenburo afterwards, at the female only hour between 19:00 and 20:00. Actually it wasn't a female-only hour, it was a Susanne-only hour, as none of the other guests made the treck (may 200 m) out of the ryokan at night. But once I got over the initial feeling of cold, stripping naked outside in mid October, the soak was superb.

And then off to an early rest. Tomorrow I'll try to get up at 6:00. If it isn't raining I will definitely have an other soak in "my" big outdoor pool again before breakfast.