This post describes the bicycle tour out of Yamagata to Kaminoyama Onsen, a second small ride through Yonezawa and the train ride down to the coast of Niigata.

Bicycle: 22 km
Train: 150 km
Riding time: 2 h
Total ascent: 160 m
Route: Yamagata to Kaminoyama Onsen by bicycle, then on through Yonezawa to Niigata by train
Weather: Between Yamagata and Kaminoyama onsen sunny, some clouds, 24 C while at Yonezawa, cloudy, 17 C


Surprise, surprise: Sun! When I looked up the weather for these days two days ago, it seemed that rain would be pouring down, similar to Day 19. However, the forecast got changed, and now the rain is only forecasted for sometime tonight. When I saw this today in the morning, I plotted out quickly a route that would take me in the direction of Niigata. Well, only the very few first kilometers, until Kaminoyama onsen. I had also briefly considered riding on to Yonezawa, which would have had the benefit of a longer ride, and of one train transfer less, but looking at the hill that I would have needed to climb between the plain around Yamagata and the one around Yonezawa decided against it.

Before starting my day, I abandoned yet an other piece of equipment, the umbrella I had bought yesterday. Never even opened... and there it goes with million of other umbrellas being abandoned every year in Japan. 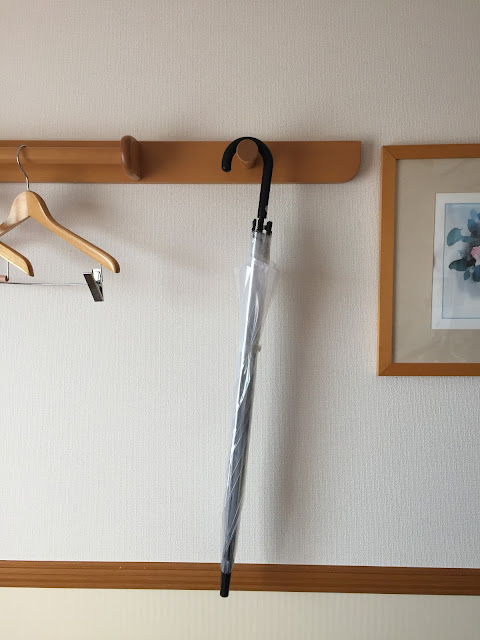 When I got out of the hotel this morning, it was actually so warm, that I decided to just ride in my tank-top, no sleeves bicycle shirt. Which was perfect with shorts and sandals until Kaminoyama onsen.

As the name Yamagata 山形 = "mountain shape" could have let me to suspect, Yamagata city is actually surrounded by quite high mountains. The highest one being the one with Zao onsen ski resort on top of it. 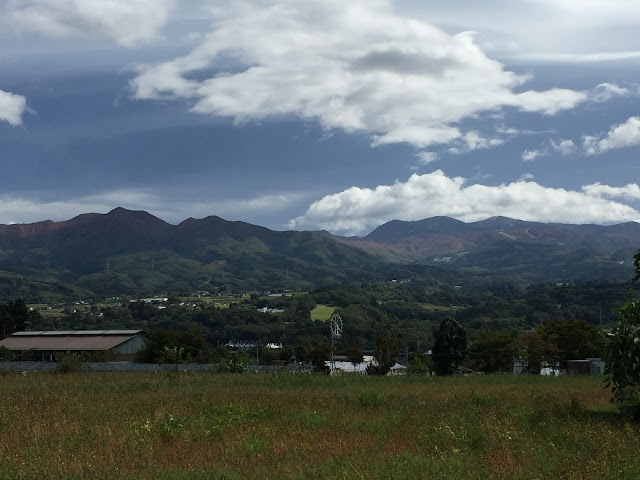 The ride through the country side to Kaminoyama was nice, but nothing spectacular. In this region in addition to the "normal" rice fields, there is also a lot of fruit being grown, apples, pears, cherries, grapes...

Here a picture of the slow shinkansen travelling through the plain before Yamagata. It really is more like a higher class express train than a real shinkansen. This one here definitely just traveled at a normal-train speed. Nothing shinkansen like. 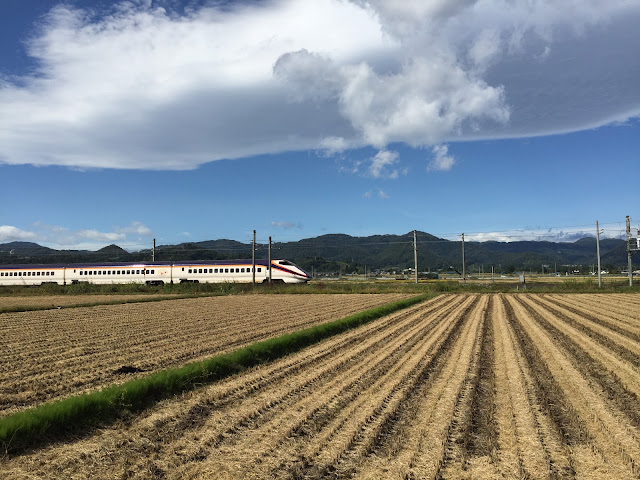 Kaminoyama onsen, as the name suggests, is famous for its onsen. However not necessarily for its scenic onsen. Here it is more about the water itself, rather than spending time in the water admiring the landscape. I asked at the local tourism bureau and they informed me that there is one onsen with rotenburo. It was going to close for daily clean up really soon, but I really wanted to get into a rotenburo, specially on such a warm day, so I made a sprint (on the bike) to the onsen, got my ticket (1,000 yen!) and splashed into the water. All alone.
Now the rotenburo part was really small, but being alone more than sufficient. But it was also really hot. I could get in, if I didn't move to much and at least sit on a stone. I never managed to get in all, and after a few minutes I needed to get out again in the fresh air to cool down. So actually not having so much time in the onsen was not a problem. It was not a place where I could have spent a long time anyway. And I washed off all the sweat I had accumulated  coming up from Yamagata, and changed into new cloths. So that was perfect!

After that I still had time for a short exploration of Kaminoyama onsen, which sports a few samurai villas (which I didn't visit) ... 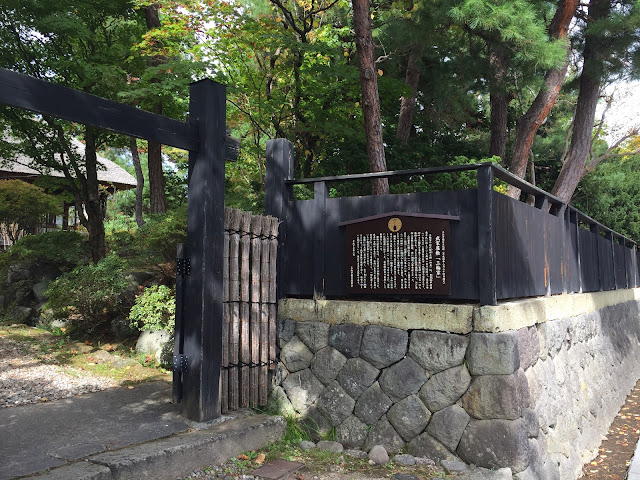 ... and a - reconstructed castle on a hill top. I think I read that originally it was actually on the top of the hill, but somehow when reconstructing it, they choose a place slightly lower. I guess the feudal lord would get very angry if he ever awakes from the dead. 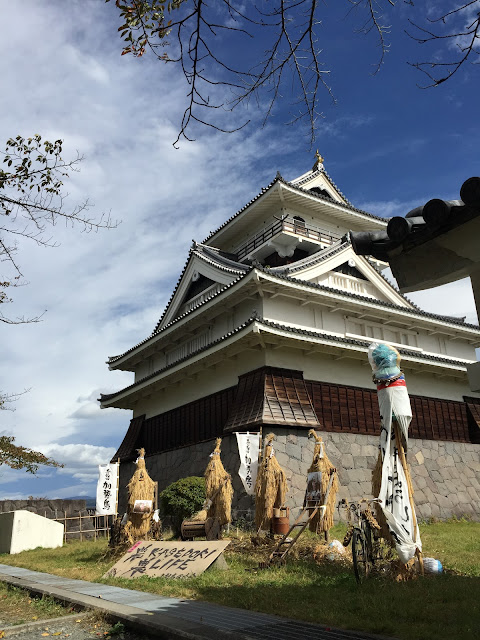 Then it was time to take the Shinkansen, well, the slow version of the shinkansen on to Yonezawa.

For details on the first part of the bicycle tour today in Yamagata, checkout the below maps:

In Yonezawa I had 2.5 h between trains, so some more time for sightseeing. Yonezawa essentially is famous for 4 things: Apples, Beef, Cherries and a shrine: Uesugi shrine. So there I went. 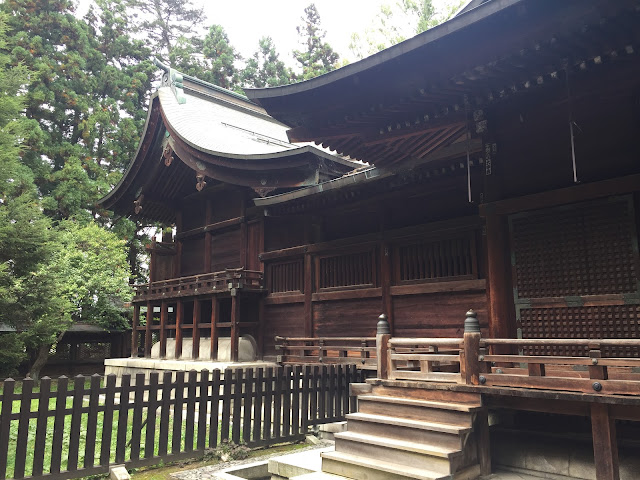 The rest of the city of Yonezawa was quite depressing. Half abandoned and for the rest simply typical Japanese small city ugly architecture. As also the clouds seemed to bring potentially a lot of rain, I made a quick return from the shrine to the station. That gave me time to admire one more of Yonezawas prides. The beef! 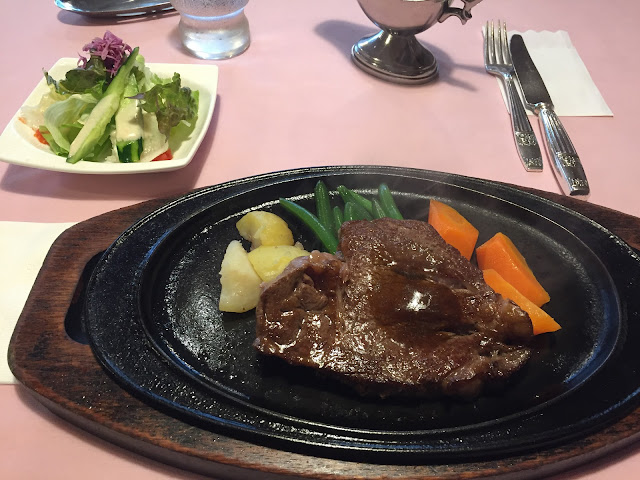 This piece of beef was really excellent. Tasty, juicy and very soft. A real highlight of my visit to Yonezawa.

Then back to my next train, an other 3 hours in local trains into Niigata.
Overall the connections from Yamagata to Niigata aren't very good. When looking up my options, it seemed that it is either direct express bus from Yamagata or shinkansen nearly back to Tokyo (to Omiya and then on to Niigata), or a lot of local trains. I opted for the local trains. The train ride out of Yonezawa was quite nice, through the countryside, fields, apple and cherry plantations and small villages that seemed much more inviting than Yonezawa. Probably the plain around Yonezawa would also make a good destination for cycling, although there is no specific sightseeing spot that I am aware of.

When it got dark, I brought out my computer and started on this blog post. Both trains are mainly used by high school students returning after a day home. While in the Yonezawa region it was not so surprising that pupils from the small villages need to go to Yonezawa or other bigger towns for school, on the Niigata stretch I am a bit surprised. I would have thought that the towns here are a bit bigger and thus one could attend a more local high school.


And tomorrow off to Sado island!

For details on the second and third part of the bicycle tour today in Yamagata and Niigata, checkout the below maps:


And just for the purpose of completeness, here the ride from Niigata station to my hotel: