Today I started my ride through Aomori and as a highlight of the day made it up to Mount Osore (the ascent by taxi though), one of the three most sacred places in Japanese Buddhism and a great place to bath in acidic, hot water right from a volcano and just a stone's throw away from the main temple.


Today ended perfectly. In an onsen right below a temple with hot water flowing in directly from a volcano. 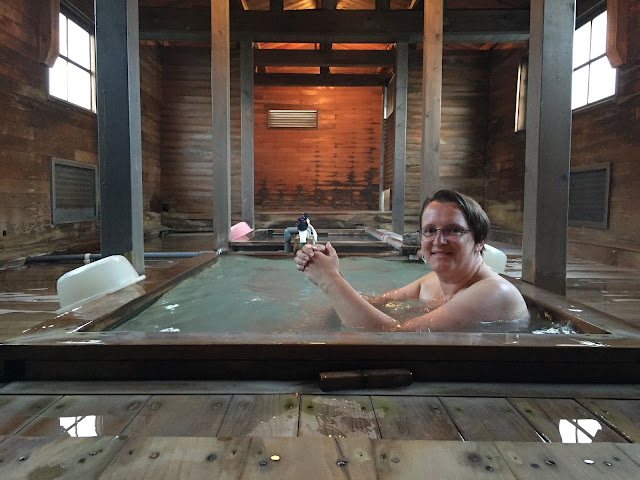 The day however started quite early (but not as early as tomorrow) in Hakodate, where I packed up, and left my hotel at 7:30, in order to be at the port around 8, right in time to buy my ticket to Oma, that I had reserved yesterday.

Around 9 we were allowed to roll onto the ferry. First the motorcyclists (3), then me, the only cyclist, and then cars and small vans. 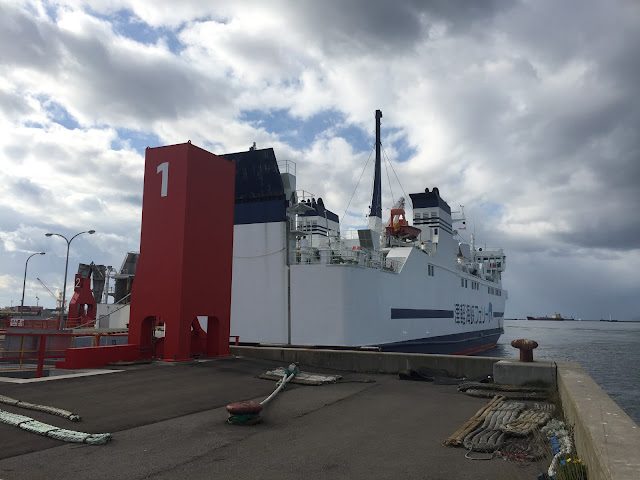 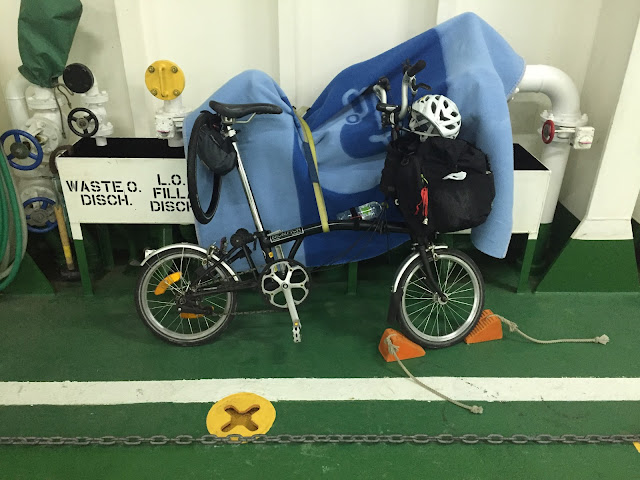 My brompton was secured to the ship and I went upstairs to a room layed out just with some carpet where we could all sit on the floor. Japanese "standard class" on ships. From my room we had a great view over the ocean: 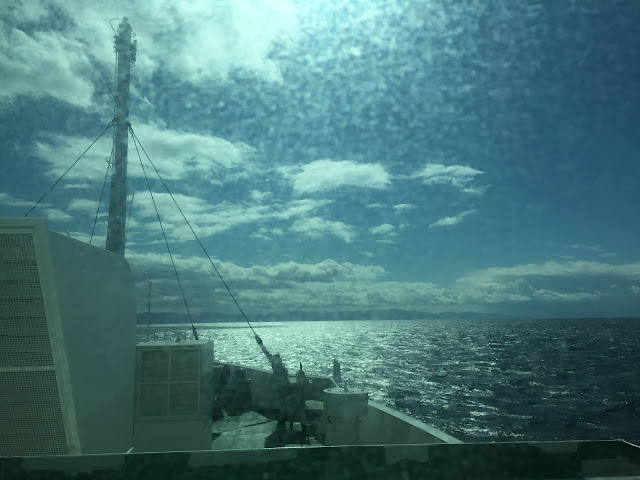 With me in the same room where 4 Japanese couples, somewhere between 50 and 80 years old that were also travelling through Japan. One couple by motorcycle and the others by car or camper bus. We all exchanged our travel plans and travel impressions. It was actually quite nice with all these other travelers. One elderly men even gave me as a present two origami figures of cranes that have a basket: 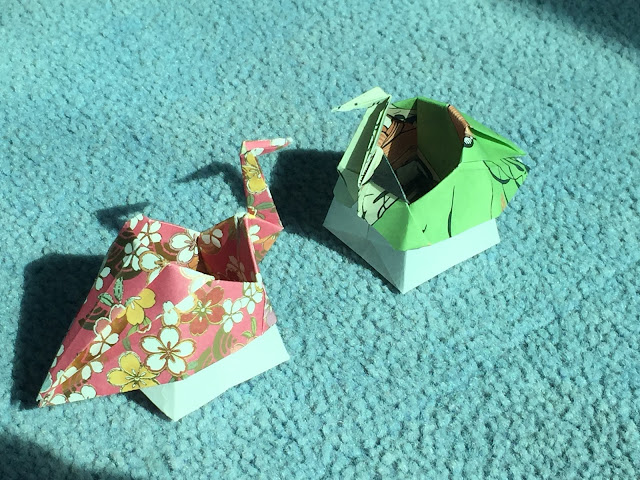 (As they are difficult to carry around, I have abandoned them in my room in the monastery below the  Buddhist scroll. Assuming that this is the nicest place where I can leave them.)

Before coming on the ship I had also spoken with the other motorcyclists, as we were waiting together in one area in order to be let on the ship. One was a guy (well, probably in his 50's) from Iceland travelling the world in what will be 2 years on his motorbike. So far he has done Europe, he started in the Netherlands, Russia, Mongolia. Now Japan and then on to North America, Central America, South America and next year summer again up to Alaska.

As I was the smallest vehicle of all, I was the last to leave the ferry in Oma. I then did ride on to the Northern most point of Honshu, where it was very windy. Luckily for me, the wind resulted to be tail wind for my ride. Otherwise it would have been a very hard day. 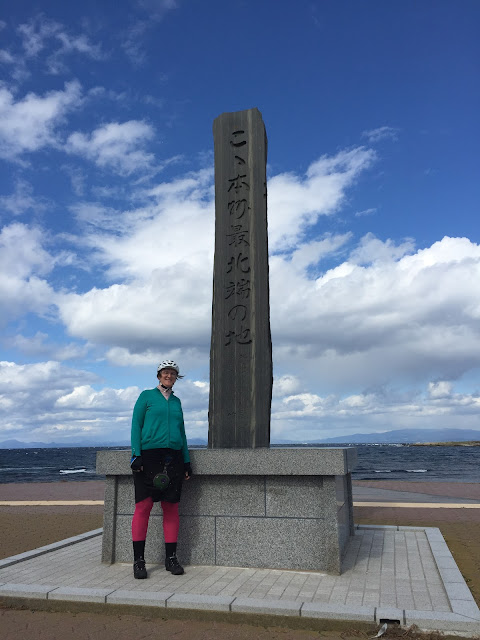 And then I set off along the Northern coast toward Ohata. Along the road there some algae were drying in the fresh ocean air. Either spread out or dangling in the wind: 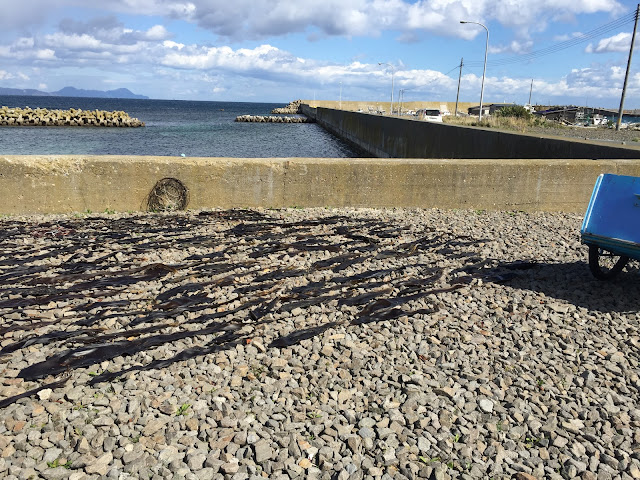 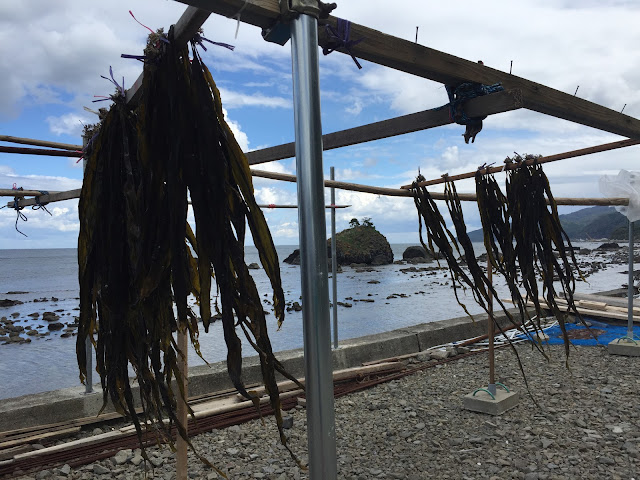 The weather forecast for Oma and Mutsu today was: bright sun. However at least initially there were some dark clouds that seemed to bring rain. At some point it even started to rain very slightly and I already looked out for the next village in the hope to be able to hide somewhere and wait for the end of the rain. However instead of rain, at that moment the sun came through and it was sunny (plus some high and quickly moving clouds) for the rest of the day. Until now (19:00), when there was just a surprise rain shower. But from my warm room I couldn't care less. Even my bicycle is inside in the entry hall.

I knew from the Garmin elevation profile that there were going to be some up-and-down and one 100 m hill before coming to Ohata. Luckily the 100 m hill was steep on my end, so I could relatively quickly push the bicycle up, while the ride down was long and not very steep, so also ideal for rolling it down into Ohata: 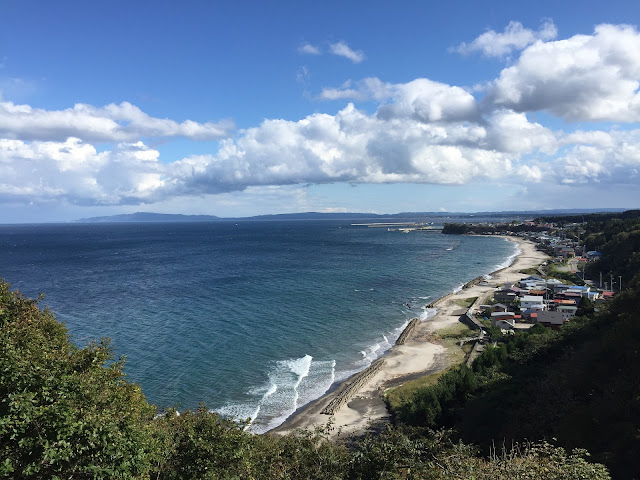 If you look at my original plan for this ride Ohata was the start for a 200+ m ascent to Osorezan, through a road where I am unsure if it is asphalted or not. However when I reserved in the accommodation on Osorezan yesterday and asked about bears, I was told that yes, there might be bears. Specially on that road, as it is not very much transited. Thanks to these bears I had the perfect excuse for not making the ride up the mountain! (Per the taxi driver the bears in this region are small... but still, don't want to be chased nor eaten even by a small bear)
So I had asked the lady what are my other possibilities to come up to Osorezan. There are buses, but the last left around 14:00 from Mutsu, and no buses from Ohata, or taxis. Originally I had planned to take a taxi up from Ohata, but when I arrived there it was still early, the weather was quite nice and the ride over to Mutsu not too far, nor too hilly, so I decided to go on to Mutsu and take a taxi from there, which were supposed to be cheaper anyway, and I got a bit more time on the bike.

In Mutsu, thanks to Google maps, I found a taxi company and was driven up the mountain directly to my accommodation of the night. In looking at the road I have decided to not ride it down tomorrow, it is partly very steep (one first needs to climb up a hill and then down probably 400 m), slightly moist and partly also covered with fallen leaves. So it would seem not to be a very enjoyable and probably not even very safe ride down. So tomorrow will start with a bus ride down the volcano and then on my bike along the coast of the Mutsu bay.

While the ride today was nice, my accommodation for the night is spectacular! I am staying in the Shukubo of the Bodaiji temple on the lake of Osorezan. A Shukubo is a temple accommodation run by buddhist monks and includes a monks dinner and breakfast, i.e. all vegetarian and quite simple. My room however is so far the best (and largest) I had had on this entire travel, probably around 28 tatami mats in size: 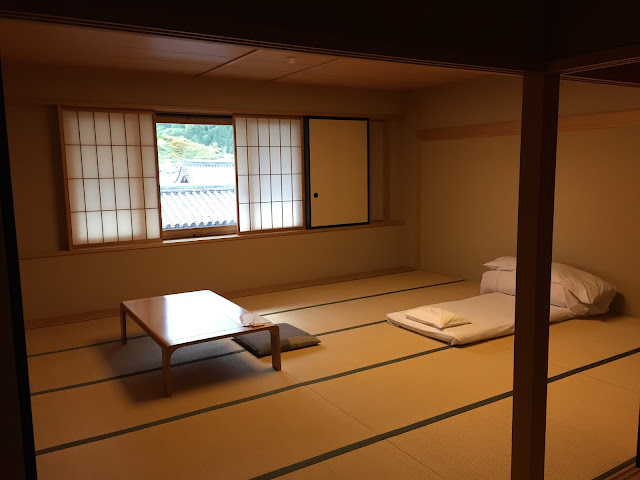 And a room with a stunning view: 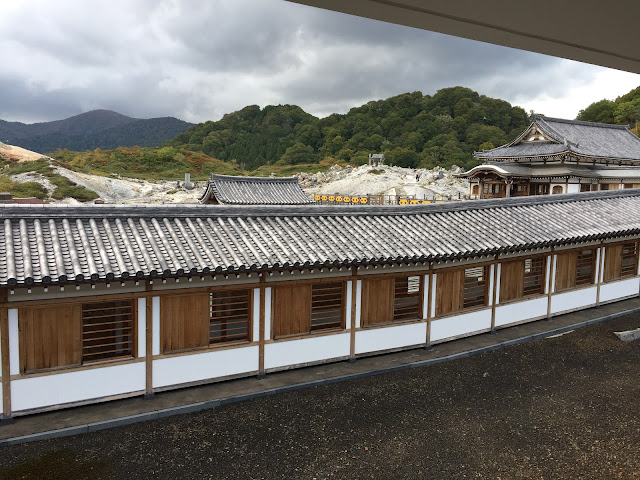 As in some previous nights, I have added one more futon to my bed for the night. So it gets softer. Luckily enough in Japanese rooms, there is a cupboard where all the futons are stored in, and as the rooms are meant for more than one person, there are normally spare futons. Which I simply use.

The best of the Shukubo so far however was the onsen. There are 3 onsen right on the grounds on the temple, actually on the way from the main gate to the main temple building, plus one more a bit farther away plus a modern one inside the accommodation itself.

Today in the afternoon I first tried out one on the temple grounds, that gets its hot waters directly from the volcano next door. 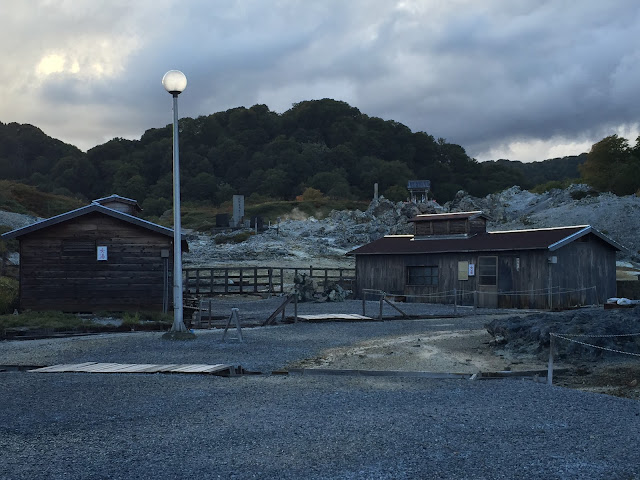 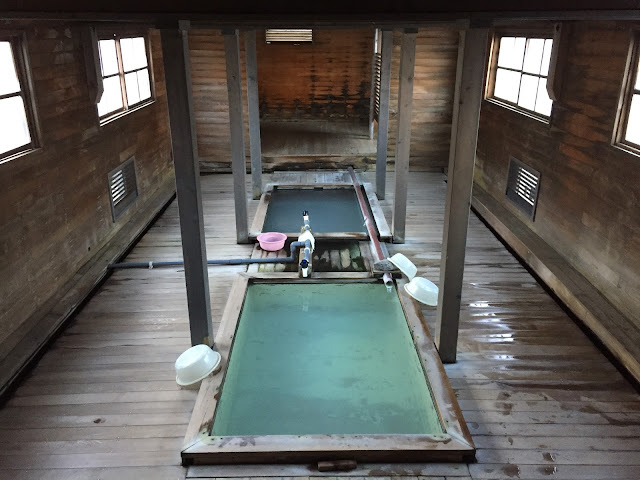 Although there is no rotenburo, with the fresh cold wind coming through the splits in the wooden hut, it was like being in a rotenburo. Simply great!

Before I started soaking I did at least a short exploration of the temple grounds in the sunset: 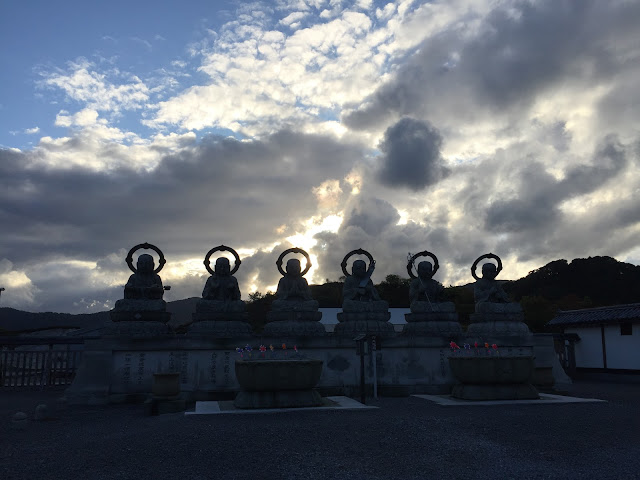 Dinner at 18:00 was a very quiet affair. The few guests, I think we were 12, were all sitting on the same long table, waited for the monk to tell a prayer and then we were allowed to eat. Everyone ate in silence. No idea if that is what one is supposed to do in a Buddhist monastery. And after 20 min the same monk came back said an other prayer and we finished our meal. Actually, while the accommodation is perfect, the dinner was a bit deluding. I had hoped for a very tasty Buddhist vegetarian meal, like the one we had a few years back in Koyasan, but it was just normal vegetable, tofu and rice. No extraordinary tastes.

Now in the evening I will have an other bath here in the more modern bath and then off to bed, so I can get up by 6:00 tomorrow morning, in time for the 6:30 morning prayer that we will all attend in the temple.

As probably to be expected on top of a volcano in a Buddhist monastery, internet connection is patchy. So I wont be able to upload this post until tomorrow, but then with pictures, maps and links.

For details on the bicycle tour today in Aomori and Hokkaido, checkout the below maps:

Here also the short ride in Hakodate today in the morning: