After the good start yesterday on the Pacific Coast Bicycle Route, today I wanted to ride from Omaezaki to Bentenjima, however sand and water did make that impossible (for me) to achieve on a bicycle... also because probably a third of the way I was pushing the bike through the dunes (called bicycle road).

The good thing about today is that now I am sitting in a warm hotel room. The time between leaving my previous hotel today in the morning and arriving here was not so great. The following factors contributed to this:

After the relatively good weather yesterday, well, no rain and tailwind, today rain was forecast. But stubbornly and in disregard to my previous rain day experience (see Day 19) I still did set out after a late breakfast for today's ride. Essentially because the rain did not seem to be very strong, per the forecast. And actually it was not very strong. But still, I got pretty wet. Which in itself might have still been tolerable, would the road have been in better conditions. Well, IN condition.

So I wanted to follow on the Pacific Coast Bicycle Route, which actually between Omaezaki and Hamamatsu looking at a map (here and here) seems to be pretty well established.

And it started quite well, with this sakura-tree lines part. This time the entrance was also relatively easy to find, one just needs to bypass the nuclear power plant on the land side and shortly after a sign indicates towards the bicycle road. The bicycle path is quite solitary, so if you decide to give it a try, get something to drink, as I did, before commencing. 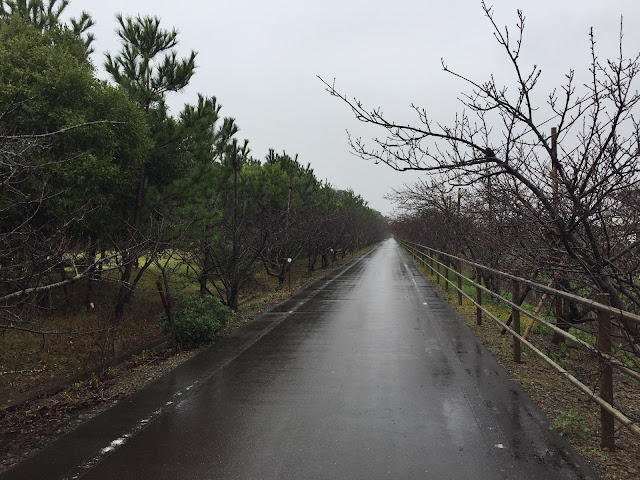 However you also better get a sand shovel or a bulldozer for the ride, because as the bicycle path runs on top of the dunes, well, the dunes got to the bicycle path. Not everywhere, but in many places. This here was probably the place with the highest sand dune in the middle of the bicycle lane, but at least it was not very long. 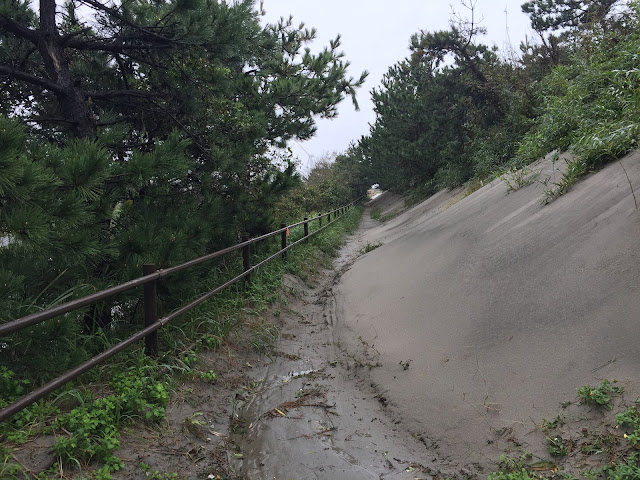 But in many other places the path was buried by sand: 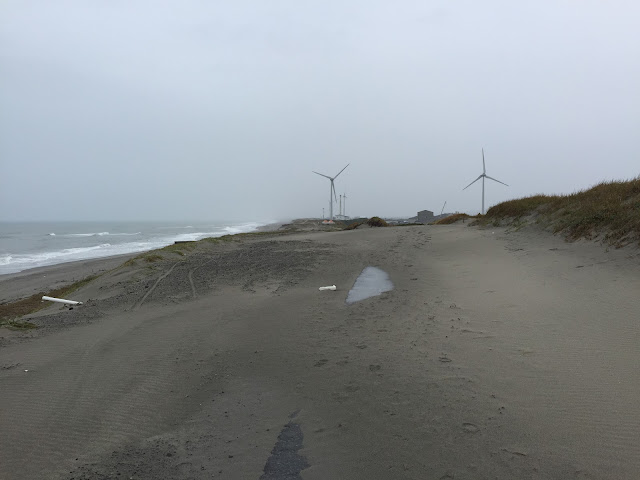 At this point actually I had decided to give up on the bicycle route and take a way down, to a normal road, which was indicated. BUT when I looked at the way that was leading down from the bicycle road, it was essentially only sand, steep and ended in a makeshift pond on the road below. So I continued to literally push on.

So ultimately for most part of the way it was a short ride and then off again and pushing the bike through vast amounts of sand. Some sand also definitely got in the bicycle, so from a certain point onwards, maybe about km 20 the bicycle also started to make strange sounds. I did ride a bit further, and actually the bicycle lane from about km 23 became very nicely passable (as it was no longer riding on the top of the dunes, but a bit behind), but with the strange noise, the rain and the wet clothes, I decided to make a turn inland. So unfortunately I have no idea how the lane continued. I had seen very nice pictures, but that was on the internet, in real life I have mostly seen sand and water. The local authorities seem to have also recognized the problem of sand and are doing some works to improve the situation by 2019, however the only proof of these works I did see was a solitary, elderly worker cleaning the way in one point by hand with a small shovel. I hope that's not the plan how to clean up this bicycle lane.

This bicycle lane is also very lonely. I hardly met anyone (and not a single cyclist). And sometimes it is engulfed in strange smells, chemical smells, because right behind the sea shore there are mainly plants, no houses or villages.

My turn inland did lead me to an AEON mall, which was a very convenient place where to finish my ride today. As a first stop I went to the local gasoline station and used their car washing facility. Although I used the brush for tyres, it seems that my bicycle was more dirty than a normal car tyre. At least when I put the brush back after a lot of scrubbing, the brush had changed from bright yellow to a black covered yellow...

My next stop at the mall was the disabled toilet to get changed into dry (and thus warm) clothes. Then off to the local Daiso to get a water proof cover for my iPhone and then lunch at CoCo. For lunch I had curry, really ideal when you feel down and slightly cold.

At this point I was in the middle of nowhere and still more than 30 km away from the hotel where I am now, and it continued raining, albeit not very strong. But I had changed into dry clothes and did not look forward to change again into wet cloths or put the wet rain gear on top of my dry things. So I decided after considering my options to get a taxi to the nearest station. It was very nice to sit in the warm taxi and chat with the (female!) taxi driver.
In Iwata station I got lucky and the next train in direction Hamamatsu just came to the platform in the same moment as I did. And from Hamamatsu to Bentenjima, where my hotel is located, it was an easy train connection. 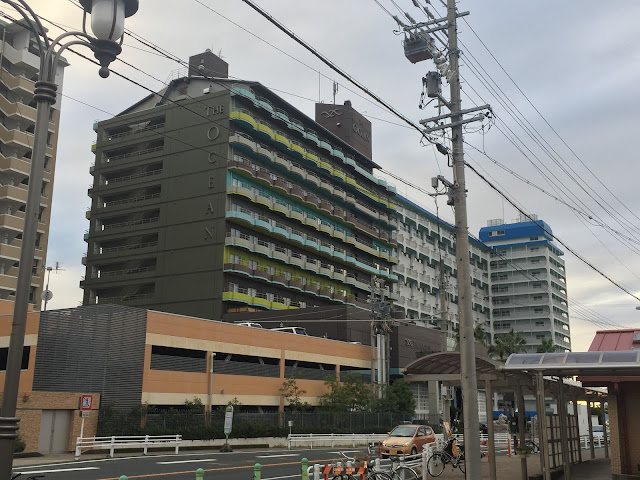 Actually my hotel tonight is also somewhat disappointing. On the internet they claimed to have 2 rotenburo, but actually it is 2 normal bath tubs, that have been put on a balcony, where you need to put in the water for taking a bath. I guess that the view is excellent, right over the ocean, lake Hamana and a torii in the lake... but by the time I had washed my cloths and gave a shower to my poor brompton (I hope the hotel does not see this picture...) it was already dark, so no view anymore... I'll have a peak tomorrow morning. Even the internet in the room is VERY slow, so slow that right now I cannot even add the pictures (will do with better internet connection later). 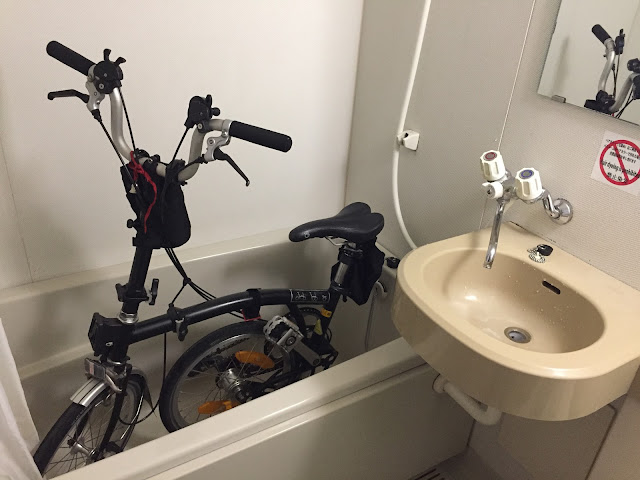 
For details on the bicycle tour today in Shizuoka on the Pacific Coast Bicycle Route, checkout the below maps: