Today finally it was back on the bike! And directly one of the bicycle rides I have been most looking forward to: Exploration of the Pacific Coast bicycle path. This blog post describes the bits and pieces I have managed to discover of it as well as other roads taken to come to Omaezaki.

I knew from KANcycling and from the MLIT web pages (that now no longer work) that there is a bicycle road from Shizuoka to Irugo, and then on ferry over to Mie prefecture. I also knew that it is hard to find and not continuous. KANcycling also recommends to do this route from Irugo to Shizuoka, as apparently the wind is mostly blowing from West to East, but I found it more logical to do it from Shizuoka, to then have at the end of the multiple day ride the highlight of Ise. As the information I had on the route was patchy at best, I went to the Shizuoka tourism information office yesterday, however they had never heard about this cycle road. 5 minutes later after putting on the counter all the information they had on cycling in Shizuoka, they discovered that this cycle road exists, somewhere, but they only had very small bits and pieces of it (like 5 km at best).

I had planned this tour only roughly on Garmin, as the cycle road does not show, and I hadn't found exact information where it is. Well, I know found a bit more, which I have added in the planning section. However I found this only now, after riding for the day, so actually I did only bits and pieces. In total I found 3 parts of the "Pacific Coast Bicycle Route", with quite varying quality. However overall the ride was nice, even without long stretches on the famous bicycle lane.

Today in the morning, not very early actually as I got finally a long night sleep thanks to the dark hotel room, I left my wedding hotel right outside the station of Shizuoka. 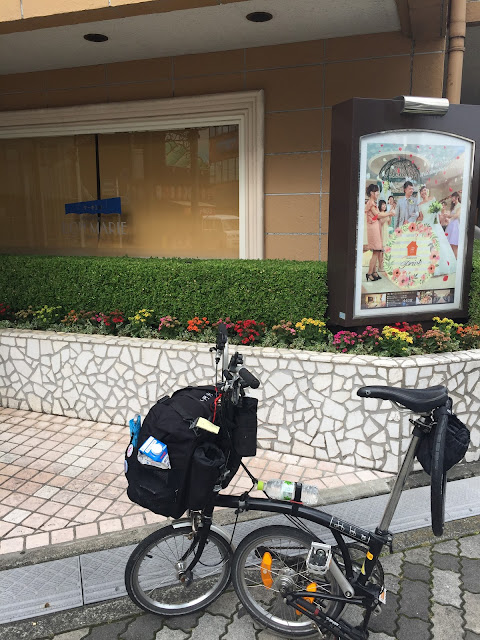 The ride out of Shizuoka was just a normal city ride. I however did like the part of Shizuoka that is sandwiched between the shinkansen tracks, the Tokaido main line tracks and the Tome expressway. It was a strangely quiet place for so much transportation going on in its surroundings. (km 4 to 6 in the Garmin map).

Close to Mochimume station on the sea, I passed these sieves where gianchetti were drying in the wind. 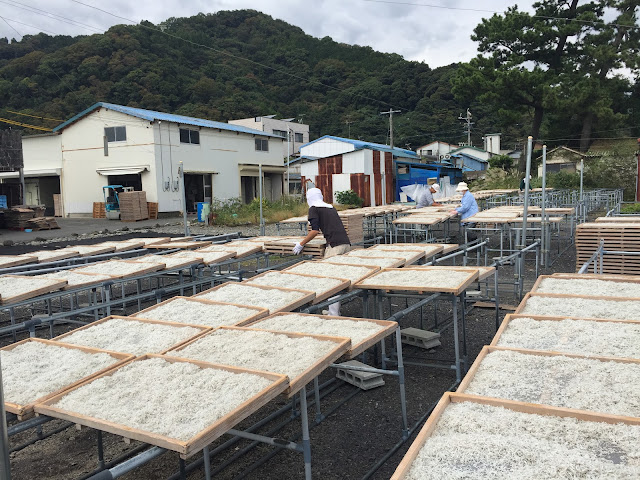 Shortly after it got up the one and only hill to speak of for the day. From there supposedly there should be a nice view of the Fuji, but this was the nicest I got: 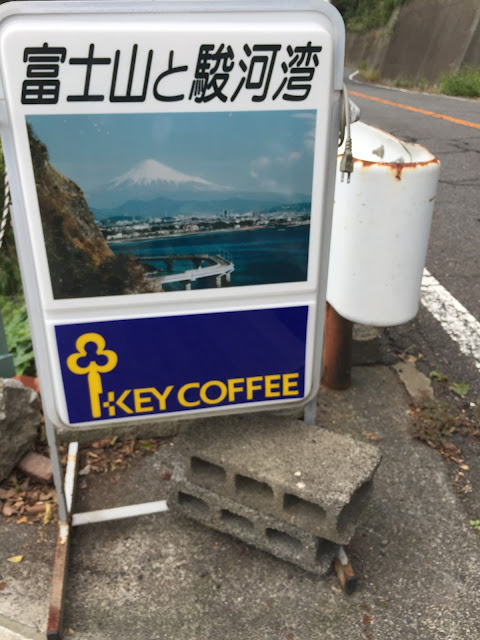 Well, not really true, once I got down again, after crossing this bridge built above the ocean... 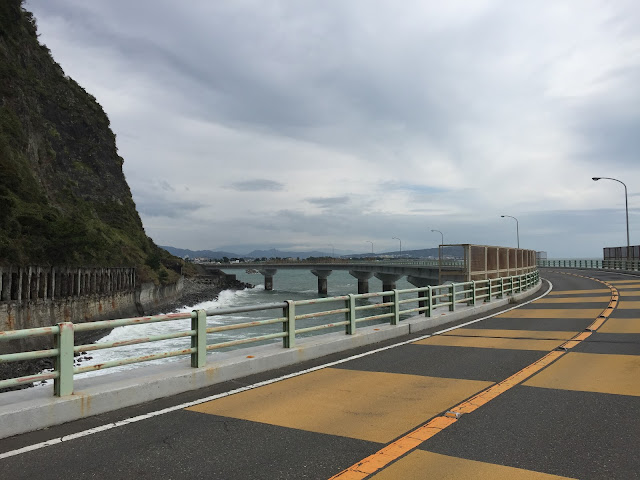 ... I had a few more glimpses of the Fuji. They were kind of slightly better in real life than on a photo though. 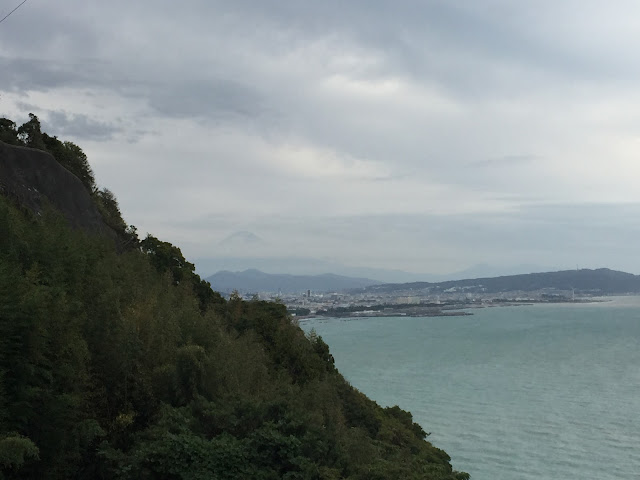 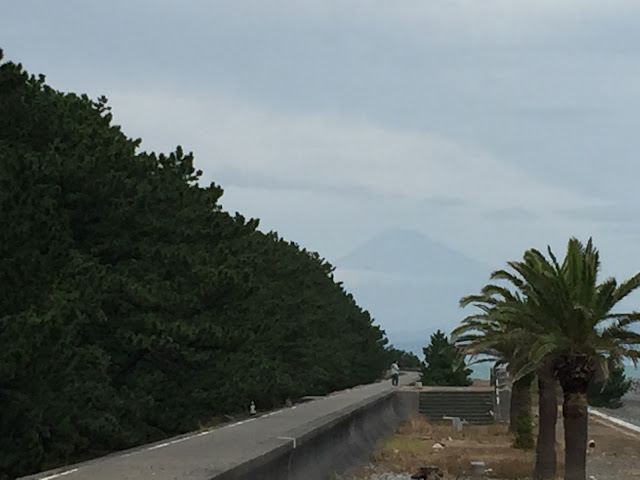 As I knew that there should be this Pacific Ocean cycle road, I searched for it close to the ocean. And from km 19 (to km 27, see Garmin below) I found a very nice cyclable path on top of the dike. This was also one of the best stretches were actually to see the ocean, because in many other parts, one is behind this dike, so no few. 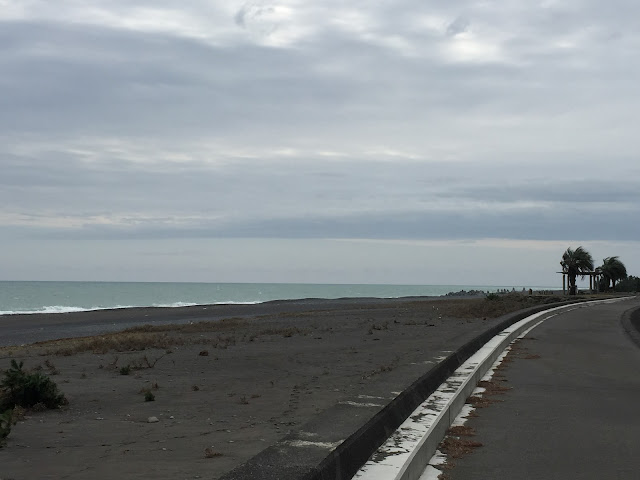 In order to get on this dike, I had to go through these chains a few times. Wonder what these kanji might mean. Probably "perfectly cyclable" ;-)

After crossing the Oigawa the dike did not continue to be cyclable, so I just road on normal, but minor streets through the local industrial area. As it is so low lying, they had built an evacuation platform in the middle of it, and just for added safety a small shrine for the good of the waves besides. 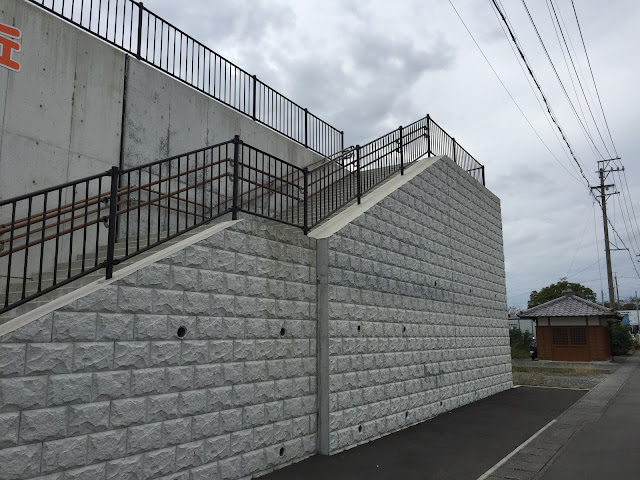 As I crossed this industrial part of Yoshida city, it was exactly 12, and some of the factories sounded their noon alarm. One used the "Yesterday"melody.

From km 43 - 44 I found an other road right on the ocean. So much on the ocean, that the typhoon yesterday had buried the road most parts of it (but not the bicycle lane on top of the dike). 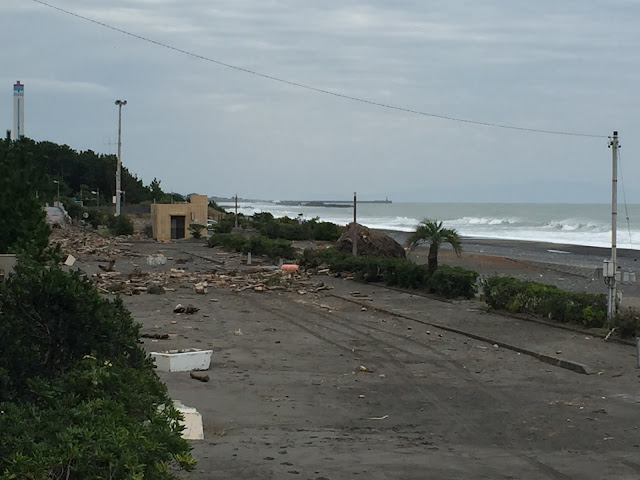 After a failed attempt at km 46 to find a continuation of the dyke (now also the bicycle part was well covered by debris)... 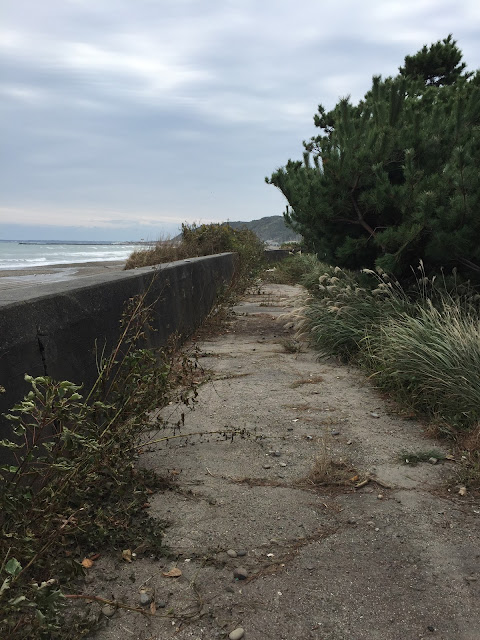 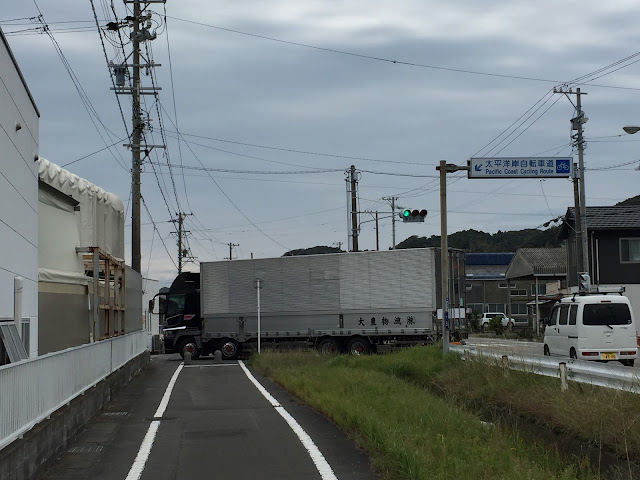 It had a feeling of an old train track, but I wasn't sure. And I lost it again at km 50.

But I found it again at km 54 (probably it had started again already a little more back), and after some more riding on it, it was now clear that my suspicion was correct: 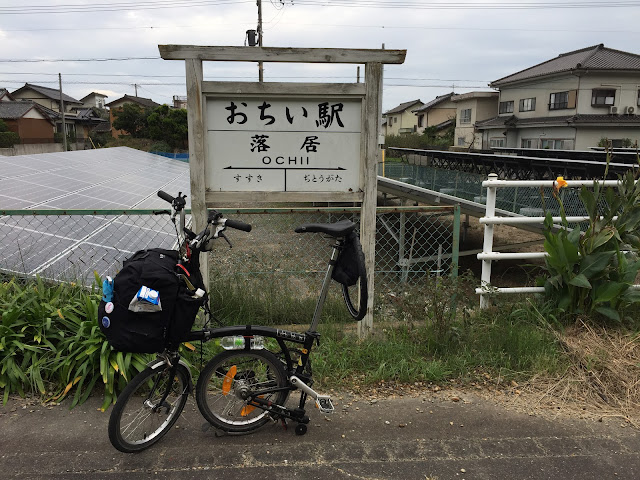 This part of the cycle road did ride very gently through the landscape behind houses, and no longer so close to the main road as before. So this part was really very enjoyable, but I lost it again at km 57.

The strange thing is, that every now and then along the cycle path there are huge maps, but they are all not very detailed and seem not to know of the next part of the cycle lane. Here two examples.

Example 1 has the cycle road where one is currently (the pink part on the right is labelled cycle road), but it shows that it ends at the next bridge, which is actually what happened. It doesn't show, or at least not clearly, that it re-starts soon after. Now having passed through it, I recognize that the second stretch of pink road is the continuation... but a label would have been helpful: 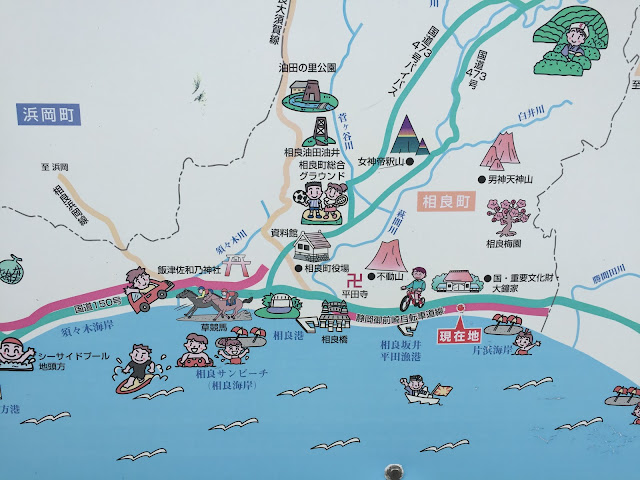 Example 2 has just some roads on it... which one of those indicate the cycle path remains mysterious. 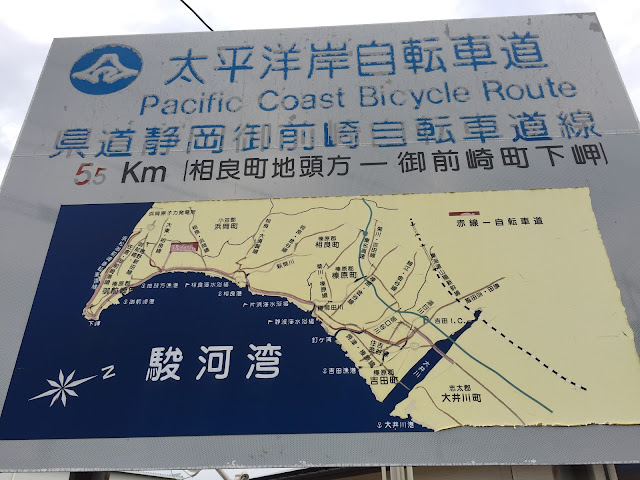 And example 3, while more detailed as the above sign boards, is fixed at several meters above ground, but uses the print size of telephone book on the map. 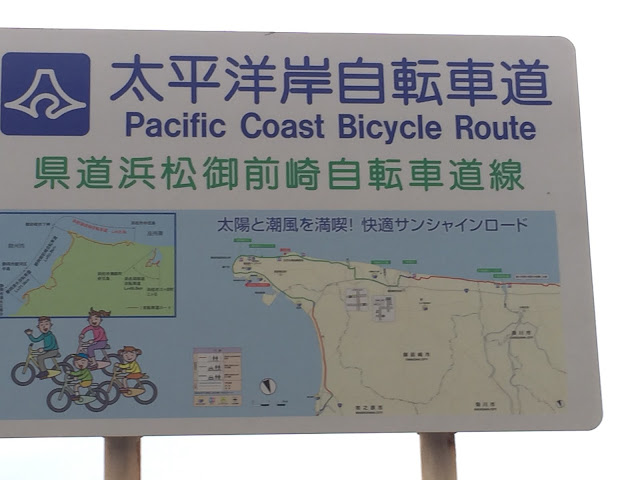 But, I was not easily discouraged. After loosing my second stretch of they cycle path at km 57 (or maybe it just went to a different place, where I did not want to go), I road down towards theOmaezaki cape. The roads to it were actually quite void of traffic, so no problem at all.

Shortly before reaching the cape I came through this "Eco park", or at least that's how it was called officially. I am still wondering what it is, but it was a big park full of strangely arranged, out of use building material. 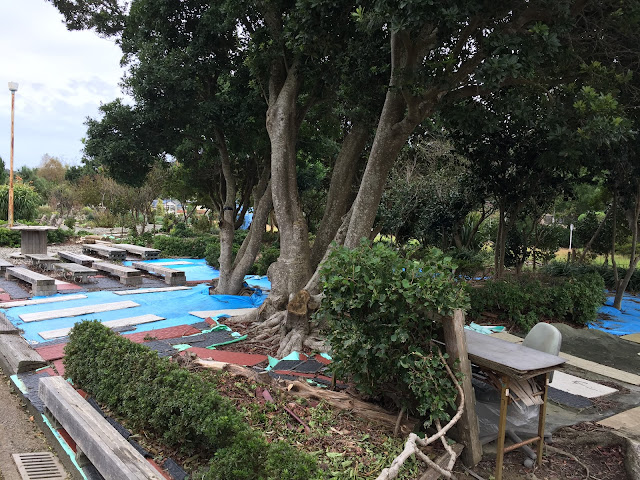 But definitely designed as a park, with ways, descriptions of the plants, suggested round way through it... 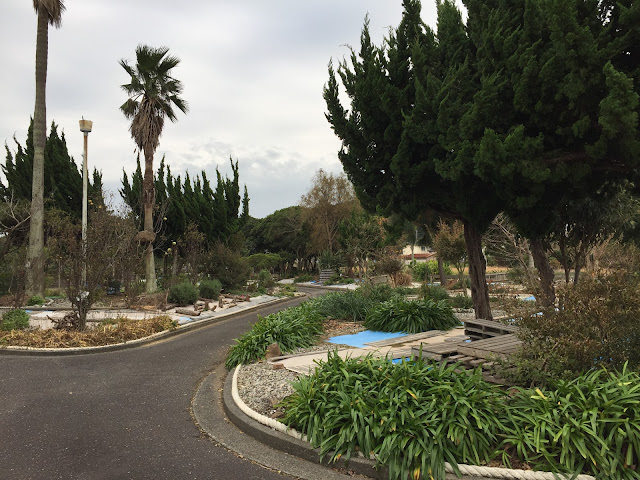 Well, I pressed on to the cape, which was storm-tossed. 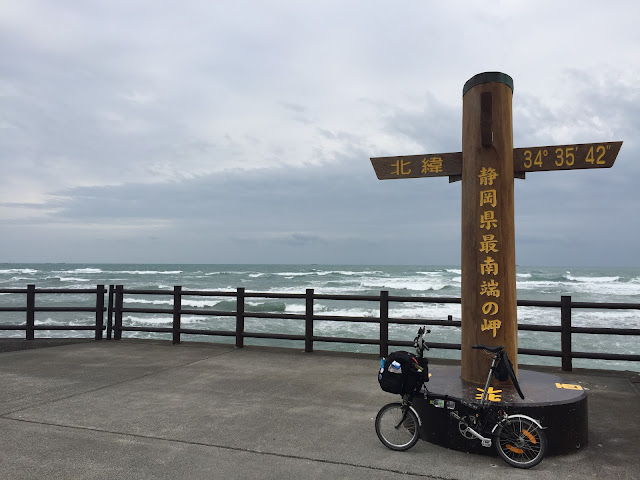 And here also the third part of the bicycle lane started again, BUT I did not take it. It was essentially just a pedestrian walkway named as bicycle lane, but neither very wide nor well maintained. And at the same time the road alongside was very quiet with hardly any traffic. 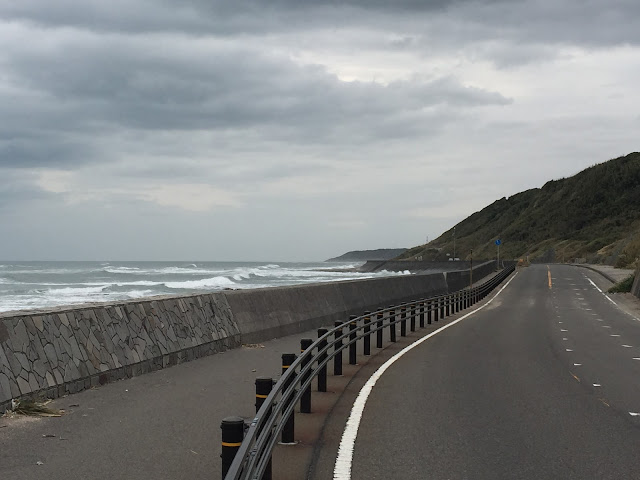 On the left, behind the rails the "bicycle lane" a bit further down, and below an enormous sign claiming it a bicycle road, I found this stretch: 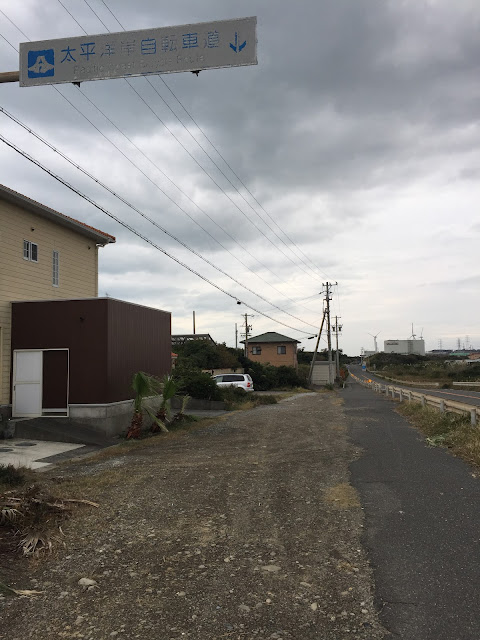 But as the road was good, not a problem.

Shortly after I veered inland, to my very down-to-earth hotel for tonight. I did book it without breakfast, as breakfast time is 6:00 - 7:00 only. Looking at the cars in the parking lot, I think it is mainly for workers of the nearby plants, including probably the nuclear plant, which is less than 2 km from where I am now, sitting in my spacious, warm, but simple room. 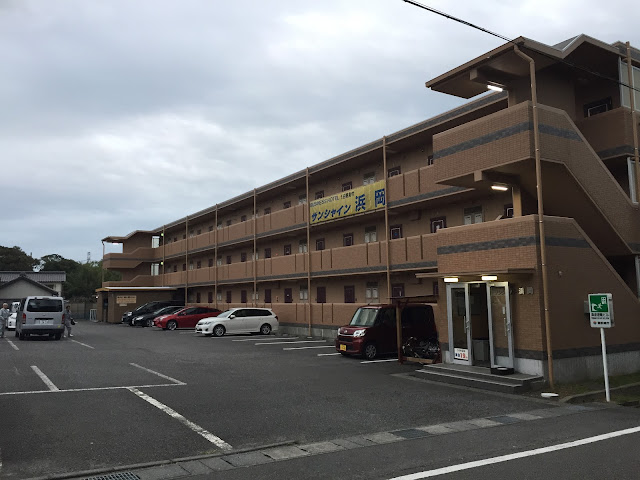 
For details on the bicycle tour today in Shizuoka, partially on the Pacific Coast Bicycle Route, checkout the below maps: