On the last but one day of this trip through Japan, only little cycling, but a very Japanese highlight, Sumo at the Fukuoka tournament and also my last onsen soak of this ride.

After 56 days cycling through Japan I finally made it to one last highlight of this trip, the sumo tournament in Fukuoka. I had tried earlier this year to get tickets for the sumo tournament in Tokyo, but although I went to the internet page about 30 min after the pre-sale started, the page did not work, phone did not work either and by the time I was in a conbini (that actually was not to far from where I was at the time), there were no seats anymore on any weekends... and I didn't want to take a day off, "just" for watching sumo. So when the tickets for the Fukuoka tournament started pre-sale in early October, I immediately went ahead and got my ticket for today, a Tuesday.

On this day with perfect weather, I left my dear brompton outside parked below the sumo wrestlers flags and got in Fukuoka International center for a full day of Sumo fighting. 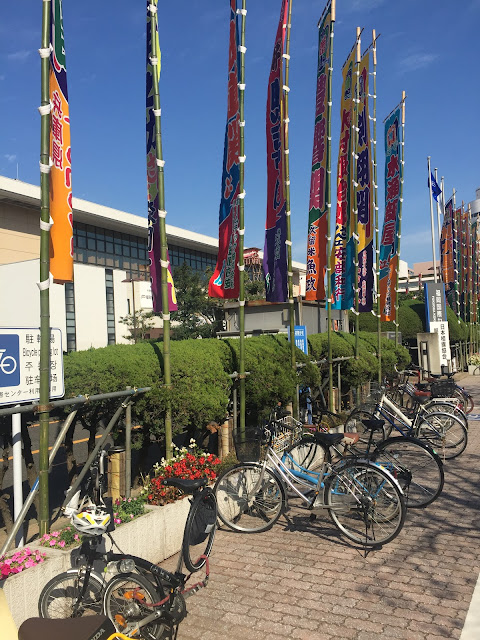 Sumo is organized in different grades but during a tournament day all grades fight. Starting in the morning with the most junior devision and then scaling up little by little to the more senior and up to the maximum division. When I arrived, not terribly early in the day, but still hours prior to the first professional league match, only a few people were already inside the hall, as one can appreciate from the pretty empty ranks. 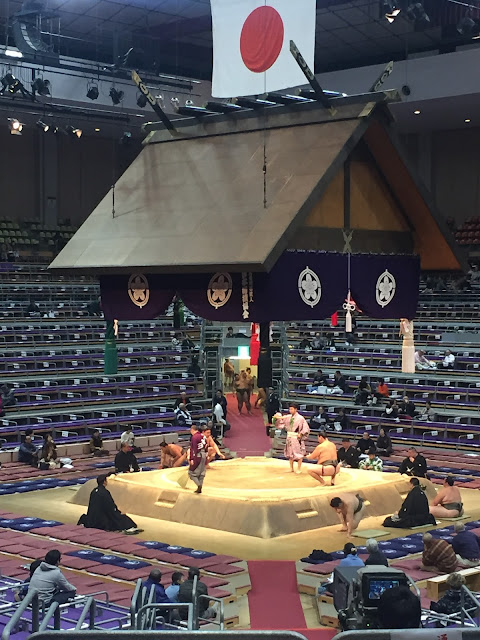 Between the 6 different sumo divisions there is not really a noticeable change or a break, but little by little more spectators arrived and also the sumo wrestlers got more ceremony. E.g. the typical gesture of throwing salt into the ring, only started at the Juryo division (the second highest). Below that much less ceremony. Not only the sumo wrestlers themselves get more and more colourful (from uniformly greyish mawashi for all, to individually and colourful mawashis in the high divisions. Also the sumo judges get longer and more colourful robes as the day progresses.

Every now and then between the bouts the ring would get newly watered and swiped and after most fights there was at least some cleaning of the ring. 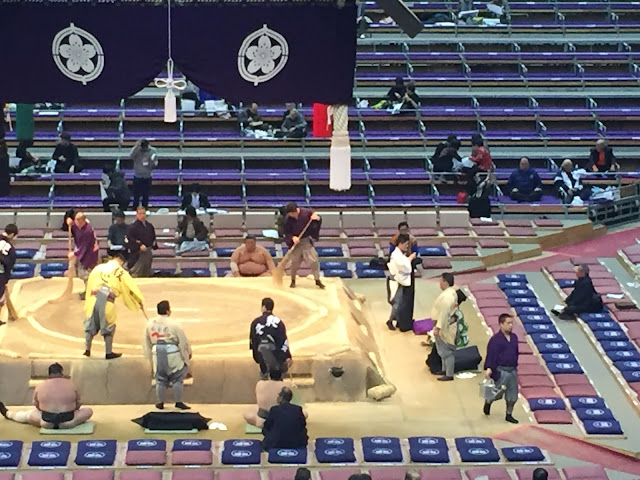 After a few low rank fights I made my way back to the atrium, to get a bento box and was right in time to see the arrival of a few of the highest ranking sumo fighters. A lot of people (maybe even more than inside) where waiting in the atrium, educatedly behind a yellow line on the floor, for their heroes. Who swept through quick paced with their helping junior sumo wrestlers behind them, carrying their belongings. 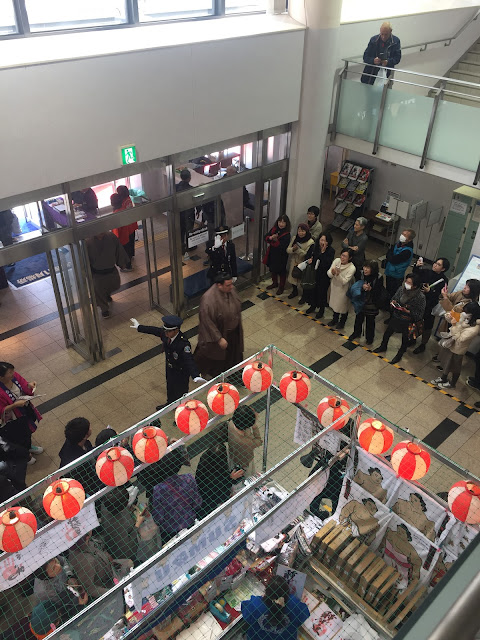 I had my bento on my seat and after some time the higher divisions started. There was even this colourful entry ceremony of the Juryo and Makuuchi division. Here of the Juryo:

In order that there is only minimal waiting time between the different fights, the next two wrestlers already sit along side the ring waiting for their match. In the highest division only, they get their personal cushion, brought in by one of their junior sumo wrestler-helpers.

Although the time to wait for the next sumo wrestler to enter the ring is small, the wait for the match to actually start gets longer from Juryo, as wrestlers do more and more ceremony. Here an entire match from first entering the ring to the actual match:

Here the fight also was actually quite long. Often it is only a few seconds (see the last few seconds of the video below):

Before the makuuchi division started, the reigning yokozuna performs his "entry dance" (for sure there is a technical, religious term for it):

Not after each fight, but from time to time even publicity comes through the ring, but as it is a sacred space, also the publicity is in ancient packing: 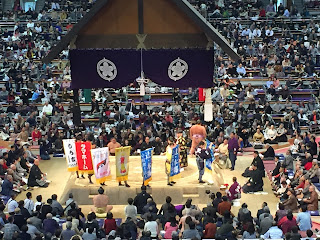 And here the final fight of the day, between Hakuho and Ichinojo, which ultimately was won by Hakuho, allowing him a few days later to win the third tournament this year by 14:1.


After an entire day of sumo, I concluded the day with my last onsen soak on this travel in an super-sento very close to the sumo hall.