Today's cycle tour was dedicated to pagodas and temples, many of them UNESCO world heritage sites.

First of all, here the four pagodas of today... a lot of pagodas, and even more temples. 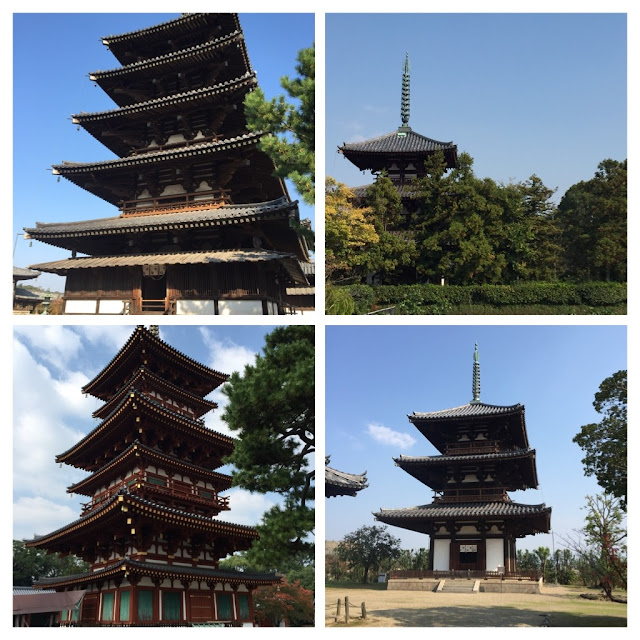 And this albeit I did NOT visit the obvious touristic spots in Nara, as I had been in Nara an entire weekend earlier this year as a stay over from a business trip to Osaka. Instead I headed out West towards Yakushiji area and then down South to the Horyuji area.

The hostel I stayed tonight was really nice so before departure I had a picture of myself taken in front of it. 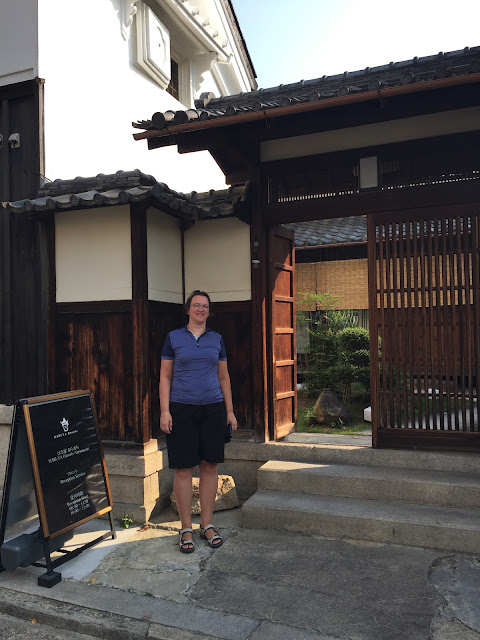 It is an old town house restructured recently into a hostel. Although I don't really know why they don't call it Ryokan. It was very similar to a ryokan, i.e. no toilets and baths in the rooms, tatami rooms... I guess that "hostel" sounds more international and modern than "ryokan". But it was actually much nicer than many ryokans in which I have stayed. The walls seemed to very thin, but everyone was very respectful and did avoid noises, apart the one person snoring in the middle of the night...

After the picture, off into the sunny day to my first destination. Actually when I left in the morning, I had decided to see only Yakushiji temple in Nara in order to have sufficient time for Horyuji and Horinji, but the first temple I came upon was Toshodaiji. And well, as I "stumbled" upon it, I entered, with the decision to then skip Yakushiji...

At Toshodaiji, one of the most important Buddhist temples in Japan (but I read the same later on at an other 2 temples today...) there was the only (?) remaining building of the Heijo palace (the rebuilt site I visited yesterday). It is this long, dark building on the right on the picture below. 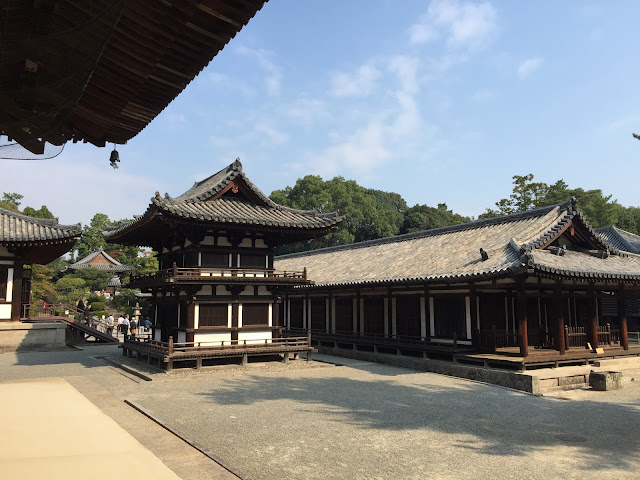 In the times of Nara capital it was a administration building part of the palace, but at some point the government no longer needed the building, so they gave / sold (?) it to this temple. Who took good care of it (and was lucky that it did not get destroyed by some fire), so it survived until now.

I actually liked these temple grounds a lot, very much in the nature, although they are not very far from Nara center, but even the surroundings are very rural already with many nice, old farm houses still remaining. 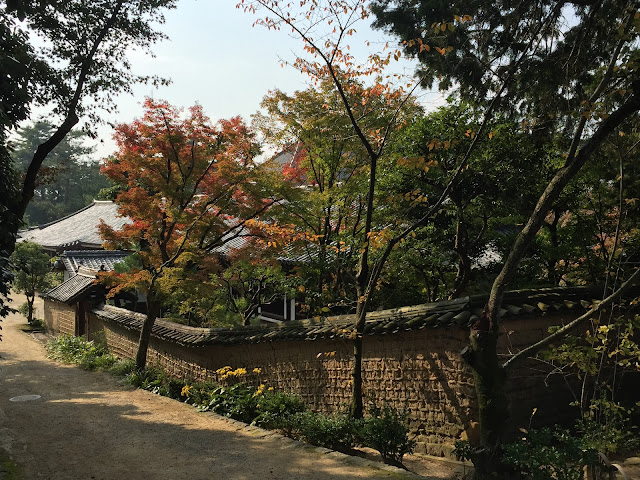 At one point a monk started explaining to a small child the different statues that are worshiped in the main temple, saying that the Buddha sitting in the middle is so important, that he is actually TOO important to ask some favours from him, as it just takes too long for him to get to your petition. So one should better ask any favours to his two "assistants" standing on the right and left. The one on the right (well, left from Buddha's place) is a kind of medical doctor, so one can ask medical help from him. For all other petitions, the other bodhisattva is responsible. This is also the reason why he has 1000 hands. In each hand this statue is holding a different device and depending on what you want, you should ask it to the appropriate arm. (Unfortunately no pictures of these arms were allowed)

I didn't have anything to ask to this thousand armed being, so I went on to my second temple of today, Yakushiji... I know, I said above that I had decided not to visit it... but how could I pass by one of the oldest temples in Japan? And here was pagoda number 1 of the day. (Actually also pagoda #2 was here, but this currently is under renovation and hidden behind scaffolding, so does not count.) 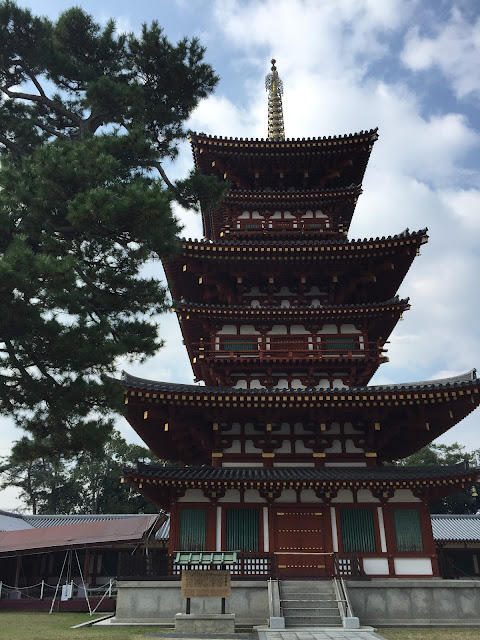 I have to admit that apart from the pagoda I did not specially like this temple. It was curious though how much the Buddhas of this temple seemed to like egg. The first Buddha I met had parcels upon parcels of raw egg standing in front of him. The next Buddha seemed to be a bit more picky in his tastes, and got the eggs already transformed into tasty cakes. But also in Buddha-typical quantities. This maybe also explains why Japanese Buddhas are fat (see below for distinction from Indian influenced Buddhas). However seeing the fact that this temples is called 薬師寺 (literally: pharmacist temple), it would seem that eggs per Japanese believes are good for health.

Then I got onto my brompton and off towards my main goal of the day, Horyuji. As always I had planned my route using as little of the major roads as possible, which today lead me through fairly small roads which would have been impossible to find otherwise, through the country side. 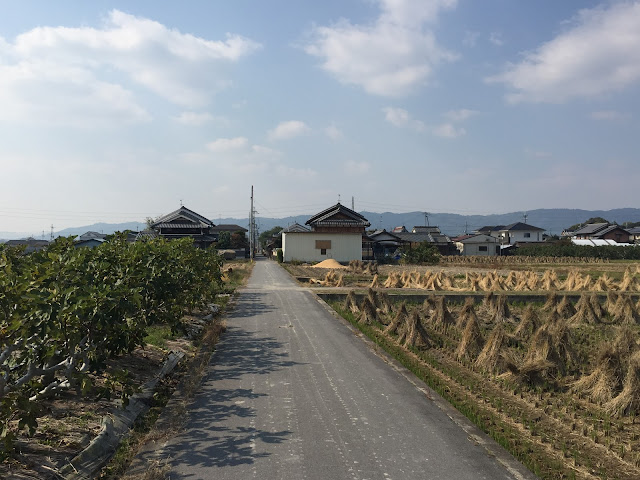 At some point I crossed these fields  filled with water, and no, these are not rice paddies, but instead goldfish breeders: 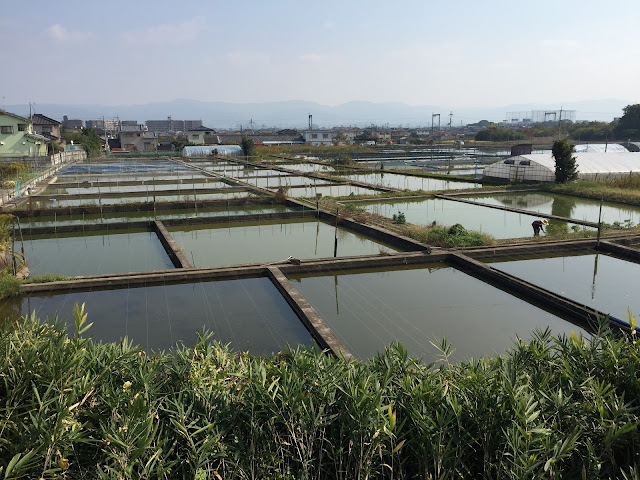 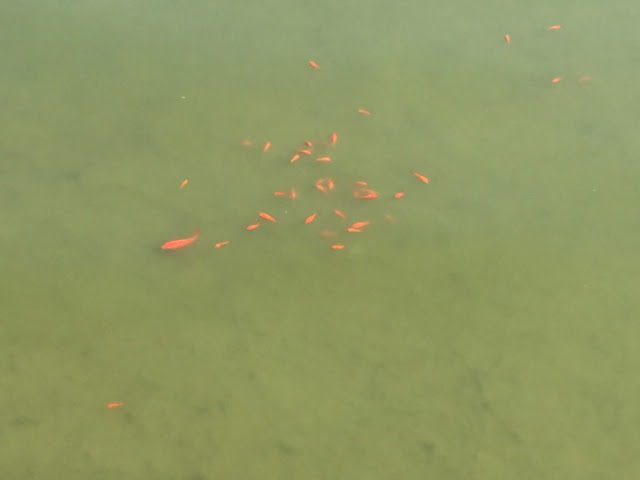 In and around Nara, there are so many things to see, that I have passed by this castle without stopping any longer than it took to take this shot straight through the train line: 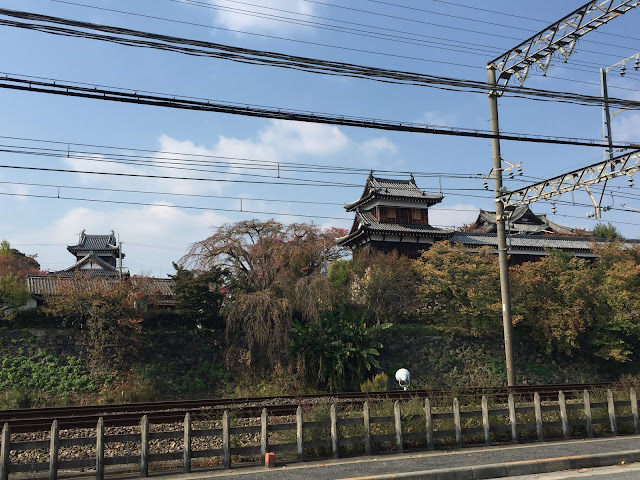 Shortly before reaching Horyuji, however my determination of passing by possible sightseeing spots got challanged again, by pagoda #2 of the day:

Mostly for koyo it is still too early, but on this picture I managed to get at least a bit of autumn flavour added.

Shortly before this temple also a bicycle lane had appeared out of the blue. The next "stop" on this bicycle path was Horinnji 法輪寺. Now, how could I not visit a temple with the kanji for "cycle" in it. Compare the 2nd kanji of  駐輪場 (bicycle parking lot) to 法輪寺 (Horin-ji temple)! 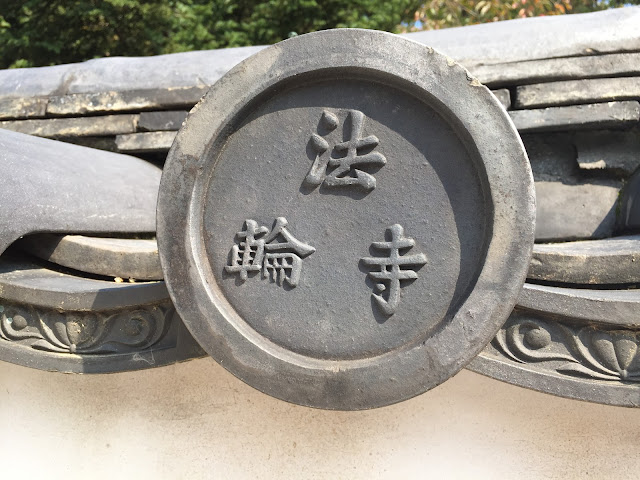 And here it was, pagoda #3 of the day. Here a picture from a bit further away, so you can also see the kaki fruits in the foreground. 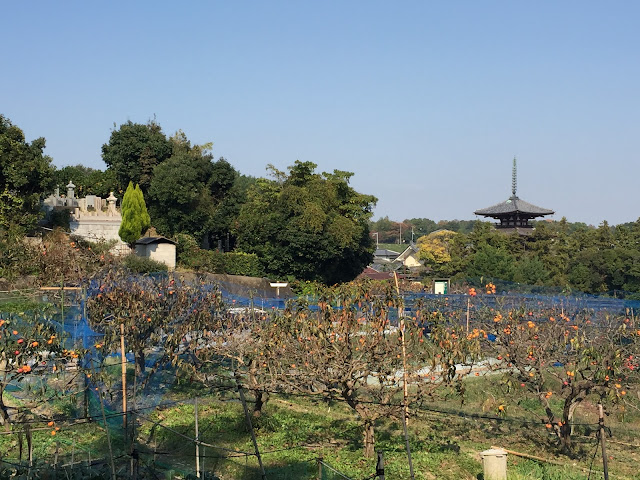 This temple was actually pretty small, but with the "rin" 輪 in its name and the pagoda, I visited it.

The next and final touristic destination today was now finally Horyuji, UNESCO world heritage site and an enormous temple complex. Before entering I had lunch, Curry-rice, in a cafe between the two parts of the temple. This cafe could also have been in Daikanyama... but it was here in Horyuji. This potato grinned at me from the top of the curry: 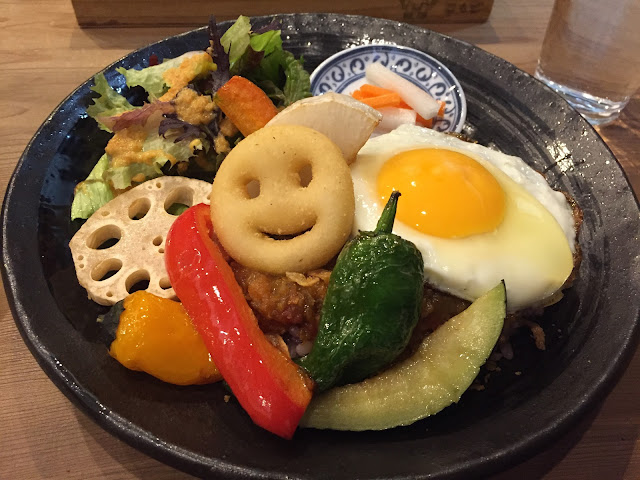 With new energy I commenced the visit of the vast areal of  Horyuji. It more feels like an entire village than a single temple and it is packed with national treasures, and obviously sports yet an other pagoda... the last of today: 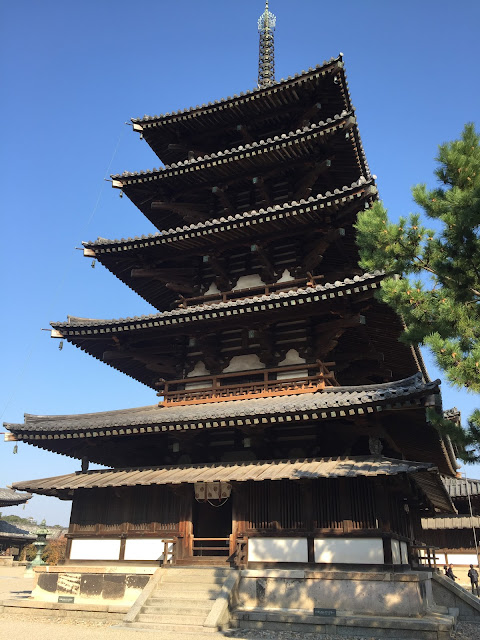 However one of the main attractions, the oldest wooden building in the world, was currently undergoing reform. But there were more than enough other buildings to see. Including some of them (eg the pagoda above and the main temple right behind it, still from the Asuka period (538 to 710).

In one building there is also one of the oldest Buddhas in Japan, which is still a slender Buddha, very different from any other Buddhas we see now in Japan, which are all quite round. This one here was really thin and supposedly more like an Indian Buddha.

I finished the visit around 15:00 and then continued my journey of today onwards to Yamatoyagi. This time Garmin had found a bicycle lane, which was following a river. At times it was great at times it was just okay, essentially because the asphalt or sometimes gravel was a bit hard to ride in some places. But overall it seems that in and around Nara there are quite a lot of bicycle lanes and they are even indicated relatively well: 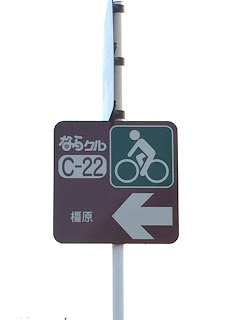 And then I was already at my hostel for tonight. Again in a refurbished old town house. I have got an enormous room, and after some considerations what to do tomorrow/the day after tomorrow I have decided to stay two nights here.

Today in the evening I also went to a local sento I was recommended here by the lovely owners. 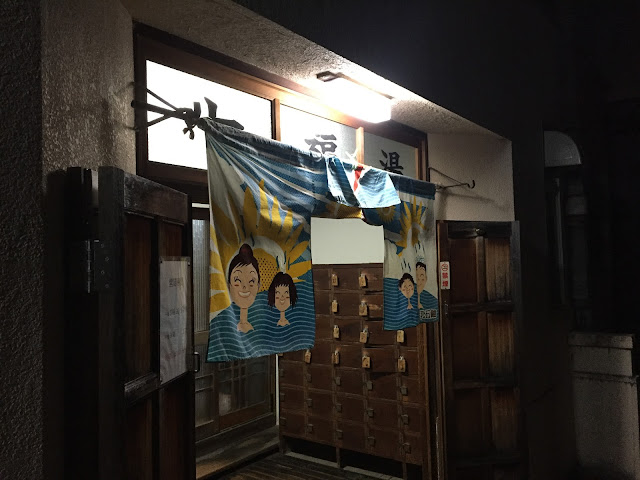 This sento was also very traditional and probably nothing, including the owners and other guests, changed in the last 50 years. I specially found the hair dryer interesting: 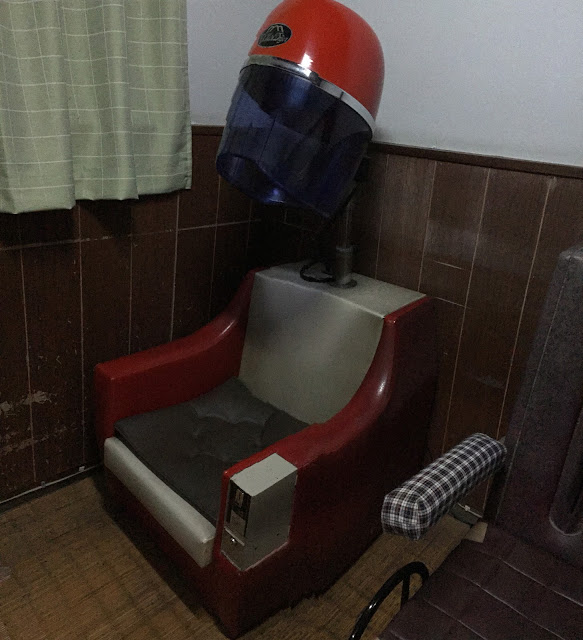 Well, this excursion in another century, concluded my historical day.

I also just made a very useful discovery: Garmin actually IS capable of downloading new courses automatically without plugging in the device into the computer. Strangely I had never noticed this before and had quite a number of "fights" with the Garmin device to connect it properly to the computer to download a new course. But tomorrows course, which will be around Yamatoyagi only, has been miraculously self-transferred. Useful!

One other thing of Garmin that I have not yet understood, is how to see if there are bicycle lanes or not. Sometimes when I ride I see on the map (downloaded from openfiets map) a red line on a road, which seem to indicate a bicycle lane. But when planning the tour, I don't see it in the planning tool (probably because that one uses Google maps instead, who does not know about any bicycle lanes in Japan).


For details on the bicycle tour today in Nara, checkout the below maps: