Day 42 - Roundtrip through the cradle of Japan - 大和八木の巡り

Today's cycling tour was through the cradle of Japan around Asuka and Sakurai and I finally saw some reasonable koyo... but still a bit early.


Today my trip lead me to the historical roots of Japan, it included a trip to the oldest temple (grounds) in Japan (596 AD), the oldest Buddha statue made in Japan (609 AD), a shrine dedicated to Japans first emperor (660 BC) and the Kannon statue that has been used as basis for most others in Japan. And all this in the region around Asuka, where Japan originated, before settling onto Nara as the first stable capital back in 710 BC.

I had a quiet start in the morning and as first destination made my way up the valley to Hasedera.

When I originally had planned my visit to the valley around Nara, I had planned to visit Hasedera coming from Ise, with the idea that this way I did not need to ride up the valley. Well, actually it wasn't that bad. I had a nice country/village road for most of the time and also the ascent was very gradual except the last very few meters.

Up to the temple I went through this covered passage: 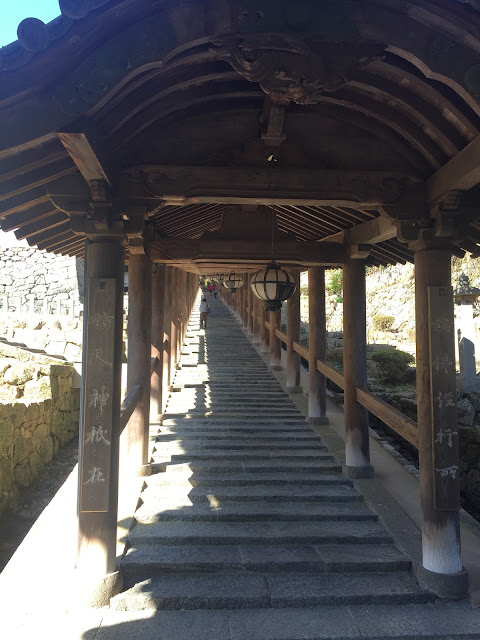 I started with the visit to the Kannon statue, which is the 8th pilgrimage point on the 33 temple pilgrimage through Kansai. So people were very enthusiastically praying, while I did my silent touristic visit. What was great is that one could access to the feet of the Kannon (stroke them) and then surround the Kannon, so I came really up very close. As the statue is 12 m tall it is towering over you.

After the visit to Kannon, there is still the entire temple with great views over the surrounding mountains. 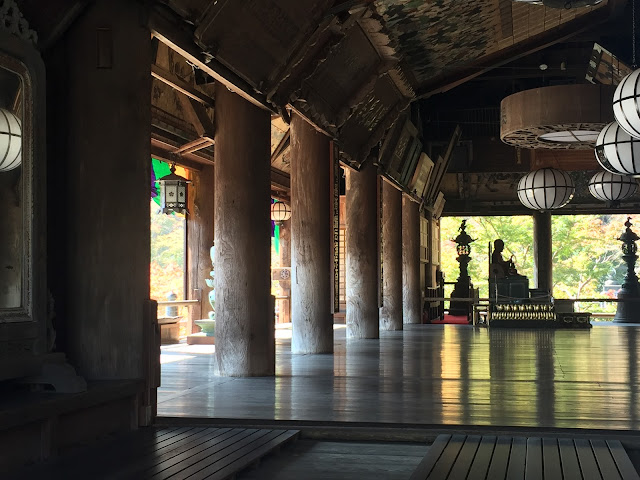 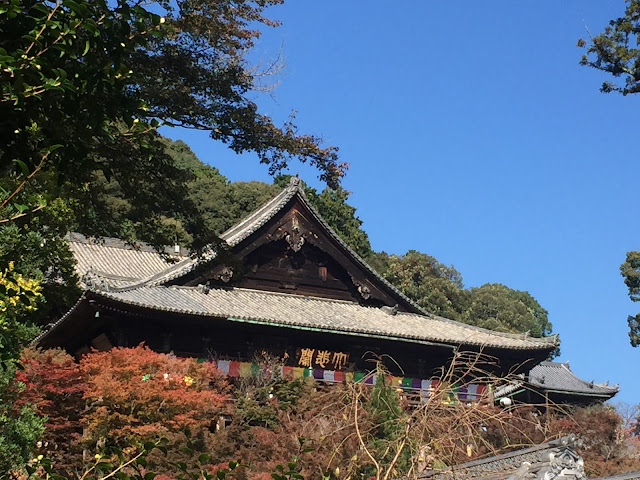 There was some koyo already, but overall still to early! 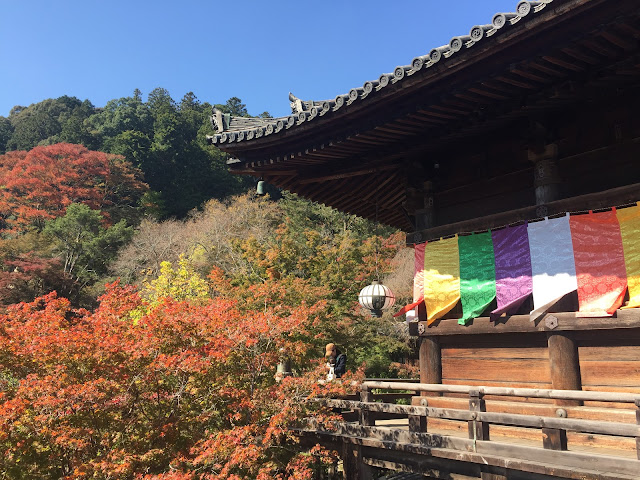 Here was also the one and only pagoda of today: 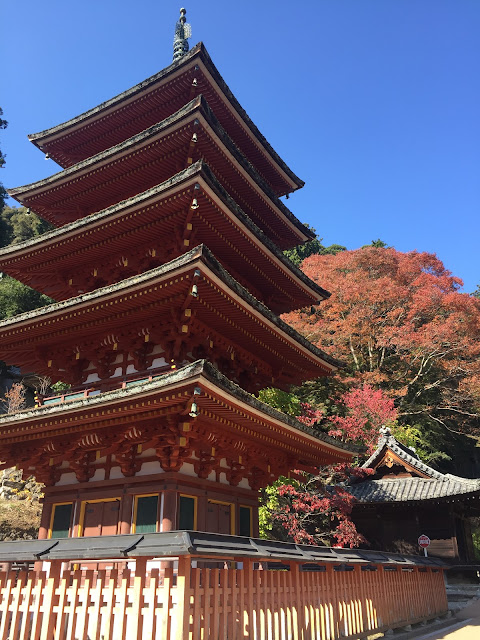 Coming up the stairs I had seen that there was a place to get some matcha and Japanese sweets, so I had a second breakfast here: 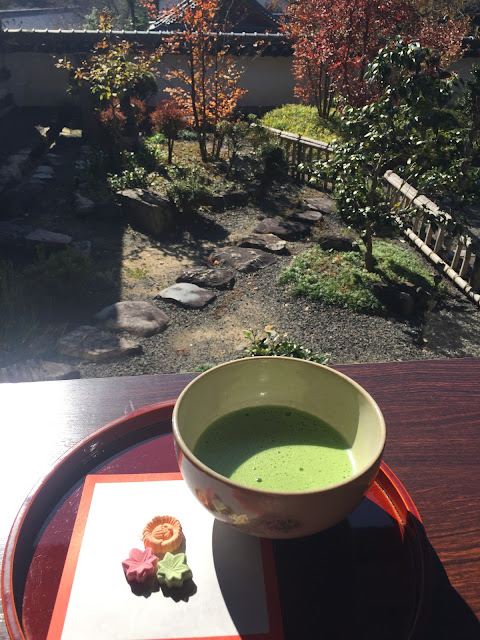 I really enjoyed this temple, its relaxed atmosphere, the nice landscape, koyo and the spiritual experience getting so close to a highly venerated Kannon.

After this relaxing visit and a good soup lunch at a local restaurant, I returned to my bike and rolled down the hill and on to Asuka through the country side. In the villages here around Yamatoyagi there are still a lot of old houses, mainly in good shape attesting to the wealth of their current owners. Tomorrow I will go and see an entire small city center which seems to be still old, but even today just riding through the countryside there were many nice streets with old houses. 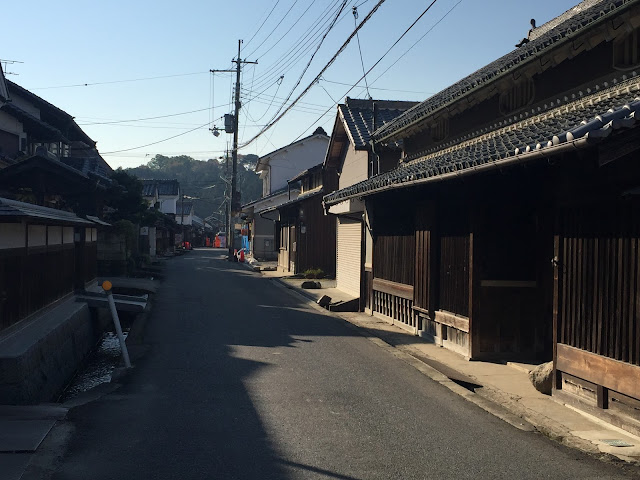 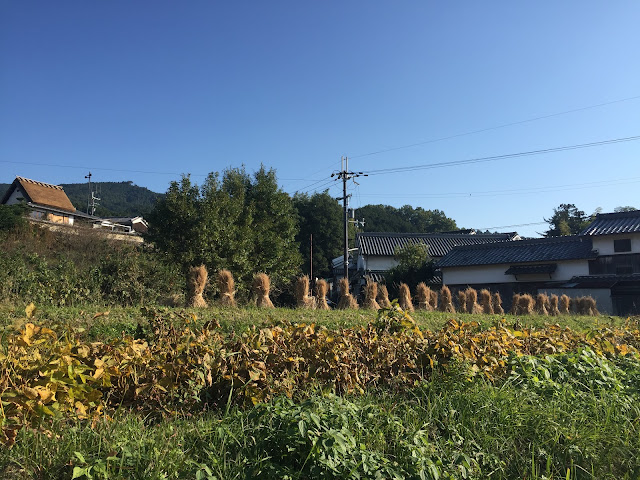 Close to Asuka temple also a bicycle lane started. As yesterday, there is good (well, good in Japanese terms where there is often nothing) signage for these lanes. It is Japanese only (or mainly) though. It also seems that the city of Kashihara promotes cycling strongly, as a good number of the visitors had come on rental cycles and there were big cycle parking lots available. Today the area around the temple was not very well visited, I think because the two museums on Manyo culture and the archaeological museum were both closed due to Monday.

The Asuka temple is actually quite small and would just seem to be a very normal, smaller temple. The buildings are not specially old either, but the Buddha inside is the oldest Buddha statue in Japan, cast in 609 BC. Yes, "cast", because it is not a wooden statue, but rather one made of copper and gold. 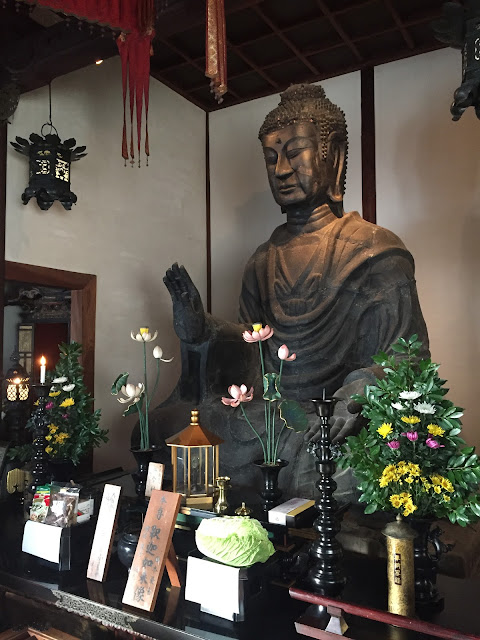 Looking at the offerings he got, he seemed to prefer a very healthy diet with a lot of vegetables. (In the plastic bags on the left are dried mushrooms). And he definitely maintained a slimmer figure than the two Buddhas yesterday that indulged in eggs. But not as slim as the Indian-inspired Buddha in Horyuji, also yesterday.

The temple itself, while not spectacular, lies in this very nice, slightly undulated landscape: 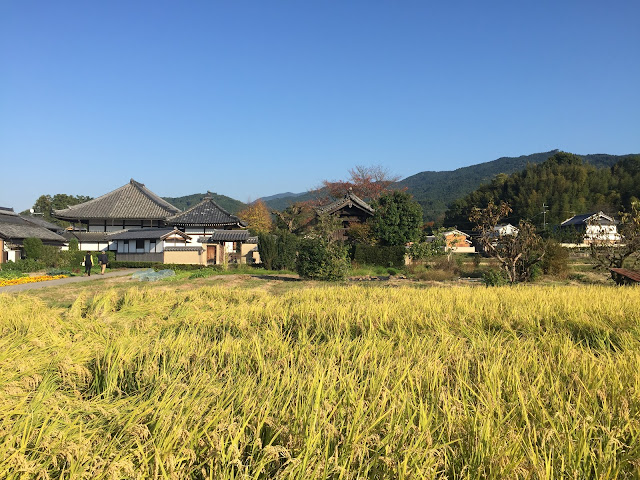 The last sightseeing spot for today was the Kashihara shrine. While itself only slightly above 125 years old, it does enshrine the first (mythical) emperor of Japan, Jimmu, who it is said ascended to the throne exactly where during the Meiji time some 2200 years later, this shrine was built. 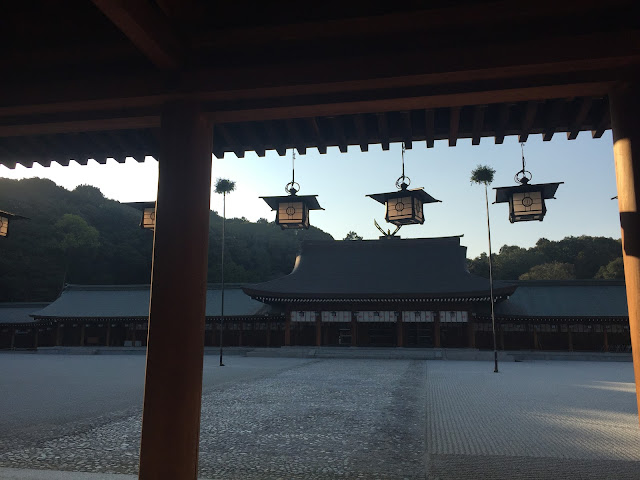 The shrine itself lies in a big forest-park and is very somber, but was brightened up today by a few colourful clad children that had come with their parents for the 7-5-3 matsuri.

When I planned out the trip yesterday, I had one more destination in mind, Imaicho, a historical quarter of the city where I am. But I wanted to finish today in relax, so left this for tomorrow. I did however ride through it tangentially and was impressed. Tomorrow also the museum house will be open, so perfect timing.

After the two traditional sentos yesterday and the day before, today I decided for a modern super-sento, not too far away from my hostel. It was quite nice with 3 rotenburos plus one "lying rotenburo" (i.e. you can lie flat in the water which only covers you half, so you can enjoy the hot water and the cold air at the same time). I essentially spent the evening there, soaking and then having dinner.

Tomorrow Imaicho and then off to Osaka and good bye to Nara prefecture.


For details on the bicycle tour today in Nara, checkout the below maps: