Day 38 - Tokyo to Maibara and on to Omi Hachiman 東京から米原経由で近江八幡へ

Back on the road again for my final 3 weeks touring Japan by bicycle. This time alone the shore of Lake Biwa to Hikone visiting the castle there.


Back on the bike after a few days in Tokyo, for the third and final leg of this bicycle tour through Japan!

The day started early. Very early, in order to catch a 7:40 shinkansen from Shinagawa station to Maibara. I must have come through Maibara already a lot of times, going by shinkansen to Osaka, but never got off the train anywhere close. A short ride from the station, there it is, Lake Biwa! The biggest lake in Japan and today with a little bit of mist over it under the blue sky also a very nice lake. 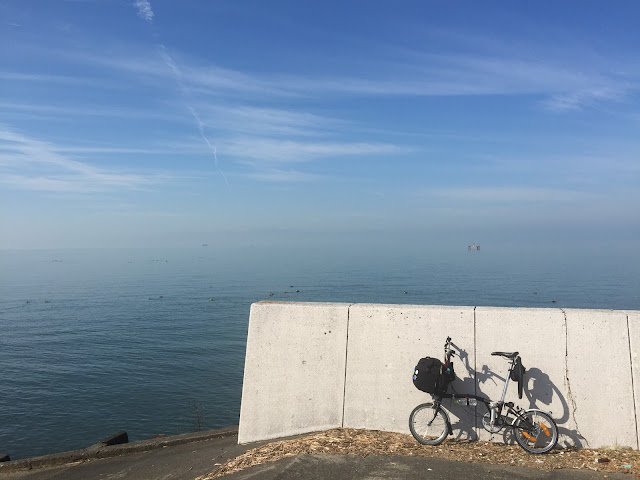 Along the shore is a bicycle path, which however in some (but not all parts) was covered in debris. Not sure if this is due to one of the two recent typhoons. 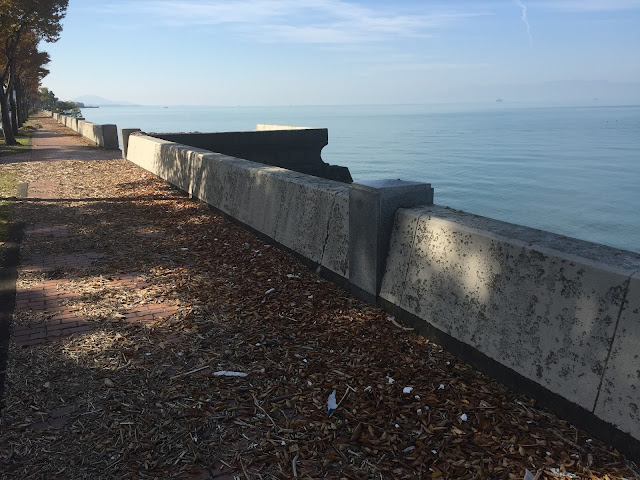 Maybe yes, as further down the road there was an entire row of sakura (cherry) trees uprooted.

I have been mainly riding on the bicycle path (where it was technically possible), as the road on the lake is quite busy. And on the bike path one is the closest to the lake.

After a few kilometers, I came to Hikone castle, the highlight of today. 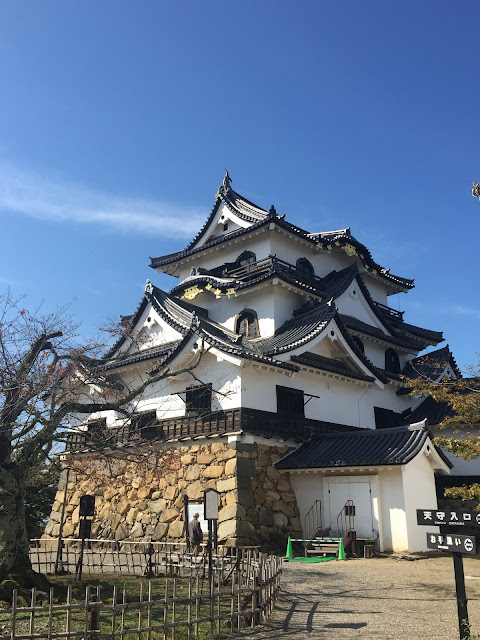 With 11 others, it is one of the 12 surviving original castles in Japan. However before visiting the castle, I actually went to the garden, as that was the part I encountered first on my ride. With a view of the castle in the distance. 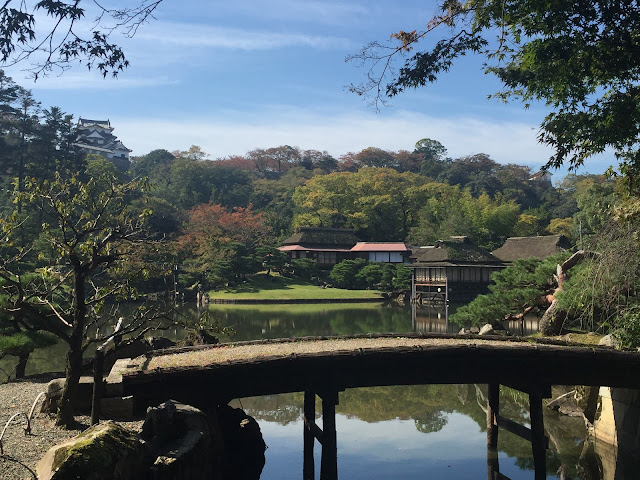 Both ticket sellers (at garden and castle), seeing me arrive with my bicycle stressed that I should take the luggage with me and not leave it on the bicycle. Well... I only brought the valuables with me. But when I came back to the bike, there had been thieves! Completely in black. I still saw them, but their escape was too quick. I even managed to take a picture, but figured that going to the local policy station would not be very helpful. Who'd ever believe that someone black could be a thief? They even left traces of the robbery behind: the wrap of at least 3 Okinawa cookies I had brought with me from Tokyo!
Here the picture of the suspects:


Unperturbed by this theft, I continued on my visit to the castle, which sits very scenically on top of a hill in the flat lands around Lake Biwa. 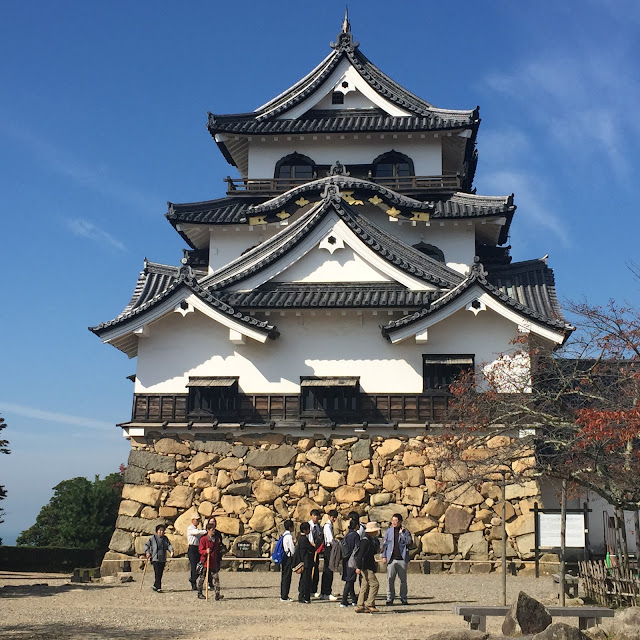 Seeing all these small roofs, one starts to understand why Japanese houses nearly always have a total overkill of roofs: 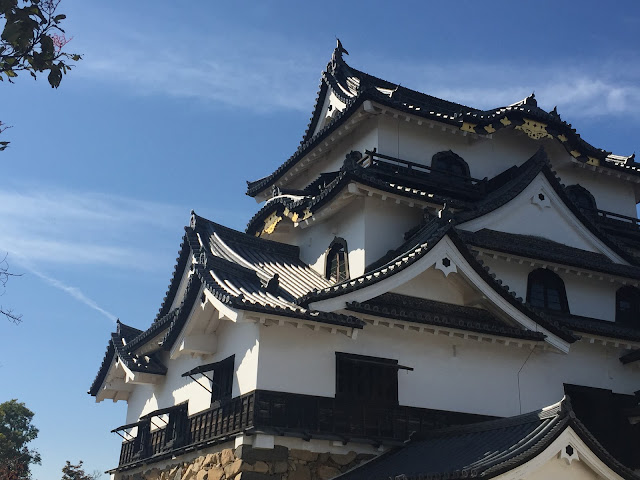 Today must also have been a day prone for school excursions. The entire inner grounds of the castle were occupied by school children between 6 and 16 having their picnic.

I also went inside the castle up the very steep chairs to the very top. But no pictures from inside...

After this relaxed visit I went to the nearby center of Hikone and had lunch. The one street leading away from the castle has been (re)constructed as an old street. 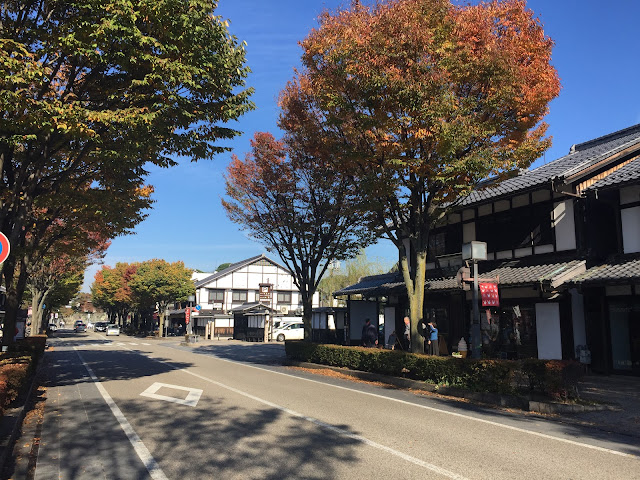 And then back to the shores of the lake and on with my ride. As it seemed that I would have very comfortably time, I took a long break on this quiet bench. 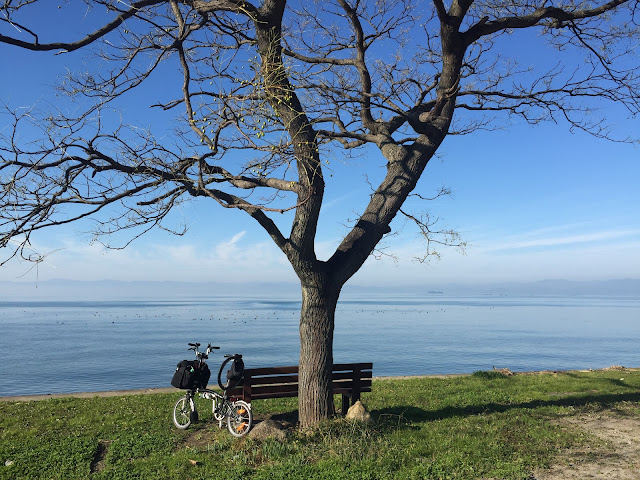 Soon after I turned inland through the fields with view on the distant mountains on the opposite shore. 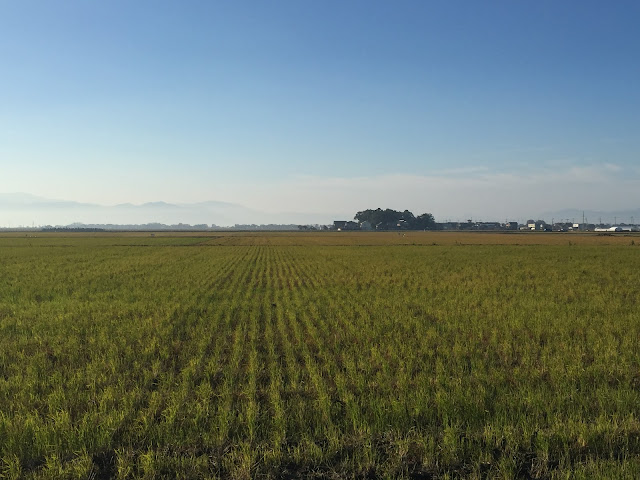 Very shortly before arriving to this huge water wheel (decorative purpose only) ... 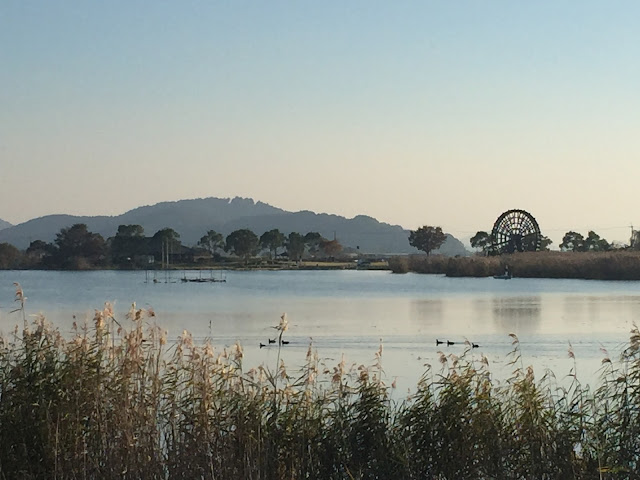 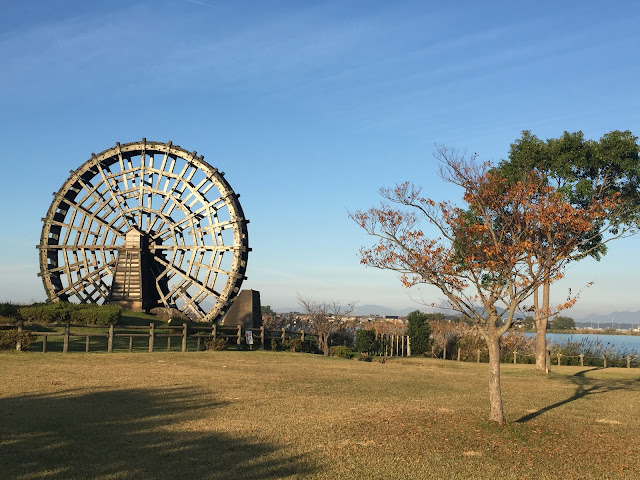 ... at km 27 I encountered a nice bicycling path which I took until km 34. It did continue (but I don't know in which direction). It was a very nicely built up bicycle path, separated from the street and mostly clean. (read: there were only a few stretches with too much vegetation - alive or otherwise - on the path). 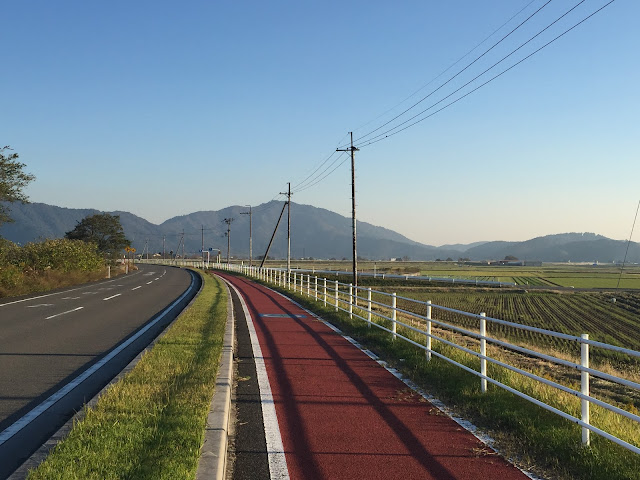 The odd thing with this bicycle path however was that - at least the part I took - is completely useless. It just runs in parallel to a normal street which is a totally quiet street with hardly any traffic. Why would I need a bicycle lane on such a road?

After a very quick visit to the ruins of Azuchi castle (I only looked at them from close to the parking lot), I continued to town - Omi Hachiman. Surprisingly one can really call it "town". So far all the villages I had passed today, even Maibara seemed relatively small villages, but riding into Omi Hachiman I was greeted by the typical ugly outskirts full of big shops, gasoline stations, pachinko parlors... and close to the station my simple hotel for tonight.

I had looked during the day, if there is an onsen closeby, but couldn't find anything on google maps or ゆーゆ my onsen app, but I saw close to the hotel a bus going to an onsen... so I checked again, and well, there is was, down at the lake a newly constructed onsen. What was strange about it, although it is on the shores of Lake Biwa it has no view of the lake. What a pity. But well, I got warmed up and relaxed. Even spent a bit of time in a radon onsen.

Here the Garmin and Strava maps of the touring done today in Shiga prefecture.