This blog post describes the first half of Shimanami Kaido, probably the best cycle experience in Japan.


Today finally the long awaited Shimanami Kaido, a famous bicycle lane over the Seto inland sea and a range of small islands to Shikoku. 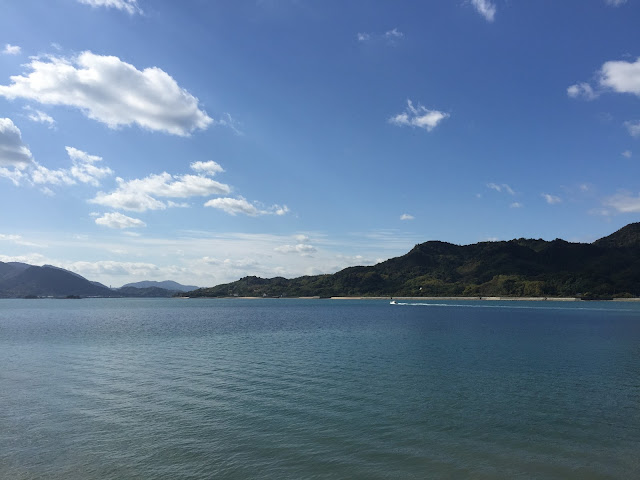 It is only the second time on my entire tour through Japan that I see many other cyclists. (The other area was around Biwa lake). But today it was really a LOT of cyclists, and very mixed. A few cycle tourists, a few families with small children on their bikes, mostly small groups or single men on racing bikes, but also small groups on rental mamacharis or other rental bicycles.

The very first stretch of the road is actually by a very small ferry, just a few meters over to Mukaijima. On the ferry nearly only cyclists, ready to ride the Shimanami Kaido. Due to the fact that there were so many cyclists, it was surprisingly difficult to start a conversation. Well, I haven't really tried, but in many other places where I have come through, by the sheer fact of being a cyclist, I attracted interest. In a place where everyone is coming by bicycle, this was obviously no longer interesting. 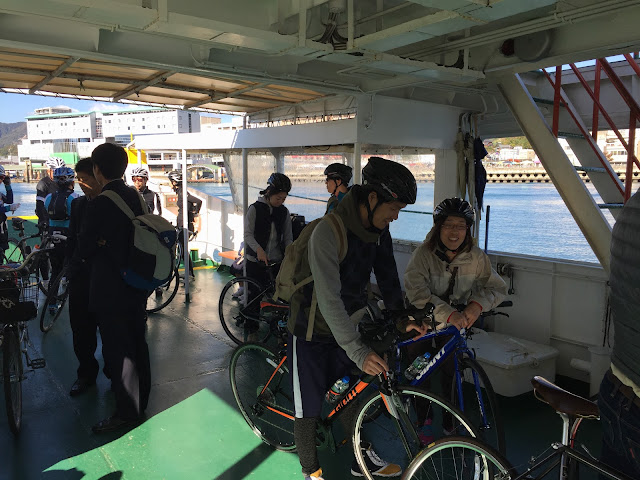 From this first ferry on all other islands are connected by by bicycle lanes over bridges, that were built for the expressway from Onomichi to Imabari. And not only that, even the access to these bicycle lanes are built with cyclists in mind: Cycle lanes that gently slope up to the bridge. 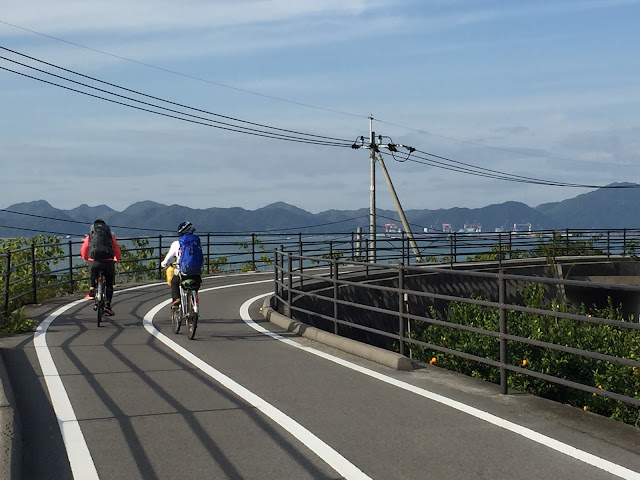 And in between the cycle lane is extraordinarily well indicated. There are sign posts plus the road has a blue line to follow for the shortest island crossing or also for some detours. 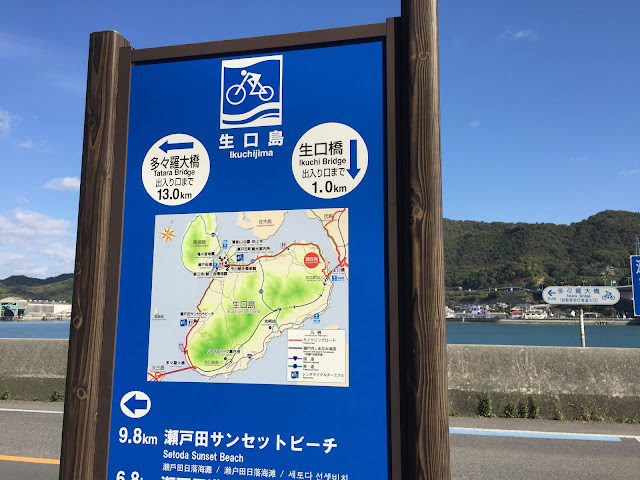 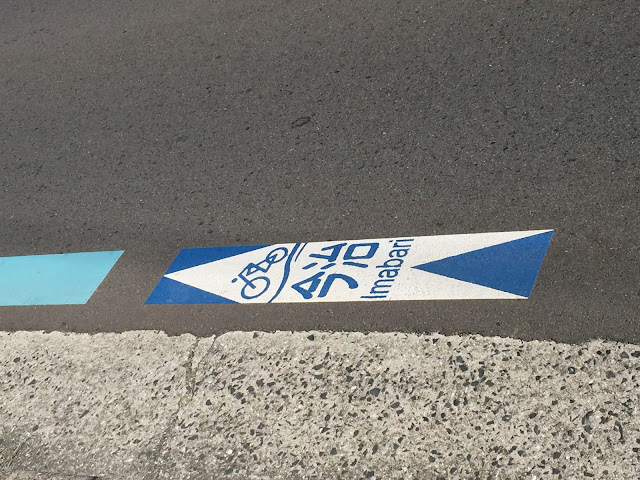 On the first bridge the cycle lane is below the cars: 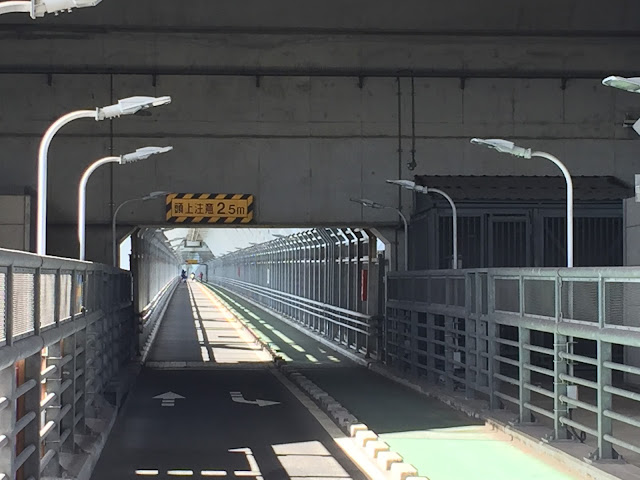 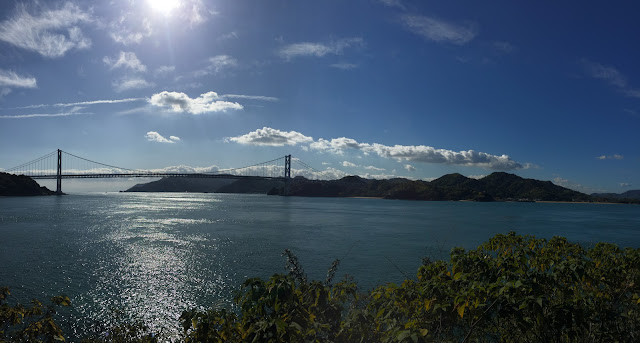 And nice views over the inland sea... 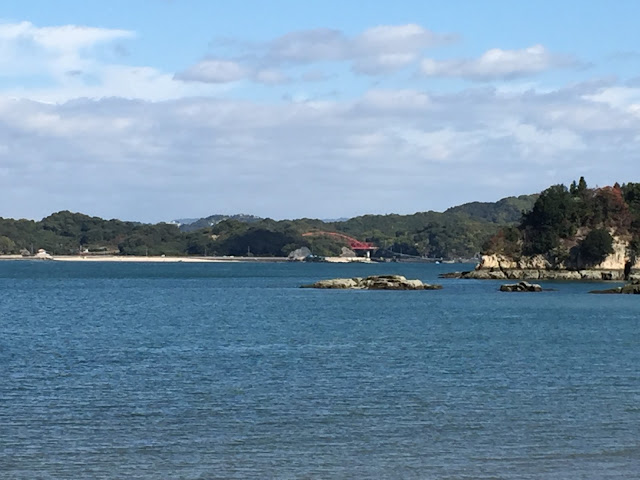 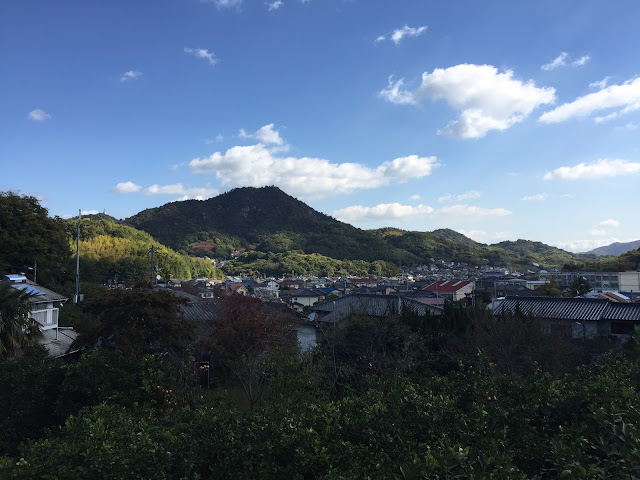 The islands are actually very hilly, but the cycle road is mainly at the coast and thus avoids most of these hills. But for cyclists wanting to add a climb or two, there must be definitely some opportunities. 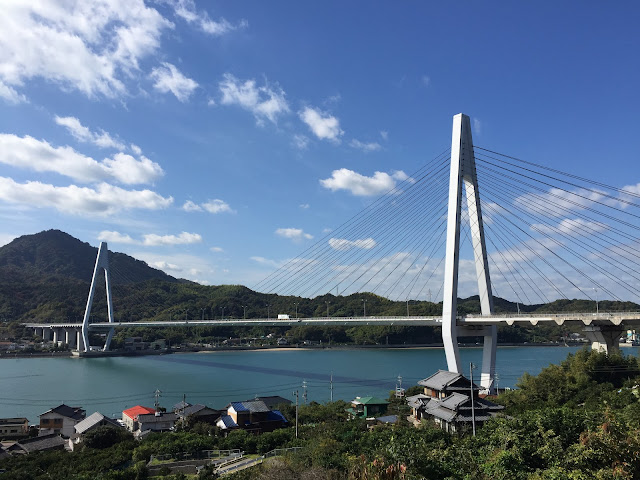 On Ikuchi was also the only "proper" sightseeing spot for today... although the main sightseeing was definitely the Seto Inland sea with all its islands. The "proper" sightseeing spot was Kosan-ji. A strange temple built around 80 years ago by a wealthy - by the looks of it - very wealthy Osaka business men for the spirit of his mother. It has absolutely everything and even more than what a Buddhist temple needs. Pagoda, stupa, temple, Kannon, a tunnel with hundreds of stone figures and depictions of Buddhist hell... Well, everything that money (made mainly in the weapon industry) can buy. 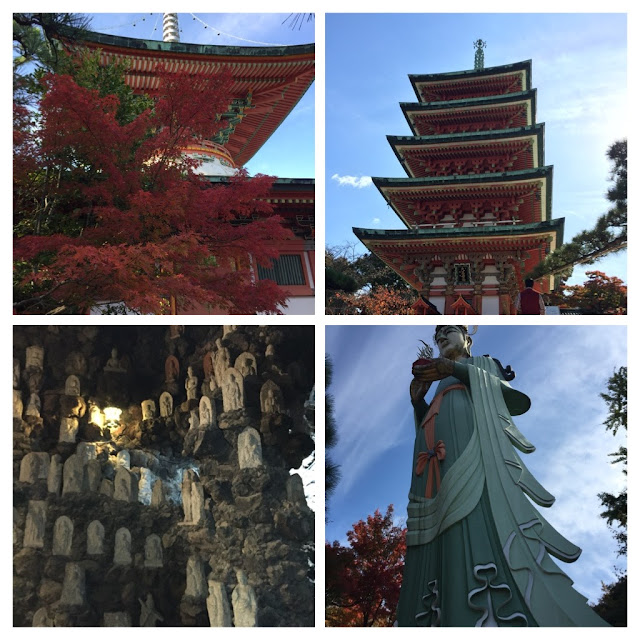 It is very different from many other temples I visited. Here the quiet atmosphere lacks completely. It is more like a the plastic pirate ships on Lake Hakone. Curious and colourful.

On top of the hill behind the temple is a Carrara marmor sculpture garden. 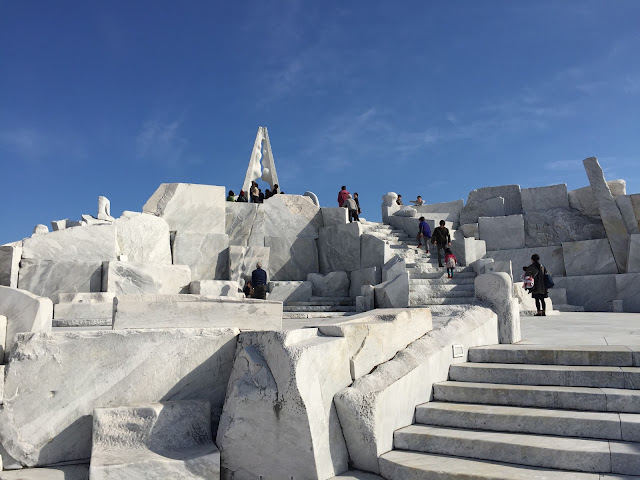 I wouldn't say that it is nice, but it definitely shows of wealth very efficiently.

And last but not least, at the bottom of the hill there is even a fake castle. 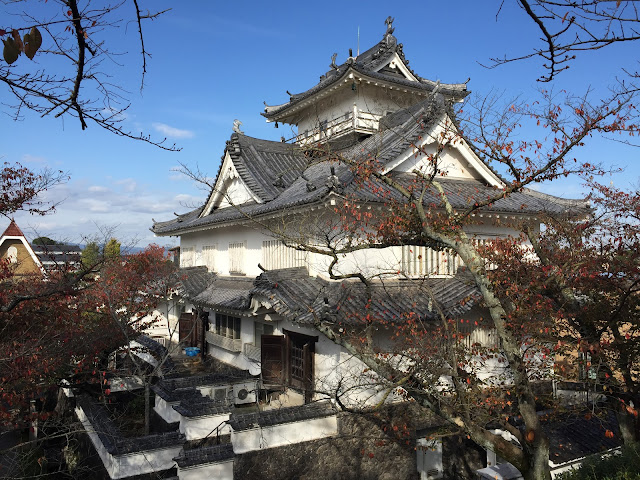 It is obviously a spot well visited by the cyclists, but there are also bus tours and "normal" tourists coming here, to explore a out of the ordinary temple.

From Ikuchi over the third bridge to Omishima, my final destination for today. 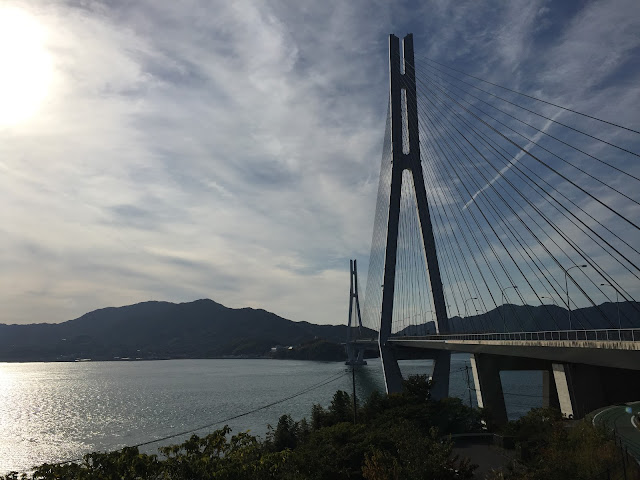 At the end of this bridge was the Cyclist Sanctuary... a photo spot: 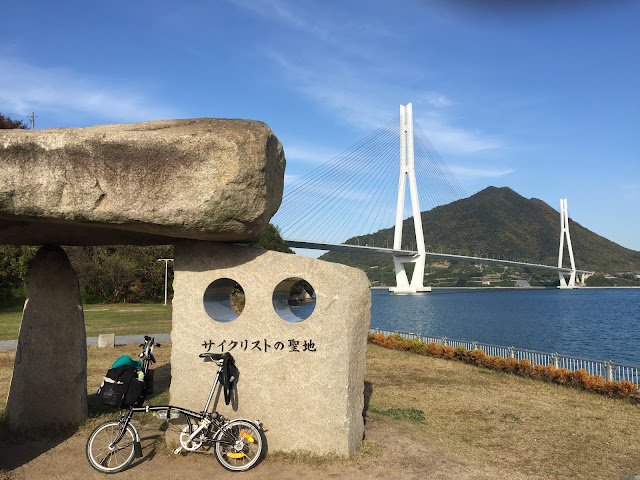 I took an other break there, and then started my half-round of Omishima. While on the other islands, the cycling between the bridges is just on the streets, which however is no problem, as they don't have heavy traffic, on Omishima there is a specially built bicycle lane, even for the island round trip. 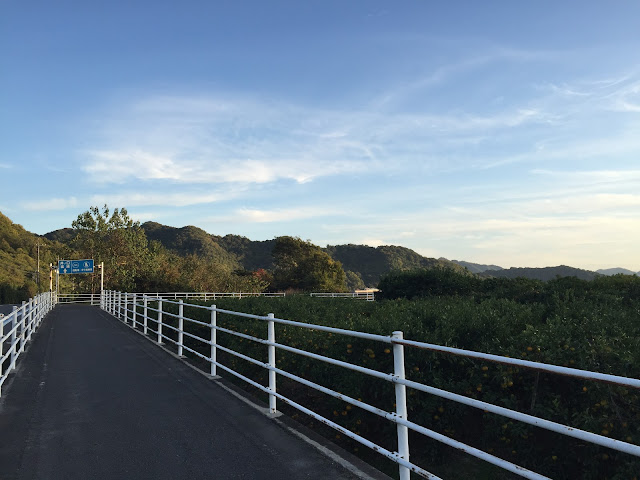 On all the islands there are also a lot of citric plantations. Here some clementines: 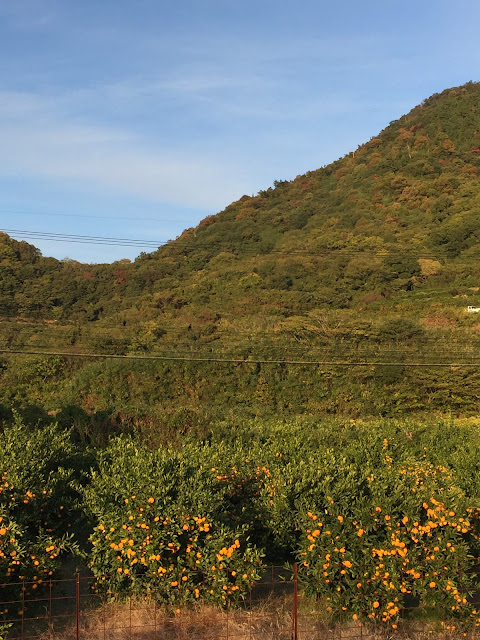 And with that I arrived to my ryokan of the night.

They suggested an onsen closeby, which was quite nice. More like a super-sento, but it had 4 different rotenburos plus 4 pools inside. One of the inside pools was with hot sea water! And one of the rotenburos was for walking in the water. Very relaxing and warming, which is good, as it gets in the evenings very cold now.


For details on the bicycle tour today in Hiroshima and Shikoku, checkout the below maps: