Day 50!!! And today from Kagoshima airport to Kagoshima city, the last week of my bicycle tour has started in the very South of Kyushu.

After less than 24 h in Tokyo I am back on the road on my final week of cycle touring through  Japan. On to the Southern tip of Kyushu, Kagoshima.

When I decided yesterday where and when to restart my cycle tour (after a brief stay in Tokyo to meet a relocation company) I decided to re-start in Kagoshima immediately, as today and tomorrow weather forecast is still good, but forecasting rain for the weekend. When I reserved the flight for Kagoshima I did not realize that the airport isn't really close to the city. But all the better, thus I perfectly knew where to cycle today. And then tomorrow the entire day to explore Sakurajima.

During my 21 h in Tokyo I loaded up on fruits, cereals and very tasty French cheese. So I am ready for more Washoku. While in Tokyo I not only met the relocation company, but even had time to de-register my residence. So ever more ready to move to the Netherlands at the end of this cycle tour. Probably cycle touring is the best introduction possible to the Netherlands...

Here my poor brompton taking its second flight in a few hours. It will need to get used to it, as more flights next week (back from Fukuoka to Tokyo) and the following week (from Tokyo to Amsterdam). So far it is not complaining. 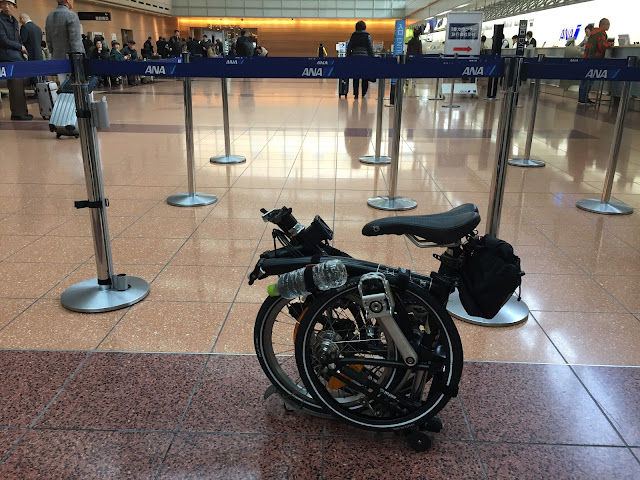 Here a view of the mountains in Southern Kyushu ... 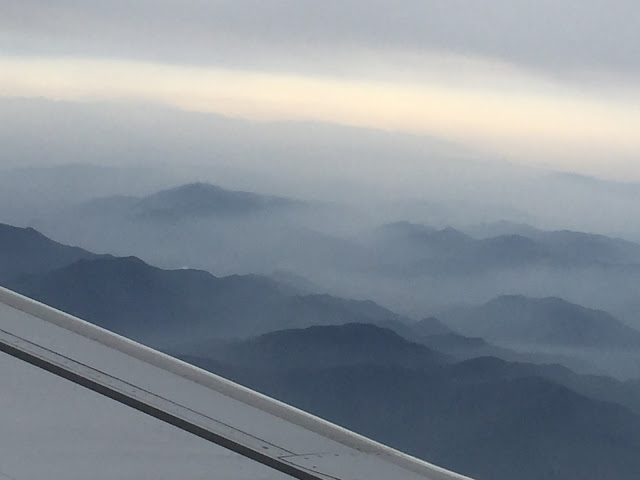 ... and one of many photos I took of Sakurajima: 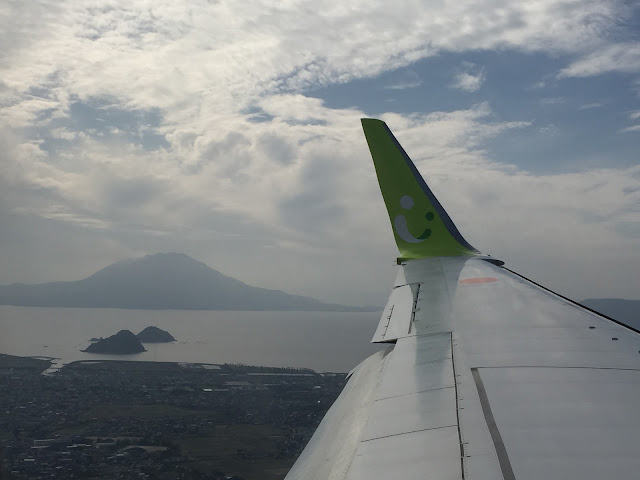 I arrived around 12:00 and about half an hour later set off on my ride into Kagoshima. Close to the airport there were some very accurate cut tea plantations: 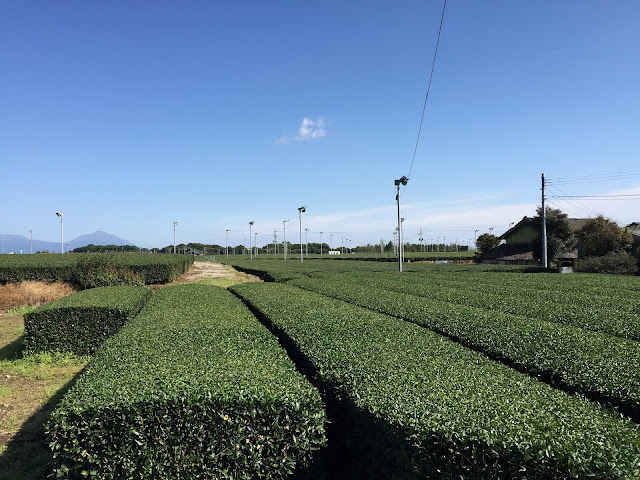 The airport itself is on a high plateau, so the first 9 km were spent rolling down hill and a bit of breaking. But not too bad. At one point a saw a sign for an onsen at a waterfall, and as it was only 1 km, decided to have a look. But it was just a normal onsen building close to a waterfall. A nice waterfall though: 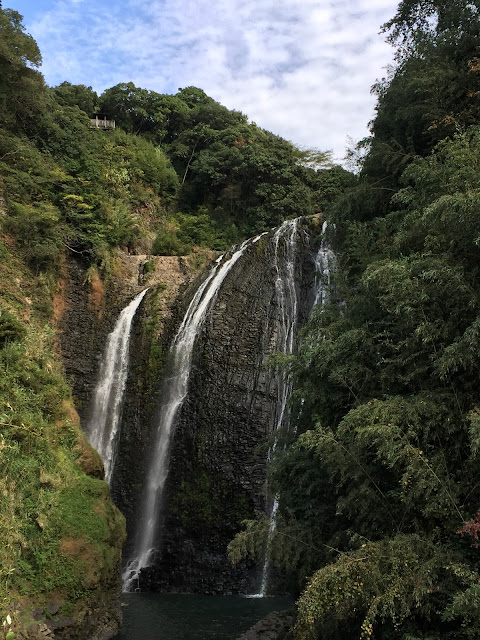 No bathing in the pool of the waterfall.

When I had planned the ride for Garmin today in the morning while waiting for my airplane, there seemed two possibilities how to ride into the city one over some mountains and one down at the coast. I decided for the coast thinking that the view would be nice. It was nice, BUT there was also a lot of traffic on the one and only road. So from about km 19 to 31 the ride was not terribly enjoyable. 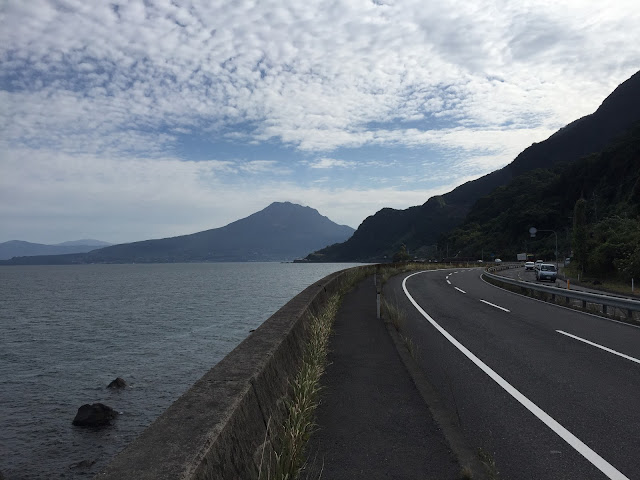 I tried to ride on the pedestrian walkway, but often it had too much vegetation to be safe to ride, so back to the street...

When I planned the ride on Garmin connect, it had a total ascent of nearly 400 m (see here KYU99), but there were again, as in some previous rides some mysterious very steep hills, that on the ground did not exist at all. In the ride tomorrow on Sakurajima there is the same problem. Looking at the map with elevation profile, there are no such steep mountains, but in the Garmin elevation profile there are... Very inconvenient.

When that stretch ended, there was a big parking lot and a lot of people walking around. I wanted a stop anyway (actually for lunch), so I decided to stop there. It was a place with surprisingly many people and even tourist buses aplenty. So I had a better look, and discovered that I had just "run" into an UNESCO world heritage site and a famous Japanese garden: Senganen Garden.

So I decided to skip lunch and be a tourist. The garden itself is not among the best in Japan, but one has to admit that the local daimyo found a good way how to incorporate the obligatory "small pond" and "hill" into his garden: 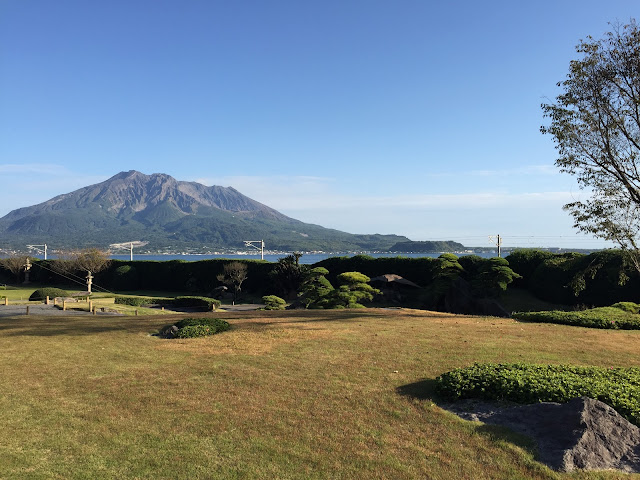 I had taken a full access ticket, that also included a guided tour of the main building and a matcha, which came with a special sweet, that if I understood correctly among others contained shitake (a mushroom) and yuzu (a citric).

In the garden, as in so many others there was an exhibition of flowers. I normally always walk by these flowers just looking at them from far, but here there were detailed descriptions of what was the specific beauty of these flowers: 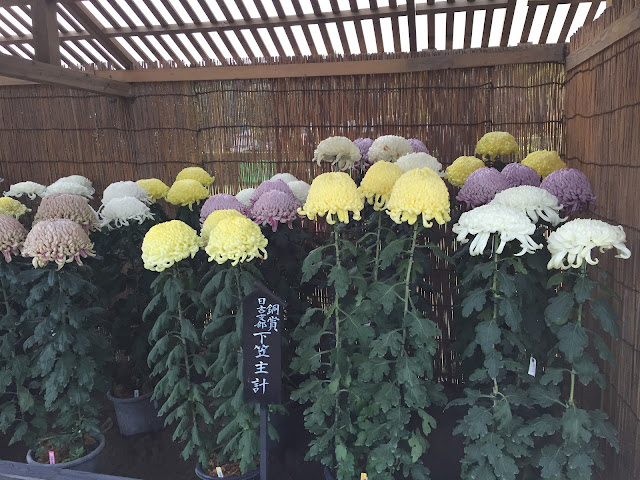 I think it is hard to guess, but these flowers here are admired for being a set of 6 pots (each pot has 3 flowers), with 6 varieties of chrysanthemum with at least 3 colours, where the front flowers must be shorter and taller flowers to the rear. Also the colour arrangement is decided BEFORE growing the flowers, so while they are growing height control is important (which apparently is achieved by some grow controller). And I always thought that these were simply flowers.

There were different displays. From 1 pot (always with 3 flowers) at maximum 40 cm height to arrangement of 12 different pots, all arranged per height both within the same pot and across the row of pots. And then there was this unruly flower explosion in the form of two daimyos: 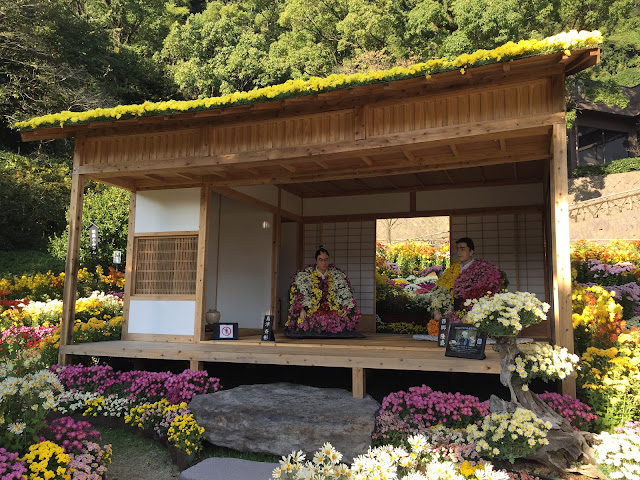 The garden is part of UNESCO world heritage as part of the Meiji Industrialization heritage sites, because it belonged to the Shimadzu clan, a very powerful and apparently forward looking Daimyo who controlled the South of Kyushu and Okinawa. Through Okinawa even during the Japanese isolation centuries they were trading with foreign countries and acquired Western weapons and technology. Once Western countries were lurking ever closer to Japan, the daimyo decided that it was time to produce similar weapons and that he needed large industrial plants for that. So a number of plants were built, this building here being the oldest survivor or a industry plant in Japan: 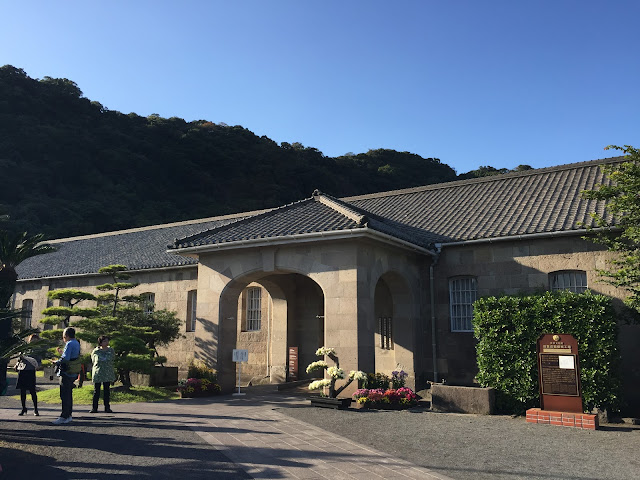 In this building is a nice and partially English explained exhibition about the Shimadzu clan and the Shuseikan project, an industrialization project at the end of Edo and beginning of Meiji period, initially started in order to produce weapons to potentially withstand Western powers. But then also developped glass and porcelain manufacturing among many other technologies, including learning how to built steam machines.

There was also an interesting description of trade in the period of Japan's closure to all external contacts. Per the museum some trade still continued, by pirates, who as you could not BUY something in foreign countries, raided the coasts for goods to sell. Not sure if one could order a specific item from them...

It was getting colder, so I put on my cardigan and the fleece jacket for the final ride into town. During the ride I also passed close to this monument for the arrival of Francisco Javier in Japan: 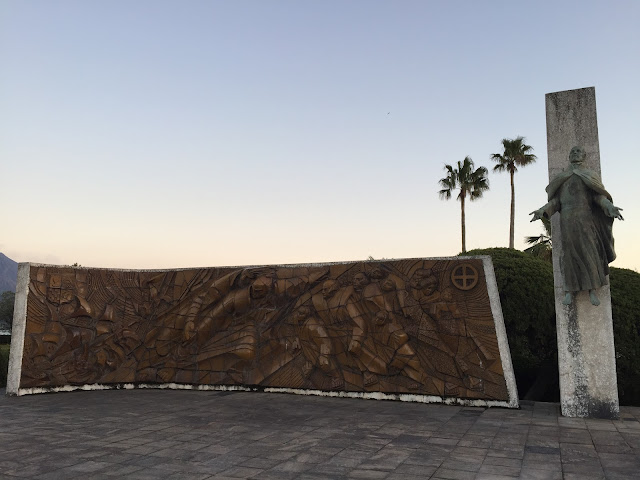 And thus I arrived to my hotel, which is in a very lively place of downtown Kagoshima, but my room is probably quiet and I had a good dinner of Satsuma cuisine in a restaurant suggested by the hotel. 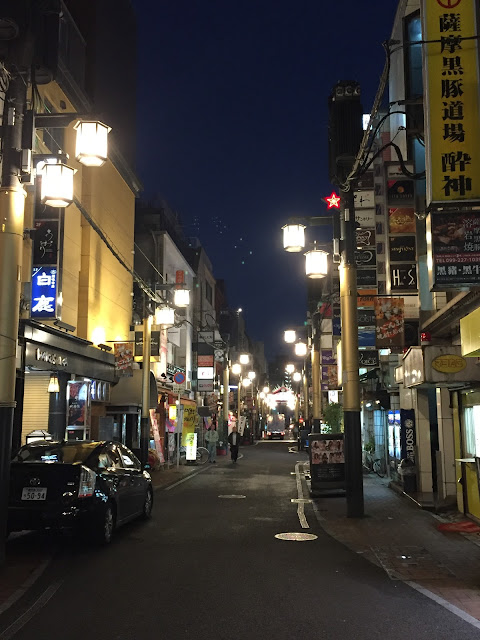 
For details on the bicycle tour today in Kagoshima, checkout the below maps: