An other perfect day on the bike, touring Japan. The highlight of today was probably the bicycle road along Lake Biwa.

Today started where yesterday ended, at Chomeiji. Only that yesterday it was the place to soak, today it was a place for a temple visit. And well, in a certain sense, soak first, because in order to even get to the temple I needed to ascent 808 steps!

The temple on top however was rewarding, even with a three stories pagoda. It did not remain to be the only pagoda of the day though... 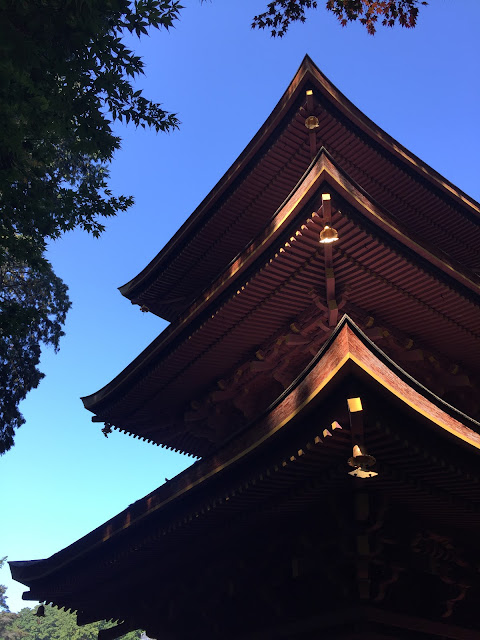 Also the temple grounds where really nice and one had a view over Lake Biwa. This temple is one of 31 (?) temples of some Kannon pilgrimage. The traditional ascent is obviously through the stairs which I did coming up. But close to the top there is now also a parking lot, so many, but not all, people come driving up. I did take advantage of this road on my way back and instead of making it down the irregular stairs, I walked down the road. Much better, specially because I really don't like stairs, specially descending stairs. 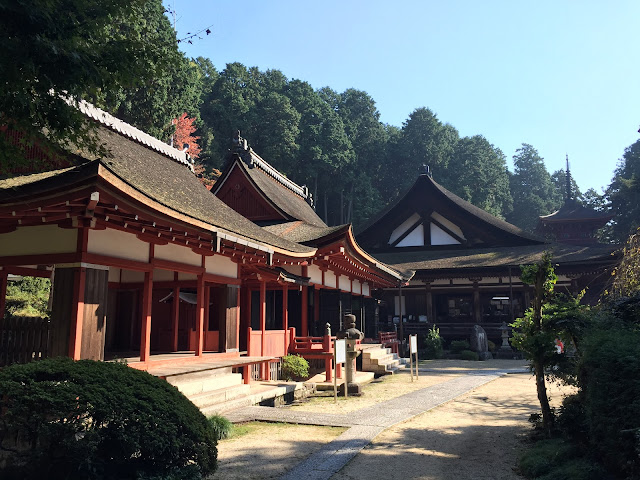 After this exercise in the morning it was already around 11:00 when I came down and really started the ride of the day.

Today was marked by a good bicycle lane on the shores of Lake Biwa and a lot of cyclists actually using it. Today was without any doubt the day I have met most cyclists ever. With one I did even ride together a few kilometers into Kyoto, but more on that later.

Lake Biwa seems to be well known by the local cyclist community for a day trip, and not few cyclists do the entire lake in a day. But then obviously without any sightseeing, which would be a pity, missing out on Hikone and the two temples I visited today.

For the entire day today, there was a bicycle lane following the lake, which was used both by recreational cyclists as well as by more ambitious ones. Only a few preferred to use the street. The bicycle lane was generally not overgrown nor invaded by vegetation, pedestrians or other obstacles. Only occasionally there was some debris left. I still kind of suspect that the typhoons recently had something to do with that.

The only minus point of this bicycle lane is that it is running not only along the lake, but also alone the street, which is rather busy with traffic. So it is not really a very romantic ride.

The ride along the shore was, with the exception of the amount of cyclists, again mainly in the contrary direction, eventless. When preparing - many months ago - for this ride, I had read somewhere that the "rainbow bridge" would make a nice view. Well, judge for yourselves: 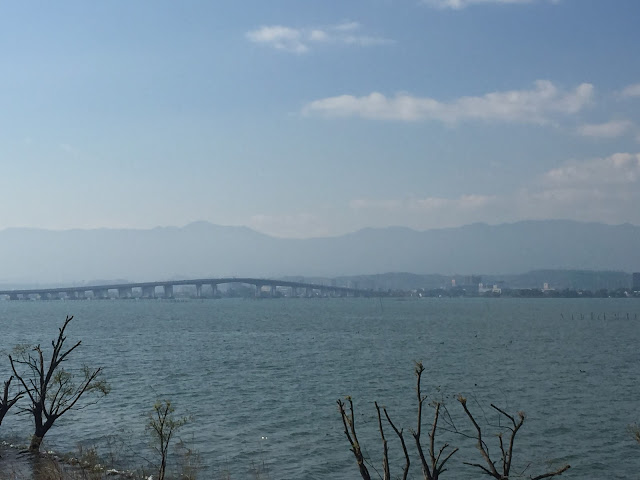 I was not too impressed and continued on along the shore. Today, being a local holiday, the lake shores where full of cyclists (on the bicycle lane), families picnicking in small parks and men fishing. I say "men fishing", because so far in Japan, I think I have never seen a single women fishing. And definitely none today. Fishing is incredibly popular in Japan, at least among men, and not only elderly men, but young men, boys, fathers with their sons... Also among the cyclists it was mainly men, probably around 80 %. I started to wonder where all the Japanese women are on a nice day. Shopping? Cooking? Hiking? Definitely not fishing. The only women I saw involved in a fishing-related activity was a mother taking pictures of her small son who had just caught a small fish.

In the lake there are fish, but on the lake at a certain point there were really a lot of ducks (?):

All these black-white spots on the lake in the pictures above are birds: 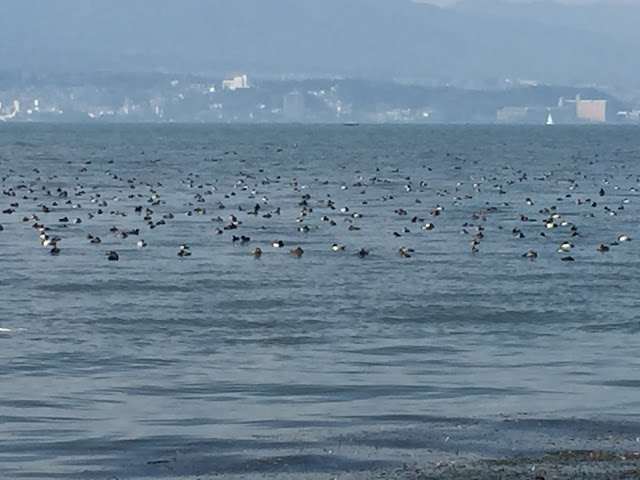 Closer to Otsu, I came by the "Mu Utopia Project". A very nice building (of which I didn't take a good picture), for one of those strange new Japanese religions. It seemed that its followers did believe in donating money, at least that's the only explanation I have why they could afford such an enormous, good looking building. On the parking lot there were buses and buses.

I somehow had decided that I wanted to have lunch only at Otsu. But Otsu is actually quite far away from Omi Hachiman (  km)... so when I finally came into Otsu I was quite hungry and also quite tired, so I took the first chance for something to eat, which was a 7/11 and a park on the lake shore. Only after I had already bought my lunch, I spotted this "Würzburg Haus": 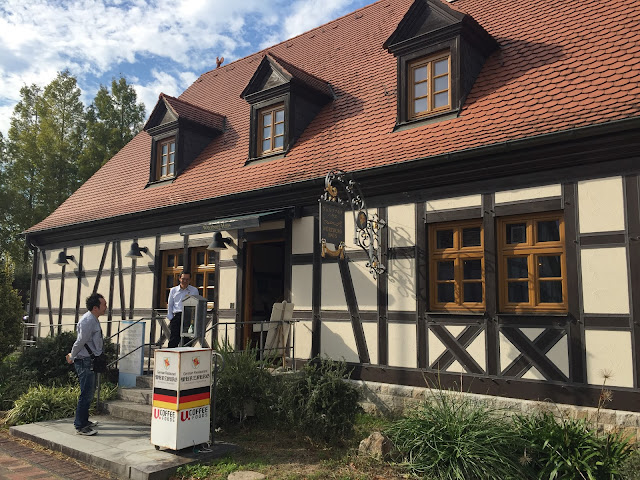 Note the claim on the dedicatory note of "Würzburg im Freistaat Bayern der Bundesrepublik Deutschland"! (Würzburg in the freestate of Bavaria of the Federal Republic of Germany): 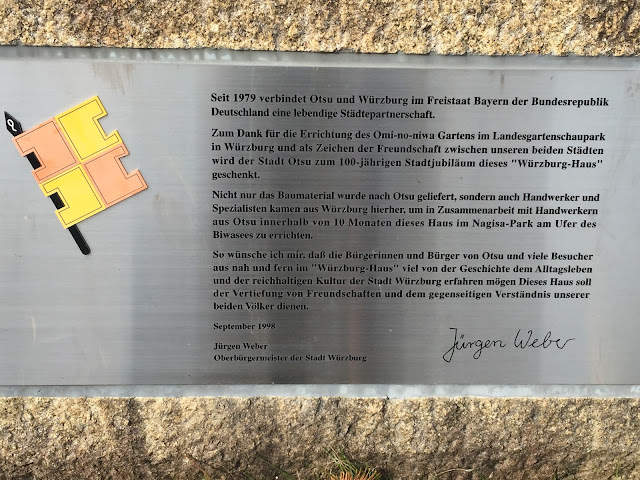 After a rest on the lake, I continued to my touristic goal #2 of the day, Miidera. When I arrived there it was shortly before 15:00, I was tired - not withstanding the rest - and still had to go 17 km to Uji. But I still decided to have a quick visit of the temple. And here it was, pagoda #2 of the day: 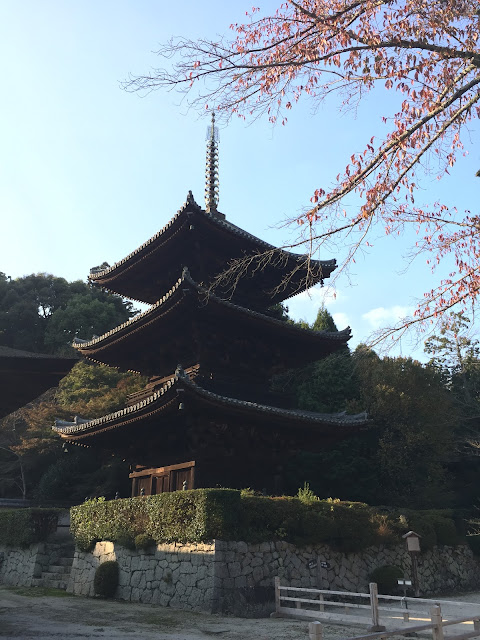 I made it a short visit (30 min only) and then headed off in direction Kyoto over the mountains. I had somehow feared that the road from Shiga to Kyoto would be quite busy with traffic, but as a matter of fact it was a very, very quiet mountain road. There is obviously an other road running not too far from this one, which instead must be very busy. 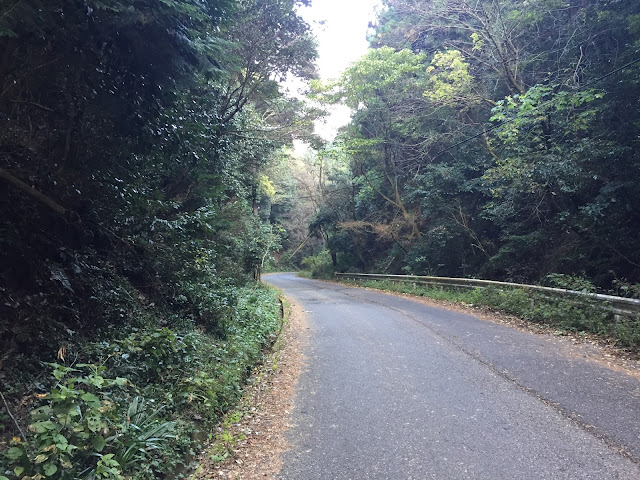 I mainly pushed my bicycle up hill. But the ascent isn't too long, so it was not too long of a push. And if you look at Strava, I was still within the first 628 people to finish this ascent ;-) 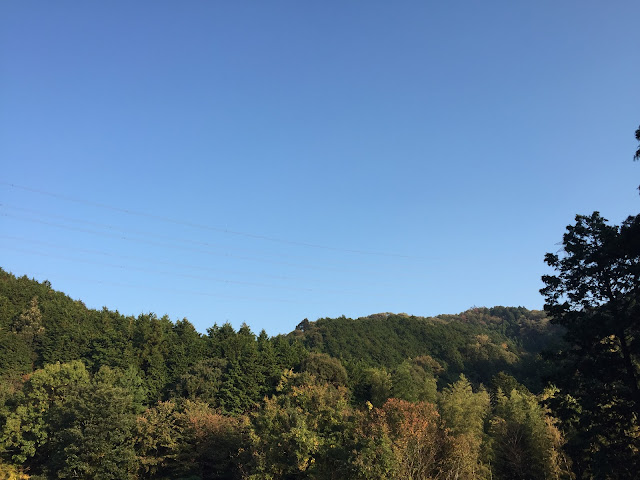 At the end of this hill I met a much more professional cyclist, from Romania, he waited for me and we then did ride together into Kyoto. He lives in Kyoto and did a total of 2000 m (!!!) ascent today riding into some mountains around Lake Biwa. While I did just complete Day 39 ;-) of my bicycle tour through Japan. We road together a good part into Kyoto and must have made a very strange couple: the semi-professional looking cyclist on his racing bike, with the slightly overweight bicycle tourist on a brompton and with a big luggage bag behind. At some point he needed to turn to get home in the direction of Kyoto station and I continued my path into Uji. This involved a ride along one of the typical Japanese river bicycle lanes. 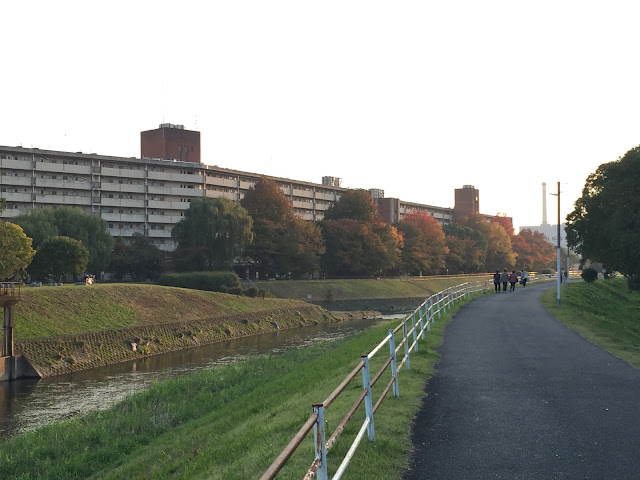 I arrived to Uji right for the sunset over a bridge in Uji: 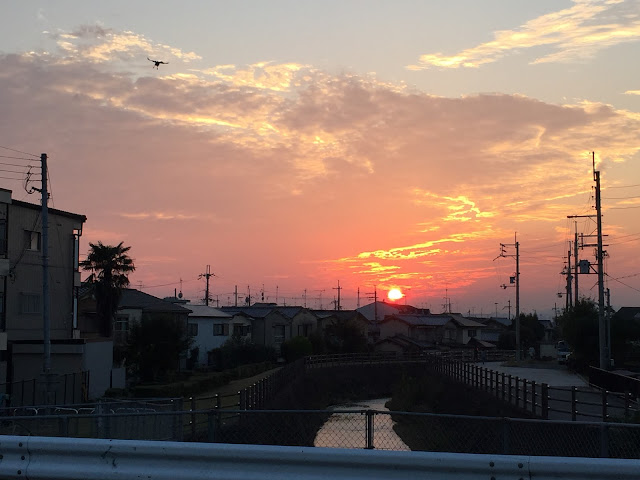 Well, okay not "THE" bridge of Uji, but still a bridge in Uji.

My ryokan of tonight is located in the centre-most part of the centre of Uji, right at the entry to one of the traditional bridges over the river and at a few meters from Byodoin temple. 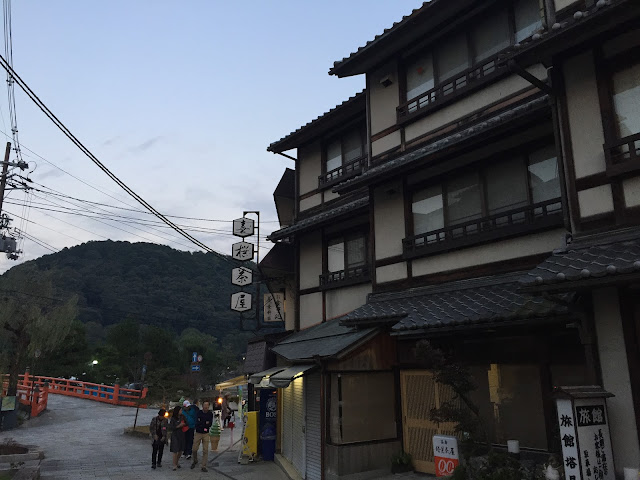 But more exploration in Uji tomorrow.


For details on the bicycle tour today in Shiga and Kyoto, checkout the below maps: