Today was the first cold day on my cycling trip through Japan, and that in Kyushu! But not too cold to visit the village of Asterix, ups sorry, of the Yayoi culture.


I started the day in the onsen of my hotel and I ended it in an other onsen close to my new hotel in Saga. I had a hard time yesterday to find an accommodation, but finally the one I did fine, in Saga, close to the station, is very good. A big hotel, quite elegant and not very far from an onsen (well, more like a super-sento). So all is fine.

Between these two soaks, I had a small roundtrip - by bicycle only - through Yanagawa and then a ride up by bicycle to Yoshinogari, where there are remains of the Yayoi culture and a recreated village has been constructed.

Yanagawa is famous for its nice channels and the boat rides on them. Well, I did not do the boat ride, essentially because doing it alone seemed a bit strange. So I just took some pictures of other people doing it: 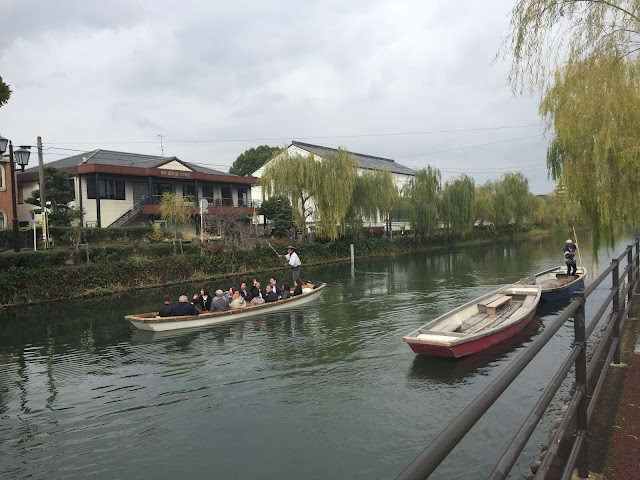 As today was the first quite cold day on my trip through Japan, I did use my long trousers and did start my ride with a cardigan on. If you wonder, where the long trousers have come from, I added them to my luggage during my brief stop in Tokyo earlier this week. After a while of riding North against a fierce head wind, I did take of the cardigan though and continued in short sleeves. Still wondering if the jeans were the right garment for riding. They were perfect though for the touristic part of today.

The ride up North was through a typical and not very nice Japanese landscape. Well, not really LANDscape, but more like a VILLAGEscape. There was everything mixed, fields, plants, houses, abandoned houses, old houses, new ones, derelict ones, shopping centers, convenience stores... Everything mixed and in between rice fields. It didn't help that the wind was blowing strongly and not in my direction... 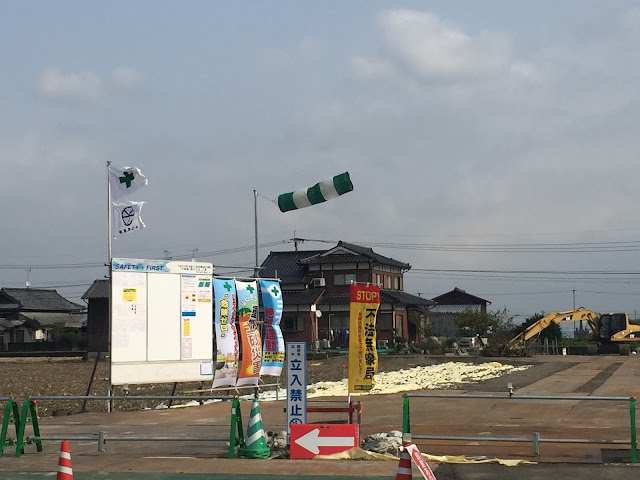 But finally I did arrive to the Yoshinogari Historical park, where important Yayoi excavations have been done, but more importantly from a touristic perspective, an entire village including residences for the ruling class and temples have been reconstructed.

It reminded me a lot of the village of Asterix. Probably these wild boar at the entrance to the village did help create this impression: 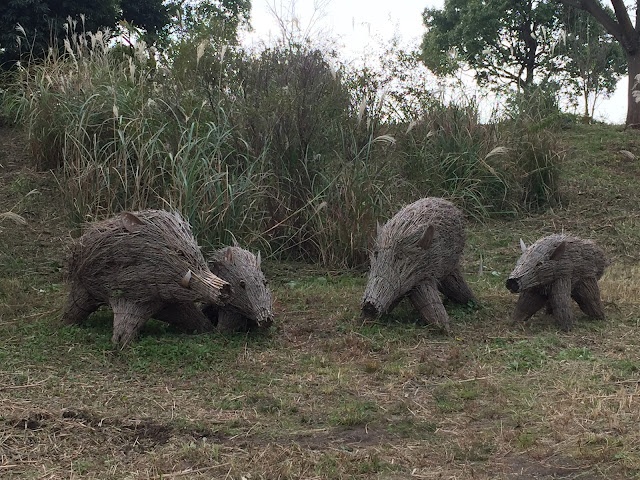 And well, the wooden wall around the village: 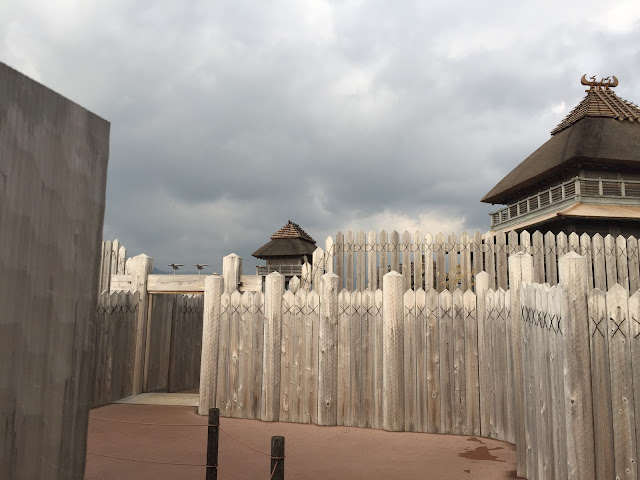 Also the houses really looked very Asterix-like. One could enter into most of them, where small every day scenes of the rich and powerful of the Yayoi culture were depicted. 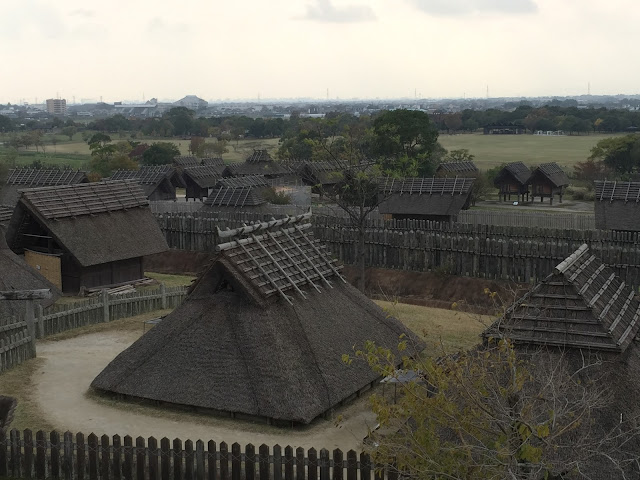 This was the most important temple/shrine of the village. About 16 m high with two big rooms for ceremonies. 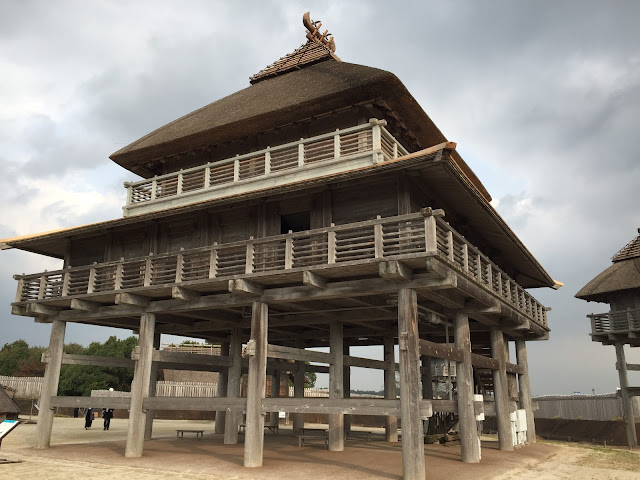 There is also a small museum with the typical clay rests and spear points that one can see in all these kind of museums (obviously a Yayoi culture fan - or any other pre-historic culture fan will say that the tools used by the Yayoi compared to everyone else are very different... but to me they looked like the typical stone tools to cut meat, spears to hunt etc.

Further inside the park there is also a museum with the excavated remains of a burial ground. At least the rich got buried in large vases, closed by an other vase. These burials were quite large, a sitting corpse really only occupied half of it. 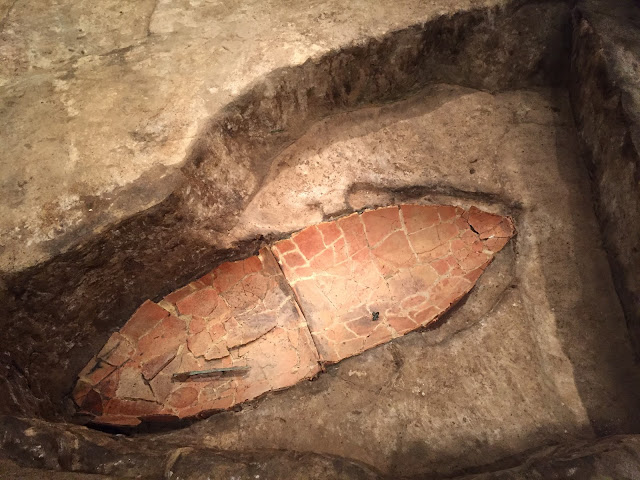 These two here are Majestix (= Vitalstatistix) and Gutemine (= Impedimenta): 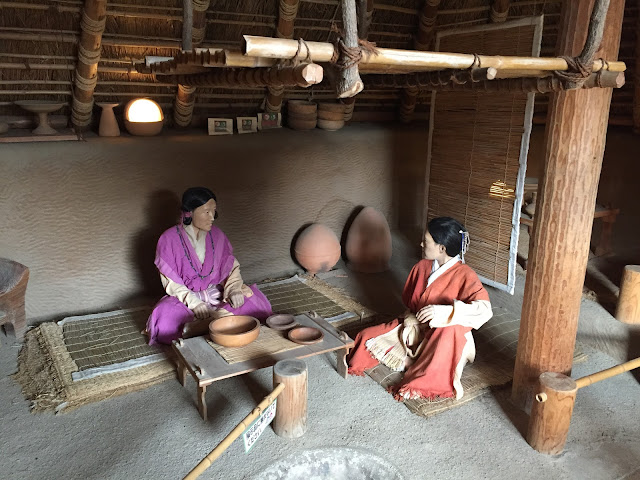