After breaking my saddle yesterday (after more than 5000 km) the first thing I did today, was getting to a bicycle repair shop. I was lucky enough that it broke here, not too far from Osaka, where there are several brompton sellers. I called ahead of time, and when I arrived a few minutes after he opened his shop at 11:00 he had the saddle already ready there, waiting to be installed. 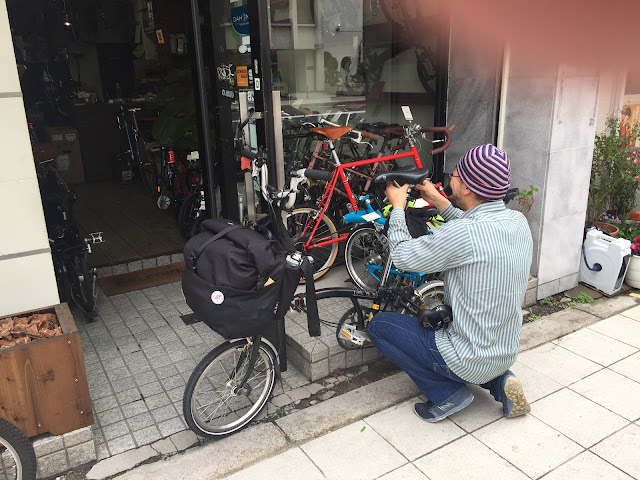 It was even a very convenient place to get to from Yamatoyagi, with the express train only 2 stations away and then 1 km by bike. So already at 12:00 I was back in Yamatoyagi and ready for the ride of the day, a continuation of Day 3.

I started with Hibara shrine. On the way there, as so often here in Nara prefecture, I came through the tranquil country side, where new rice plants were being grown for being planted later. 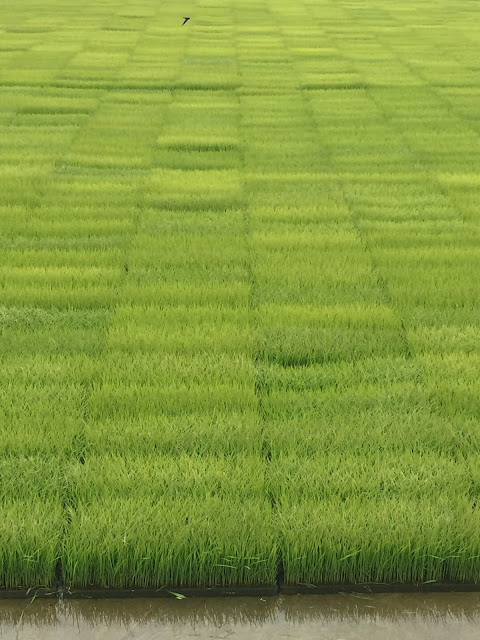 Hibara shrine is mainly famous for its 3-arched Torii, a very unique shape. Apart from that there isn't a lot around, but the place is wonderful, so relaxed, on the foot of one of the holiest mountains in Japan, with the Yamanobe-no-michi coming through, and even more importantly a small restaurant where to enjoy a bowl of noodles in the shadow of a large roof. Perfect place for a lunch! 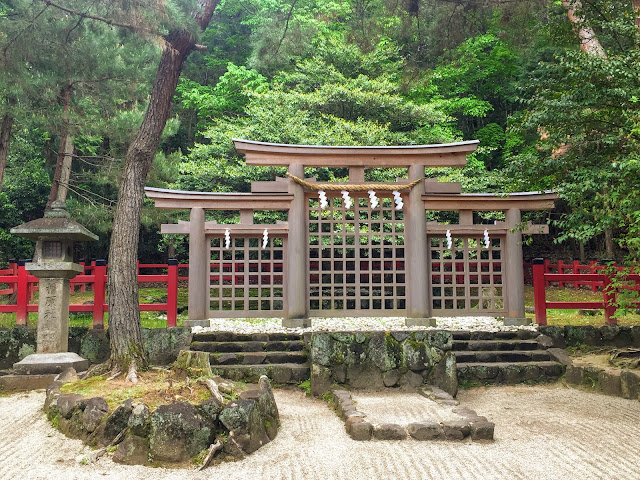 Omiwa Jinja then wasn't very far. It is announced over the plain by this gigantic, but modern torii. 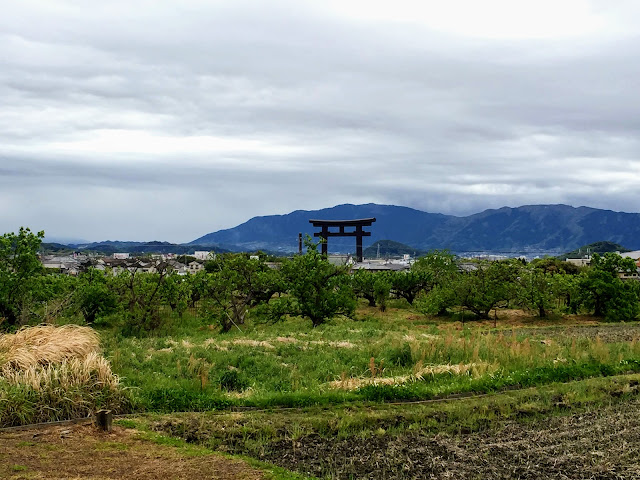 The actual shrine then is at the foot of Miwa Mountain, which in itself is the main "building" of the shrine, as it is believed that the entire mountain is a god. However to climb it, one needs to get a permit (I think it is more like an entrance fee) and one needs to be back at 16:00. So that can still be on a future "to-do list" for tourism in Nara.

The normal torii's at this shrine are also somewhat special, with no horizontal bar: 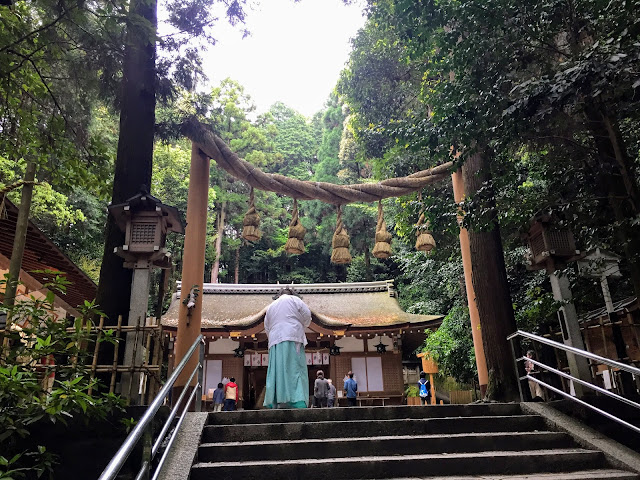 Some of the gods here seem to like Sake and raw eggs a lot, but need the sake to be opened for them... At the round well instead, there is holy water that the mountain (= god) gives. 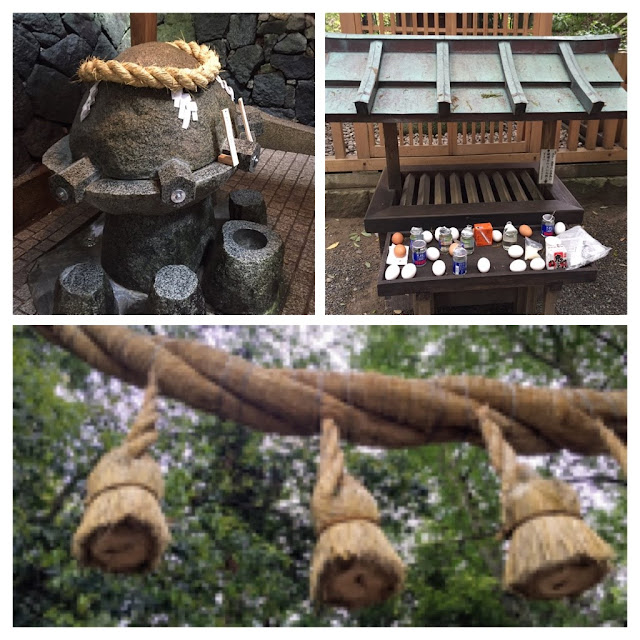 When planning the route, I saw an other apparently interesting shrine, Tanzan Shrine. Only problem, it is in the mountains... This didn't stop me though, as I was thinking, well, if it gets totally impossible, I can always just turn back.

On the way to the shrine, I also stopped at this extremely idilic lake, with some azaleas flowering: 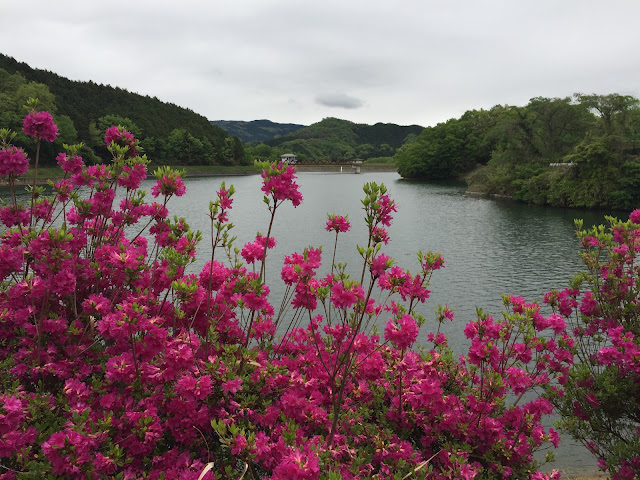 But then I continued on, higher and higher, stopped only briefly for a waterfall (would have been nice to get into it): 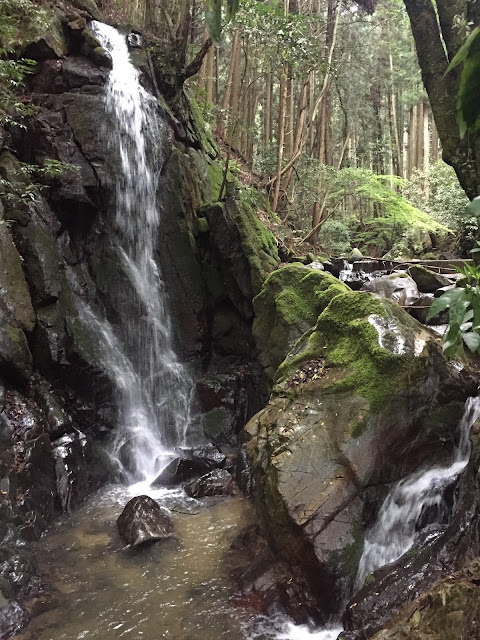 And finally made it to the peak where the shrine is located. I went also partially because shrines normally don't have any closing hours, and it would have been still enough light to see it... however - maybe because it was a temple in the past - this shrine actually has closing hours... and was already closed. So I guess this one remains on the "to-do" list. It looks very interesting... only problem is that mountain it is on. It wasn't really nice to ride up to it (I rode only until the intersection where the street goes towards the shrine, afterwards I pushed my poor bicycle). Nevertheless Strava awarded me a QOM (Queen of the Mountain)... solely thanks to the fact only 2 women ever tried with Strava on to climb that specific part of the hill... and the other one must have been much slower still when pushing her bicycle up. 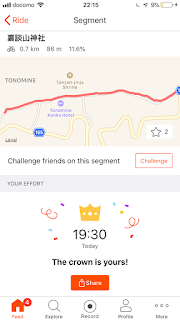 What I did achieve however was the highest ascent so far in my Garmin/Strava career. 588 m in total and 516 m at the top of the mountain! Starting from only 20 m elevation down at Yamatoyagi.

So well, there was nothing else but to ride down again, on the other side of the hill. And actually riding down a hill so steep isn't that much fun either. However the landscape was really nice, albeit a bit foggy:

After this record ride, I was entitled to a visit in an onsen. Actually in that same onsen I was already 1.5 years ago, a big super-sento with different pools outside including one to lie in the water (one of my favorite ways how to enjoy onsen) and a lukewarm one, with a TV set, everyone was attentively watching. On were TV comedy shows and the countdown to the new Reiwa 令和 area, which will start at midnight.

My last picture of Heisei 平成: April 30th of Heisei 31. 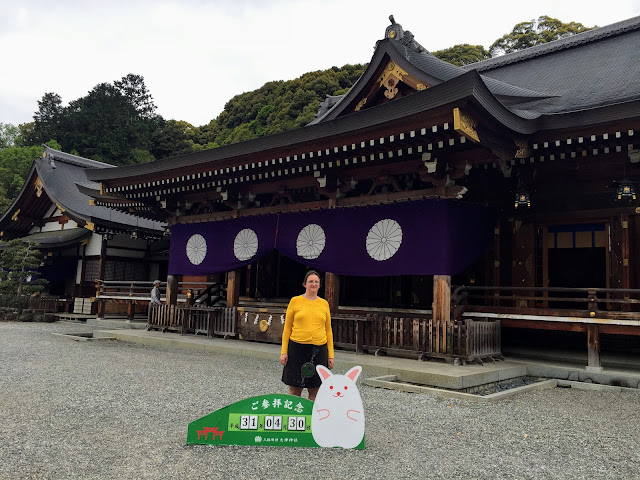