From Osaka to Daigoji in Kyoto, but... 大阪から京都の醍醐寺へ、が...

Back in Japan, for business as always.

In February I had stored my faithful brompton under my office desk in Tokyo and yesterday I recovered it from there, rode to Shinagawa station and then with the Shinkansen to Shin-Osaka, where I will be staying until end April. Today Saturday, thus the first possibility for a ride.

Originally I had planned to go this weekend to Yoshino to see the cherry blossoms there, but current blossom report has it that the blossoms are just about to open, so clearly to early. While in Kyoto blossoms are at its best (or slightly after best already) ... but last weekend they were still just about opening. So I looked up nice cherry blossom places in Kyoto and Japan Guide suggested, among others, Daigoji. A temple which isn't in the main spots for temples and actually a bit hard to reach (well, for the average tourist), but quite nicely reachable by bicycle.

However, surprise, surprise, I didn't have an early start. Today's excuse was that I wanted to buy Sumo tickets for Tokyo in May, but although I was ready at precisely 10:00 the web page selling the tickets broke down immediately. When it worked again (a few minutes later) all tickets for the 2 days we have availability were sold out. I even tried in the conbini around the corner... but with the same result. Then shower, breakfast... so finally I didn't start until 11:30.

The weather was really fine today and I had a great ride along the river connecting Kyoto and Osaka. Specially the part after crossing the bridge became quite nice after a while. It is your typical cycling lane along a heavily regulated river... so don't expect nature in all its splendor, but a good ride. When I came to the bridge towards Arashiyama (where I rode back in January this year), there was a huge Hanami party ongoing between two joining rivers: 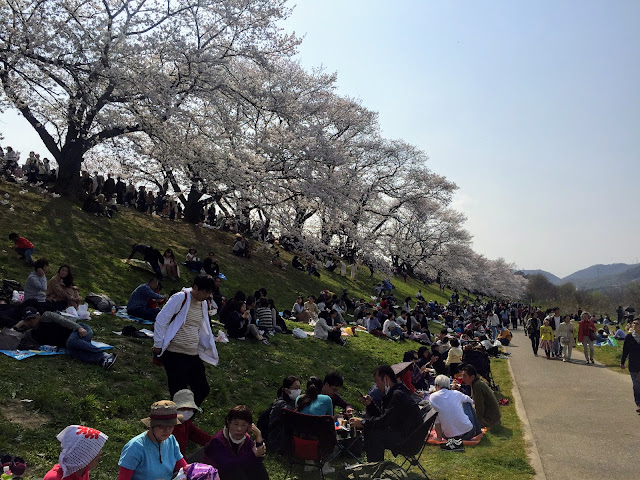 I got some Maki-Sushi at a stand, ate it in the shadows of one of the cherry trees looking over the river and onto the mountains around Kyoto. 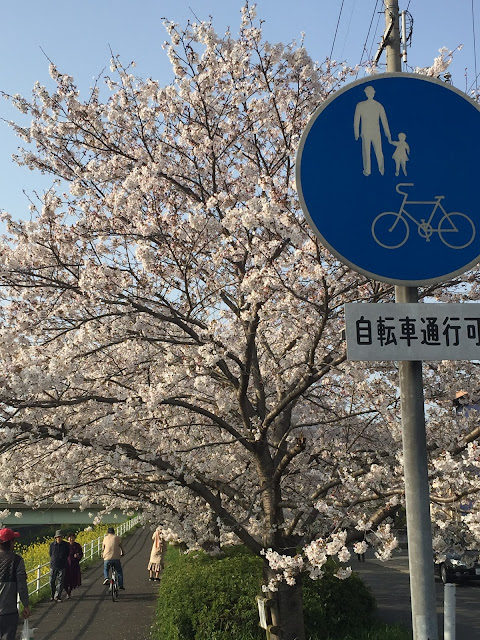 By error I drove a bit too far (not too much), so needed to return to the Daigoji temple. Unfortunately by the time I arrived there it was probably around 16:20. I took my time to park the bicycle (close to another brompton!) and by the time I arrived at the first temple building, I realized that I needed a ticket... by the time I arrived at the ticket booth (50 m away), it was 16:32 and ticket sales had stopped at 16:30 sharp... So no way to get into the temple. But also true that 30 minutes would never have been enough. So - at least today - I could only take a few pictures of cherries and temples: 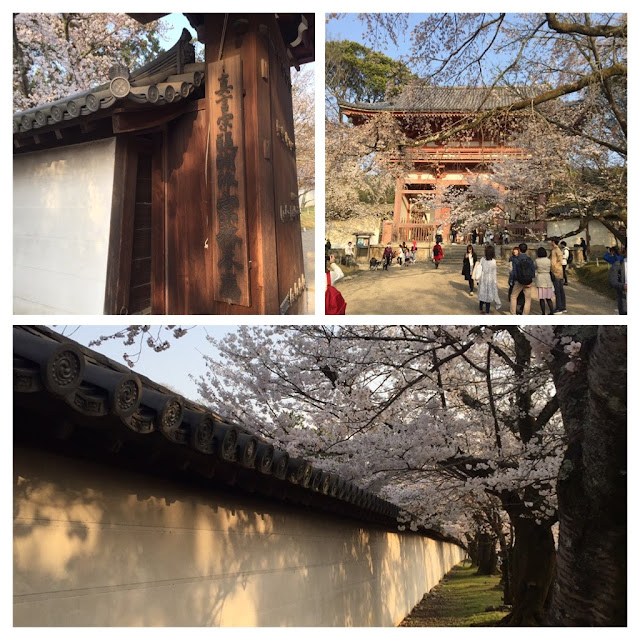 Still I took my time to walk through the parts of the temple that are generally open and took the pictures I could. I decided however also to return there tomorrow.

At around 17:00 everything was closing and I recovered my bicycle and rode back down to the Uji river and onwards to Yamashina station, where I had come already last Sunday with some colleagues from Spain and Germany in the pursuit of Kyoto tourism. I considered there for quite some time, if I should park the bicycle there at the station... but finally decided against it, just in case that I do NOT got to Yamashina tomorrow. Probably a stupid, but also the safer decision.