I followed through on the decision taken yesterday, to go back to Yamashina and complete the sightseeing of Hanami there and then ride back to Osaka. 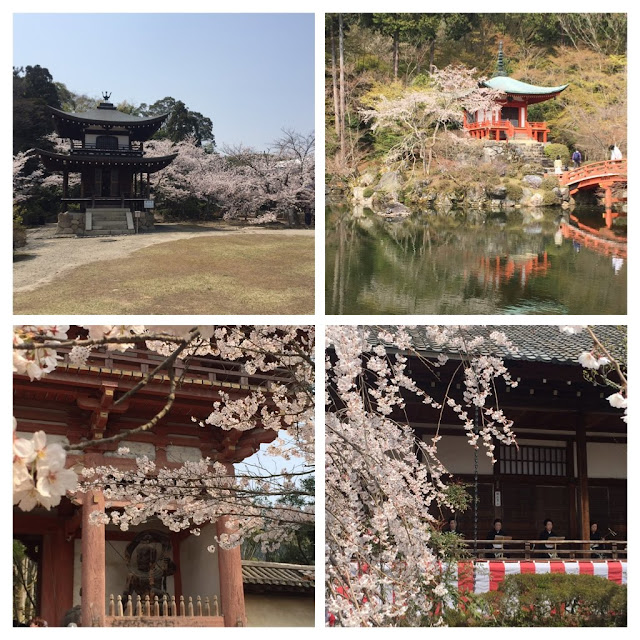 This was definitely the better way to address this route. First sightseeing and then riding back. And in retrospect, it was great that I had not arrived yesterday in time at Daigoji temple. The complex is huge and with all the cherry blossoms invites for a lot of pictures. I think I spent probably about 2 h (including lunch) there today.

My day started at Bishamon-do temple, close to Yamashina station. Today it was the turn of their Hanami festival. They didn't only have the obligatory flowers but also various spectacles. When I arrived it was the turn of a group of elderly, very formal ladies playing the shamisen. 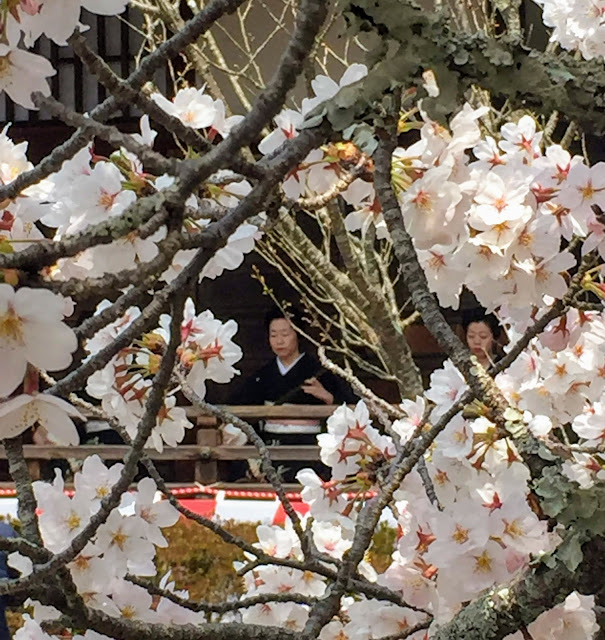 And more flowers creating a very nice atmosphere at that temple. 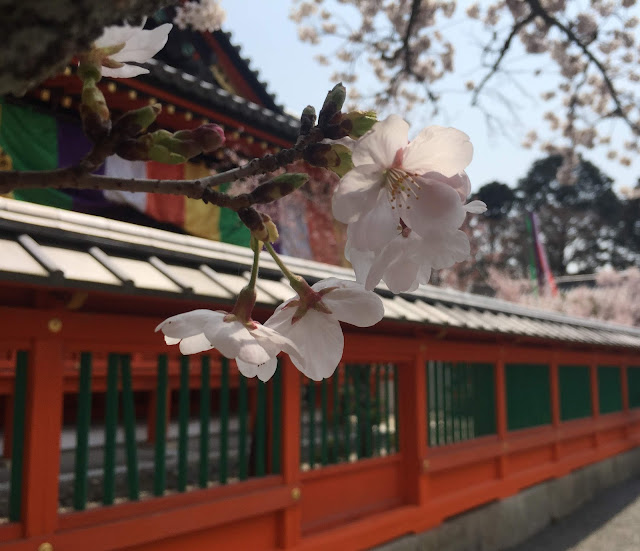 Yesterday in Google maps, I had seen that there is also an other hanami spot close to Daigoji, Kaijuji: 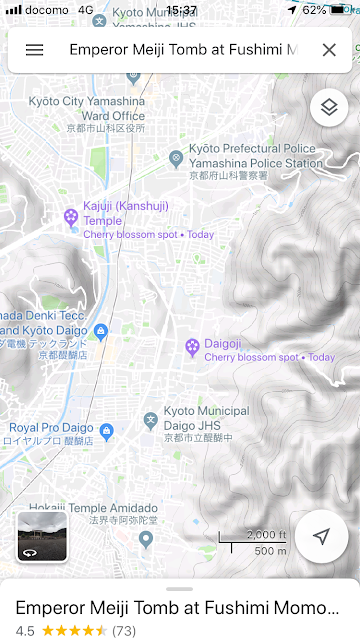 So when I had seen all the flowers at my first temple of the day, I took the same river as yesterday versus Kaijuji. Again a very nice temple with cherry blossoms just at their peak and as this place probably is less known by tourists, also in comparison much emptier... but nice nevertheless (or maybe because of lack of too many tourists). 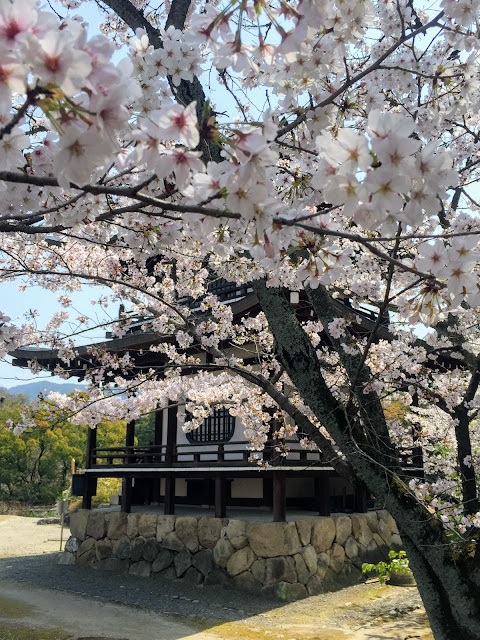 And then off to the most famous of the 3 temples of the day for cherry blossoms, Daigoji. Garmin had found me a slightly better route than yesterday (without a hill in between). This time there was enough time to buy the ticket and see everything. The temple consists of 3 large areas that are only accessible with a ticket. 2 of them are temple buildings and spots for hanami (and in autumn for koyo), one seems to be a museum only (which I didn't visit as I wanted to ride on and didn't really have such an interest into buddhistic art today.

Very romantic. Some areas of the temple were quite crowded, but actually around the temples themselves, there is enough space to enjoy it.

There is even a hike up a hill to the inner temples, which I didn't do, but must be nice at koyo times.

In my Garmin plan of yesterday I had also mapped in Mampukuji in Uji - actually not too far away - but it was shortly after 15:00 when I left Daigoji and I had already seen 3 magnificent temples and not so much time before sunset to get back home in Shin-Osaka, so I left it for an upcoming ride. Actually there are even more things already on my "to-do list" for that region, as there is a reconstructed castle close to Fushimi Inari and the mausoleum of the Meiji emperor.

Very close to this mausoleum I did however one more sightseeing today, by pure chance. I was riding and passed Momoyama-Minamiguchi station, when I saw a strangely shaped building right besides the station, which I had seen before while searching for modern architecture. It is a dental clinic build by Shin Takamatsu, build to resemble a steam engine. 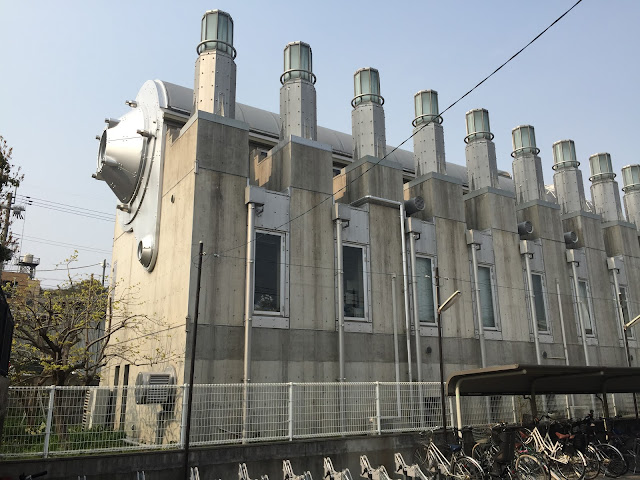 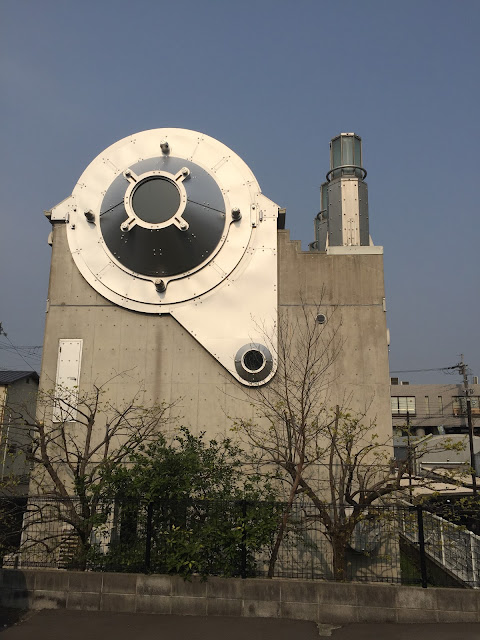 Riding further along, I passed by this Showa era sluice with a very small but nearly interactive museum: 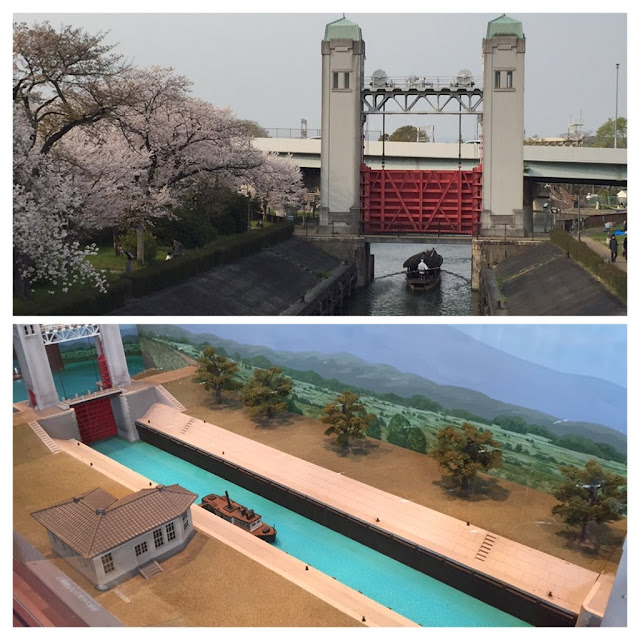 Returning I took the same river combination - Ujigawa and then Yodogawa as yesterday, but today it was in descent. I didn't really notice it yesterday that I was riding up all the time (although it is logical looking at the map), but riding downwards really made a difference. I even got a laurel wreath from Garmin for my fastest 40 km. Which must be completely due to a very fast ride from where Ujigawa joins Yodogawa. When I had arrived at the confluence it was already around 17:00 and from there it is still about 30 km to Shin-Osaka with a sunset coming up at 18:23! While riding to that point I had decided to try to ask some fellow cyclists (well, some race cycle cyclists) if there is a bike lane on the Ibaraki side of the Yodogawa river. At the confluence I found a group of cyclists that were taking a break there, asked and was informed that there is only one cyclelane on the other side (i.e. the same side I rode up yesterday or back in January when riding to Arashiyama). So now it was already a bit after 17:00 and I had 30 km in front of me, or a ride on a Keihan train to downtown Osaka, which was a back-up solution, but not my preferred choice. I didn't really expect to make it to Shin-Osaka when I set off at that junction, but thought that well, there were sufficient train stations not too far from the river, that I could try. The slight, but steady downhill combined with the good cycling lane helped me to speed along at about 27 km/h for 15 km or so:

Every now and then, however one has to stop, step off the bicycle and get through one of those annoying cycling obstacles. But well...

And last, but not least, thanks to Garmin, I finally found a good access road from where I am staying in Shin-Osaka to Yodogawa-river. I had tried in the past, and made it to the river (e.g. yesterday), but the access is a bit complicated. However taking the Kanzaki river was the solution. There is a perfect, small cycling lane along it, that brings me extremely close to temporary-home. Very convenient!

So overall an extremely successful day:


Perfect end for this weekend. Next weekend more.