After the brief stint in Tokyo, I am back in Kansai, in Inner Nara prefecture, in the same accommodation in Yamatoyagi, where I was already 1.5 years ago during my great trip through Japan.

In the morning I took a Shinkansen from Tokyo to Kyoto and then a normal train onwards to Tenri. Tokyo station was quite full, but everything well organized, and as I had bought my reserved seat already at the end of March, all very relaxed.

When I planned the route for today yesterday, I apparently had planned it to start in Nara... but I forgot, and throught I had planned it from Tenri. I only noticed the error when I started up the Garmin at Tenri station. But no problem, as the route was coming through Tenri, and actually looking at it in retrospect it was much better to start from Tenri than to add the additional kilometers for starting in Nara. The weather today was not very stable and finally around 17:00 it started raining, which was right the time when I finished my last temple of the day.

But let's start in Tenri. I followed my preplanned route and came to what I thought was the first attraction of the day, an ENORMOUS temple complex in Tenri. I think I have never seen in Japan a temple complex as large and as organized for masses of worshippers as this place. It somehow reminded me of the Vatican. I parked my bicycle in an enormous parking lot and went ahead with my touristic duties.

What i found was a large temple seemingly supposed to host thousands and thousands of worshipers. However when I arrived there were only a few, as attested by this picture with the shoes: 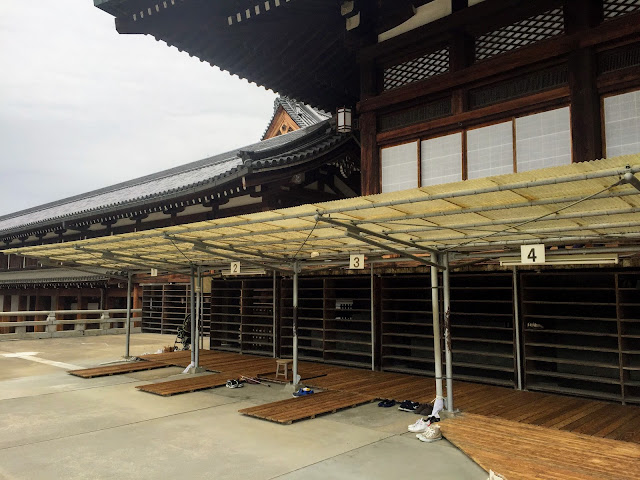 Inside an enormous tatami-clad hall, but nearly empty: 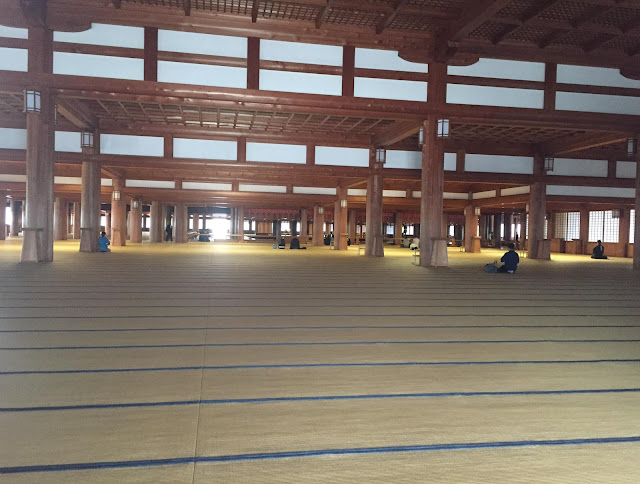 Nothing really interesting in that enormous hall though. At least for my tourist eyes.

I then continued on the "balcony" that surrounds the temple and only there I felt how big this complex really was. It isn't only this main hall but a lot of additional halls, a large courtyard (more about that one later) and in the surrounding many , large hotel type constructions. The hallway around the temple deserved special attention by the worshippers, going down to their knees, cleaning it. And yep, it was immaculate. 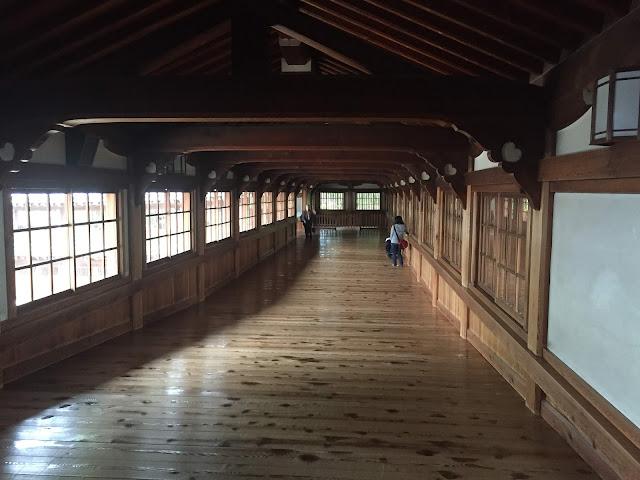 Initially I had this impression that something was going to happen, but yet nearly no one was here. That changed rapidly. Within a few minutes the courtyard filled with organized groups of people. All standing in a row behind their assigned group number. These worshippers were mainly students (in their sport uniforms and workers, in their respective work uniform).

At times this temple must get so busy that below there are entires numbered like in football stadiums.

I left the complex before the highlight of the day and continued to my first official destination, Isonokami shrine. When planning the route, I had in mind the Yamanobe Michi, which while being a hiking trail can be in a certain way emulated also on a bicycle. With a mountain bike the hiking trail itself would most likely also be ridable. I even managed to ride some parts with my brompton.

At this shrine instead of deer, it seems that chicken are venerated:

Apart from that peculiarity, it is a nice but to my eyes unremarkable shrine.

From there on, I loosely followed the Yamanobe no michi and came through very nice landscape with old, still quite well preserved villages along the way. 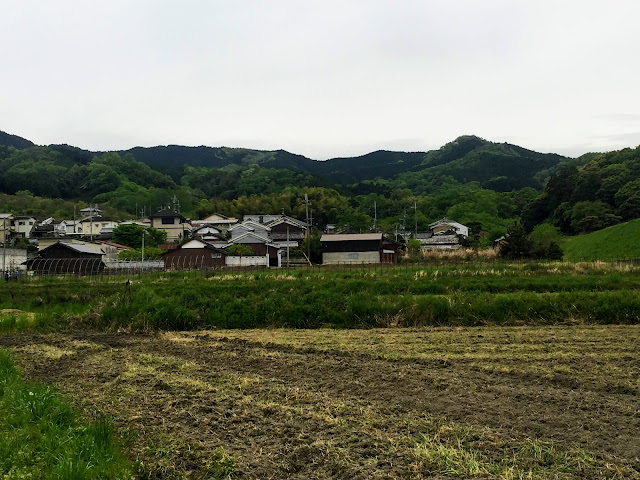 The region is well known for its autumn colours, but I would say that also in spring the different types of green on the mountains, are also very nice. In some fields these small pink flowers were blooming, and along the way I also saw a few wisteria in bloom. 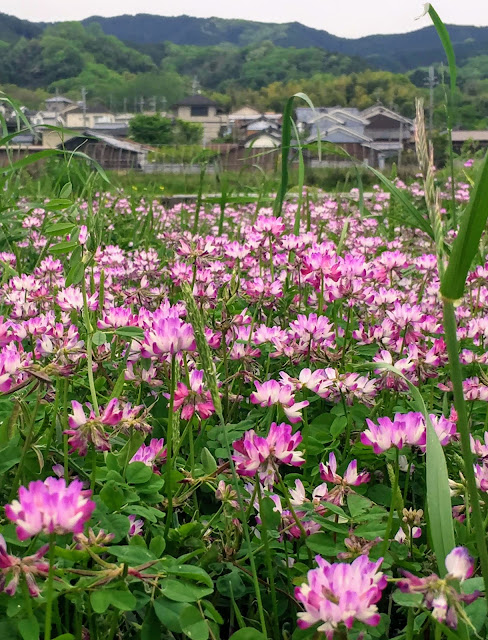 Further along the way, is Chogakuji, a very quaint temple in the middle of nature. I bought my entrance ticket from an old buddhist monk (?) who however was watching Judo in TV. 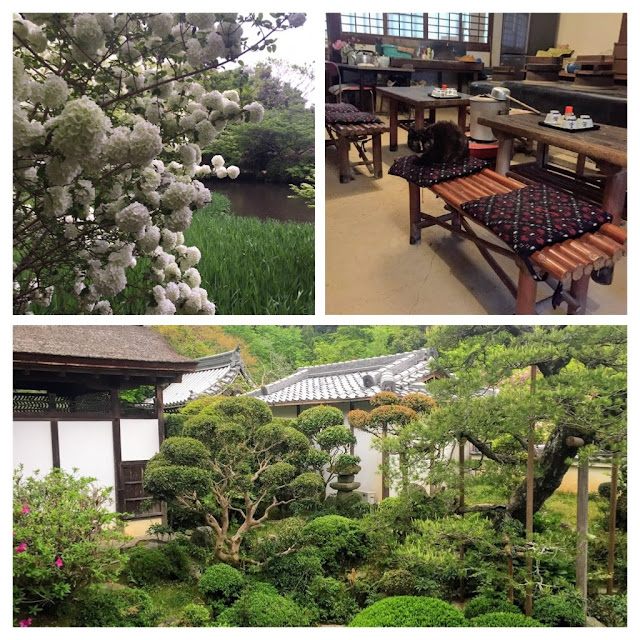 I had practically the entire temple to myself, we were essentially only two tourists at the temple. And this in Golden Week! However it is obviously not one of the main temples and it was starting to rain. Actually the very light rain transformed into a more persisting, yet still light rain. So after a quick visit, I retreated, searched for a spot under a roof to get me all dressed up. When I was last travelling through Japan in autumn 2017, my rain cloths were not up to the challenge. This time I only brought a rain cape, and at least with this relatively light rain it worked well. It doesn't get too hot under the cape, so no sweat that accumulates. However it also produces quite some wind resistance. On the positive side, however that with the helmet also the rain cape hood stays in place. So finally I managed to arrive at my accommodation dry.

I am repeating accommodation from 1.5 years ago, a small guest house in Yamato-Yagi which I quite liked. In the evening I went to a local restaurant here closeby and then worked on my blog posts, as well as on planning my next days.

For tomorrow, the first agenda point will be to go to Osaka (by train), in order to get a new brompton saddle. The old one broke when reassembling the bicycle in Tenri. Luckily I am not too far from bompton civilization and found even one in Tokyo, that had saddels. But tomorrow more about this. 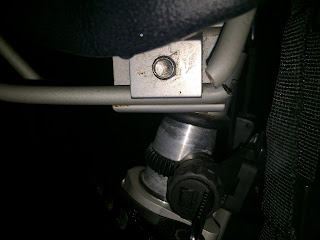