After the great success of the previous two rides to Kyoto without tourists (see here for Arashiyama and here for Kiyomizudera and Fushimi Inari Jinja), today was the turn of Kinkakuji and Ryoanji. Two more "must-see-spots" in Kyoto that are normally so overrun by tourists that they are hard to enjoy.

A few years back around New Years we went with some friends to Kyoto and visited both. Back then we made it a point to go to Ryoanji a few minutes before it opened, and yes, we had a good and relaxing time at the temple that day. But by the time we got to Kinkakuji (which is closeby), already the masses of tourists had started to arrive.

But not so today. Although I was at both spots in the afternoon, when they would normally be totally overrun by tourists, today both were extremely relaxing and nearly void of tourists. Thanks to Covid-19! 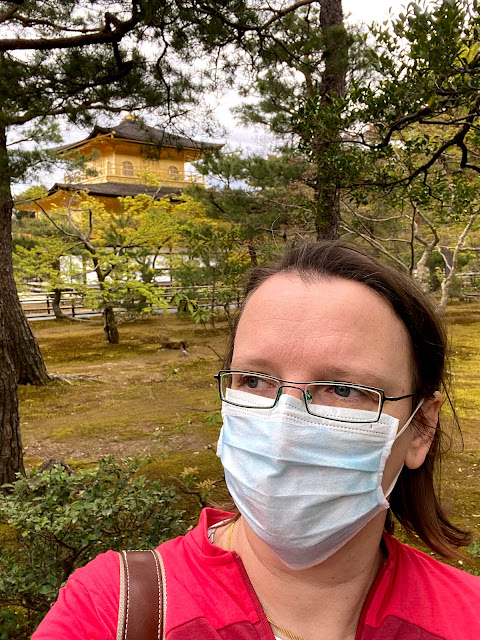 As the other times I went to Kyoto from Osaka, I first had to ride up the Yodogawa river. While the cherry flowers are now all but gone, the rapeseeds are in full bloom: 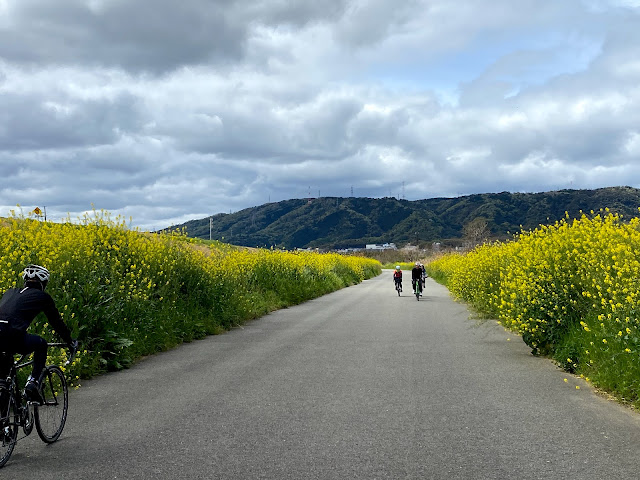 I had brought some onigiri with me, so I didn't need to get into a restaurant (they are still open during day time, but closing at night... but as we are all asked to limit our interactions with other people to the bare minimum, I opted for some onigiri that I had bought in the conbini below my monthly apartment (with my dinner yesterday night). I had them at the typical Sakura spot at the confluence or Kizugawa, Katsuragawa and Ujigawa and then continued on, on the typical bicycle path along the river, which I now have already taken innumerable times. Well, innumerable isn't really accurate. I guess I could still very well number how often I have been riding up and down Yodogawa (if I'd do some digging through my Strava data... but it kind of feels like innumerable, as it is always the same ride. But a convenient ride. Like bike-conbini.)

Kinkakuji did not disappoint: 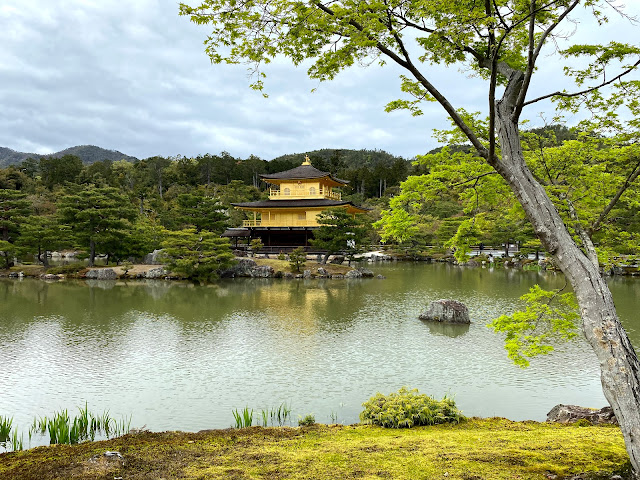 The below picture might not be the best of Kinkakuji, but it shows just how few people there were visiting. In normal times all this place would be absolutely teeming with tourist groups trying to take selfies. Today, I only had to wait a minute or so, so that even some people more in the back ground of the picture had walked out of frame. 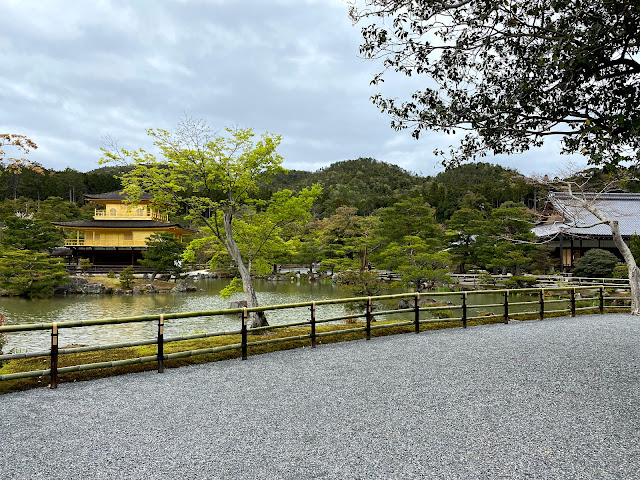 But probably this is my favorite picture, with the tree island in the lake in front of the golden temple reflected in the pond. Very Japanese indee. And if you don't know the actual dimensions those trees could be perfectly a bonsai. 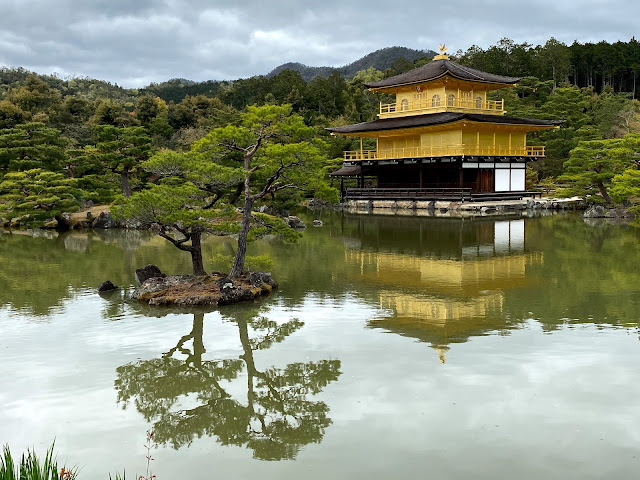 In Kinkakuji there is no temple interior to see, so it is really this one sight, which however is really rewarding, as long as you can enjoy it without crowds.

After this meditative experience I was briefly considering not to go to Ryoanji and head straight back, but then luckily decided to go. When will I ever get again this quiet experience at Ryoanji and anyway I had enough time to get back to Osaka... and if I would be too tired, well, I would "cheat" and hop on a train somewhere between Kyoto and Osaka. 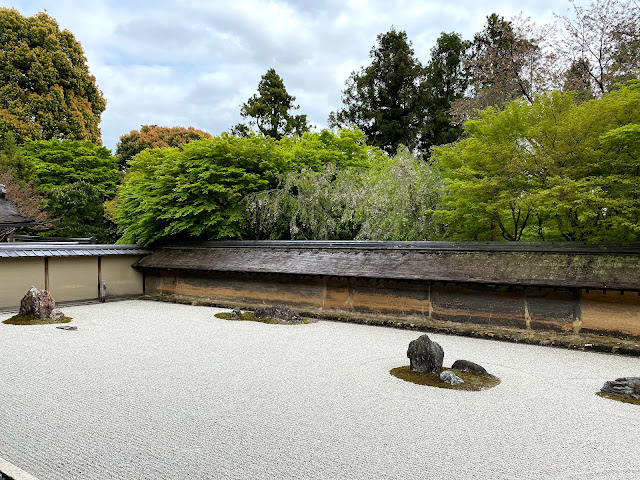 Ryoanji is mainly famous for this rock garden. There is actually more to the temple, with a garden... but well, it does not get paid enough attention due to this outstanding rock garden. And yes, it is probably the nicest of all rock gardens in Japan, at least one of the most strict ones. I cannot imagine that it is enjoyable with hordes of tourists, as the enjoyment of this space is its quiet, meditative atmosphere. So in normal times, I would not want to visit it anymore. There are other, much less famous rock gardens, that one can admire with the needed tranquility. But today, I had to share this space only with a few other tourists. All admiring in ewe the rocks. 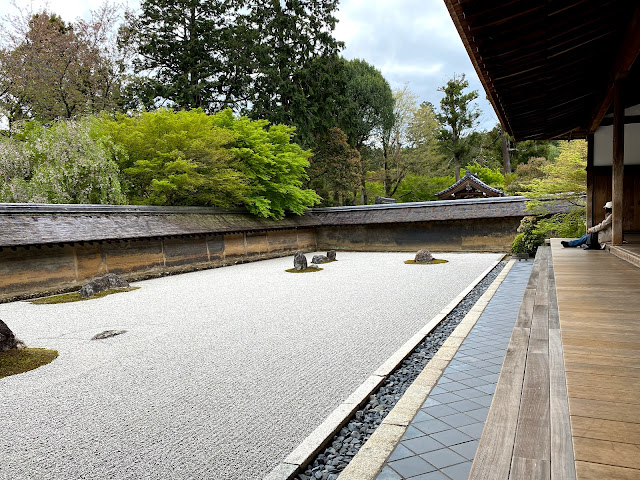 Only the cherry tree had already nearly lost all its flowers.

Proof of the number of visitors: 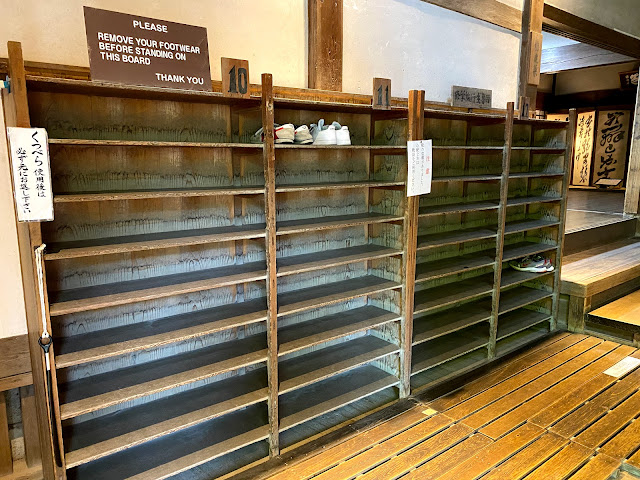 This is the actually quiet nice pond which also is part of the Ryoanji temple complex... but does not get duly admired. 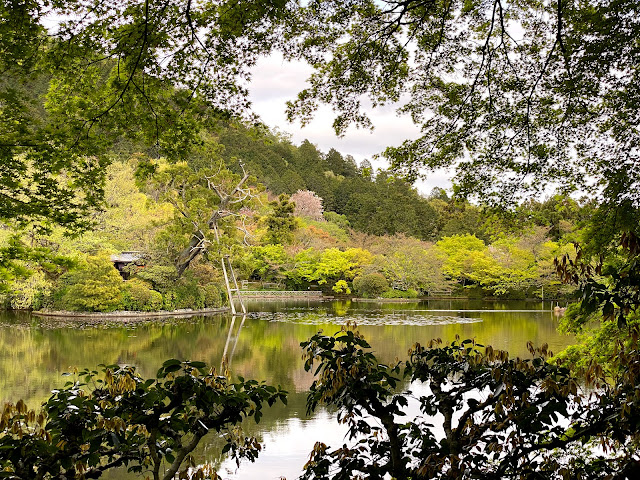 Komoot had done a great job in finding a good approach to the area with one nearly straight and small street through Kyoto up the hill. On my way back, I had tweaked the route in order to ride through another temple complex, Myoshinji temple. This is a huge temple complex, which feels like a small city, maybe a bit like the forbidden city in Beijing. I like that place, but today I definitely did not have enough time to stop and enjoy it... and this place anyway is also enjoyable with tourists as it does not get that overloaded. So a good place for a future excursion. I took however one, relatively uninspired picture of the place. 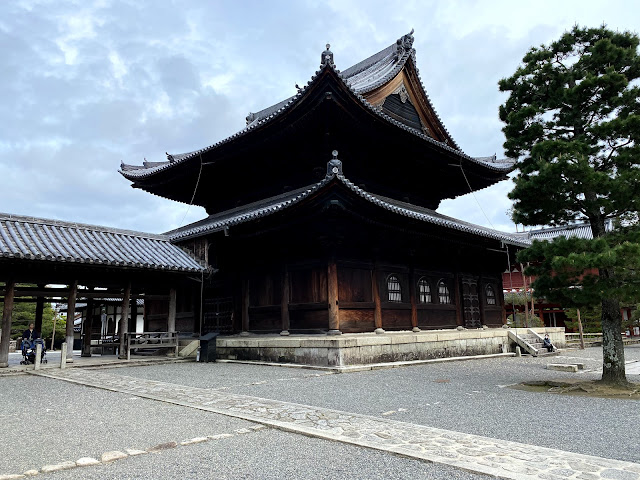 Riding back, again along the rivers, I decided to take this double bridge, with a dedicated bike lane and then ride down the Yodogawa river on the Shin-Osaka side. 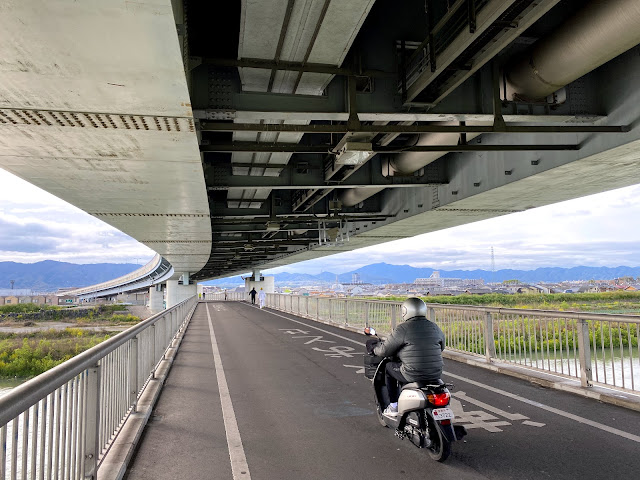 The region around Oyamazaki is fully dedicated to transportation:


Not nice... but connecting. Just a few meters after this bridge traffic craziness on a bicycle one turns left, onto the river paths and away from traffic all the way to Shin-Osaka. Incredible!