Very hard to pick the picture of today. Was it Kiyomizudera, just reopened a few weeks ago after extensive restoration in time for the 2020 Olympics? Or was it the torii tunnel at Fushimi Inari Shrine void of tourist masses one of the places that left a most lasting impression on me when I first visited 25 years ago? Or was it my second ever 100 km ride? 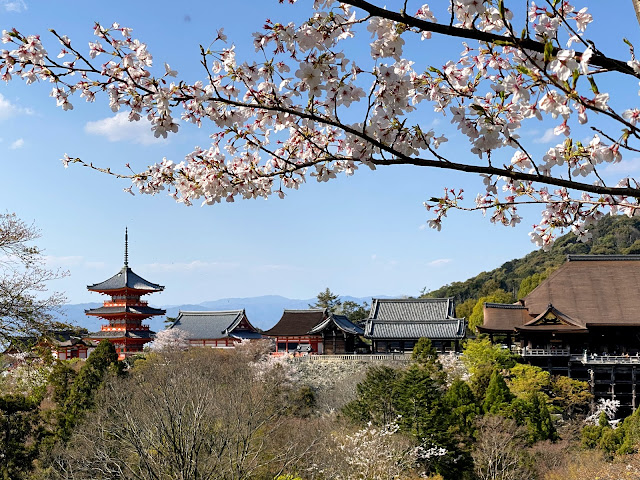 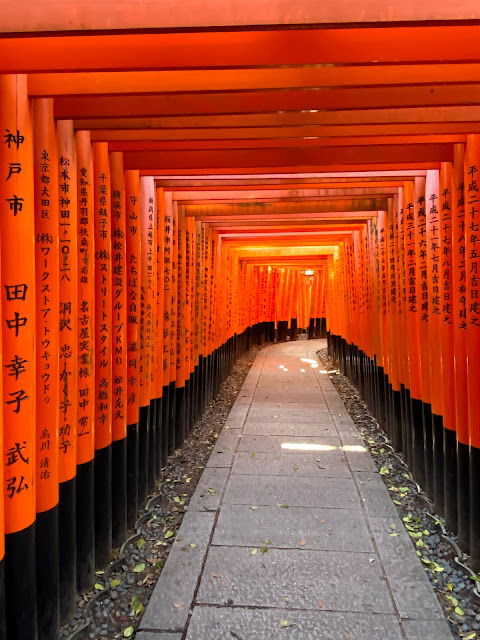 Today's ride was courtesy of Covid-19, which cancelled a 2 day ride I had signed up earlier this week on Naoshima with a local Osaka group of cyclists and which made that two of the most popular sightseeing spots in Kyoto, Kiyomizudera and Fushimi Inari were very pleasant without too many tourists. Japan is in a special situation, it banned Chinese tourists very early on, then tourists from other countries were afraid of catching Covid-19 in Japan and started to cancel their trips probably from around mid Feb, early March and at end of March Japan imposed a travel ban on practically all Europeans, Americans, Chinese, Korean... So essentially there are no foreign tourists in Japan. Plus many Japanese, but by far not all, have obeyed and stayed away from too crowded areas, which means, that normally crowded areas aren't crowded at all, and I would say social distancing (about 2 m apart) is doable practically everywhere most of the time.

So I used all this to ride up to Kyoto. The first part of the ride was a rather uneventful ride up the Yodogawa river, today on the left side of the river with a nice and strong tailwind resulting in a maximum speed of 39.2 km at some point.

For lunch I stopped at the hanami spot where I passed already last weekend (and last year), and although the weather was much better today than last Sunday, there were still very few visitors, and picnic was officially not allowed. But a few people did very small picnics. 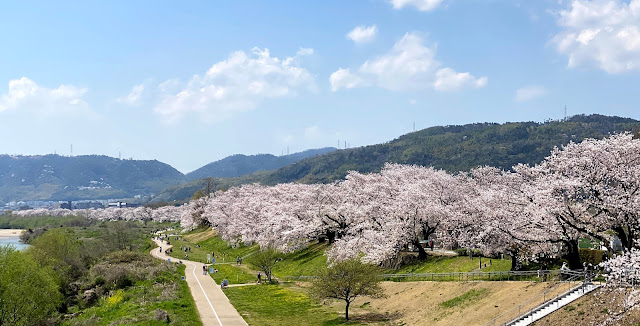 I unpacked my rice roll and had my lunch under the cherry trees that start shedding their petals. Very romantic.


After lunch I continued on a new river, which I am pretty sure I have never ridden before and came through an other very nice hanami spot while riding into Kyoto. The only thing about this bicycle lane is that the tarmac isn't very smooth. 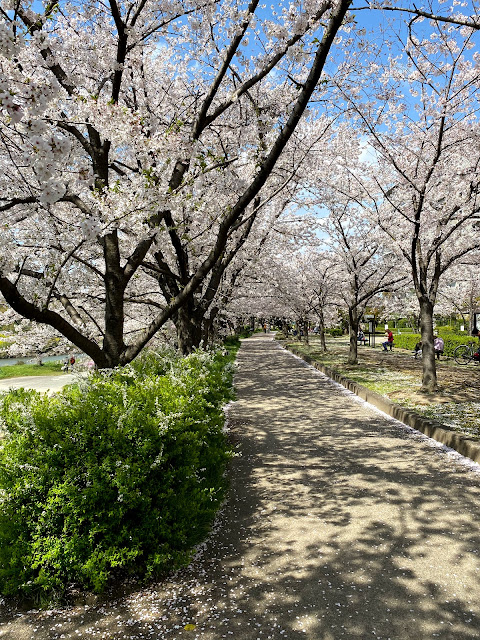 I turned away from the river and up a small hill to Kiyomizudera, which was splendid today. Sakura in full bloom, perfect weather and few tourists. Couldn't have been better. 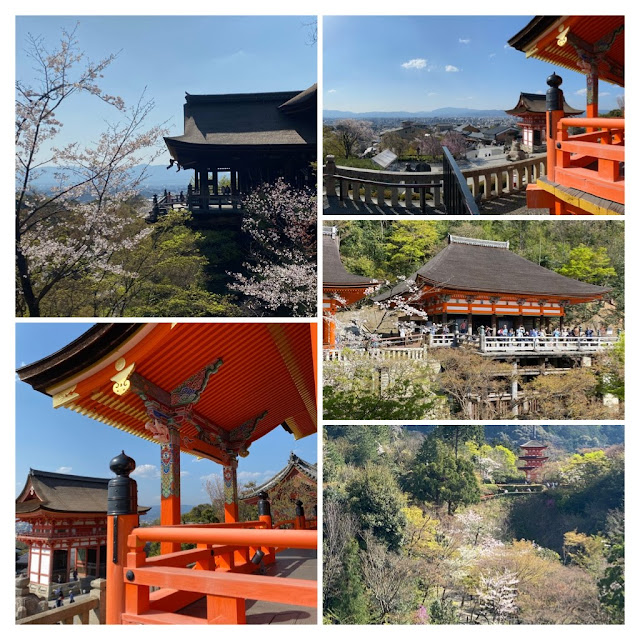 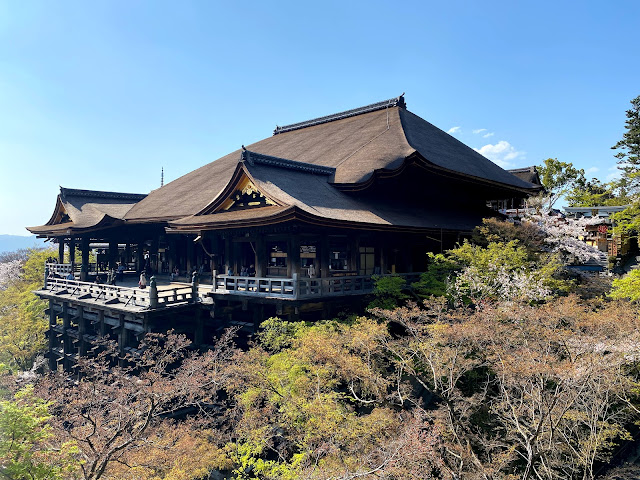 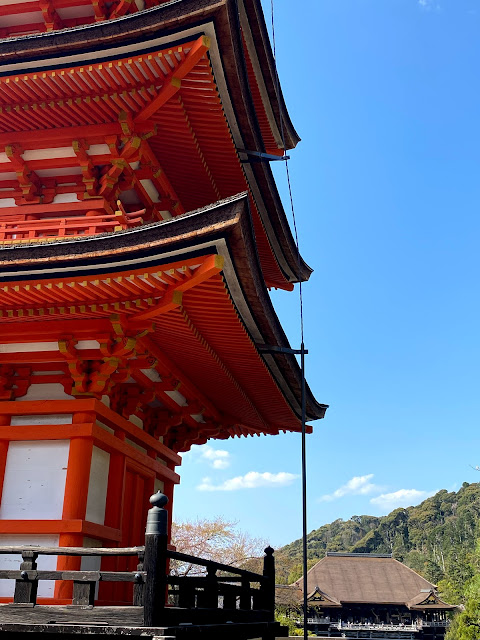 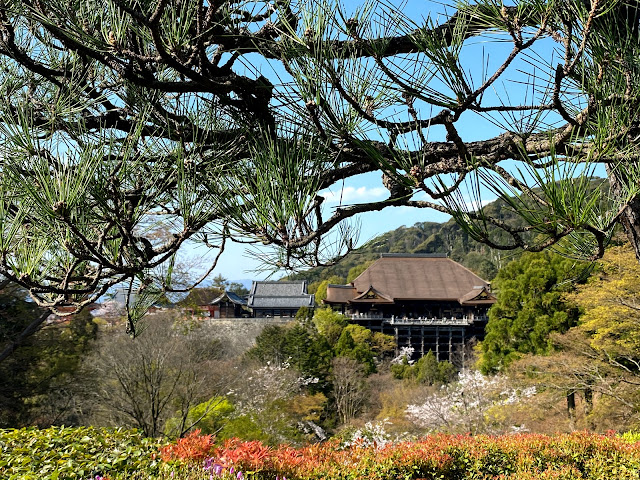 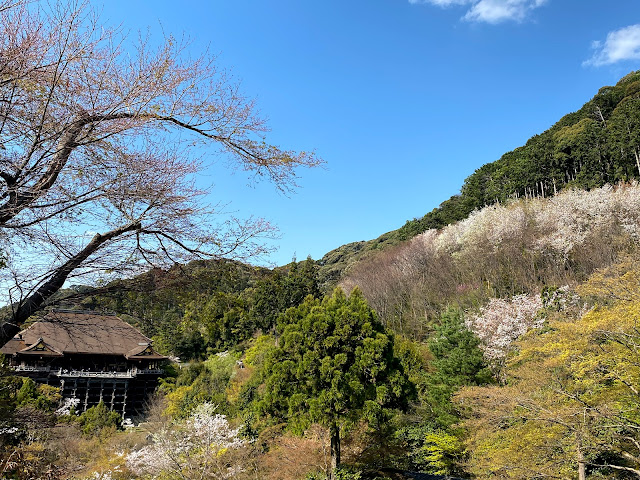 Before leaving Kiyomizudera I had a small snack of these very fresh sweet gel-like "noodles", which I like quite a lot. 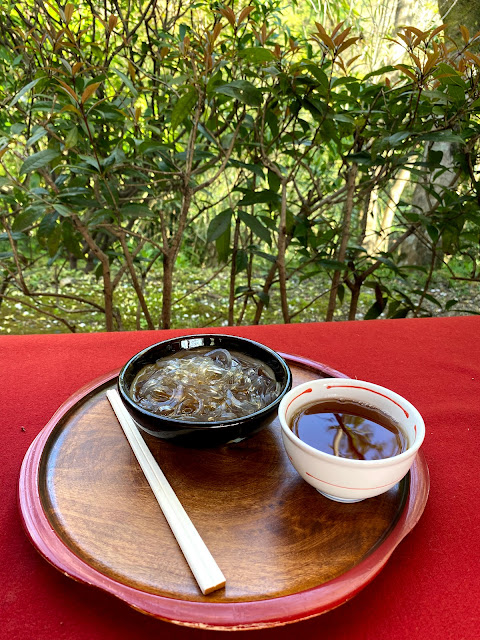 And then on over a romantic bridge ... 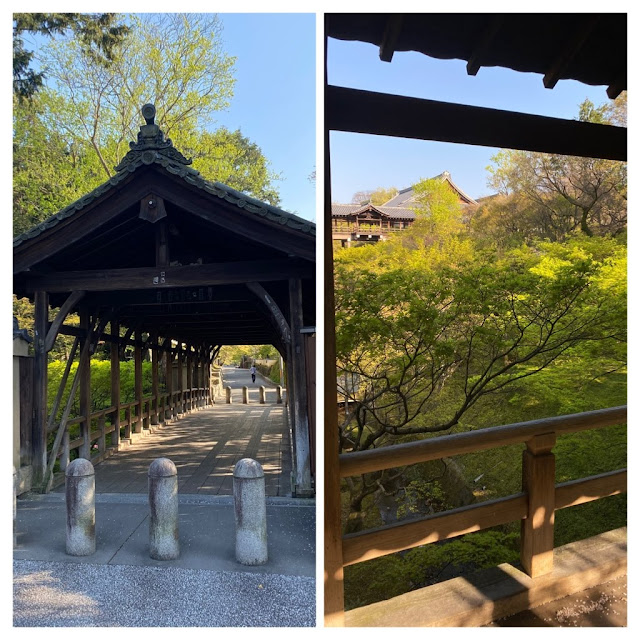 ... and through a neighborhood full of temples to Fushimi Inari.

Fushimi Inari is definitely my preferred shrine in Japan. When I first visited it 25 years ago the torii tunnel left a deep impression on me. Japan had much less tourists then, and I know that I took some pictures very similar as today, with the tunnel of torii without anyone. Something that in normal times nowadays seems to be completely impossible, as this shrine has got so popular that it is incredibly crowded every day... except now with no tourists around. I went again a few years back (I think 2015) right after New Year and the shrine was incredibly busy with business men making their annual offering. This was also a very nice and unique experience. But I am very happy to have seen it again very empty.

The one thing I did not know 25 years ago, is that those torii are not purely for decoration. They are offered by companies to the shrine for their success. And actually somewhere in all this forest of torii there is a price list for torii's.

While the front of each torii only says 納奉, which probably means something like paid offer... 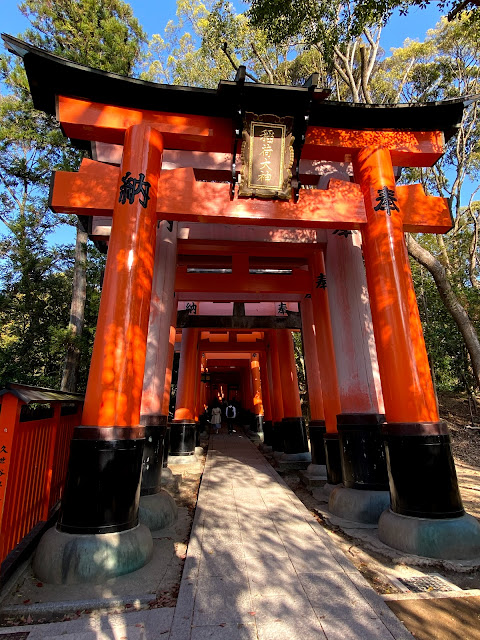 ... the backside of each torii says precisely which company (or individual) paid for the torii ... 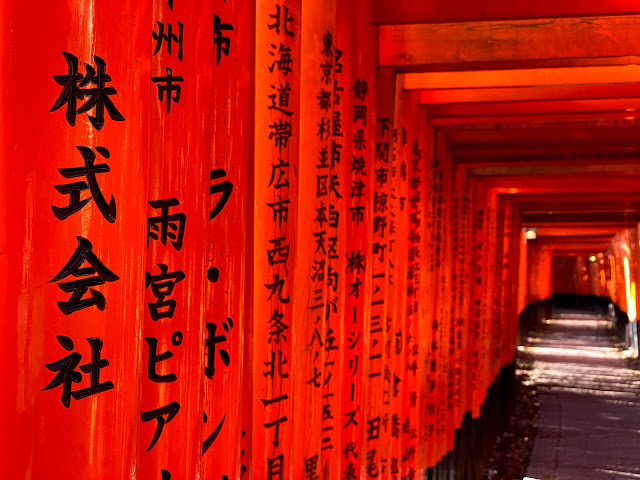 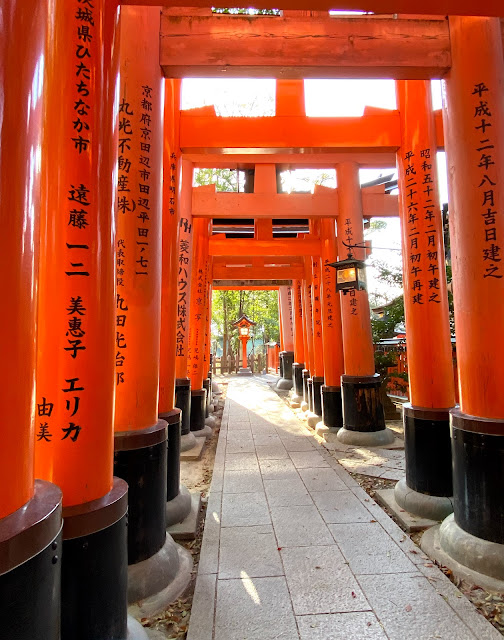 Down at the shrine itself, there were products of the main patrons of the shrine exhibited. Mostly sake, but it is not limited to this. There was also milk, snacks, chocolate, beer ... 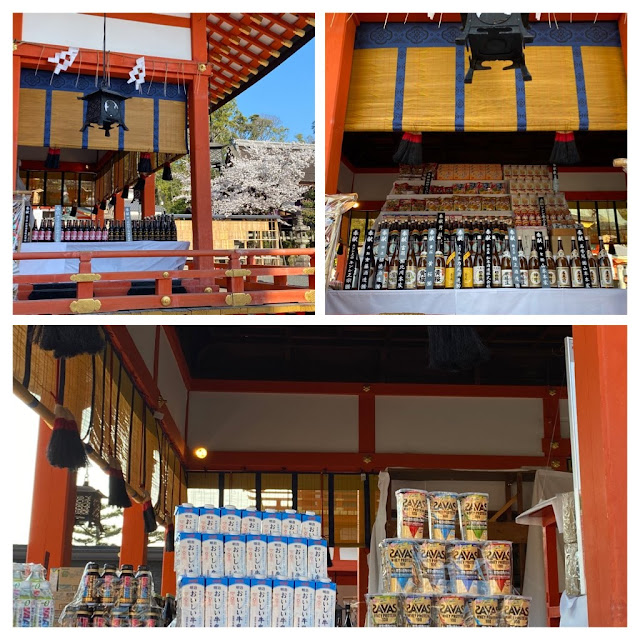 When we were here at New Years a few years back the shrine looked much more like a supermarket than a shrine with all possible offerings, including kleenex tissues... 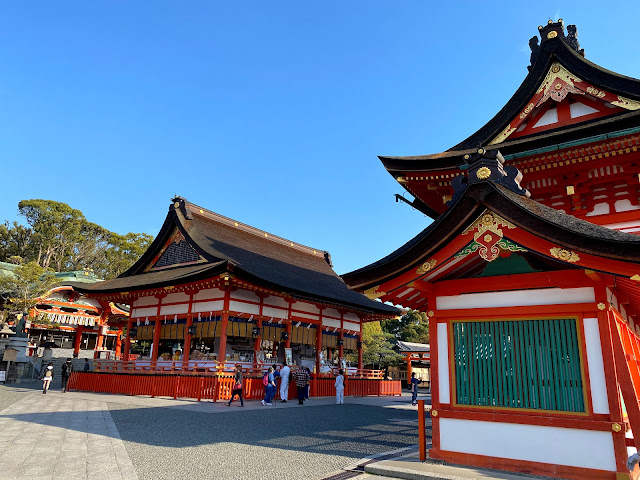 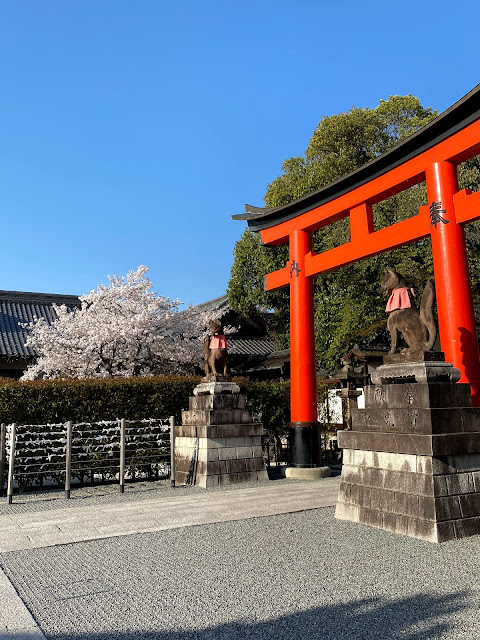 At around 17:00 I left the shrine. Actually quite late, knowing that the way back was still over 40 km and that the wind was against me. But I had a back-up plan. I could hop on a train somewhere along the Yodogawa and get back to Osaka, if I got too tired or it got too late.

But after struggling a bit against the wind before the Sakura spot on the river confluence, from there onwards down the Yodogawa it was much less windy. Looking at the strava map it seems I went in a quite perfect straight line, so wind should have been strong on Yodogawa as well, but maybe it turned or was channelled by the parallel mountains along the river in some other way. 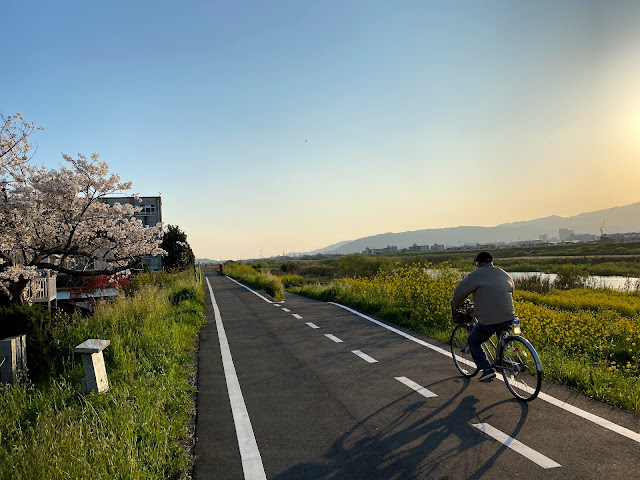 I reached the sakura spot shortly before sunset. 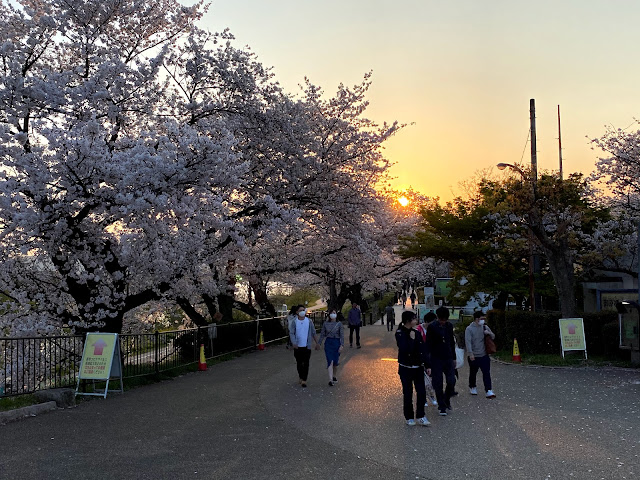 Which inevitably means that it got dark along the way down to Osaka as it is still about 30 km from there back to Osaka. But weather was nice and I was making good progress along the river, and I did not need to search for my way (which at night even with garmin isn't that easy as the screen continues to go dark) so I made it back all the way to Osaka and to "my" onsen in Naniwa where I relaxed my tired legs in the hot water and had dinner afterwards.

At that point I was at 95 km... So now I had the ambition to make it to 100 km today... but it was only about 3 km from there back to my apartment... so after the bath and dinner I took a small detour to see some night sakura along the river. 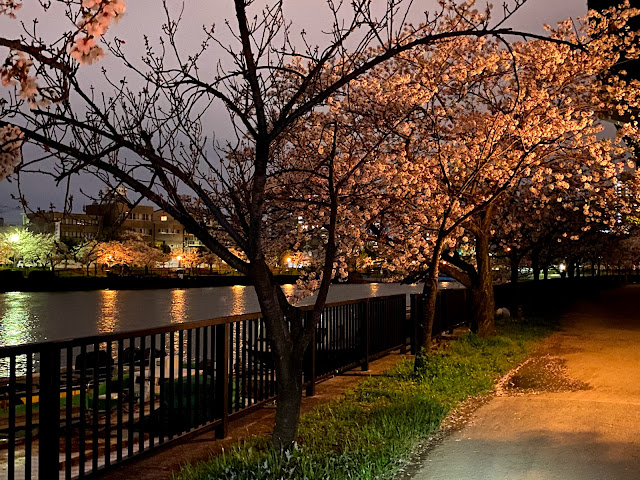 Right on the bridge over the Yodogawa I then completed my second ever 100 km ride. (the other was last year September in the Netherlands. )