Although since earlier this week there are some restrictions in place in Osaka (among other prefectures), going out to do sport is still perfectly allowed, and I was definitely not alone, although kept to myself.

After the great experience last weekend in Kyoto and Nara without tourists, I decided to give Kyoto (this time Arashiyama) another try. I had a few other rides also planned more local in Osaka, but will do those some time in the future.

Today's highlight was definitely the Arashiyama bamboo grove without tourists: 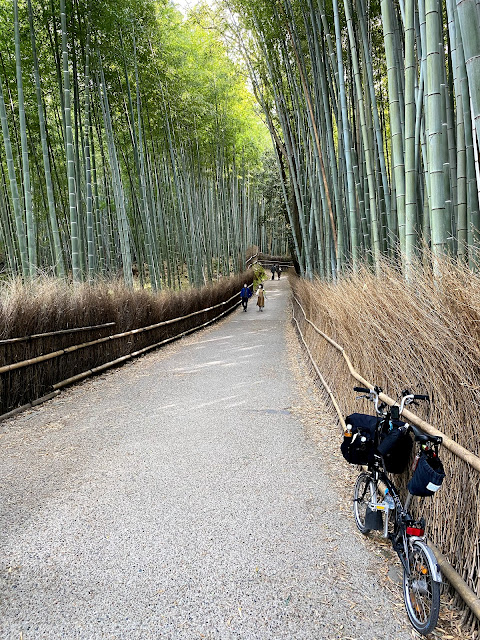 Normally nowadays this bamboo grove is just packed with tourists. So much, that it can easily seem that there are more tourists than bamboo around. But not so today. But before I got there... I needed to ride up again the Yodogawa River.

There were definitely less people around than in the last 2 weekends, specially less people doing picnics, but still some groups playing baseball, rugby, tennis or football, which technically is allowed as the web page of the local government exercise is one of the examples of necessary activities for daily lives, as long as done with the smallest number of people attending... so 22 for football... 1 for cycling. Although I have to say, I saw a few cyclists in groups. Mostly it was probably families, but some were clearly riding buddies (unless there is a unknown subculture of polyamorous gay men in Osaka and around).

I came again to the hanami spot at the confluence of Kizugawa, Ujigawa and Katsuragawa where they form Yodogawa and it was clear that mankai 満開 was last week.
But still, some nice hanami shots: 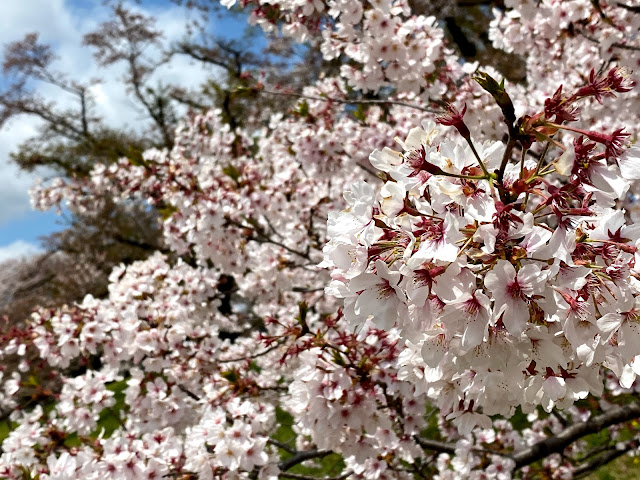 As mankai was over, the path leading out into the peninsula was open for cyclists. I didn't need a second invitation and rode it. Probably the first 2 extra km of today.

I continued on on the same river as last weekend, after a while transferring to yet another river, that brought me smack into the center of Arashiyama and over the Togetsu bridge: 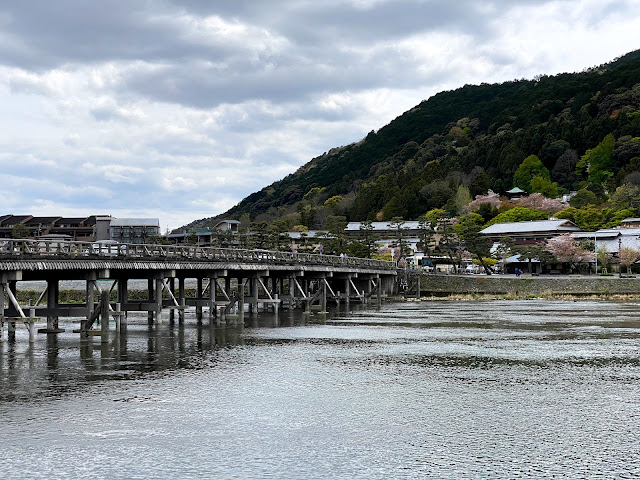 Last time I was here was right after a massive typhoon had hit Kansai and destroyed the bridge to Kansai airport (from where I was supposed to leave a few days after the typhoon). As that didn't happen, I decided that weekend to go to Arashiyama (by train), ride around on a rented mamachari and explore the lesser known (and much less touristy areas) of Arashiyama, which was a nice ride, although I got my feet wet on the river banks riding through some puddles that profed deeper than I thought.

Today, the river was well within its shoulders. While riding up the river and getting to the 50 km mark, I was getting hungry. Not too hungry, but well, hungry. So I discussed with me my options but finally decided to make it until Arashiyama, as I remembered that a few years back (maybe 10?) we had a very nice vegetarian lunch in a restaurant in a temple (Tenryuji). The restaurant was still open, just if they had waited for me, one of their few customers of the day, and definitely the only one to make it to their door after 13:15 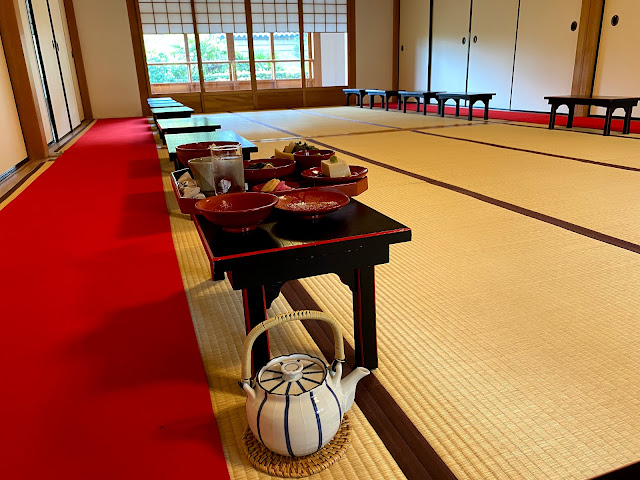 After lunch I explored the gardens of the temple, which are apparently dating back to the 14th century when this place first was a palace and then became a temple. Today for sure one could admire the garden as it must have been 700 years ago. Quietly sitting on the veranda, gazing out over the pond into the hills where some cherry trees are flowering. 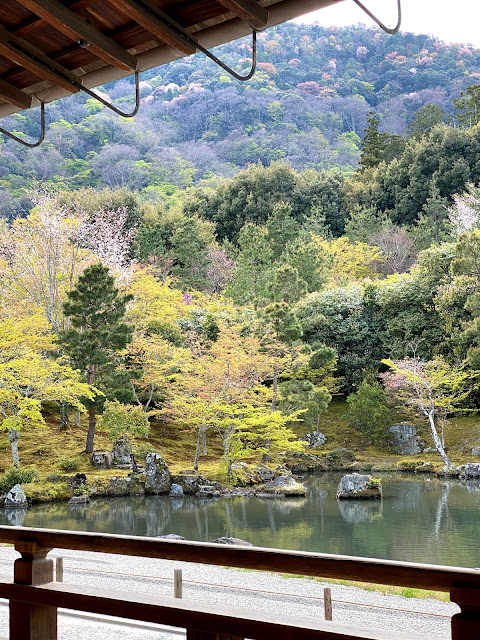 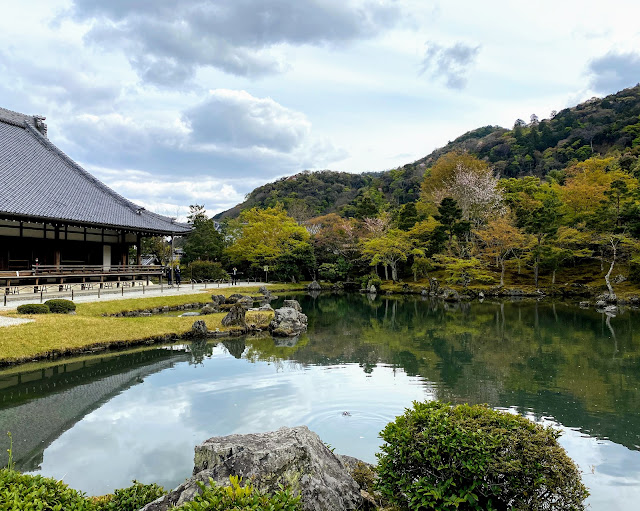 Also across the rest of the garden more trees were flowering, most prominently the rhododendrons. 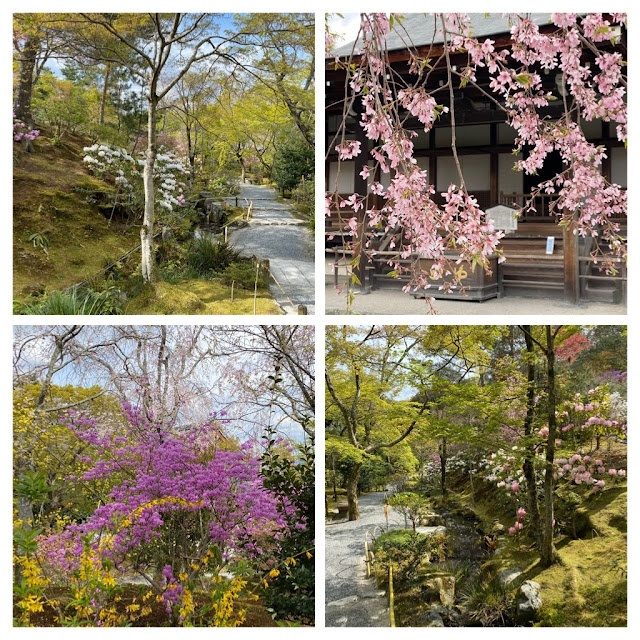 I would say that today there were more employees around (gardeners working on their knees with tiny knives weeding out invisible weed and guards who had no one to guard or amonish) .... 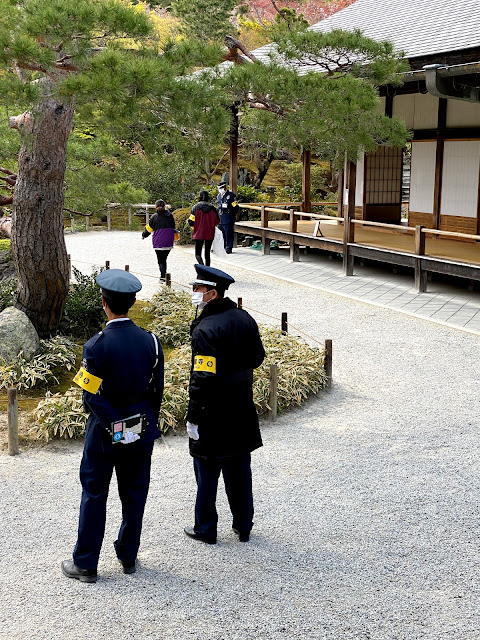 ... than tourists.
... okay, the shoe picture is slightly tricked. There was one more rack for shoes just behind me, where there were actually 3 other pairs of shoes. So no, I was not totally alone in the temple.

In total, lunch included I spent 2 hours at this temple complex, feeding, relaxing, taking pictures. I even paid the extra entrance fee for the Dharma Hall where a dragon on the ceiling will follow each of your steps... and watches carefully that no one takes a picture of it.

So now it was nearly 15:30 and I knew I needed to get moving back, did I want to make it back to Osaka before nightfall (or at least back to the onsen of choice of the day). But I could not leave Arashiyama without a quick peak to the famous bamboo grove. Last time I was here, it was packed with tourists, and I just had a quick peak and no picture. This time tourists were sparse. 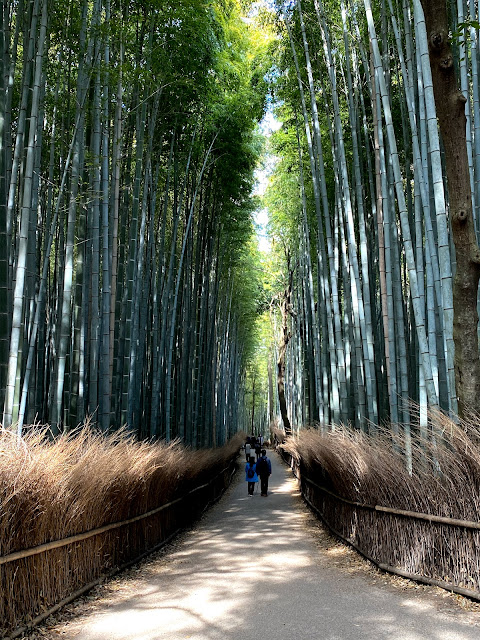 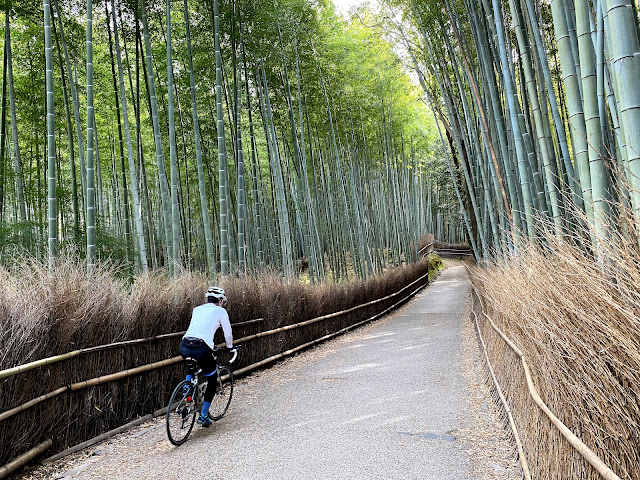 Normally this path is no longer ridable with a bicycle due to the masses of tourists walking through. But today even this was possible. I met the guy in this picture a few kilometers later as we were both riding back towards Osaka (only he had 20 km less than me before him), right when we both were trying to take a picture of a shinkansen and hanami:

The ride back along the rivers was eventless. I stopped for a quick snack at the hanami spot, where there is a rest area for cyclists and then continued down the Yodogawa river, where I noticed this bicycle cemetery that I must have passed already quite often, without ever noticing it properly. 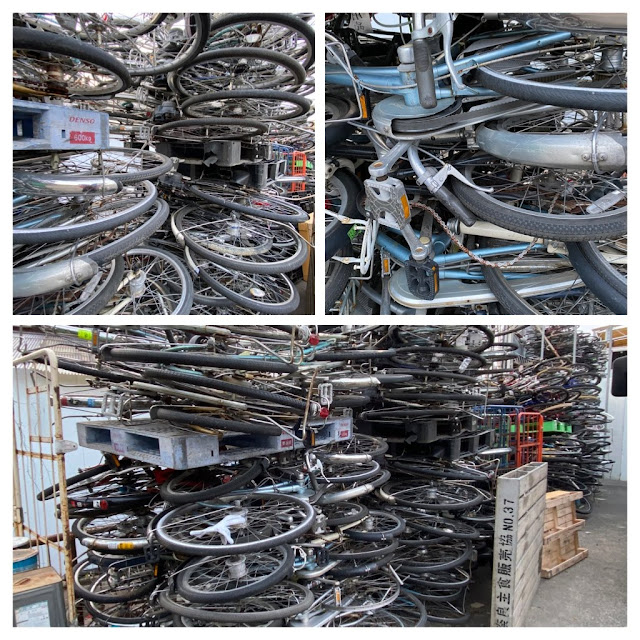 I passed through some more of these terribly annoying roadblocks ... 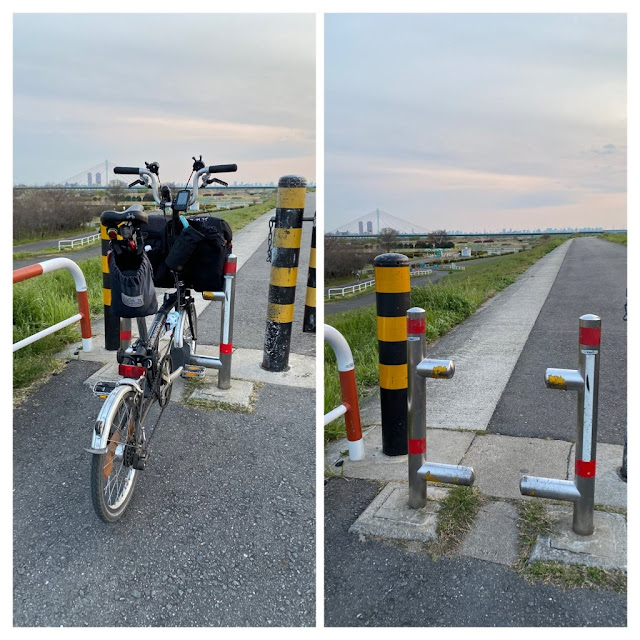 ... before heading "inland" to my choice of onsen of the day, a onsen of the same chain I went to yesterday in Amagasaki. This one however a bit newer. I had a great relax in the different outside pools, including one lie down option on stones with hot water flowing over it, and just made it in time for last order to their restaurant for my solitary dinner.

The plan for Arashiyama was a 108 km ride, which I knew was doable, after the 101 km ride last week to Kiyomizudera. I got up a bit earlier than normal and was out on the road at 9:00 (early for me... late for many others), which gave me the full day ahead. Also I didn't have a heavy sightseeing plan due to Covid-19 but also due to the fact that I needed to ride all the way back, if I didn't want to cheat on the restrictions to only do essential travel. But my timing was perfect arriving at the onsen only shortly after it became dark.

While I road at the beginning of the day I thought, well, 111 km would be a nice number, knowing that there are always a few extra km that one rides by missing a right turn or by just straying off the route. However during my dinner at the onsen, I looked at the date, 11th of April and first thought, oh perfect 111 km on the 11th, is a nice number, until I realized that 114 km on the 11/4 would be even nicer. So that's why I did a few extra loops just below my house - no Strava art :-) 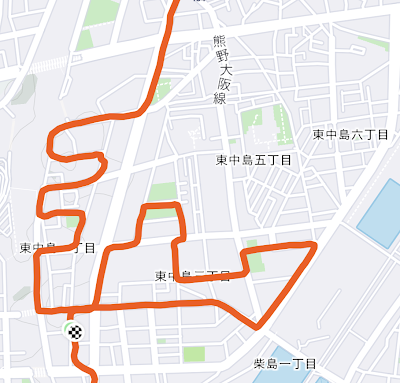 And oh yes, it was my longest ride ever, by a whole 7 km!

Tomorrow it will rain. So a rest day, and time to write some posts.