Unbeknown to me at the time of the ride, this turned out to be my very last visit to an onsen for this trip to Japan. Not because I hadn't wanted to go again after the long rides on the upcoming weekend, but due to Covid-19. The government must have asked Onsen owners to close their doors as well. Understandable. It is after all a closed space where people come together. No idea if the coronavirus like humid and hot (probably not, at least the hope is that over the summer it will go away due to the temperature), but it seemed a sensitive move to close sentos & onsen in order to avoid people coming together.

But on the day of this ride, onsen were still open.

I had seen on the map two rivers branching off the Kanzaki river and actually tried them the day before. Only that then I had forgotten my head & taillight, so I needed to make do with a much inferior lamp that I have permanently mounted to the bicycle. But the light it gives is not really good for seeing. Only for "being seen". So the day before I did ride very slowly as I was able to see only for a few meters. But today, lamps were on, so I could really ride.

Along both rivers are small streets that are mostly used by cyclists only. And then one comes to a quite big park, which I actually did not visit, just circumnavigated it, before searching for a way back to the second river and back down versus the more known part of Osaka and my onsen of the day.

Some last hanami along a river... 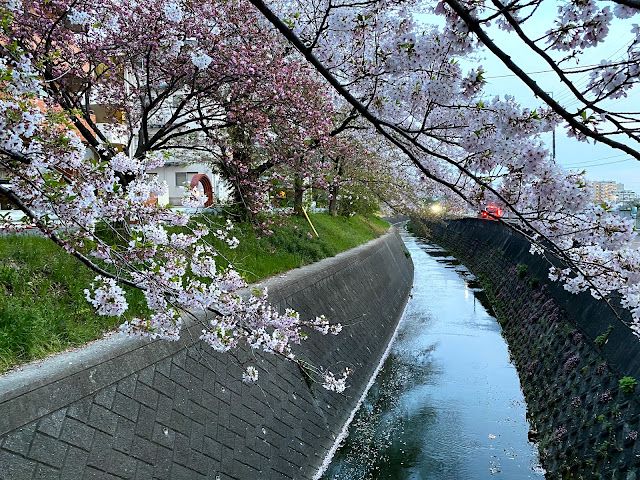 And the sunset between some high rise buildings. 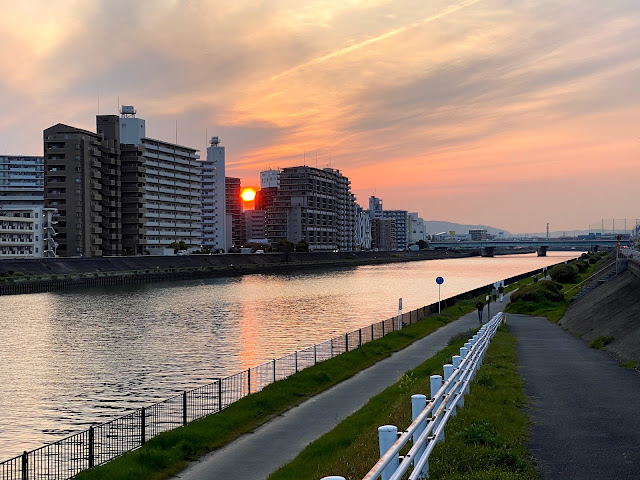 The cycling was nice, and it definitely seems like a good way to approach Minoh park. Probably nicer even than the river out to Itami, because while that ride is longer it also leaves one more far from the entrance into Minoh-park... but this time not mountains were my goal but the deep hot waters of the onsen.