Originally for today the picnic ride with my friends from the NPC was planned, but due to Covid-19 pandemic it was cancelled a few weeks ago. What a pity, today would have been the perfect weather for a picnic. Not like last year when it was cold and rainy and we had to do our "picnic" in our favorite Taiwanese restaurant. But at least we could do it and enjoy the time together.

When I was thinking yesterday where to ride in order to start and finish in Shinbashi without the need for any train, I remembered the Yamanote line ride we did with the NPC a few years back in August during an entire night. It was actually my last ride before starting on my two months adventure through Japan. And it was the test ride with all my luggage.

In the initial part of the ride I came through some small neighbourhoods with their temples and shopping streets around Shinagawa: 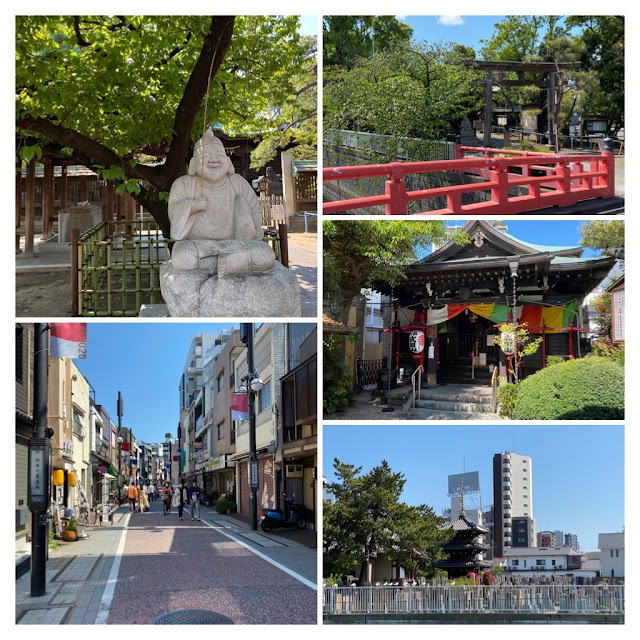 In that shopping street about half of the shops were open. The restaurants mainly seemed to do take-out. And a barber had decided to sell his face masks at about 100 yen per piece. In one shop they also claimed to sell self made ones, but one needed to order them.

I continued on along Meguro river where the cherry blossoms have been replaced by azalea: 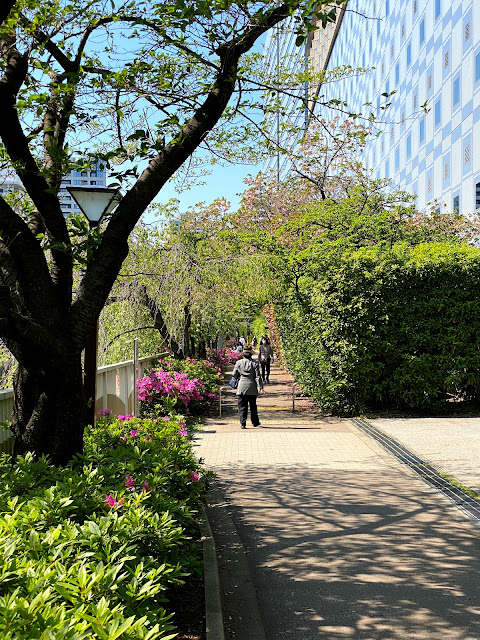 Shortly before Meguro I came by this temple. I really only stopped there, because the slope was so steep that I only managed to ride until there before getting of and pushing... so as I was off the bike anyway... well, I could as well visit the temple. The outstanding feature was this small buddha completely covered in gold. But not expertly, but rather in a DIY style by the worshippers themselves. One could (not now, but in normal times) buy some gold leaves and then apply them on the Buddha... 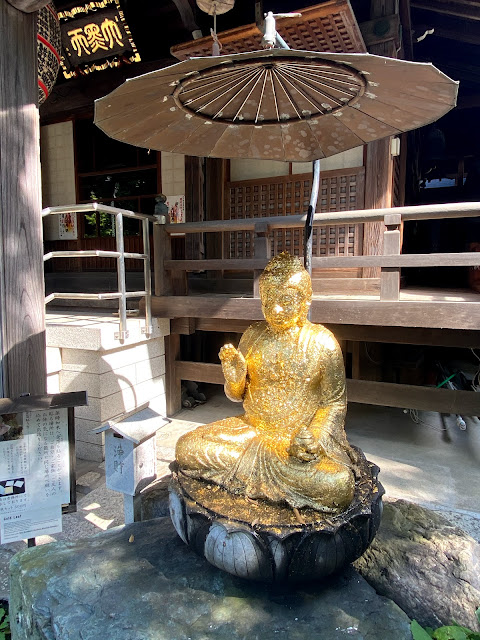 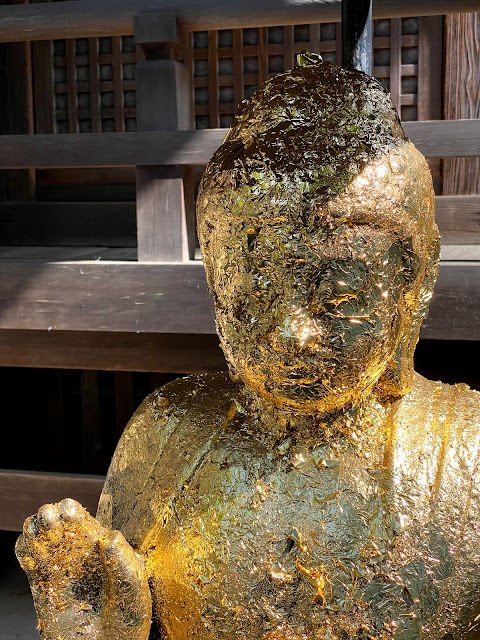 ... in theory on the place of the body that one wanted to cure... but I have some doubts that there is the same amount of people that have head pains than people that have pains in the middle of their left lower leg...

From this oasis of tranquility to the normally crazy busy part of Tokyo: Shibuya!

Although the government of Tokyo is urging people to stay at home, people were around. Walking, jogging, cycling but also doing grocery or other shopping. However compared to any normal Saturday Shibuya crossing was very empty. All department stores, cinemas, museums, pachinko parlors, music venues... are all closed, so in Shibuya there isn't much to do. But in the more local neighbourhoods people are around to enjoy the sun and flowers or simply to do some shopping. 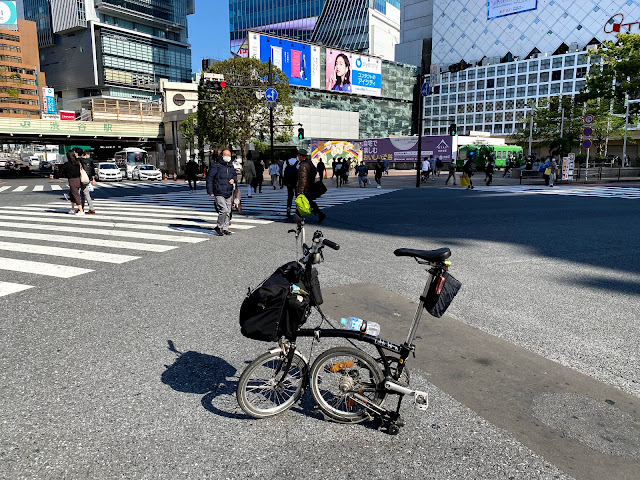 After Shibuya my next picture stop was Meiji shrine just besides the newly build Harajuku station. 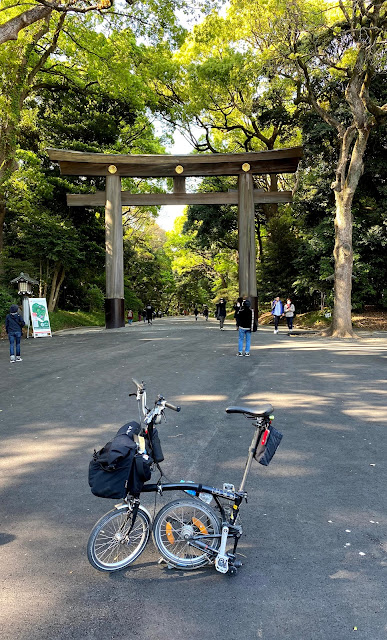 But then on through the Northern parts of the city. It is easy to think that Tokyo is a huge metropolis full of skyscrapers, but actually most parts of Tokyo are pretty low-rise. Only that this time I didn't take any picture of that part of Tokyo. I took some pictures of a really interesting architecture (left up), of an exposition of houses (right up) and a very dilapidated sento. 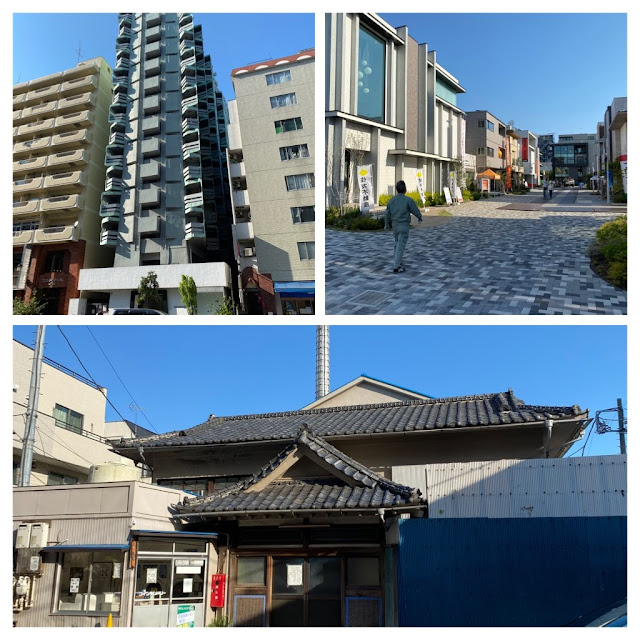 As it was a ride very closely along the Yamanote line I obviously also took pictures of trains: 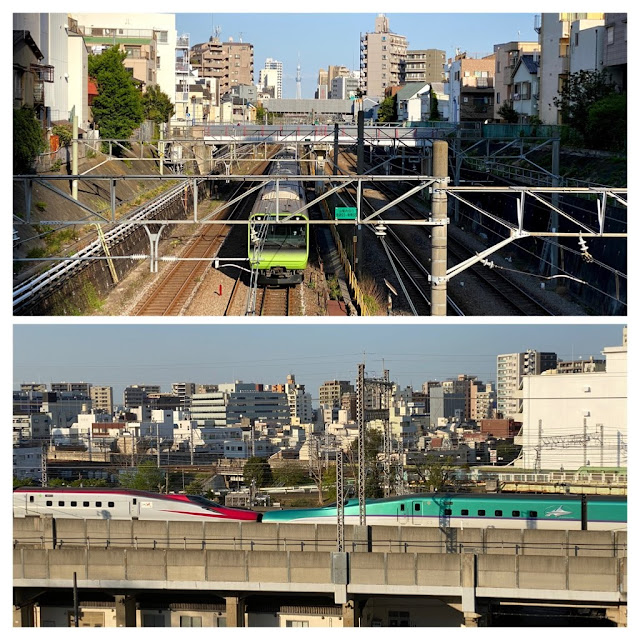 I was lucky that the ride was along Yamanote line, because my stupid Garmin decided at Meiji shrine that it didn't want to work properly anymore. It was impossible to reactivate the touch screen. Only that I hadn't even deactivated it. It only resumed to normal working order in Yanaka, probably around 20 km later after a stop at a toilet. But with the Yamanote line there to follow and google maps I made go without it.

Riding through the city was definitely not a normal Saturday, when the streets in Akihabara and Kanda would be full of shoppers. 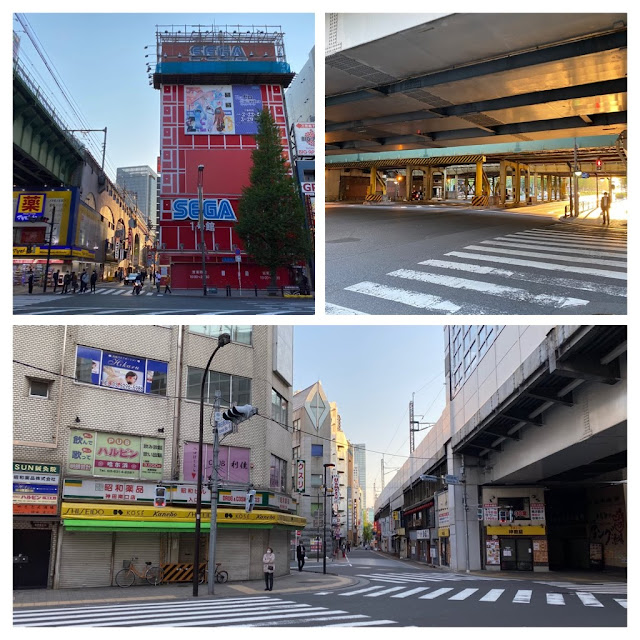 It felt a little bit like a late night ride, after most of the shops had closed... only that it was in the afternoon.

When coming through Ueno, there is a market street that normally is too busy to even contemplate to cycle through, but today it was possible. Along the side several makeshift stalls offered paper masks at roughly 70 - 80 yen per mask (in packs of 50). So a little bit cheaper than in Shinagawa. But I had bought two reusable and hand made masks back in Shibuya in a small artisanal shop.
No one had yet time to replace the "Tokyo 2020" signs, so there is publicity around the city (and also at Narita airport) for the "Tokyo 2020" Olympics... 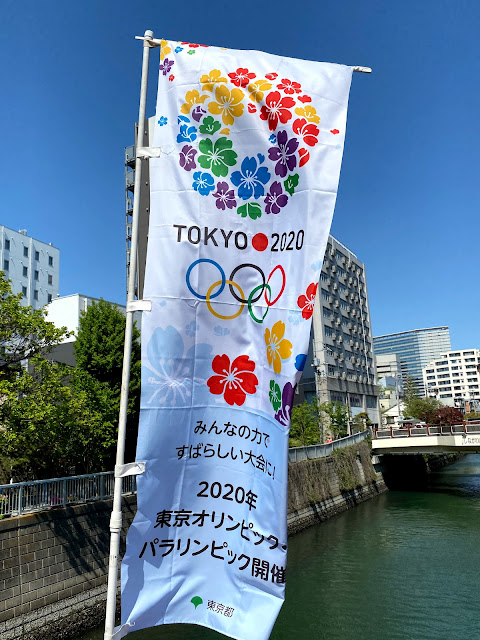 But at Tokyo station, the clock has already been turned to next year for the countdown: 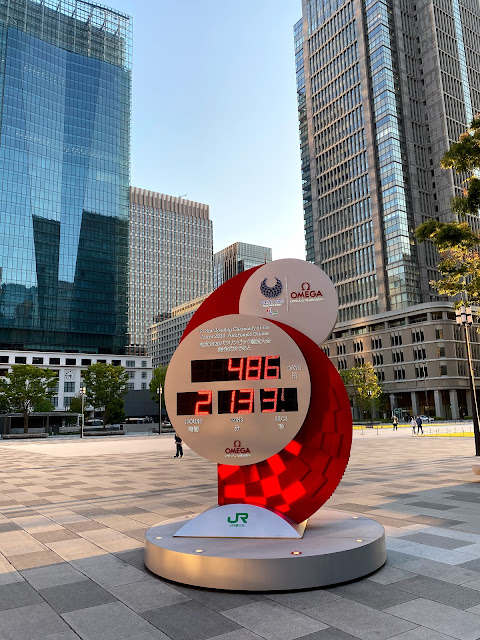 When I passed through here in mid February, actually on my first ride back in Japan, it was only 5 months to the Olympics... Covid-19 happened and now supposedly it is exactly 454 days until the opening ceremony (the picture above is for the Paralympics). But we will see. Obviously all politicians say, that it will not be postponed again... We will see ...

The last stop on my ride today was around Tokyo station, right in time for the sunset, which I used for some special pictures. E.g. how to make even small brompton wheels look reaaaaaalllly big! 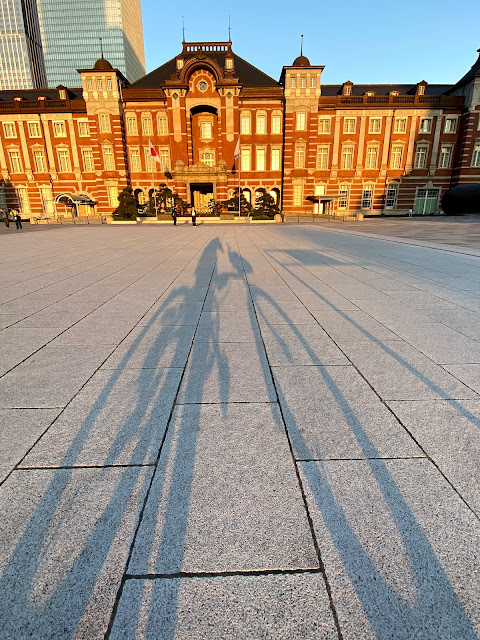 Sunset right opposite of Tokyo station ... 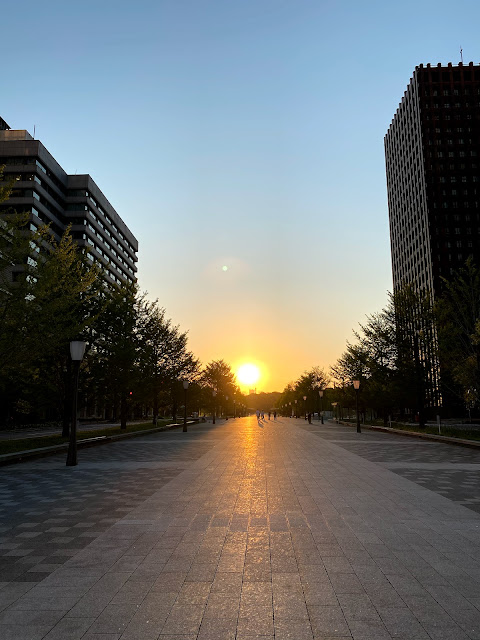 ... and by extension, just above the palace: 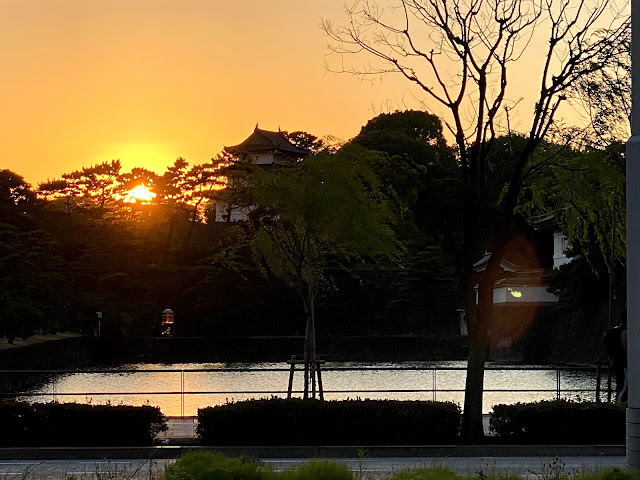 While the street in front of the palace was nearly void of traffic.