Before the ride with the NPC friends in the evening I started the day already on the bicycle, just to get out there, moving and get over the jet lag. Which is always a great idea.

A few months ago I already did a ride to several of the Olympic sites, but back then the weather didn't seem good enough to do the walk over the Rainbow bridge from Odaiba back to Tokyo, so I decided today to do that in the morning. And also to see a bit more of Odaiba, which however continues to not impress me positively. But I also continue to think that for the Olympics this is a great place. Actually very close to the centre of Tokyo, but vast space available.
Now also a long Olympic boulevard exists, which connects several of the Olympic sites, but well, without the masses of Olympia is a bit empty. As Odaiba generally is. 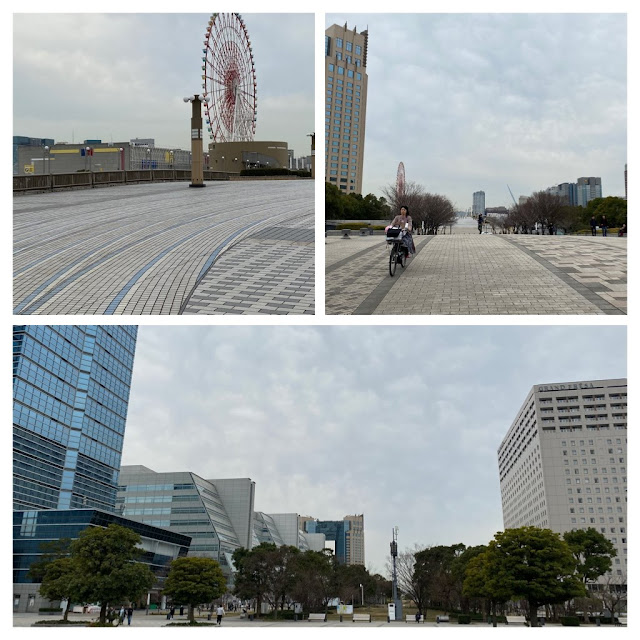 At the end of the boulevard it is guarded by Gundam... he puts the bicycle into proportion! 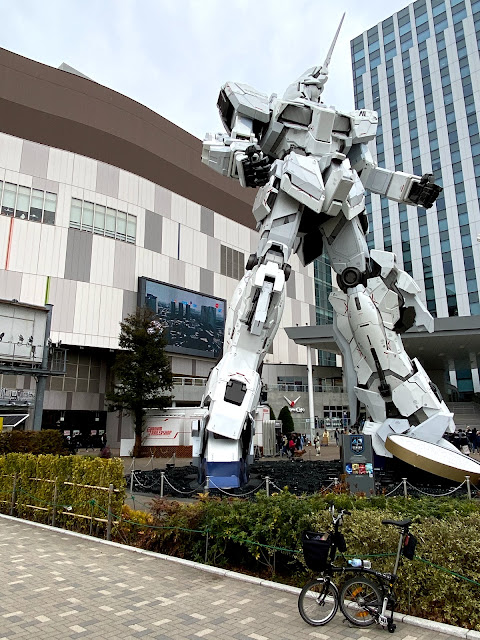 At that point it was around 12:30, and as I knew from my previous ride around Odaiba it can be quite difficult to find a place to eat, I decided to visit an other tourist spot, Venus Fort. I have no idea why people would go there for shopping, but it was surprisingly attractive for foreigners. And well, I have to admit that it is a curious place: 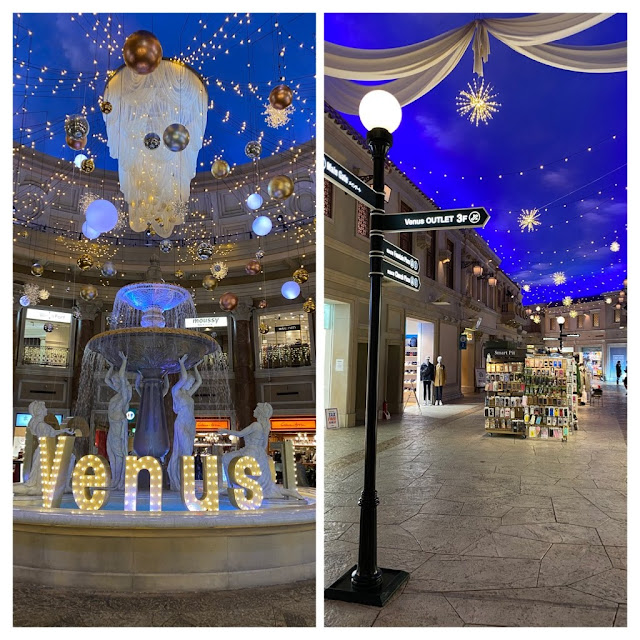 Indoor shopping centre in the style of an Italian (?) city.

I had (a not very tasty) lunch there and then continued to one more Olympia spot, the rings in front of the Rainbow bridge... 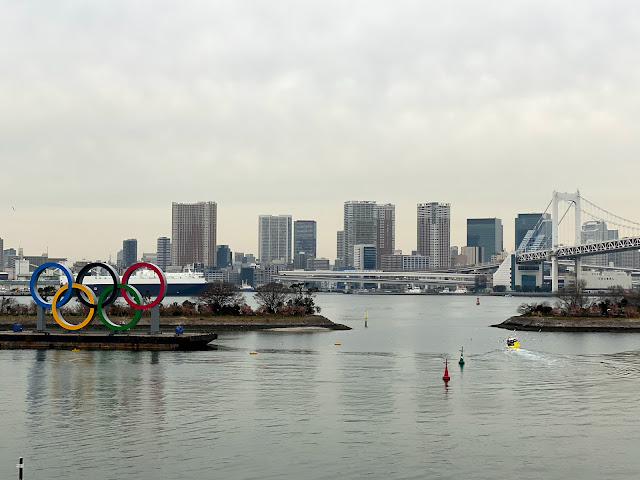 ... before finally approaching the bridge. Rainbow bridge allows only pedestrians, but bicycles can be brought along... but only with a strap-on chastity belt (see back wheel): 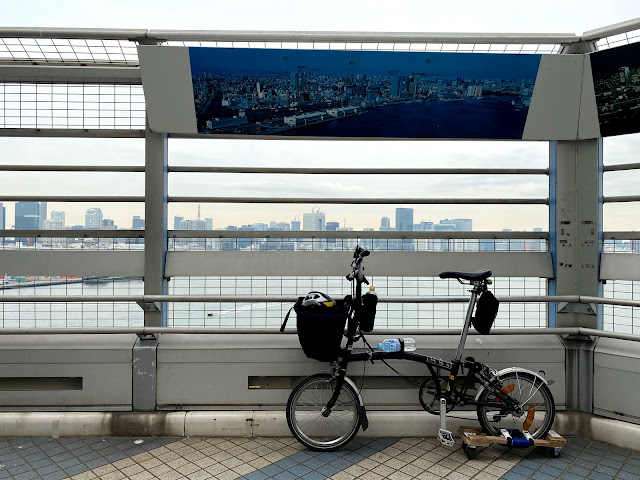 One has a few nice sights from the bridge, but it is also true that mainly it is a bridge with a lot of traffic and one walks alongside that traffic in a cage: 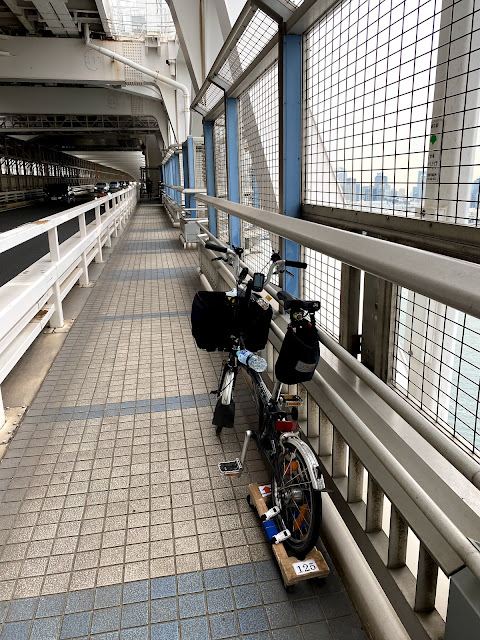 But here the nice sights... Unfortunately although the weather was nice and warm, the sky was overcast, so not ideal for photos. 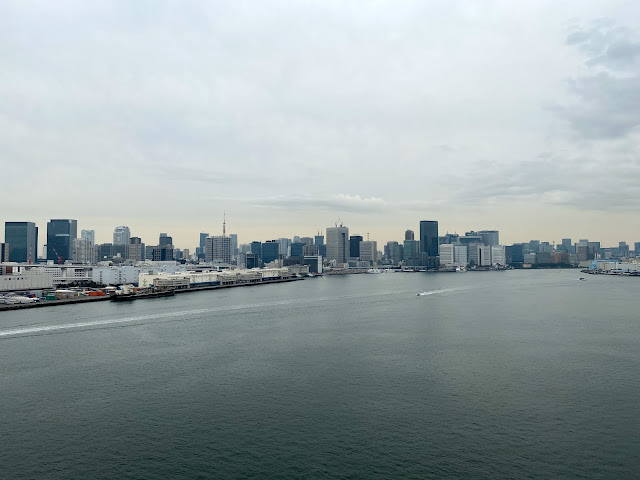 It was still quite early when I came down from the bridge so I decided to do something else in Shibuya before the evening ride with the NPC. In this article on Japan-guide I had found some interesting things to do in Shibuya, and I went to the Yamatane museum. Which had a quite interesting nihonga exhibition about "beautiful women". Many of the paintings were actually by women and not as old as one might think, but often in old style. One could see quite clearly how the Western art was influenced at the beginning of the 20th century by Japanese art, but also vice-versa. What was also surprising that there were a few visitors in kimono and even some men with kimono. Japanese really dress for the occasion!

The exhibition itself was small enough, that I had even time for a very Japanese sweet in the museum cafe afterwards and arrived just in time for the NPC meeting. BTW, the hot drink, which wasn't a tea, was definitely curious. Slightly salty and with an orchid flower floating gently in it. Wont be my favourite drink, but definitely a worthwhile start into 2 months of Japanese cuisine. 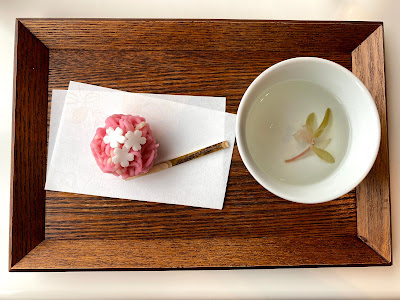