For this 3 day weekend, after considering several options, it seemed that starting in Saitama prefecture was the best bet weather wise... and so far so good. The weather forecast had rain in Chiba and Nagano prefecture for today, but not in Saitama. So that finally swinged it against Boso Flower Line and against a ride down from Karuizawa through Bessho Onsen to Nagano.

What I didn't realize when planning this trip on Wednesday this week, that I would be riding through 4 prefectures, in 3 days. Today I touched already 3 of them: Saitama, Gunma and Tochigi (and I even started in a fourth: Tokyo... but did ride only a few km to Shinbashi station, where I took a commuter train out to Omiya. A city which I had never considered for tourism, but while probably the city itself isn't interesting at all, the Omiya Bonsai Art Museum is a true treasure.

For me, this tree here below alone, made the visit worthwhile. It really moved me. I cannot explain it, but the beauty of this tree arrived straight to my heart. A very peculiar emotion. The terraces (I am sure there is a much better word for it) in which this tree is shaped, the small gap to see the trunk, the overall harmonious form... a true beauty. And still very young, only 70 years! 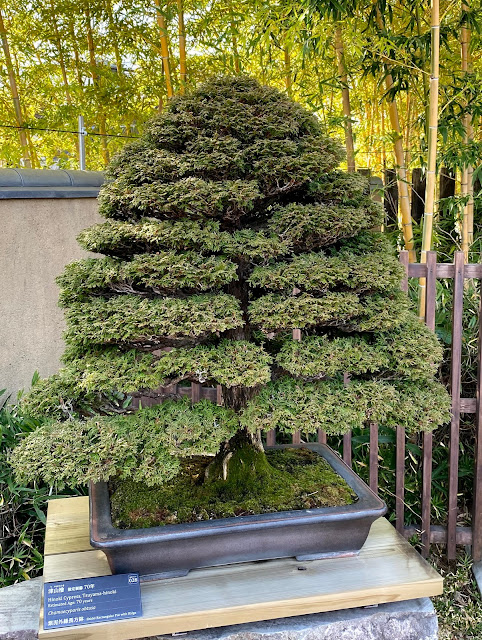 Before I made it to the Museum though I paid a visit to the Big Shrine = 大宮 which gives Omiya its name. The shrine was nice enough, but really not different to a lot of other shrines I have visited across Japan. What was remarkable though was the amount of people close to the shrine and in the park around it that were playing Pokemon Go. Players of nearly all ages, probably with the exception of teenagers. But even the elderly where avidly playing and there were hives of people standing around in the park trying to catch a pokemon. I did not join. 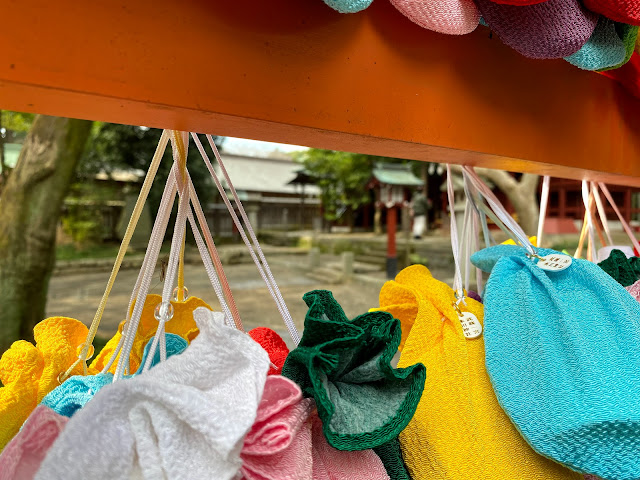 When I continued I noticed that the lowest gear didn't click in. Not so much of a problem for these 3 days... but will be quite a problem next weekend (Izu peninsula!), so I decided to search out a bicycle shop to get it repaired right away. It isn't the first time this happens (actually I think the 3rd, and on both bromptons). This time it happened after earlier this week I had my back tyre changed, because of a drastic loss of profile at a brompton dealer very close to my office.
I found a bicycle shop in a big shopping arcade, and for 770 yen got it fixed in less than 30 minutes. Although to say the truth, in both Tokyo and Leiden I had got the same problem fixed in a brompton selling store in a few minutes for free... but well, fixed is fixed.

Then I made my way to the highlight of the day, the Bonsai Museum. There was currently an exhibition of a bonsai master. This exhibition both contained actual bonsais (inside the museum) as well as very detailed explanations about the different Bonsai techniques. Including all the information in English. All of the trees were utterly remarkable. Very varied. Some were entire landscapes out of one tree. (But no photos were allowed inside). Actually bonsais are meant to be a part of a Japanese room, and there were also 3 rooms where one could admire the entire room setting around the bonsai.

In the garden there were more Bonsais, including the beauty above, but also some cherry trees already in full bloom: 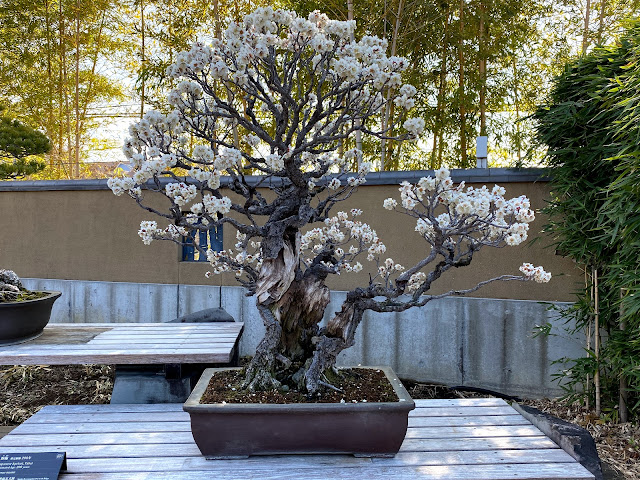 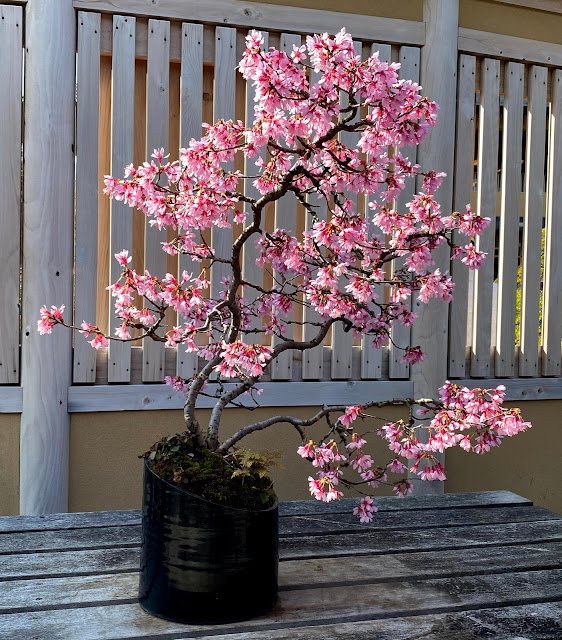 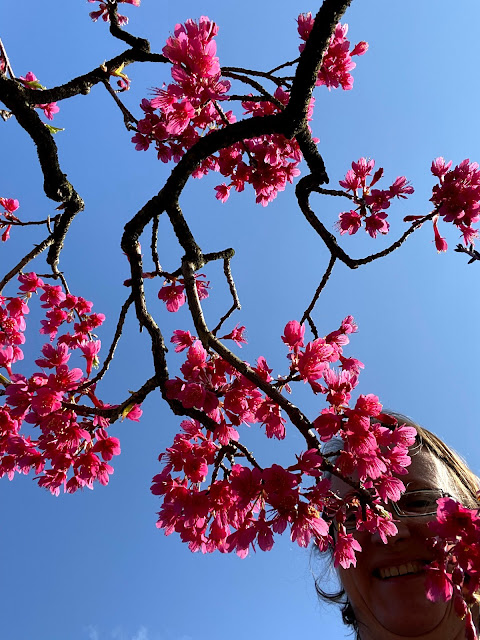 and several pine trees. The oldest was over 1,000 years old! Must have been handed down from one bonsai master to the next, I guess. 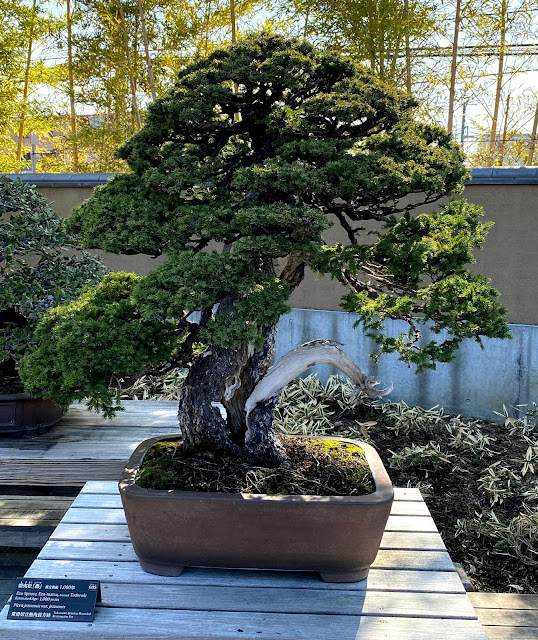 In the big garden of the museum photos were not allowed, but a video from a slightly elevated point was:

After the museum it was already past 14:00 so I ate in a small restaurant right in front of the museum. At that point I had only made about 6 km of today's ride... So I decided to skip all the other bonsai gardens (of the bonsai masters) that are close by and start the ride in serious.

First I was riding along the train lines, which seemed to be particular popular with the local trainspotters. Not sure if some special train was going to come through? Or if this is simply for any weekend day with decent weather. 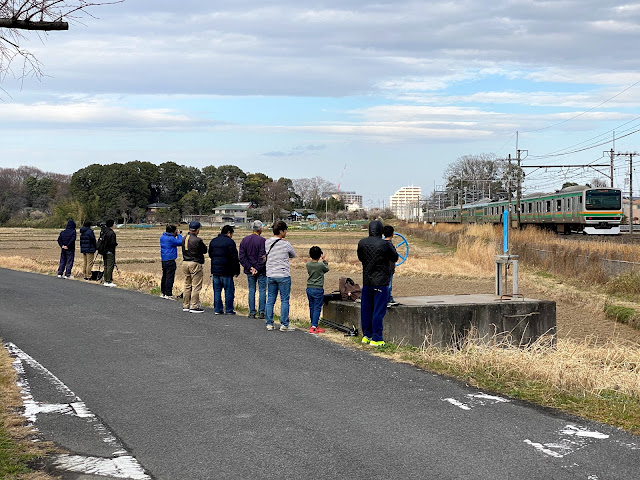 Thanks to komoot I had for over 30 km a quite perfect bicycle route along a small river. 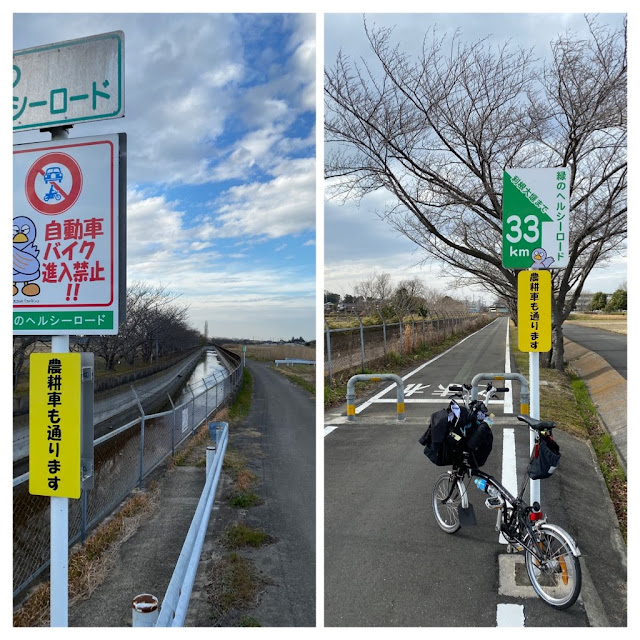 This cycling lane is part of a bigger cycling infrastructure in the valley, as one can see from this map: 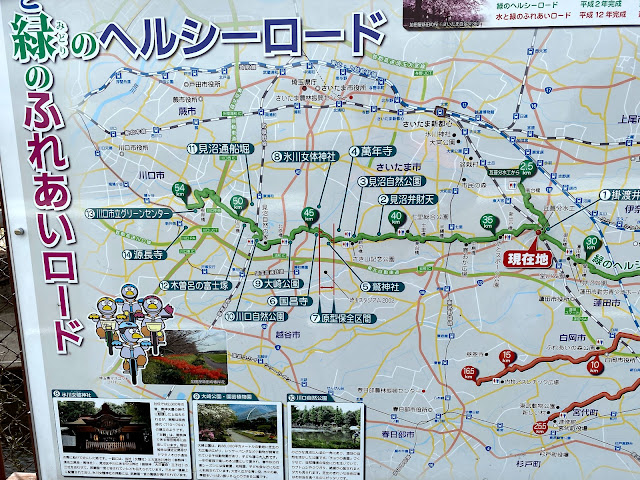 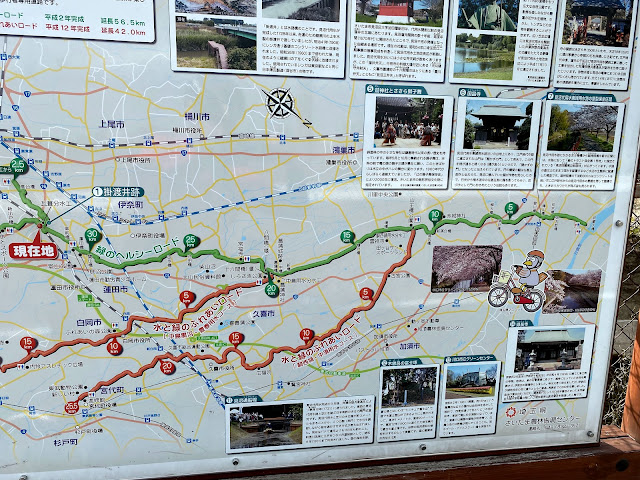 When I crossed the Tone river, we were already close to sunset... unfortunately in Japan it gets dark early... and I am not an early bird... so the last kilometers into Ashikaga were in the dark... but not too bad, I have light, the streets didn't have that much traffic... and an onsen awaited me quite close to the hotel. 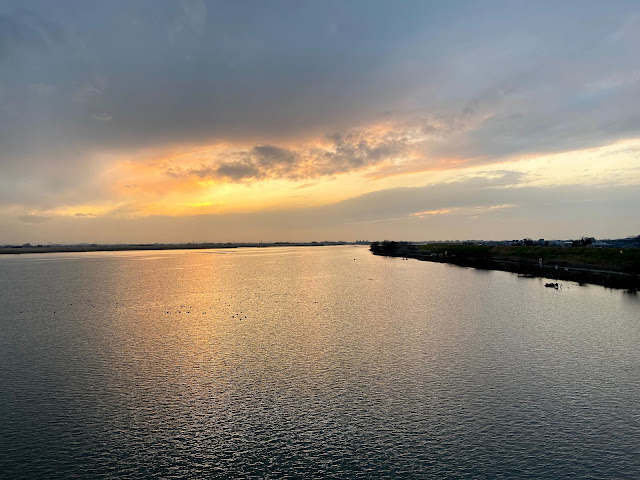 Actually a very nice onsen, with 4 tubs inside, plus a pool and a collagen room, which had red light, and NOT a collagen bath. Not really sure how this is supposed to work or what it is supposed to do... but well. Plus 4 tubs outside!

Plus there weren't really a lot of people either. And they had all kind of amenities (scrubbing towel, tooth brush...) free of charge. So definitely a great place where to finish the ride today... well... finished, finished I did in my hotel close to Ashikaga station, but that was only an other 2 km down the road.