Yesterday night the probably last ride with the friends from Night Pedal Cruising. In August we do a night long ride starting at midnight. Also this time we gathered in front of the NHK building at Yoyogi and then shortly after midnight took off on a ride along Yamanote line.

At this point I was very tired, it had become daylight already and it was shortly before 6 am. So I decided to "call it a night" here and leave the others to complete the ride until Shibuya and Harajuku.

We took a last farewell picture and then I rode down to Meguro river and along it back home, where I arrive probably around 6:30, very tired (and with pains in my butt and hands... forgot my gloves...) 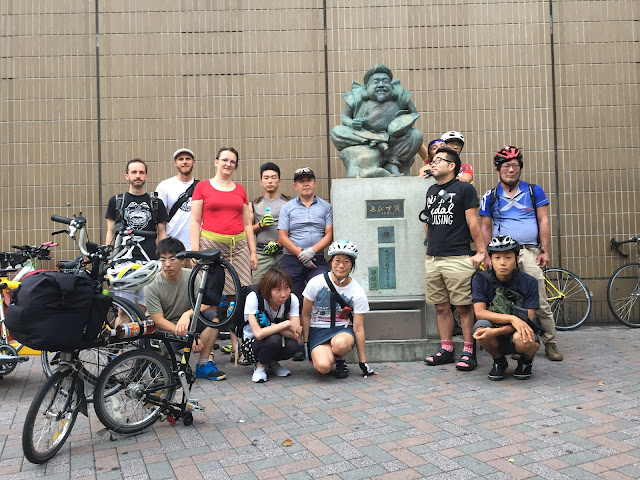 I also took this ride as a test ride for my travel. So i went with my fully packed bag. This makes the bicycle heavy and more tiring to ride than normally... but doable. I also found what looks like a good place for the spare tire. Simply attached below the saddle. Surprisingly it does not interfer with the riding and it even serves as a backwards reflector, as the white stripe on the tire is reflective.

For further reflection I also added some reflection stripes to my helmet.

And here the map of the ride along Yamanote line: