Today the weather was a bit uncertain so I put off the ride to Kinkakuji in Kyoto to tomorrow and instead decided last minute this morning to ride out along two rivers towards the North of Osaka. I found on google maps one potentially interesting goal, Nakayamadera and then added an other one, the Takarazuka theater, plus I knew that at least along one river there would be a cycling road and strongly suspected (but actually was wrong) that there would be one alongside the second river as well.

I had my typical late start and started along the Naniwa river, a cycling path I have used several times before, among them in an aborted attempt to get to Minoh park a few weeks ago (which ended in rain and an onsen).

Today did see a little bit of rain, but no onsen. With the state of emergency extended nationwide on Thursday this week, it seems that the local governments have urged more companies to close... and from all I can tell, the onsen and super-sentos have all accepted this guidance. So probably the ride I did earlier this week was my last onsen for this trip to Japan. I hope not the last onsen for this year, as I hope to be able to come back to Japan later in the year... but who knows. 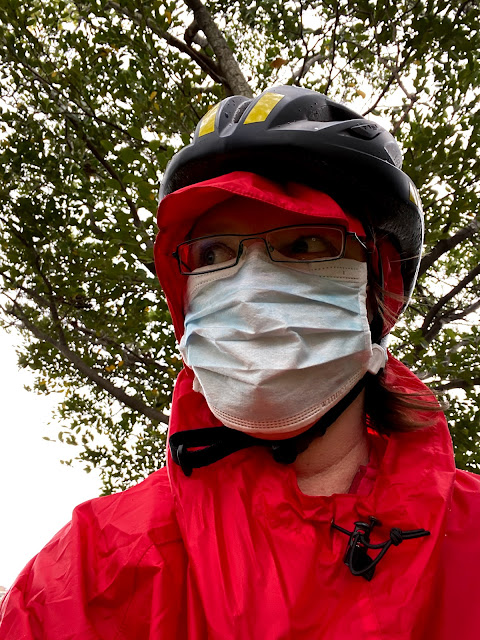 Well, it did rain... for a little bit I did hide under a bridge, then it seemed to become less, so I restarted... but so did the rain. So I donned my lovely rain coat and just for effect also the face mask and took a picture. But by the time I had finished putting all the gear on me and take the selfie the rain had nearly stopped. So literally after another 500 m I got out of my raincoat again. The mask I did wear in the more urban parts of the ride, where pedestrians were around and could not be avoided by many meters. But for most of the ride I didn't wear it.

The ride along the rivers up to Itami and Takarazuka isn't definitely one of the most scenic ones, but at least the cycling lane has less hurdles than the one along Yodogawa river. 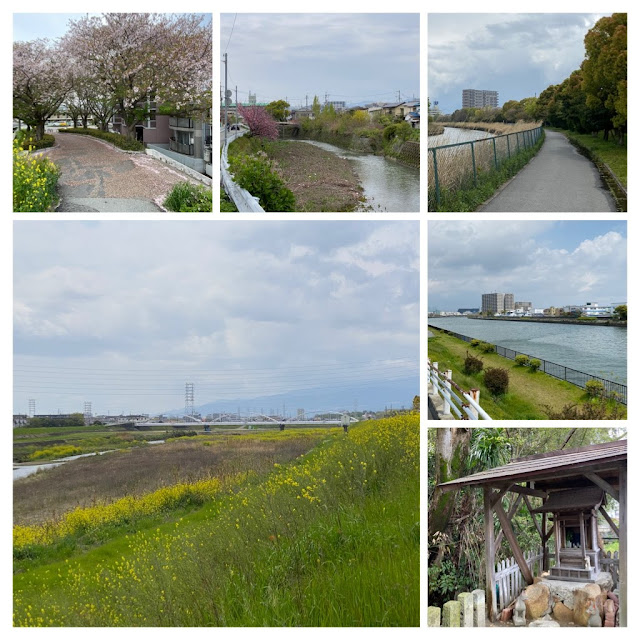 Already quite close to the temple of the day, I came by this really strange, European style garden shop with park. And it wasn't the only garden center around. I didn't buy any tree or other plant... but did use their facilities... before making the final km to the temple. 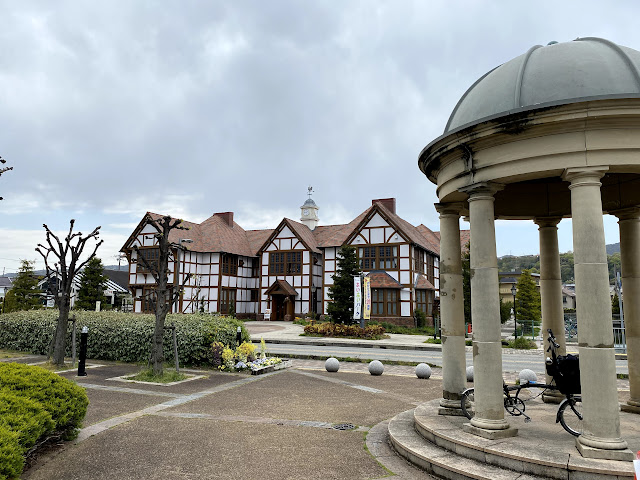 Shortly after I also came by this shrine and took a quick picture. I had been once before in the area of Nakayamadera, but without making it to the temple. Actually without even knowing about it. Instead I went to a very nice onsen there, after a brilliant ride through the more far flung countryside... which however would require me to use a train to get there... so for the time being that is off.

So Nakayamadera was a nice surprise. In normal times it must be a rather busy temple seeing that it had it's own shopping road leading up to it. But today half of the shops were completely closed and the other half (the restaurants) were open but had no patrons (it was however already a bit late). So even if Japan is very far from a complete lock-down - restaurants are open for lunch but not dinner - number of customers is definitely way down. 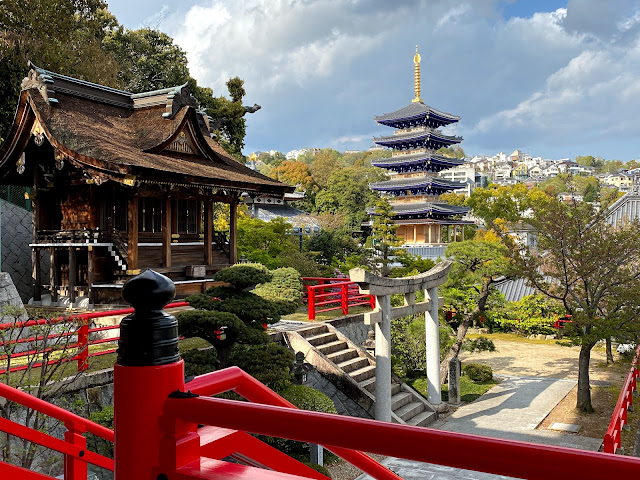 The temple must be relatively old, but I would say that currently most of the buildings are quite new, including the stunning blue pagoda. 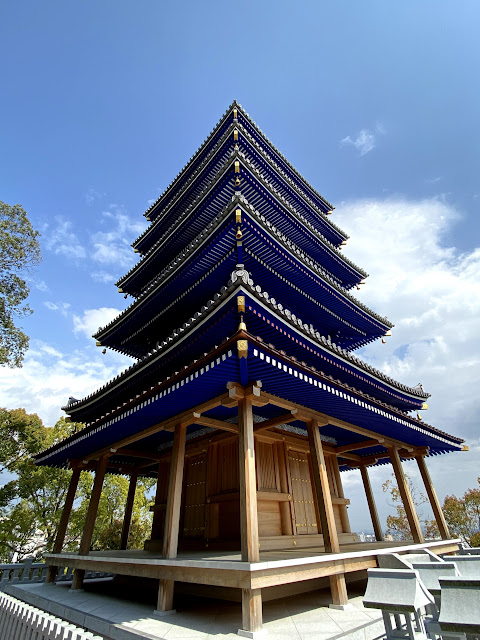 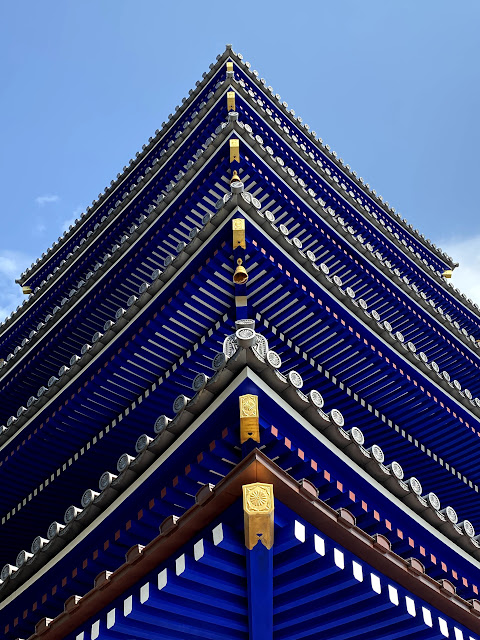 What I learned only now, while writing this post, is that it is part of a 33 temple pilgrimage tour of Kansai, of which also Kiyomizudera (where I was two weeks ago) and a few other temples here in the wider region, that I have visited before. But today, I would say there weren't any pilgrims. There were a few other visitors, but few.

Behind the temple, was a small flower garden with nice views... 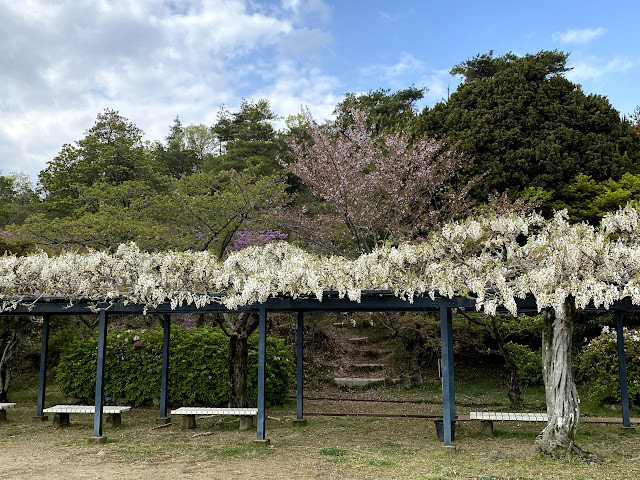 I had my simple lunch on a bench looking over towards Osaka, below a cherry tree way beyond peak and a stupra in the background. Perfect! 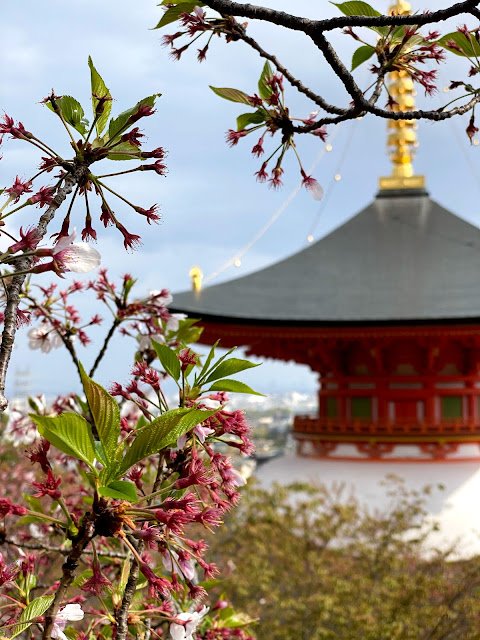 After this rest I continued towards Takarazuka, where I had my second goal of the day, the theater building of the Takarazuka Revue theater. 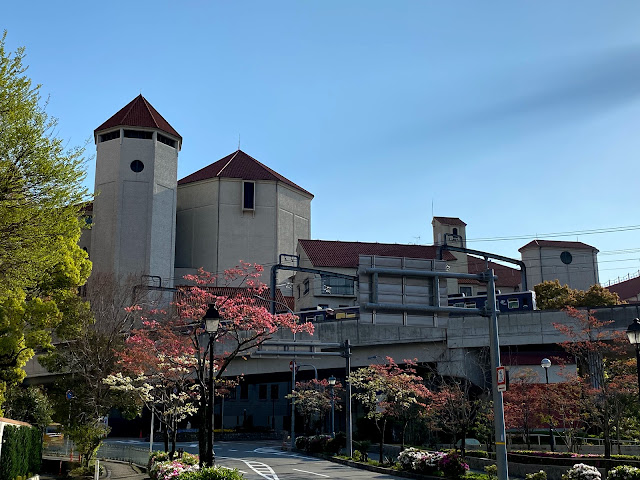 Well, a uniquely ugly building. But here captured with a train in front, which makes total sense, because this theater is part of a railway company. The story, according to Wikipedia is that the founder of the Hankyu railway company wanted more people to use his trains, so he was trying to find something interesting for one of the stops of his train line... and came up with the idea of a theater. Which worked great. The theater is now famous in all Japan... and has expanded to Tokyo, where however none of the Hankyu trains can reach it.

I had tickets for a performance a few years back, but for some reason I couldn't go. So maybe something to consider next time I am in Japan for a rainy weekend.

The ride back the second river was uneventful but fast, thanks to a good tailwind.

Back closer to Shin-Osaka, I decided to go on an exploratory trip of the Naniwa Cycling Train and did ride it all to the end in Dekishima, then turned and back all the way to Shin-Osaka. From Amagasaki to Dekishima this cycling path is the contrary of scenic... but useful I guess. Closer to Shin-Osaka it becomes a little bit more scenic, but is just a useful cycling path along the river away from traffic (but mixed with pedestrians and joggers).

For dinner I picked up some gyoza in a nice restaurant in Higashi-Mikuni where I often went... but now it is take out only and only until 20:00.