This post describes the first of two days in the Tono valley, which is a very bicycle friendly region in Iwate prefecture.


Well, looking at a 5 day weather forecast doesn't always give the right prognosis... The day started out fine, cool but with some sun and clouds, but quite rapidly the clouds got the better of it. And before lunch it started raining. Luckily I did not NEED to go anywhere today, just (!) sightseeing. Ultimately I did not get too wet, thanks to rain radar, lunch at the right moment and an ugly but very welcome roofed way up to a temple. And, well, some rain gear.

I was however unlucky enough to have chosen the only region of Japan with rain today: 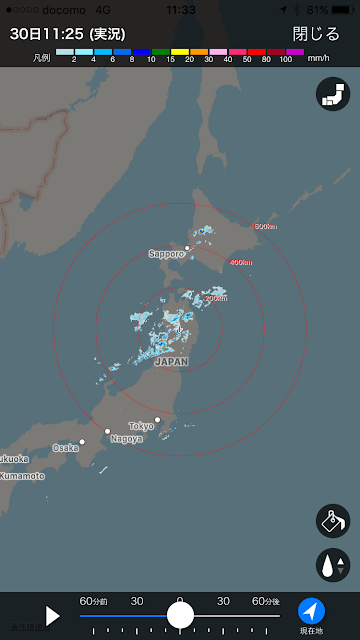 If you wonder what app I used: Tenki.jp

The day started with a solitary breakfast in the big room: 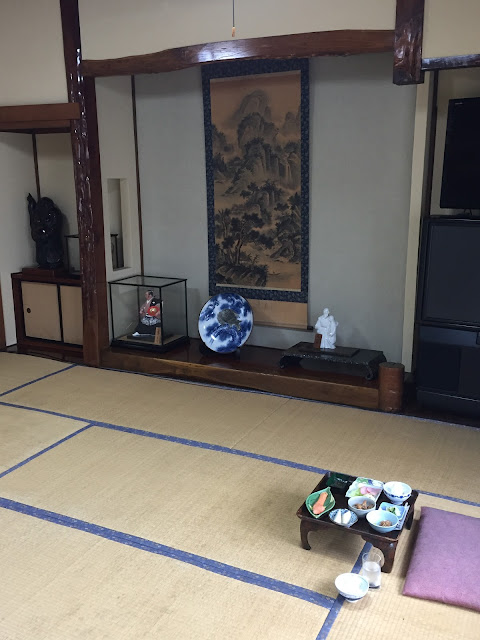 Then I left my ryokan, here still in the sunshine and headed to the Furosato village. 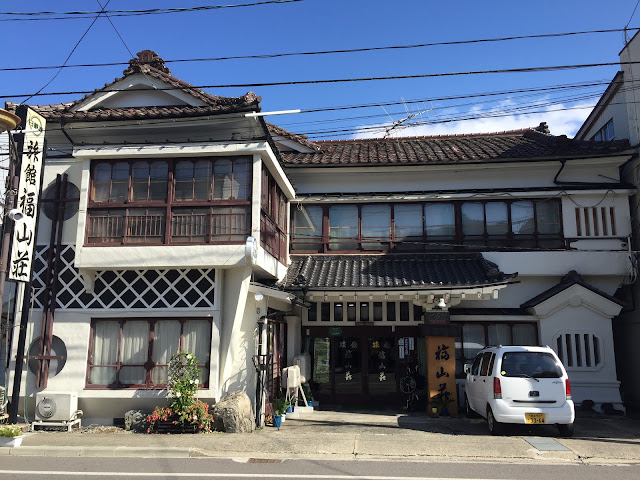 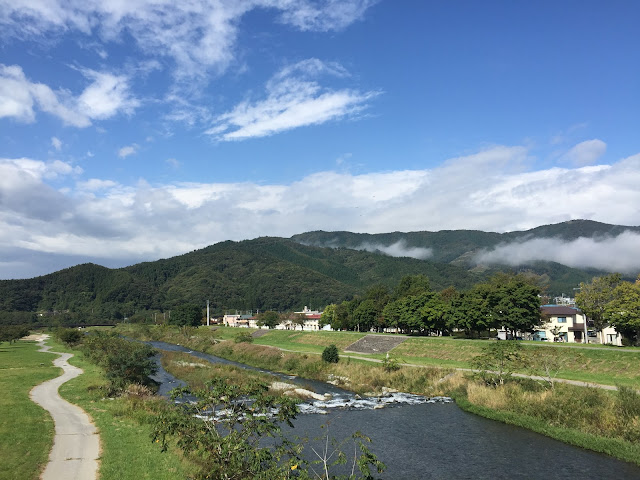 It is one of the typical Japanese cycling roads along a fortified river. Nothing terribly special. Actually as it is on the inner side of the river reinforcement, I did not have a great view over the plain of Tono. But there were still some kilometers to go, so some nice views were still available. And even the sun was - briefly - shining: 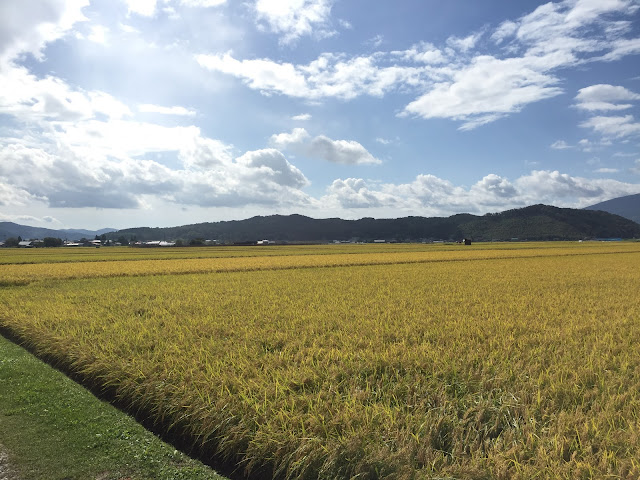 My first goal of the day was the Furosato village. This is an open air museum with traditional houses of the Tono valley transported there. Actually in the valley one can still see a good number of traditional houses, that are generally in better shape than in other regions in Japan, where often older houses are in desperate disrepair. Here I have seen both today as well as yesterday, in the ride up from Shin-Hanamaki station, a number of older houses that do not seem to fall apart immediately. Some are reasonably maintained. None are as well maintained as in the open air museum though... 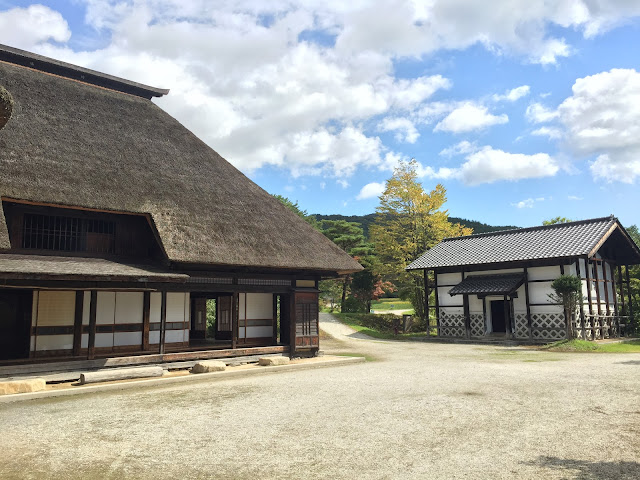 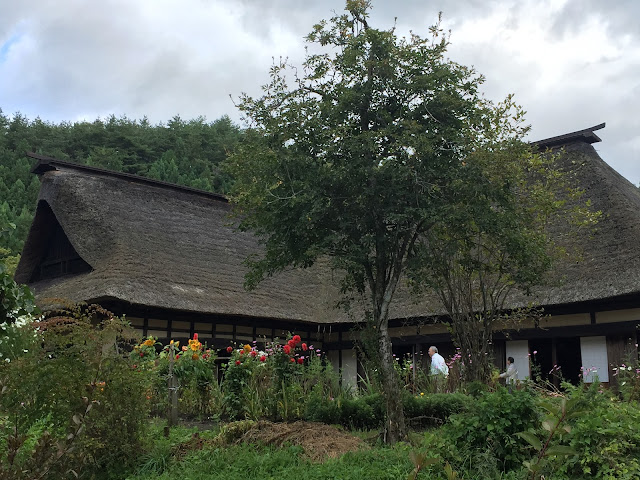 The typical house in this region is L-shaped and, importantly, has horses living in the same house: 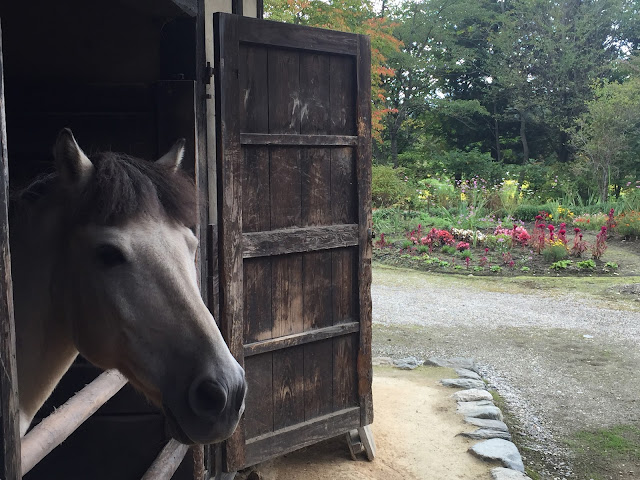 For fertility (supposedly of the rice paddies) horse and men statues were being prepared out of straw and left in the fields: 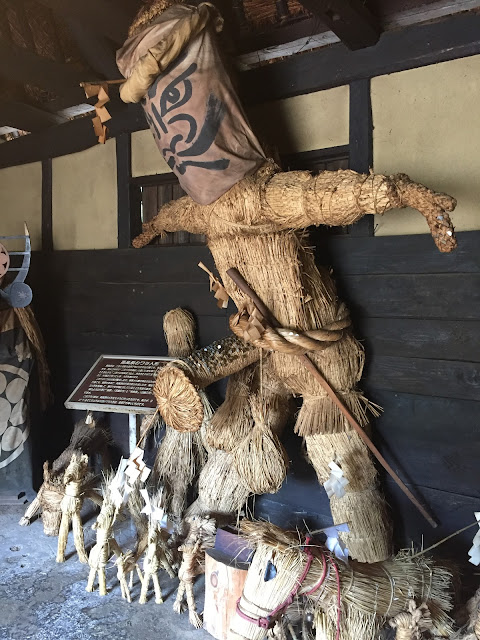 While I was walking through the museum the clouds got darker and darker and at a certain moment it even started to rain, very lightly. At this moment luckily I had already finished seeing all the houses that were there. There aren't actually too many, just the right amount. So I went back to the main building in the hope that the rain would stop soon... however on the contrary it started to rain more heavily. So I decided on an early (11:45) lunch with some hot soba-soup. Supposedly soba is the thing to eat here. Well, unless you eat Jingisukan, which I didn't (see below dinner though).

The soup gave me back some warmth and although it had stopped raining while I was eating, it also  had started again... So I changed into rain gear, the first time since nearly a year. I also have the strong impression that the rain cover that comes with the brompton T-bag is not going to fit over the full T-bag. It fitted today, as I took only a few of my luggage items with me on the round trip, but even with that it was hard. Will need to check that out... otherwise I need a new rain cover. Maybe just some kind of plastic sack could be fine...

So once clad in rain gear I retook to the street back down towards Tono with a stop at the Fukusenji temple. Right when I arrived there the mild rain started to evolve into a more fierce rain, but there was a temple umbrella and this very ugly looking, but in this case very useful, roofed way up the hill to the temple and pagoda all coming to my rescue. 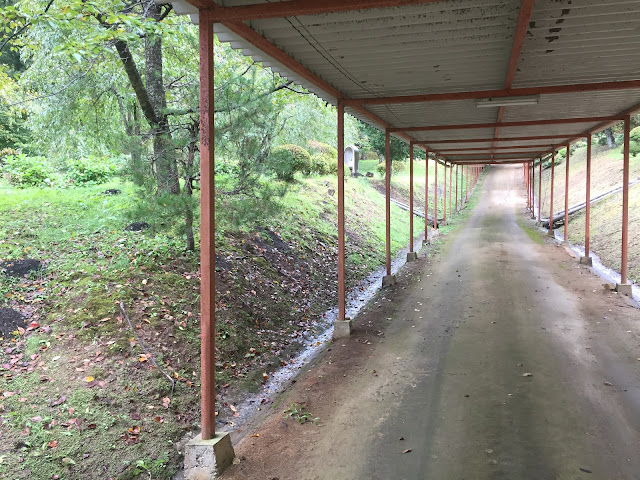 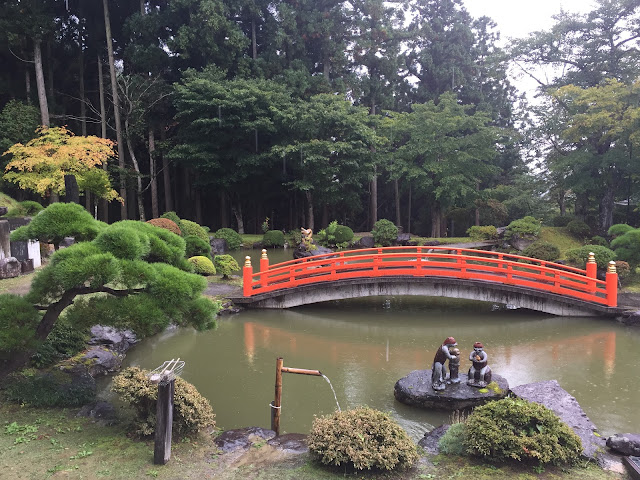 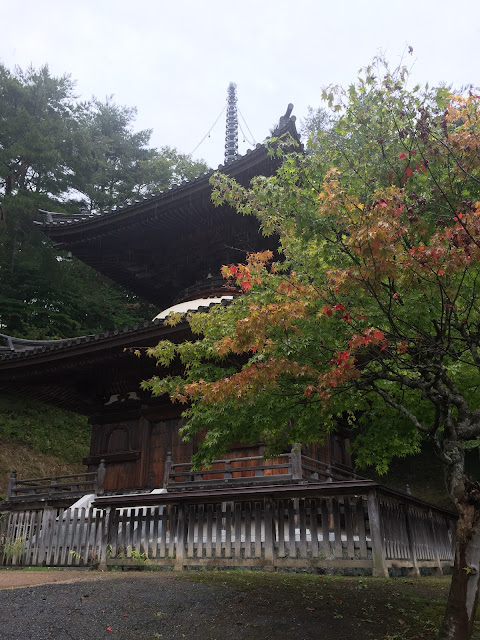 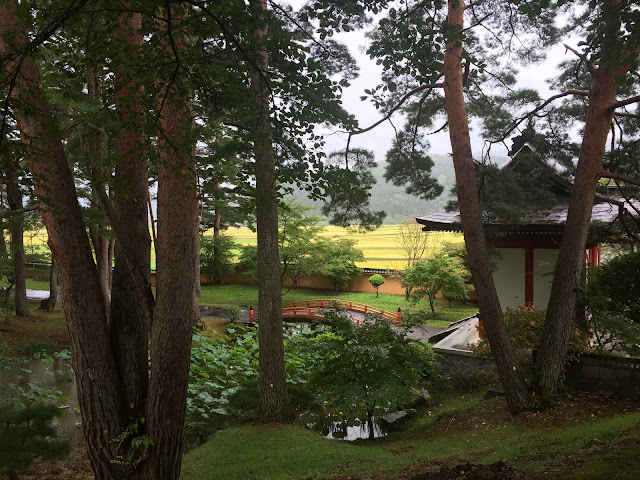 The main attraction is actually a 17 m high Kannon statue (or so the guide book claims), which I also went to see, but no photos allowed there.

I also waited out a bit the rain under the roof, so that when I came back from the hill the rain had gotten lighter and finally stopped. Just in time to allow a quick visit to the Kappa pond.

Kappa are strange (mythological) creatures in Japan. On one hand side they like to eat small children, but on the other hand side, children are fishing for them. They are actually quite loved in Japan, both Kappa (and children). It seems that in Tono valley there is a rich tradition of story telling, involving among others Kappa's. Actually there is even a "story telling" museum in Tono city, but only in Japanese, so I skipped that one. With all those Kappa stories, there is obviously a place where they live and where you can try to catch one. Apparently apart from small children, they also like peppers and cucumber: 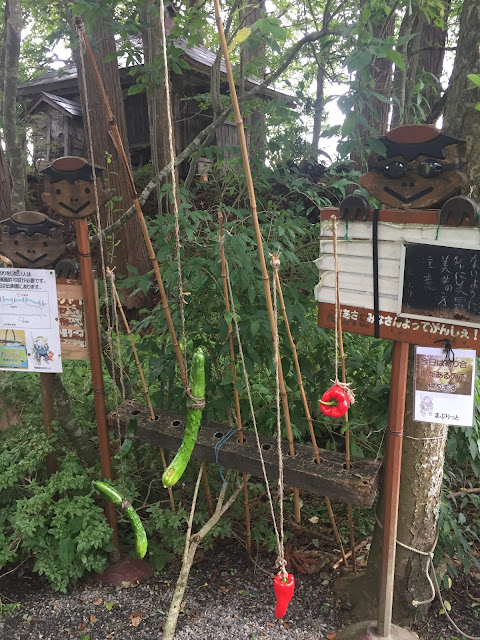 Which are used in the attempt to fish for them. I was lucky enough that when I came to the Kappa pond there were some families around, trying to fish for them. I think without that the pond would have looked just like any other small pond in a river. 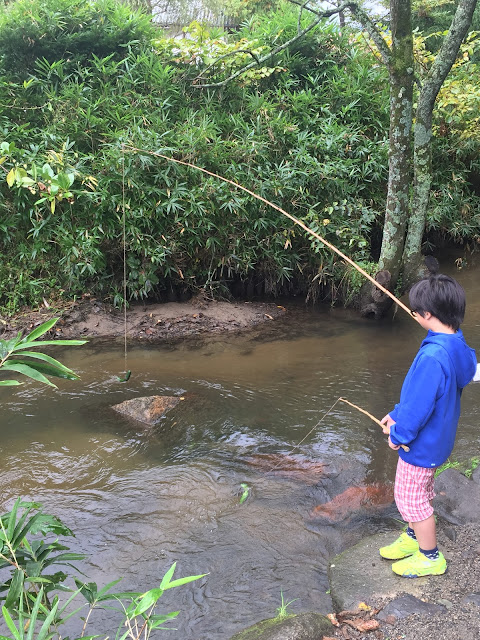 The only kappa in sight: 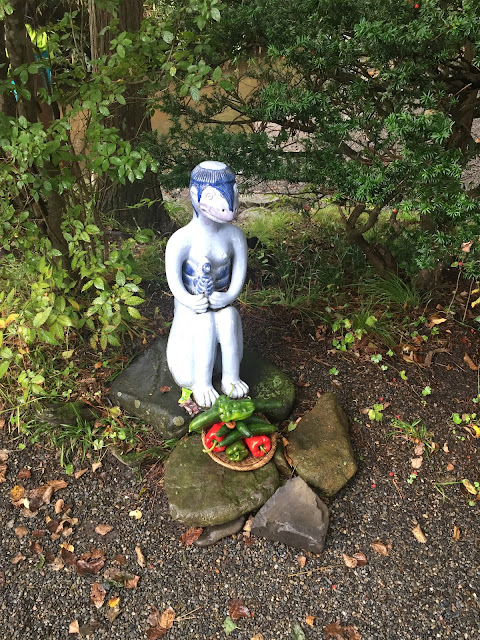 The rain radar (see above) also ultimately helped me to arrive back to my ryokan just minutes prior to the next rain. But still with the time to get my tires filled up with air in a local bicycle shop and take these two pictures of old buildings remaining in central Tono... alongside their not so old / nice neighbouring buildings. 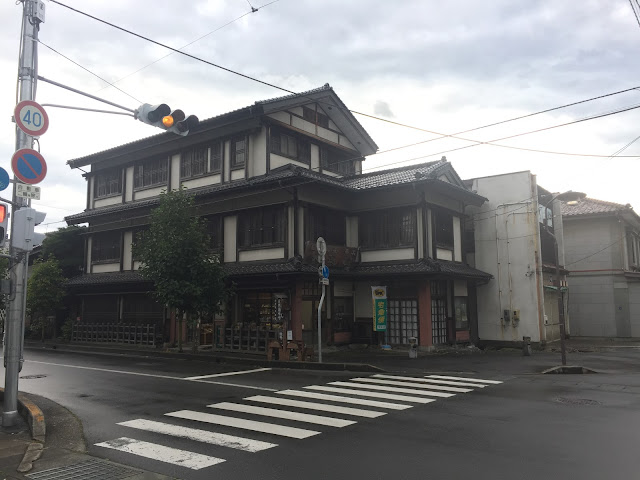 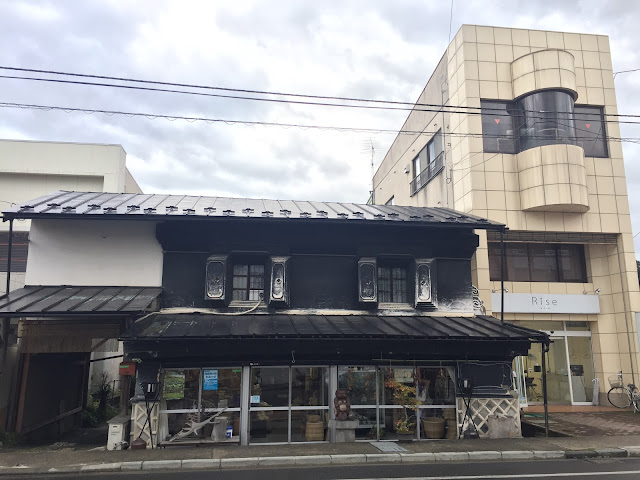 I was back at the ryokan only minutes before heavy rain came pouring down. But at that moment I was already in my room, putting in order today's gear and getting ready for my afternoon bath.

Speaking (see above) about jingisukan... there was it for dinner: 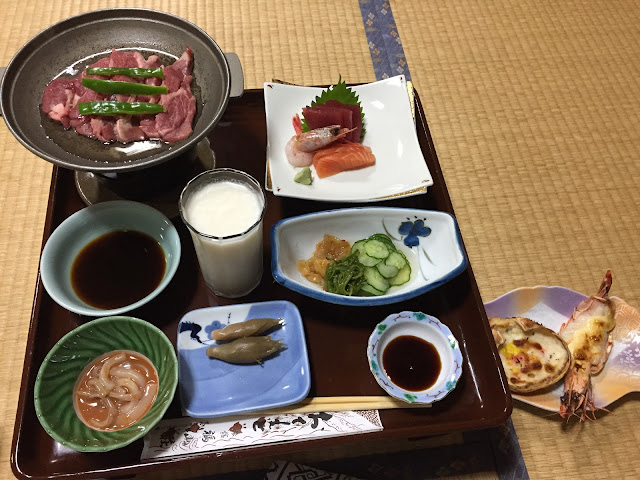 It's the meat plate (yet to be cooked) in the upper left corner. It however only served to confirm that I don't like lamb. The taste is not for me.
The white drink in the middle is not milk but rather a local variation of sake, Doboruko (or Dobekko in local dialect). It's actually quite tasty and full of rice corns.

Tono is also famous as a hop growing place. I saw some hop poles during the day, but the hop has already been harvested. And presumably made into the local variation of Kirin beer.

Of the sightseeing spots I had planned for today, there are two where I didn't go, because of the rain:
The weather tomorrow however seems to be absolutely perfect, no rain, no clouds. So I need to think about the plan for tomorrow. Maybe some more exploring in Tono valley and then on with the train to Hiraizumi, where I have my next accommodation.