This post describes the second day of my bicycle tour of Japan, starting on the West of Wakkanai (Hokkaido) and riding down the coast.

On my second day I continued down the coast from Wakkanai in direction Teshio, with a free sight on the local Fuji (Rishiri Island) the entire day. I started shortly after 9:00 and arrived way to early to my minshuku of the night (shortly before 14:00), so that I was not yet admitted. Which however resulted in a nice visit to a close by nature reserve.

The landscape in general is quite rough, nordic: 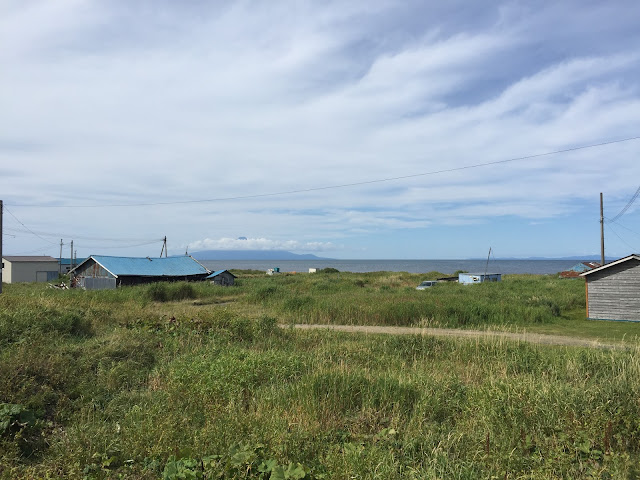 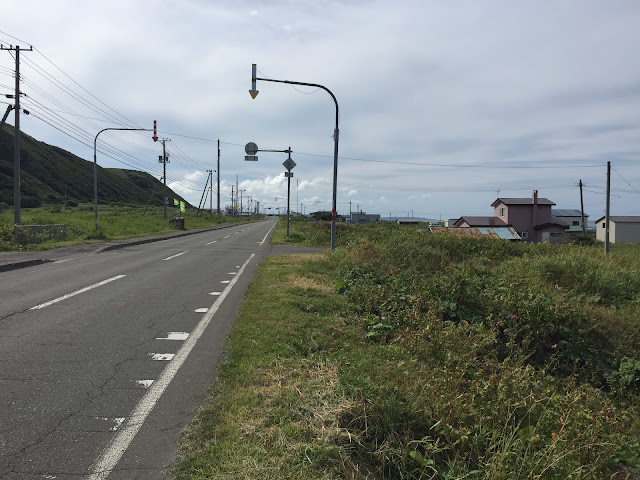 The first few km were on a road called "return without trouble" 無事カエル however カエル in Japanese can mean both "frog" as well as "to return home", which explains the frogs (and other characters) made from old buoys. 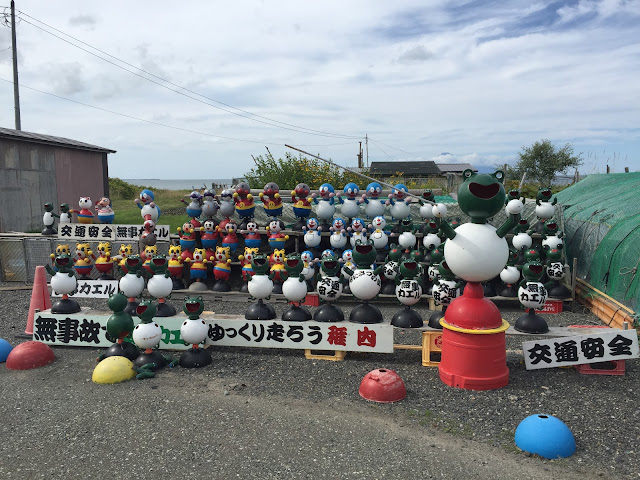 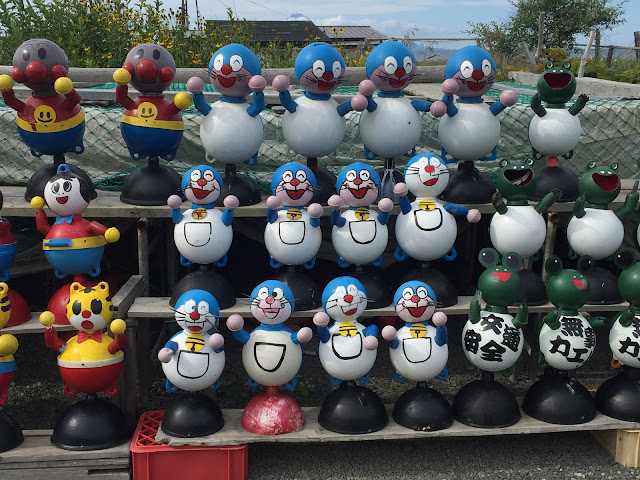 Further down the coast some dunes appeared: 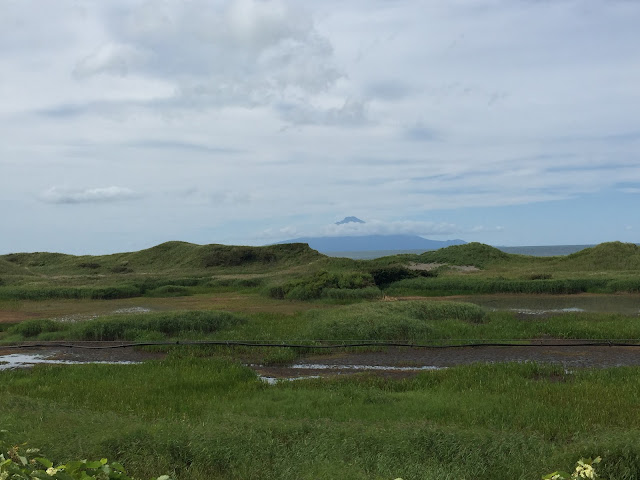 In Batsukai was this small shrine right in the equally small harbour: 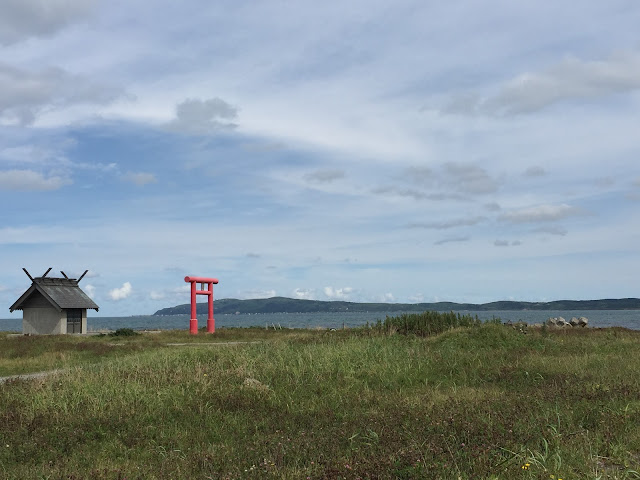 Leaving Batsukai there was this small sea rose garden. Both with real flowers and rather gigantic steel flowers: 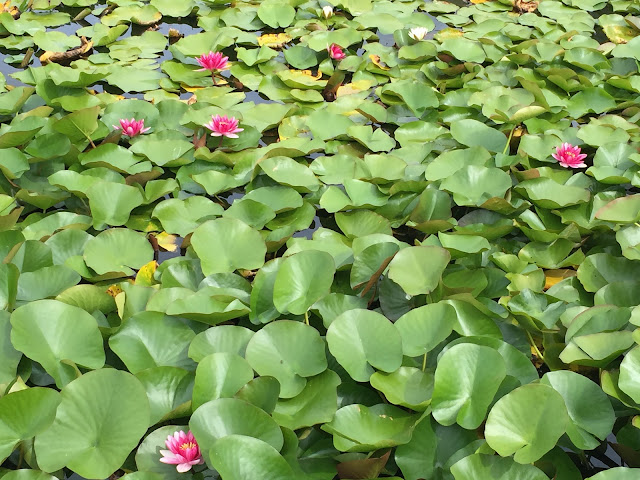 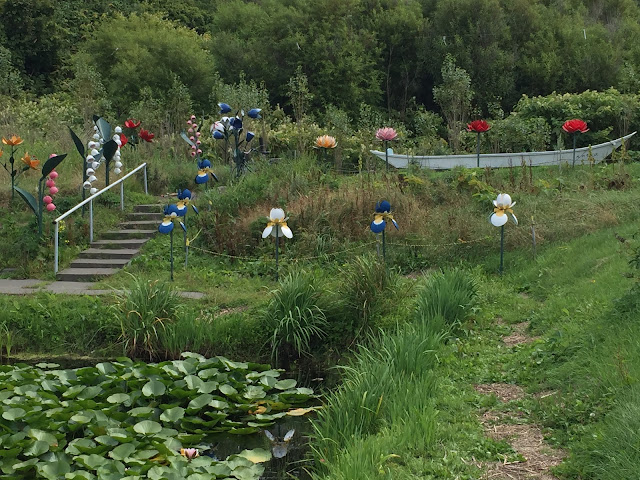 On my way today, I met a few other cyclists (maybe about 10), all of them going in the opposite direction and a lot of motorbike riders. Generally in groups of 2 or alone. However there was also one group of maybe 10 Chinese motorbike riders. Both bicycle and bike riders greet each other here. In general it seems that this road along the coast is much beloved by "riders", either of bicycles or bikes. I even met one person walking along the road, and I met him again today at dinner. He is on his way to surround all Japan by foot, along the coast. He is doing it over several years and this year Wakkanai to Chistose is on his plan. Strangely enough, I did not encounter any other cyclist going in MY direction. Is that only because of lower probability because of sharing the same direction, or are there really less cyclists going from North to South??? At least the other cyclists I met tonight at dinner, he is also doing it in the South to North direction.

As suspected, there was very little to eat along the road today. But I had come prepared, so I had an entire Hokkaido camembert, some salty cookies and some nuts on the seaside, obviously overlooking Rishiri Island: As I had started early... well at 9:00 and my cycling day was not too long, I arrived at my Minshuku of the night very early. I was a bit tired at that point and thought to just remain in the garden for an hour, but even that was not permitted. 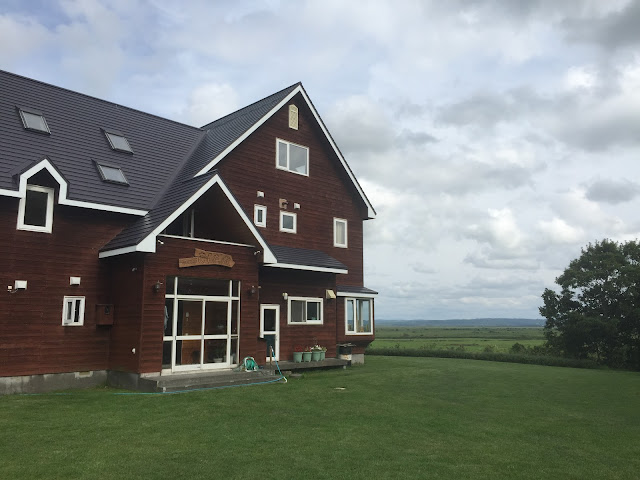 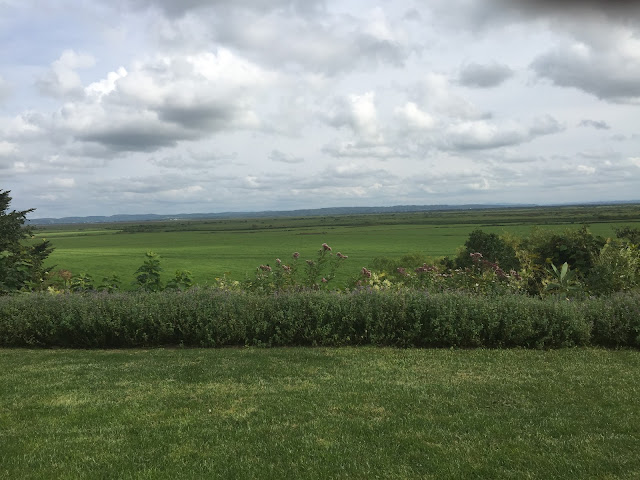 However the landlady had a good idea, and sent me off to the close by Sarobetsu wetland reserve. There is a visitor centre explaining the industrial history of these wetlands and the current fauna and flora. Which one can also admire from a short boarded walk. Even in September a few flowers were still in full bloom: 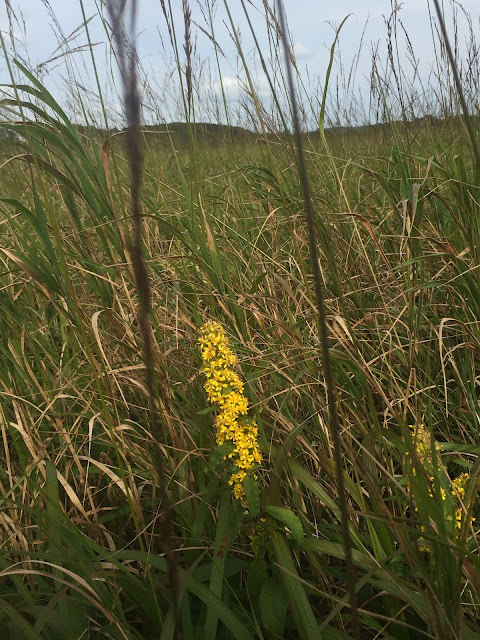 After a cup of milk and some strange fried potatoes I came back to my minshuku, had a long and relaxing bath with a view on Rishiri Island and then a very nice dinner with Milk soup (gyunyunabe 牛乳鍋 ) which all of the guests cooked and ate together. There I met again the guy walking along the road and also an other guy riding by bicycle, but in the opposite direction. Only the youngest on the table did come by car. The guy who came by bicycle came from Haboro today (where I plan to stay the day after tomorrow). It seems that the road between Enbetsu and Haboro is quite hilly, which I kind of expected. But now thanks to him, I also have the time table of the local bus between Teshio and Rumoi, so once I am in Teshio, which is not too far from where I am now, I can always (well, about 10 times per day) hop on a bus and go on, if it gets too tiring.
And this is how your milk soup looked like: 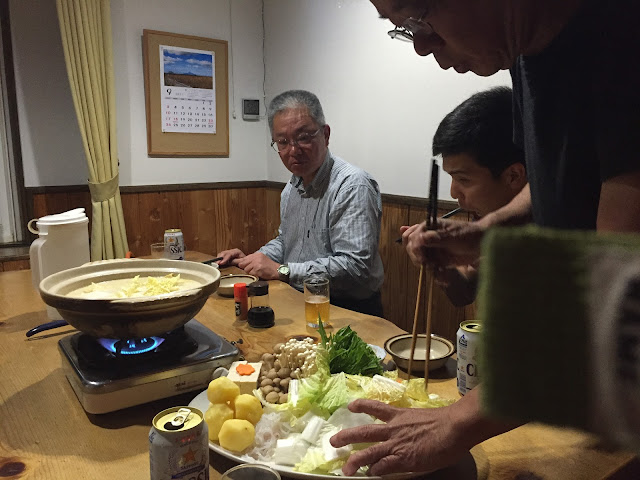 Breakfast tomorrow at 7, but probably I will wake up even before, given the fact that there will be light in my room from very early in the morning. 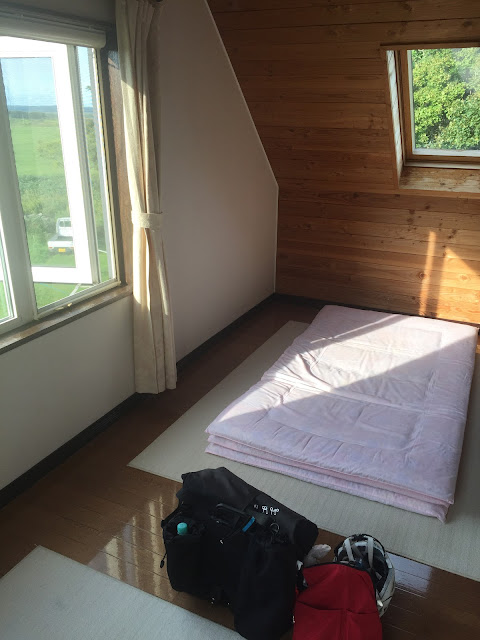