Day 6 - Sapporo to Kitahiroshima and back to Tokyo

This post describes my bicycle tour of Japan, today around Sapporo including a visit to an open air museum and then back home to Tokyo by plane. It also includes one of the best bicycle roads I have seen so far in Japan.

Today was already the last day of this first week of travelling through Japan by bicycle. Now I am flying back to Tokyo and on the day after tomorrow I will leave for 3 weeks to Europe, no bicycle... Well, probably that's a lie, as I hope to buy a bicycle in the Netherlands, just for use around the city.

My last day started with a breakfast in the hotel room, as the complimentary breakfast at Toyoko Inn did not look very inviting. 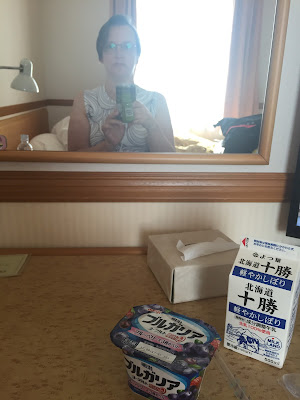 With a relatively late start I set out through Sapporo to the "Historical Village of Hokkaido" Museum, which I already had wanted to visit when I was in Sapporo in February this year, but I thought that visiting an open air museum under the snow wasn't a good idea. So I went today.
I had planned out the ride from central Sapporo to the museum on Garmin, while I was preparing for this trip, but I had planned it from Chitose to Sapporo, instead of the other way round. What I discovered today is that it is not possible (or at least I don't know how), to invert the route directly on Garmin. I would have needed to do this on the iPad and then load the course again. However the Garmin planning web page (as well as Blogger) are not working very well on the iPad. And anyway, I only discovered that the route was the other way round, once I was already starting the ride. I could still see which street to take on Garmin, so it was kind of okay.

I also discovered that Sapporo is a city apparently entirely made for cars. Streets are enormous, often 4 lanes or more, and as it is so easy to drive, many people DO drive. Which makes Sapporo not a city that I could enjoy on bicycle. However, read on, because there is actually one of the best bike rides I have ever made in Japan also in Sapporo!

In the open air museum, examples from old (Meiji or Taisho era) buildings from Hokkaido have been reconstructed. While in the real Hokkaido (as elsewhere in Japan), old buildings are barely remaining, in this museum it is old buildings only. Which are all quite nice. Even the old station of Sapporo has been transplanted here (the yellow building at the right of the picture): 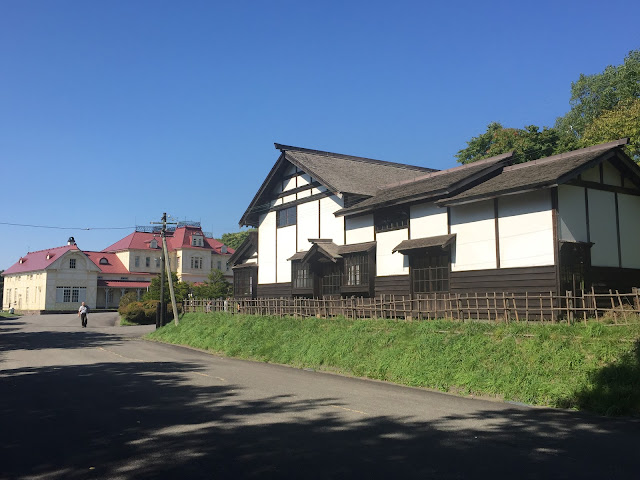 One can even take a horse drawn tram through the small - fake - town. 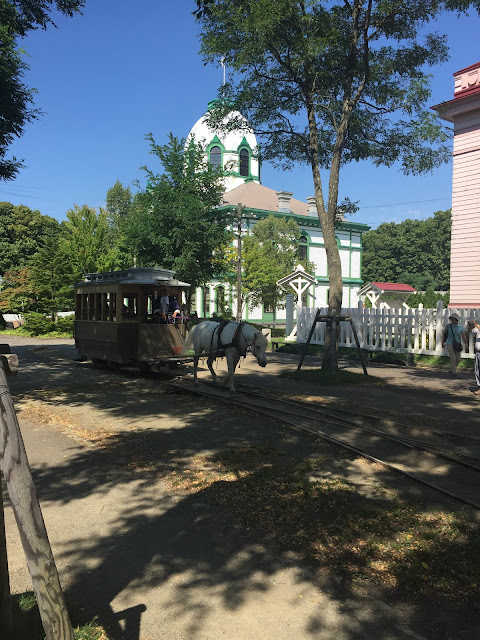 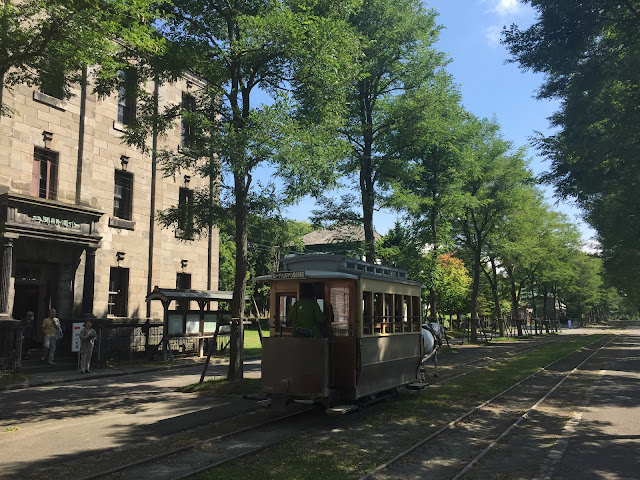 As I had a late start and wasn't very quick in reaching the park, I did not have so much time in the park, but still enough, as only the main explanations are in English, while inside many of the buildings there are more detailed exhibitions, which are Japanese only, and for sure not all of them are interesting anyway.

And I had one more agenda point for today. Actually two: bicycle road from Sapporo to Kitahiroshima and soaking in the Chitose airport onsen. Both accomplished :-)

I had read about this bicycle lane from central Sapporo to Kitahiroshima on this blog, but I still had a hard time finding the road, as I could not find on the internet a real map of it. So once I had finished in the museum, I set out to find this road. Google maps does not know about it, but with some information from the blog above, and Google satellite view, I was able to find it. And this cycle road is GREAT. It was built on the old train tracks from Sapporo to Kitahiroshima, which means that it is quite wide and with gentle slopes. It still has a small hill to get over before reaching Kitahiroshima. Actually on the top of that hill is the "Bicycle station" (自転車の駅). The lane winds gently through a forest and after the busy and polluted streets of Sapporo it was heaven to be on this totally quiet lane.

On the Garmin map below, the ride starts at 2 h 15 min. I also took photos of information boards along the road (which are in contrast to what I could find on the internet) very detailed, and have posted them here.

After taking a lot of pictures of this wonderful bicycle lane, I arrived at Kitahiroshima station in comfortable time for the 15:37 express train to New Chitose Airport. 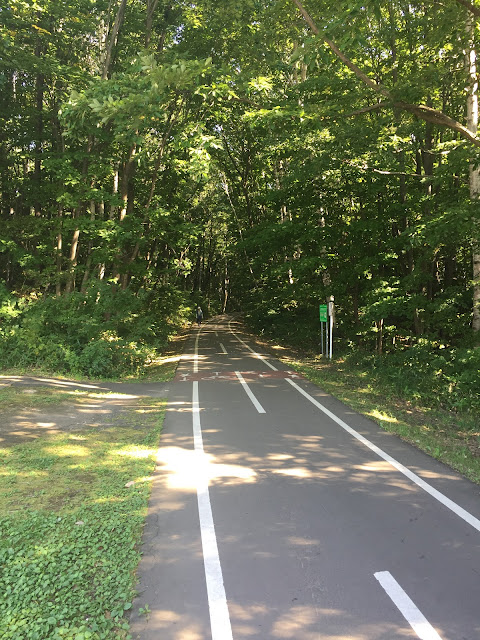 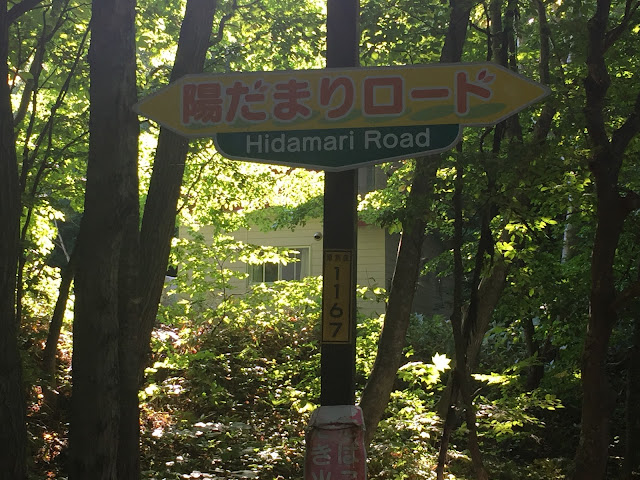 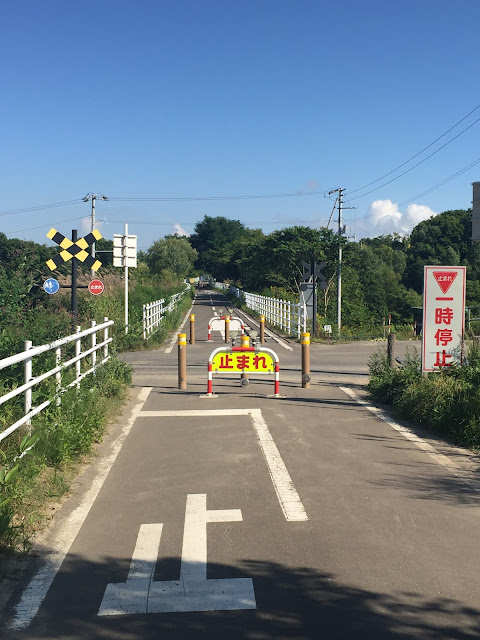 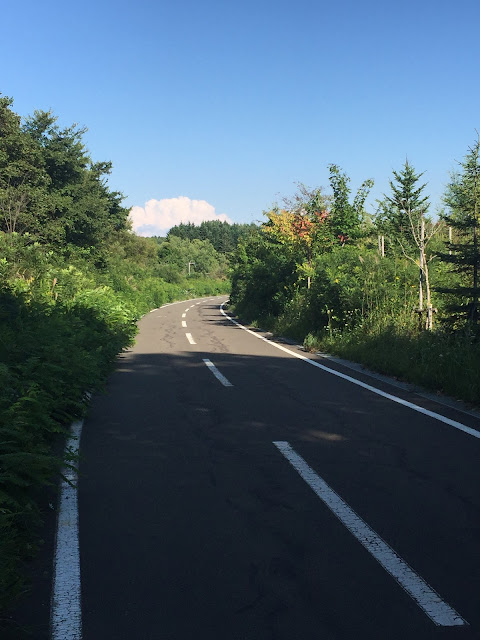 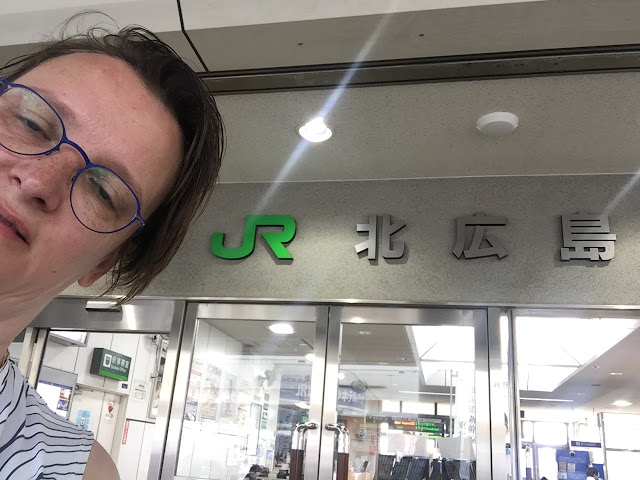 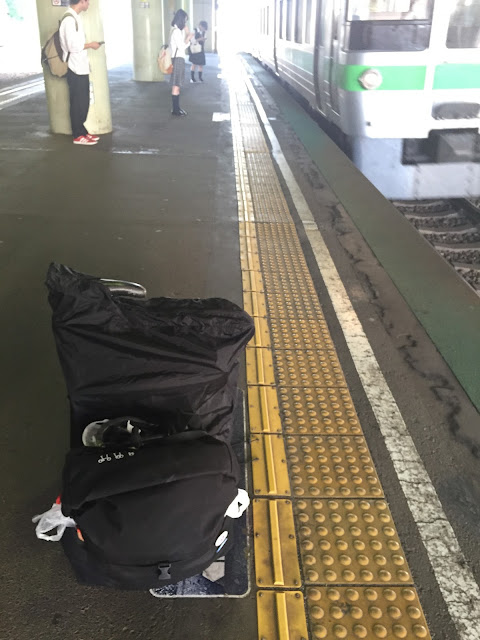 After checking in the bicycle, I still had enough time to relax in the onsen, which is located right INSIDE the airport. Just go up to the 4th floor. It is not very well indicated downstairs, but if you ask, you will be shown to a specific elevator that leaves you right in front. The onsen is modern and with a lot of amenities, but still at a reasonable price (1500 Yen). Unfortunately it does not have a view over the runway. Actually it does not have any view at all, probably due to the fact that Japanese when in an onsen want to see nature (which is hard if your onsen is located on the top floor of an airport) and one-way windows don't seem to be a frequent feature. But it was still very nice to clean myself after a day in the heat (bearable, but heat) of Hokkaido and before boarding. I relaxed in the rotenburo and timed my departure perfectly so that I did not need to wait anywhere before embarking. 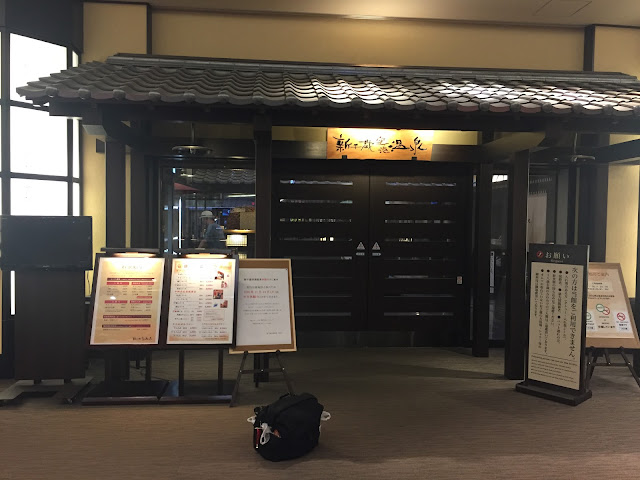 Well, so this was my first week of travelling by bicycle. In the next post I will write a summary of my impressions and lessons learnt.