The second big part of my bicycle tour through Japan started today in Morioka from where I rode down the Kitakami valley and (after some train ride over the hills) made it to Tono.

Bicycle: 59 km
Train: 25 km
Route: Morioka to Iwanebashi by bicycle and Iwanebashi to Tono by train
Riding time: 4:50 h
Total ascent: 371 m (not sure if Garmin did calculate that correctly, as I stopped the device in Iwanebashi and then restarted in Tono after arriving)
Weather: cloudy with a bit of sunshine and also a bit of rain, 10 - 19 C, average 13 C

Today week 2 proper started. After a night in a business hotel in Morioka I hopped on the bike and followed my previously planned route down Kitakami valley. 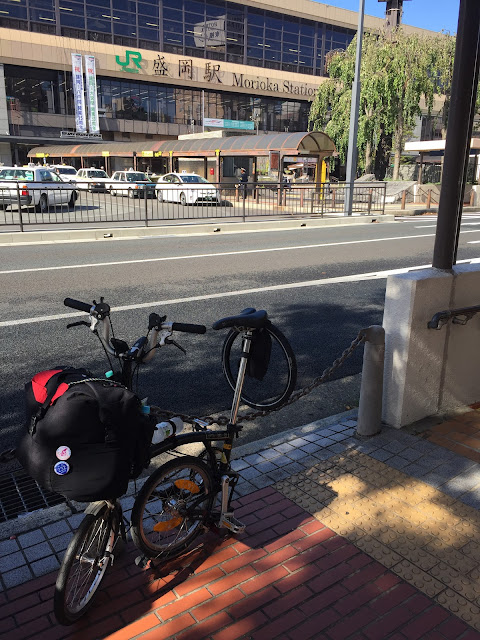 From Morioka city center until where road 36 crosses the river, there is a bicycle lane right along the river. I had hoped that it would continue on, but it didn't, or at least I did not find it. Thus some searching around at km 6.7. 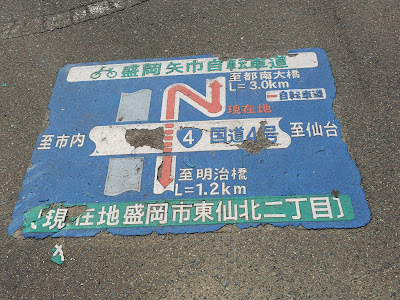 Leaving Morioka was quite quick and after a few kilometers one is already in the countryside: 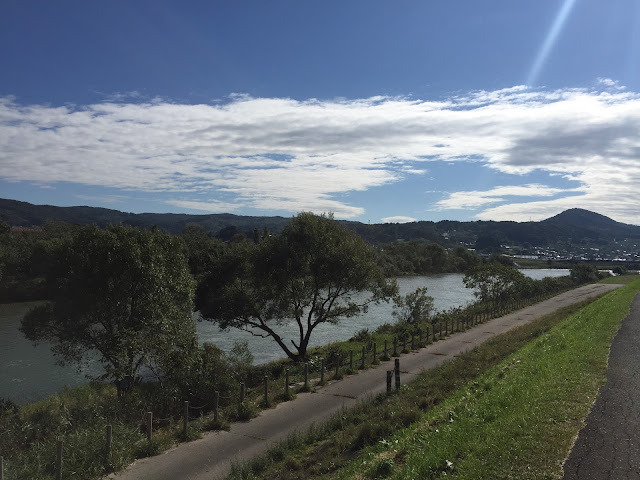 Here the sun was still shining, but as the day went on, more and more, partially very dark clouds appeared. At some point, shortly before lunch, it even started to rain just very slightly. At that point I was anyway hungry and needed to find a place for lunch. After a quick look at Google maps, I decided to go to Shin-Hanamaki station, assuming that around a Shinkansen station there must be a lot of restaurants. Well, not around Shin-Hanamaki station. This enourmous Shinkansen station, where most of the Shinkansen actually just speed through, is like a spaceship fallen from heaven. There is an enourmous road (with no traffic) leading to it, a very tiny local train station just below, a Toyota rental car and one Omiyage shop. But, on the second floor of the Omiyage shop there was a restaurant, where I got a hot bowl of ramen. Very warming... Which was good, because it was actually quite cold today. So cold that at some point I needed to get out one of my cardigans. (Still riding though in sandals, short skirt and no tights...)

Apparently not only the valley around Nagano is famous for its apples, but also the Kitakami valley. As often in Japan, freshly produced crop is being sold along the street. I bought 3 enormous apples along the way for 100 Yen ! And the lady (this was a manned stand, not as others where there is just a box to put your money in) even wanted to give me two more... but there was literally no further space in my bike pack. 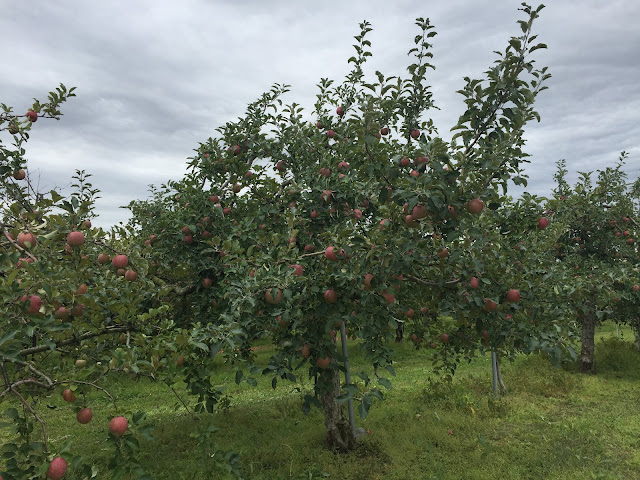 Apart from apples the region is dominated by rice paddies. Some already harvested...


(A lot of question marks in the caption above, as I really don't have the slightest idea about rice and rice harvesting.) 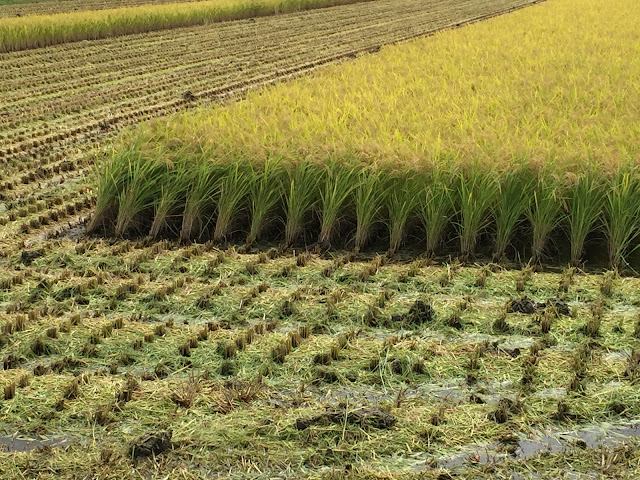 ... and others still growing: 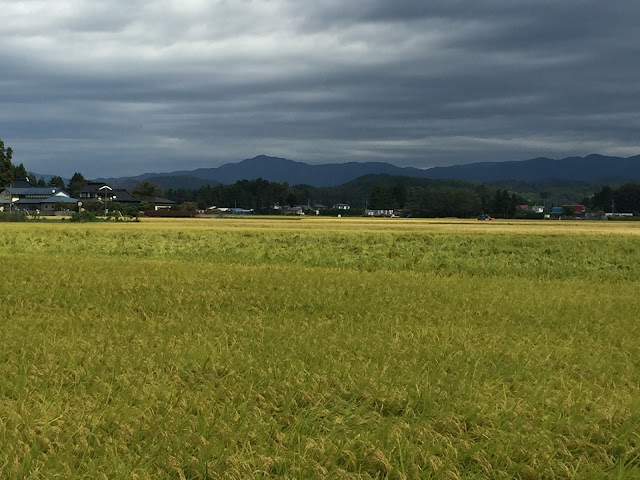 In the photo above one can also appreciate the dark clouds, which eventually did lead to some rain prior to lunch.

After lunch however the weather was much better and even the sun was shining again, while I followed the tracks of the Kamaishi Line into Tono valley. As there is a huge (at least for me) mountain between the Kitakami valley and the Tono valley, I had always planned to do the mountain part by train. Which was a good decision not only because of the mountain but also because of the rain, which started (slightly) again just prior to me reaching Iwanebashi station (at km 58). 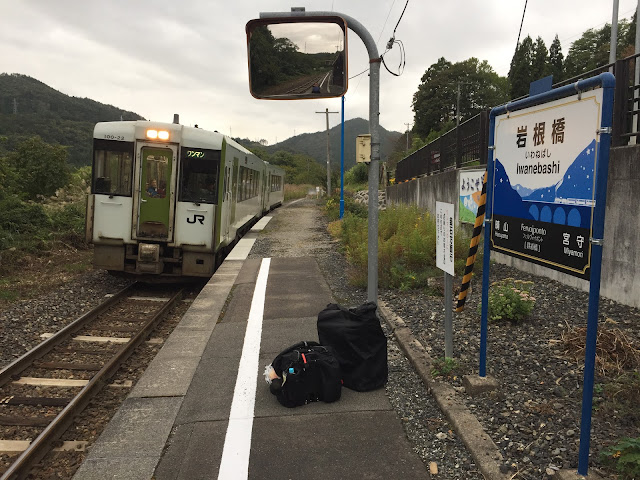 I originally had planned to ride only to Kashiwagidaira from Iwanebashi, i.e. only across the mountains and then to take a bicycle lane that supposedly exists in Tono valley down to Tono city. However it rained... 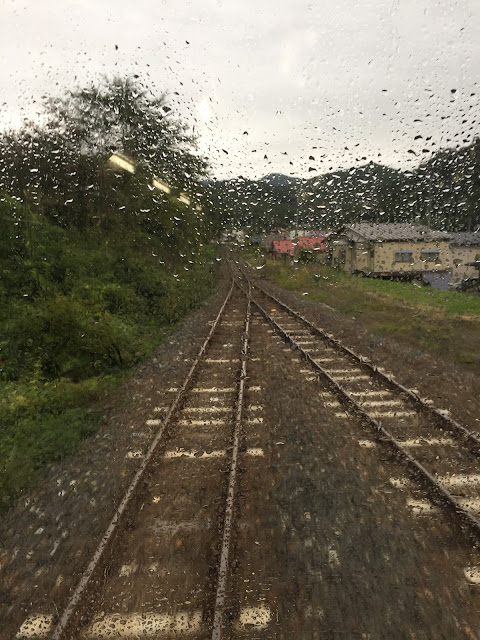 So I took the train all the way to Tono, where it was still raining, but luckily the ryokan I booked is quite close to the station. 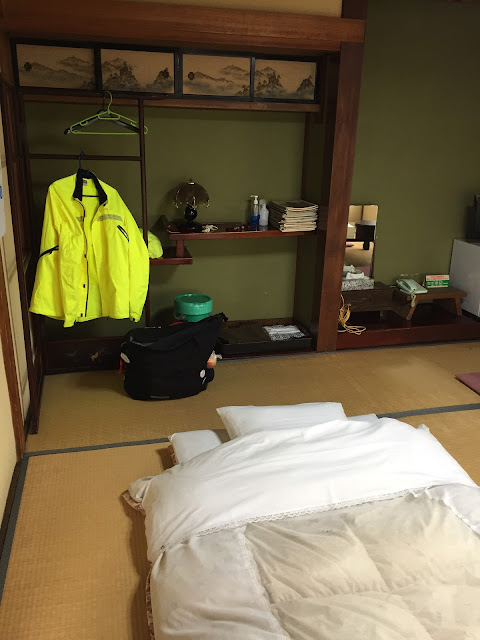 It is actually a very traditional building, but I haven't taken yet any pictures from outside (rain) nor other pictures inside... But dinner is up soon and then into the hot tub!

In the two maps below, the very straight part between Iwanebashi station and Tono station was not a ride... I had actually stopped Garmin for the train ride and then resumed the ride at Tono station... but instead of separating it from the first part of the ride, Garmin just assumed that I teletransported myself to Tono station... which I unfortunately am unable to do.
So learning for the next time... stop the ride before taking a train!