Day 37 - Ise through Nagoya back to Tokyo 伊勢から名古屋経由で東京への帰り

This blog post is about the final day the second leg of my bicycle travel (Day 7 to Day 37) through Japan, returning back to Tokyo.

Bicycle:  less than 500 m
Train: 510 km
Route: Ise to Nagoya, Nagoya station to railway museum and back, Nagoya to home in Tokyo, all by train
Weather: Rainy and cold, probably around 15 C


After one month riding through Japan on bicycle, but also on train, bus, ferry and even taxi, today I came back home. Only for a few days to attend to some business in Tokyo next week and to escape from the rain and typhoon.

I was lucky in the morning that exactly in those few minutes it took for me to get from my hotel to the station (a very venerable one judging from its facade) it did not rain. But that was more or less the only moment of the day without rain. 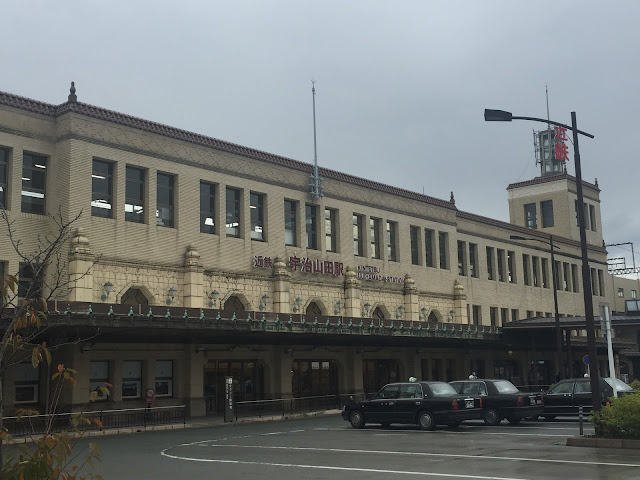 Today that didn't matter though, as the plan foresaw a museum, the SCMAGLEV and Railway Park museum in Nagoya. Originally I had wanted to visit this museum already back on Day 32, but had been prevented from doing so by typhoon #21, which had severed the train connections from Takayama to Nagoya, meaning that the time I had planned to spent in the train museum, had been spent waiting for a bus to get out of the train deprived Takayama.

But today was a good day for a museum as well. Maybe not ideal, as it was Saturday and raining, so I was far from being alone in the museum.

The star of the museum without doubt is the Maglev superconducting train: 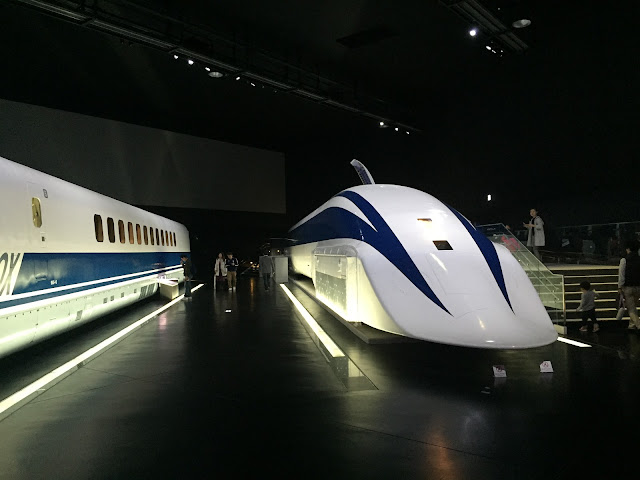 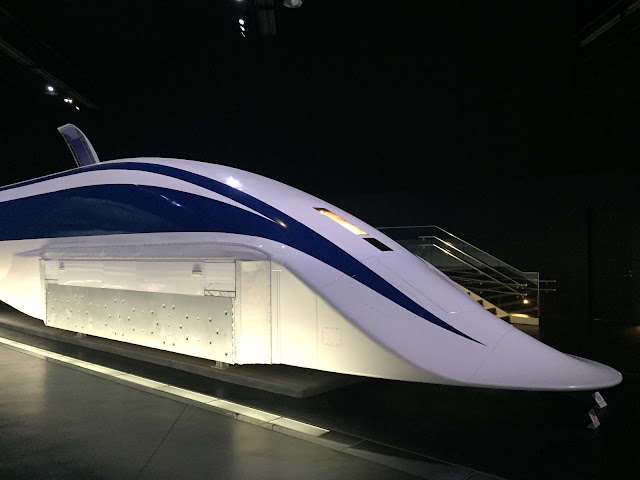 One has to admit that the interior of this test train is below expectations, but I guess they have simply put in some old normal shinkansen chairs, just to have something to sit on. 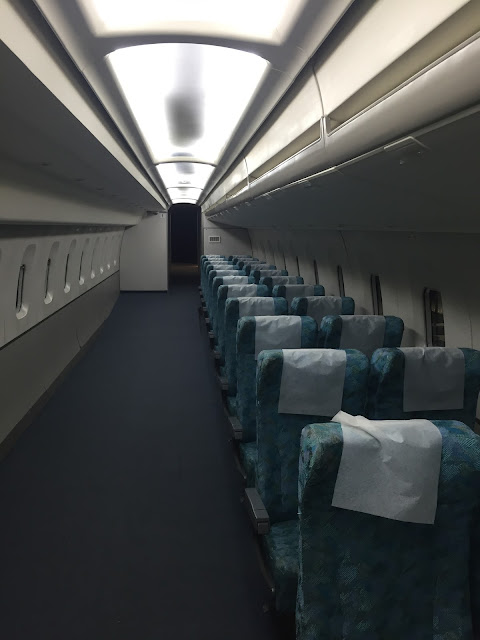 There is even a small theatre where one can experience (kind of) how a ride at 581 km/h in a Maglev train would feel like. Including the vibrations.

There is also an other room to do some shinkansen driving simulation, but the tickets for that are so few, that there is actually a lottery system, and well, I did not have luck. But at least I got a picture of me taken (in an other) shinkansen 700 class, i.e. the same type of shinkansen I would take a few hours later from Nagoya to Tokyo. 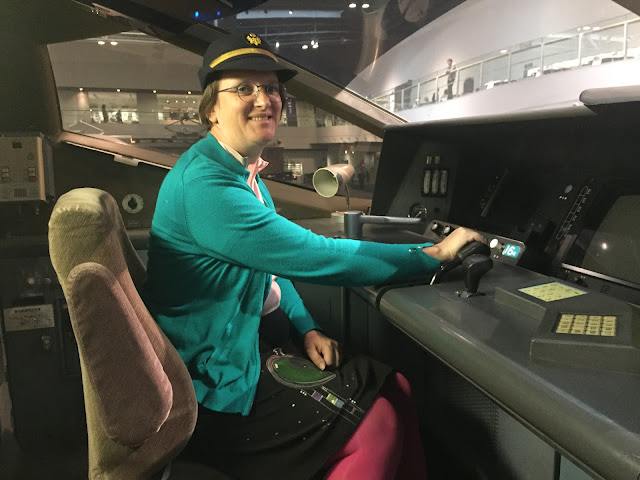 On this map a day in the shinkansen between Osaka and Tokyo (i.e. Tokaido line) can be seen, with all the colourful spots indicating shinkansen as they are leaving Tokyo / Osaka and sprinting to the opposite end of the tracks. Running just a few minutes behind the previous one, taking over the slower Hikari (red) or Kodama (blue) trains on their way. 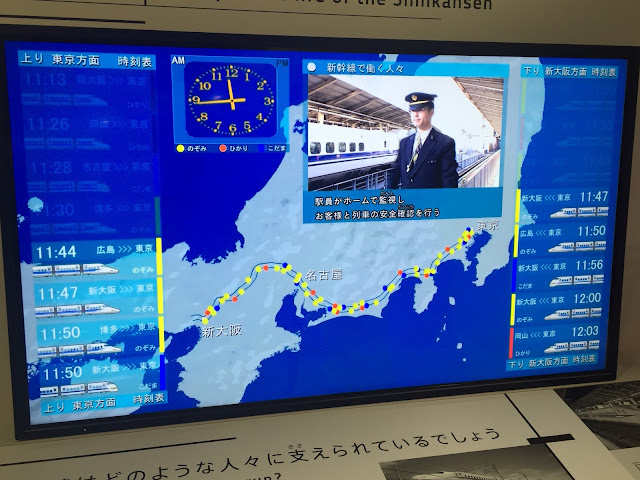 But here in the museum they are all parked, waiting patiently to be observed by train admirers. 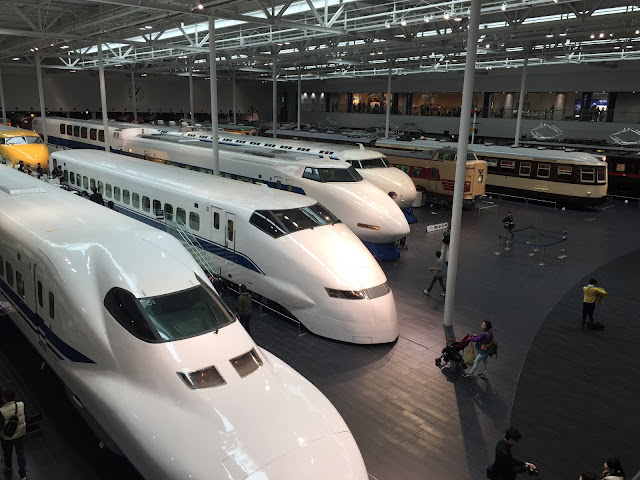 But it is not shinkansen only. There are also old steam, diesel and electrical trains, old wooden cars, old sleeper cars ... and many different train noses: 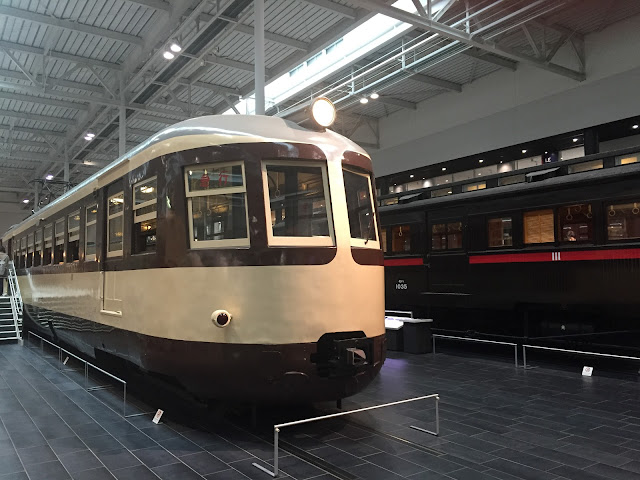 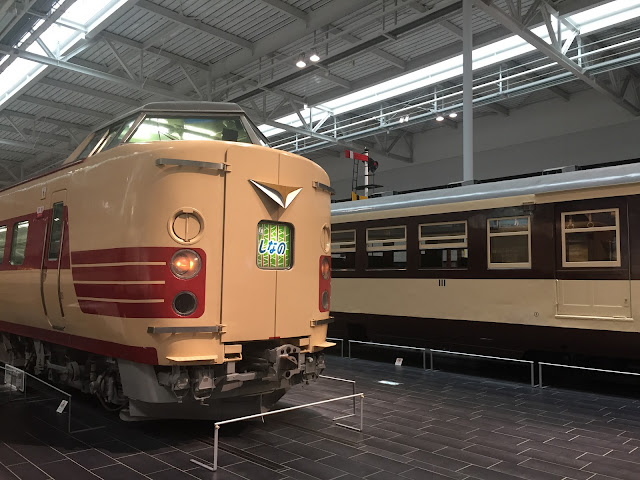 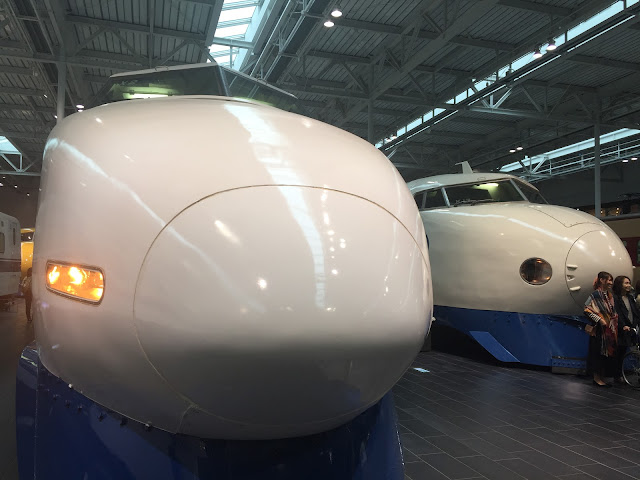 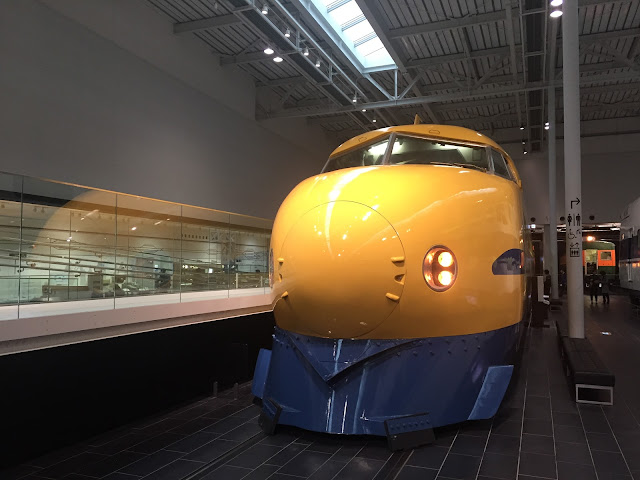 All with very good English explanation both on panels as well as in the audio guide.

The yellow shinkansen above, is the so-called Dr. Yellow, a shinkansen that was used for technical inspection of the tracks. The one in the museum is the old Dr. Yellow based on the original Shinkansen 0, but even today the inspection train is still yellow. Just apparently a slightly different shade of yellow.

Once upon the time, when shinkansen were not as fast as they are today, they still had board restaurants. Very stylish ones, that apparently attracted big crowds and some people specifically took the shinkansen to have lunch/dinner on the train. No more of that today... 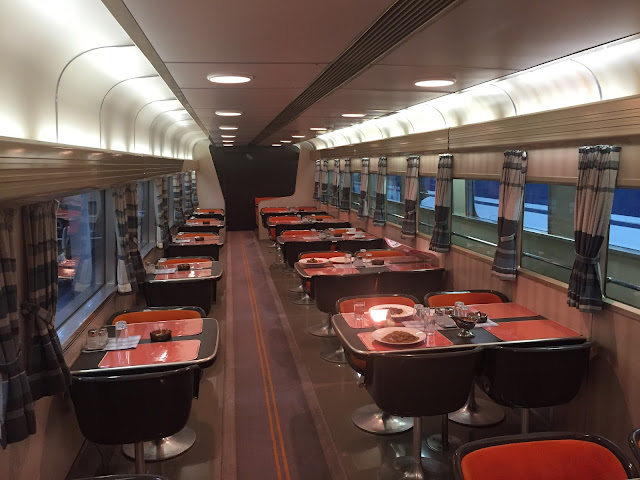 Getting back to Nagoya station involved a ride on a Lego train!!! (Legoland is just next to the train museum): 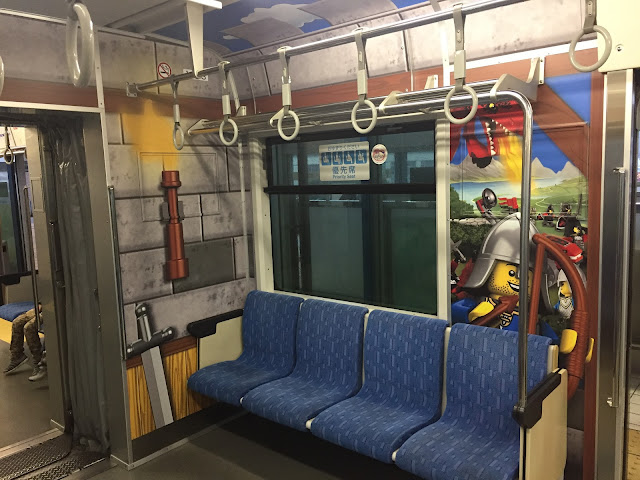 Well with this train overkill I boarded a shinkansen to Tokyo and made my way home, where I will stay for the next few days, and then off again towards the mid and South of Japan for further rides on the bicycle!