This post describes bicycle ride down from Nyuto onsen to Kakunodate, an old samurai town, which has been preserved quite well. I also made it to Dakigaeri gorge close-by.


Today bye-bye to the mountains and onsen and down the hill to Kakunodate. It was really more a rolling down than a ride today. However specially the first part until the plain around Senboku was - like yesterday - quite steep and it is actually not so nice to roll a hill that steep down. 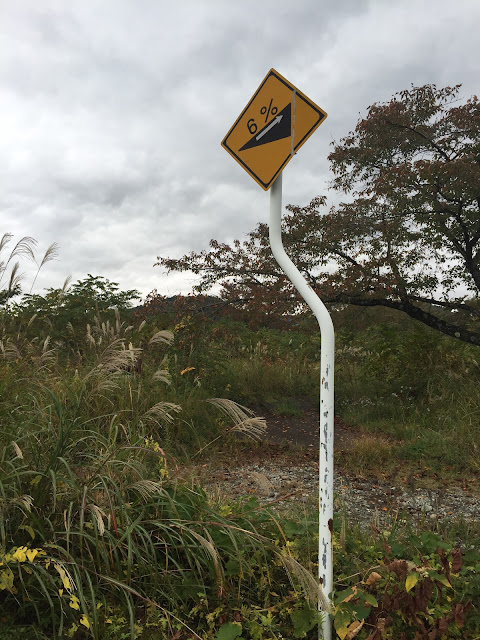 So I did again a lot of intermediate stops on the ride downhill, to let the breaks and wheels cool down and to relax my hands. Doing so I took some more pictures of the surroundings. 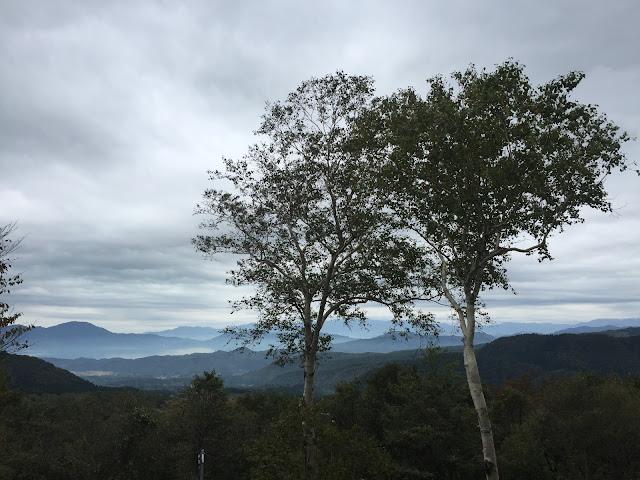 I specially noted this kind of very long grass, which seems to be very typical of the current season and this region. 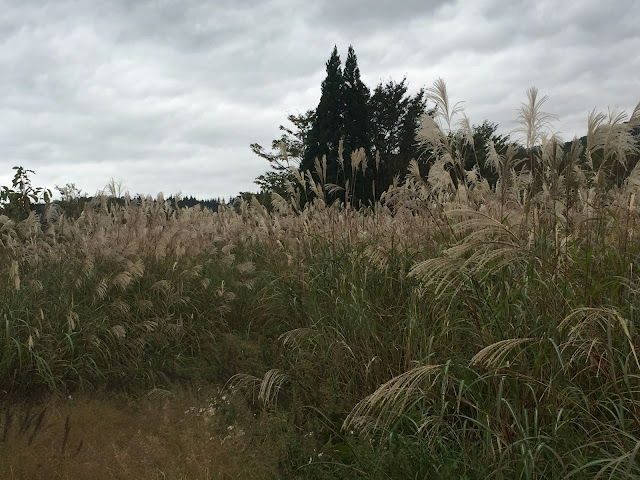 I also saw this extremely cute road block. Who wouldn't want to stop for a panda eating his bamboo? 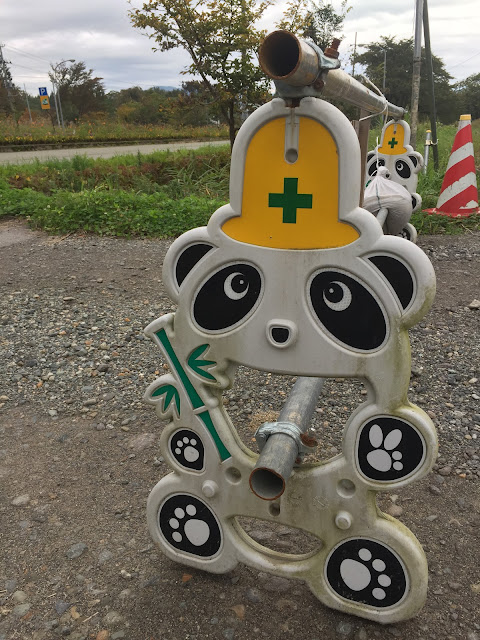 For a small portion in Senboku, I had a small countryside road, but then the only possibility to get down the mountain was road 46. It has some traffic, nothing too bad, but as it is also not so wide, it's not a perfect ride.

Halfway down I made a stop at a forest famous for its skunk cabbage. This plant is really called like that and it's actually very beautiful, but not flowering now. However the forest is still there and I made a few steps inside on the boards.

It was actually rather creepy. With water flowing below the planks, different ways intersecting and trailing off into different directions, some of them very overgrown. 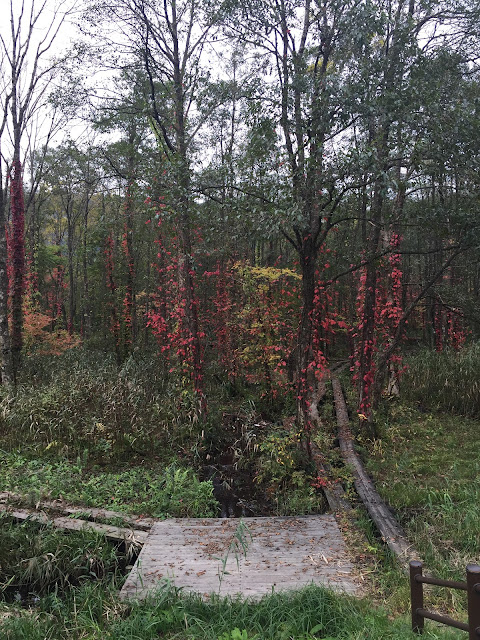 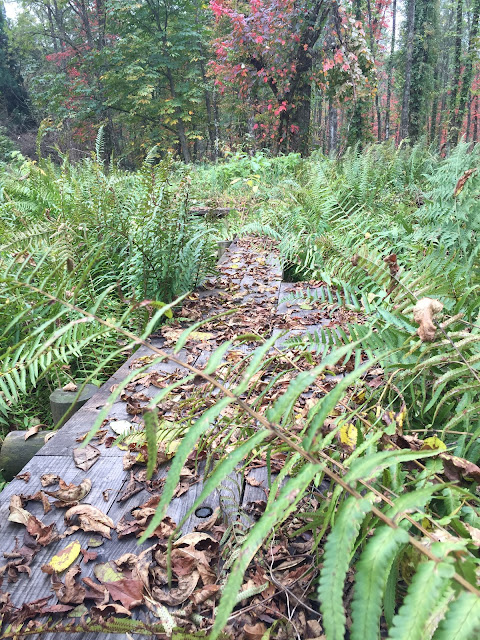 Being there completely alone was somehow very creepy. I don't really know why, as the forest is close to the road, it was broad daylight, but still, I did only venture briefly into it and was happy to come back to my bike.

After some more riding down hill, I made a detour to Dakigaeri gorge. As at breakfast only one slice of grapefruit as fruit was left, I decided that banana covered in chocolate could also count as fruit and got a stick before venturing in the gorge. 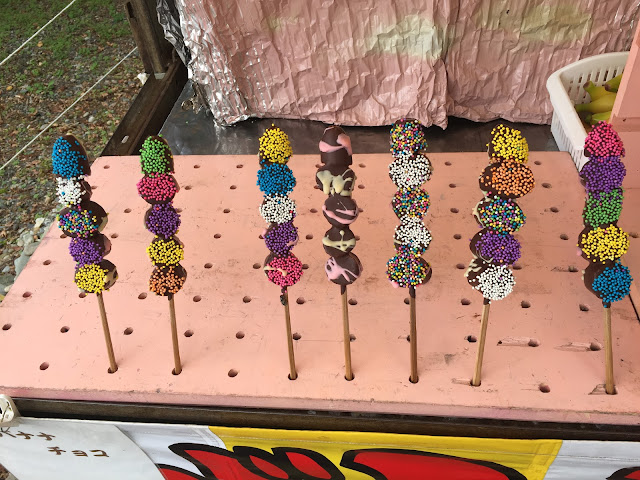 Most Japanese I encountered while eating the banana made some kind of comment about it. Apparently it is not culturally acceptable for a 40 something to eat a banana covered in chocolate before lunch. Actually it wasn't even very tasty. The surprising thing was, that the chocolate didn't taste of anything. So essentially it was only a banana. So fruit, right?

This bridge marks the entrance into the gorge. 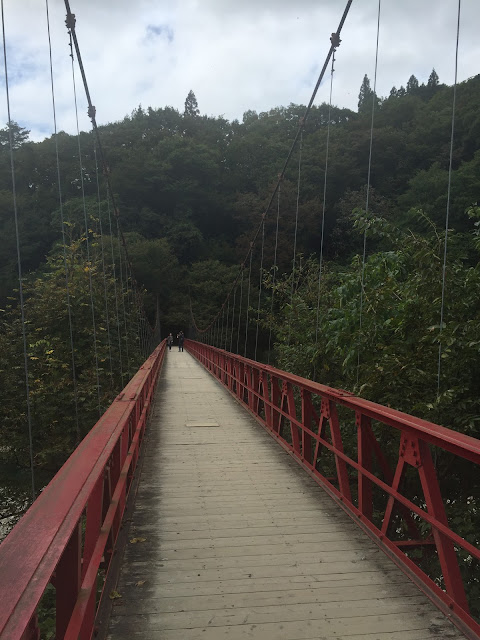 The way itself is an easy hike, well actually less a hike than a walk. It's not steep at all. Sometimes one gets a glimpse into the deep blue waters of the river. 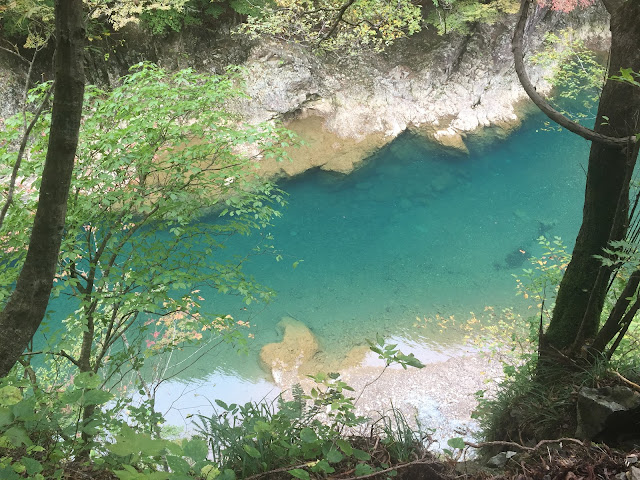 At the current end of the walkway, there is a waterfall. 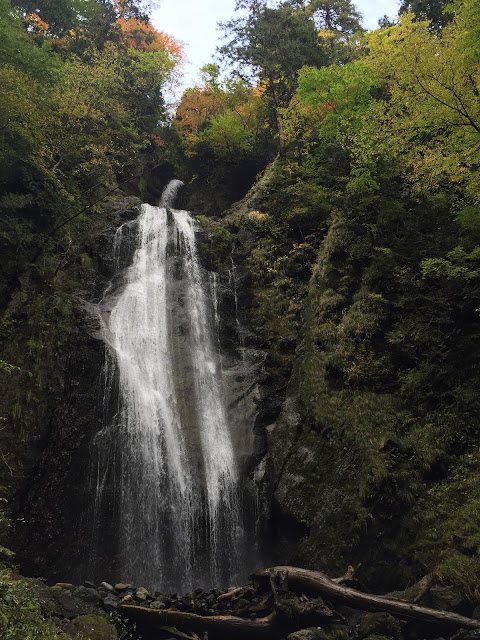 It seems that the path originally was much longer, but somehow did get partially destroyed, so for now only the waterfall is reachable. But it still makes a nice walk, with several scenic bridges and even a few tunnels. 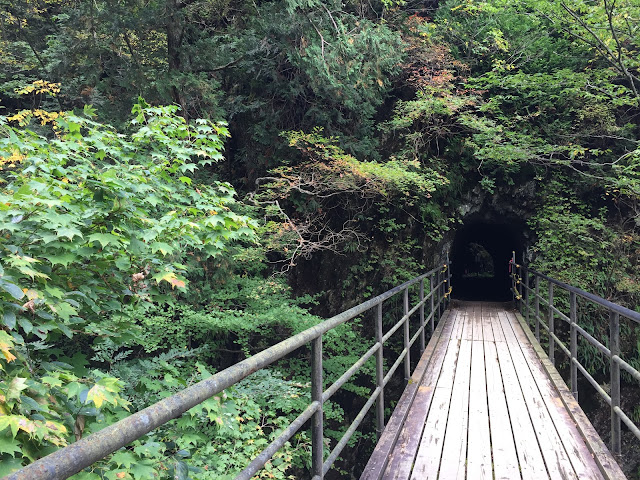 At the starting point of the hike there were some food stands, and at one I even got a freshly prepared Yakisoba. Actually when I came to the stand it looked completely closed, but I asked and the stand owner told me that, yes, she would definitely prepare some yakisoba for me. I am not sure if it was closed because it was late (13:00) or because it was early (koyo matsuri is only starting tomorrow). Anyway, I got my Yakisoba.

For koyo, i.e. colourful autumn leaves, it was however still to early. A few trees only showed first indications of changing colours, but nothing decided yet. 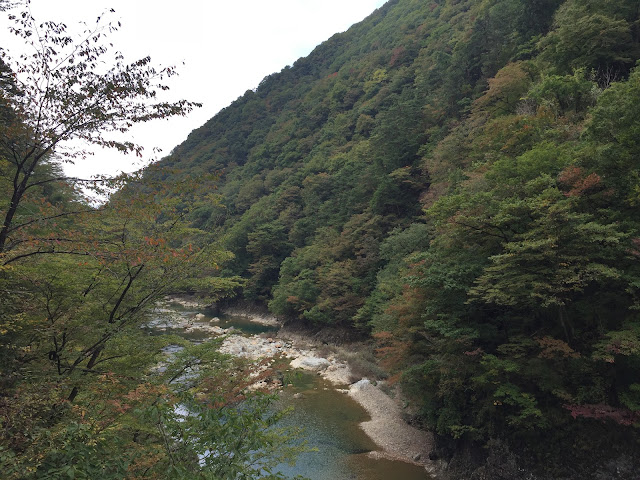 From there I took a very straight road, with little to no traffic right into Kakunodate.

Kakunodate wasn't on my original plan as I had thought it would be hard to reach by bicycle. I hadn't realized that from Tazawa lake it is actually very close. And Tazawa lake and it's onsen were always on my plan... 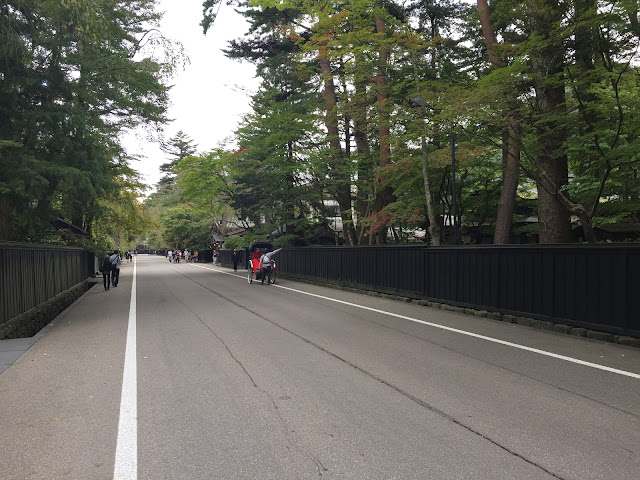 I went to three samurai mansions. The nicest was probably Ishiguro house. Aoyagi house is very big, and does have some interesting exhibits, it has however also a lot of shops inside, which I found a bit distracting. 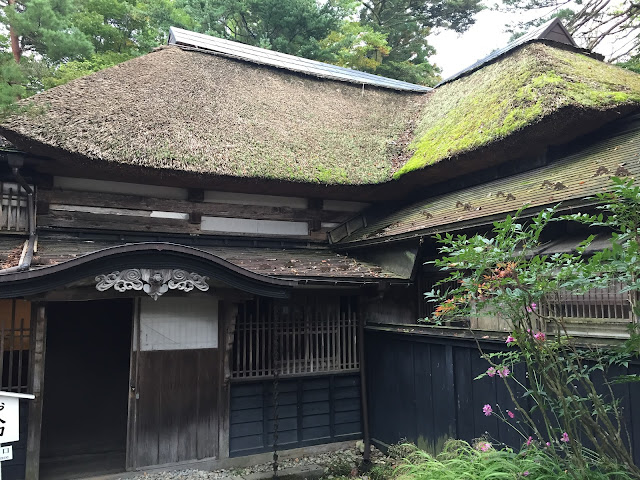 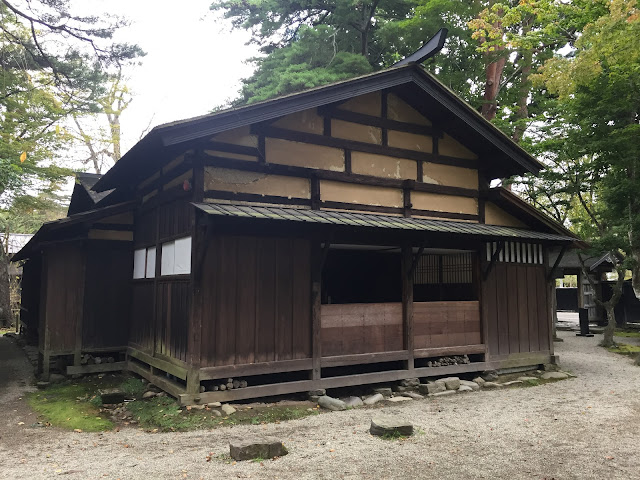 Opposite one of the mansions, a dahlia garden was in full, spectacular bloom. 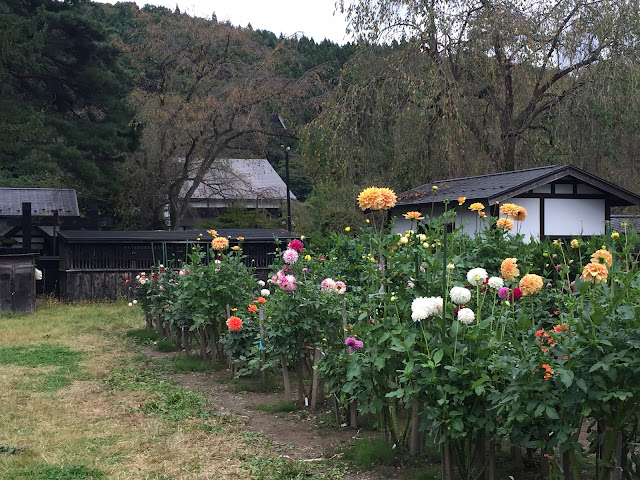 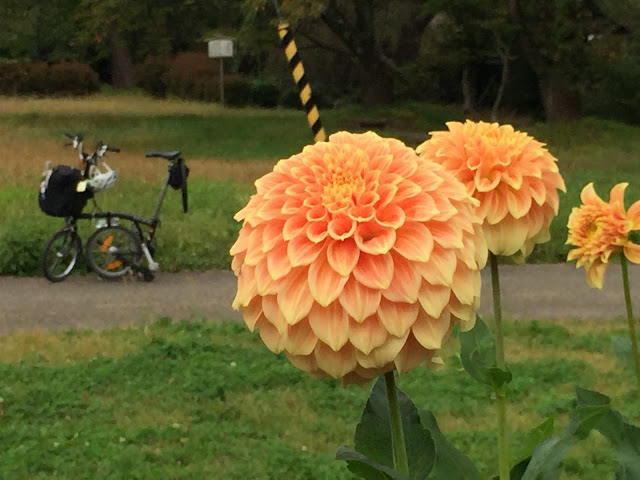 These dahlias are gigantic. Some of them big like a head: 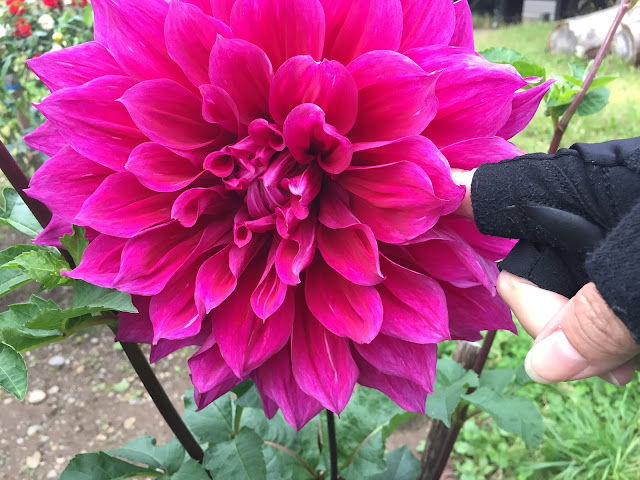 Kakunodate, as probably many other places in Japan, was divided in a samurai and towns people area. Also in the downtown area, still a few old buildings remain, like this shop, that also seems to still sell the same things like 50 years ago ... 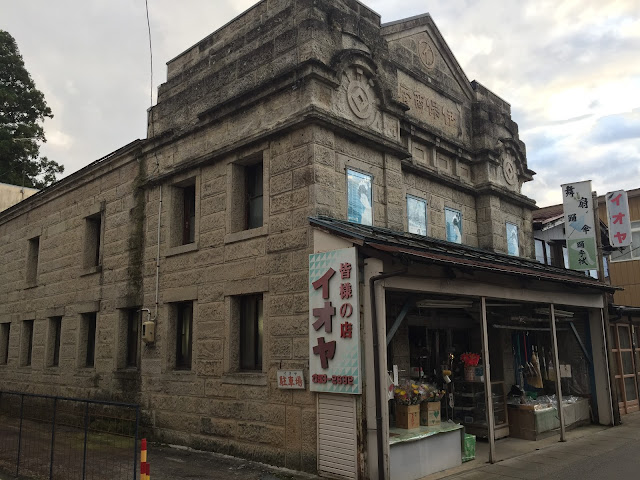 ... a miso factory, which has an old brick building, constructed in the hope that it would withstand the next fire. 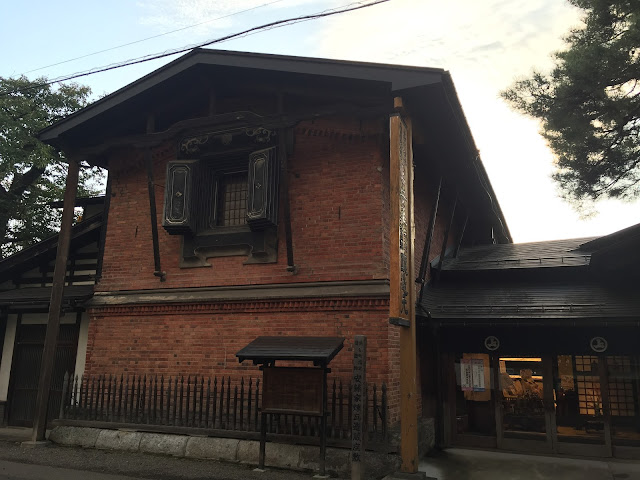 With that today's sightseeing trip came to an end, and I checked in to my room in a onsen right in the center of Kakunodate. A simple, Japanese room, but again, similar like in Noheji, very newly made. The only drawback is that there is no wifi, so this post will go life only tomorrow.

Tomorrow I will travel on to Yamagata. Still need to checkout the weather, which was not too promising.