Surrounded by water, hot below and cold and windy from above, I am sitting out a day in Hirayu onsen. Ideal place to be during a typhoon, instead of on a bicycle or actually anywhere outside.

On Day 31 of my adventure of bicycle touring through Japan, I am far from my bicycle, which is down in Takayama hopefully getting cleaned and sitting out typhoon number 20 in my onsen hotel in Hirayu onsen.

Essentially I haven't done anything today. I did update a few blog posts and tried to find a way to make this page more easily searchable on Google as I hope that specially the planning section will be helpful for other bicycle tourists as well. But haven't really understood how to do that.

I spent the morning in the lounge area, sipping some cold Hida (i.e. local) milk while outside the rain poured down. 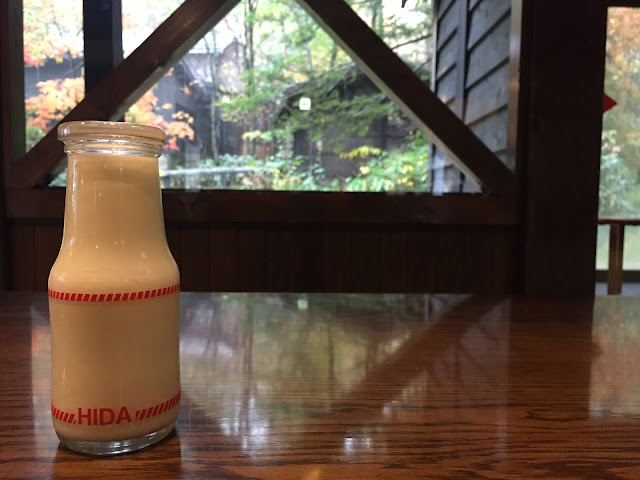 Yesterday I had looked up other onsen places with nice rotenburo here in the valley, but with the incessant rain and wind, I had absolutely no desire to get outside. So I just had a soak in the rotenburos here at the hotel. In total I have now tested 7 of the 9 women baths rotenburos. The great thing is really that they vary so much in temperature. Today with the rain, the slightly hotter ones were nice, but I needed to get nearly all under (well, head and hairs obviously above the water) to not get hit by the rain.

This typhoon 20 is apparently one of the latest ever to hit Japan. I.e. normally typhoon season is over by end of September. Plus it is huge and it make a visit to the entire length of Japan. It is currently rated per the Japanese meteorological agency as "very large" and "very strong".

Luckily for me the center of the typhoon will not hit here, but even the area with "violent wind" (i.e. red area in the below picture, which will essentially hit most parts of Honshu and the Eastern half of Shikoku is very windy and full of rain (above 30 knots = Beaufort 10). The center is about 85 knots = above Beaufort 12, i.e. like a hurricane. I guess my Tokyo colleagues will get a day off for typhoon tomorrow. 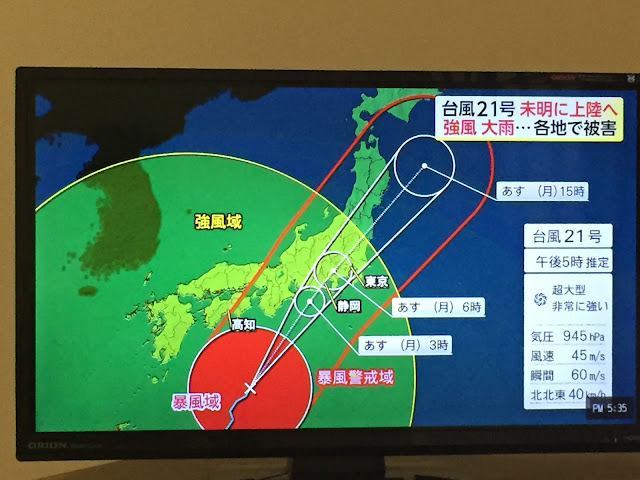 Tonight the center of the typhoon will hit Shizuoka (where I will arrive tomorrow evening) and tomorrow morning early it will hit Tokyo and then onward over Tohoku.

This poor TV reporter was standing just a bit ahead of the red area. All those gray lines you see, are rain pouring down more intensively than a cold shower. 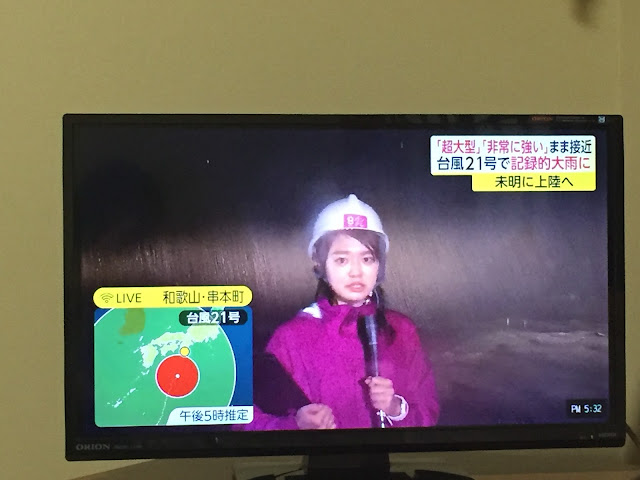 The good thing about this typhoon however is that once it has passed, here in Gifu tomorrow, the sun will finally come out again and it seems that the "normal" Japanese autumn weather with sunny, temperate days will be back. Finally! And I will be back to bicycle touring of Japan!