An other day without bicycle touring, but today some sightseeing in the centre of Takayama, specially Takayama Jinya, and then on to the heaven of onsening: Hirayu no mori, with 9 different rotenburos in the female section alone!


For today, tomorrow and Monday essentially only rain is forecast. But there is light at the end of the rainy tunnel. It seems that from Tuesday onwards finally the sun will shine, and the typical sunny and dry autumn weather will return to Japan. So when I studied yesterday my possibilities for today, I decided on waiting out the rain in more water, onsen water! Initially I thought of going to Gero onsen, just a station or two by express train from Takayama in direction of Nagoya, but then I saw pictures of Gero onsen, and was negatively impressed by the ugly town. Luckily however an other onsen resort close to Takayama was suggested, Hirayu onsen. I have to admit that I have not yet really explored the village, but I have explored the rotenburo at my hotel. 9 (!) different rotenburos!!! What a feast for me!

As I didn't want to spend a lot of time searching for the ideal accommodation, I just called the first onsen accommodation mentioned in the above web page, Hirayu no mori. And I got lucky as there was still a room, without toilet, but at a very reasonable price, available for 2 nights.

However before coming up to this bliss of rotenburo-ing, I had a morning at Takayama visiting the town. As seen already yesterday, Takayama gets its share of tourists. Essentially Takayama is famous for 3 sights (plus the Takayama matsuri):

After leaving my baggage and bicycle at the bus station of Takayama I walked into the town. Not without buying my third (!) umbrella. This time I opted for a lightweight, small, lightblue one, in the hope that I will not forget it somewhere and can actually add it to my standard luggage. In the end I used it only for a relatively brief time, as finally it did not rain that much and long as predicted.

My first touristic stop of the day was the Takayama Jinya, an enormous administrative building from the Edo era. Initially from outside it does not seem too big: 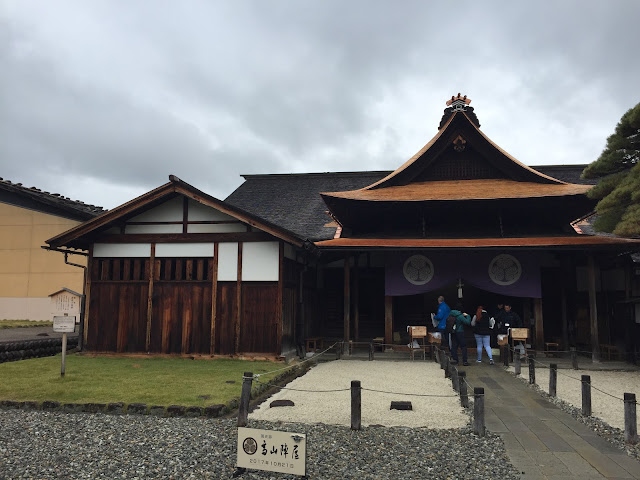 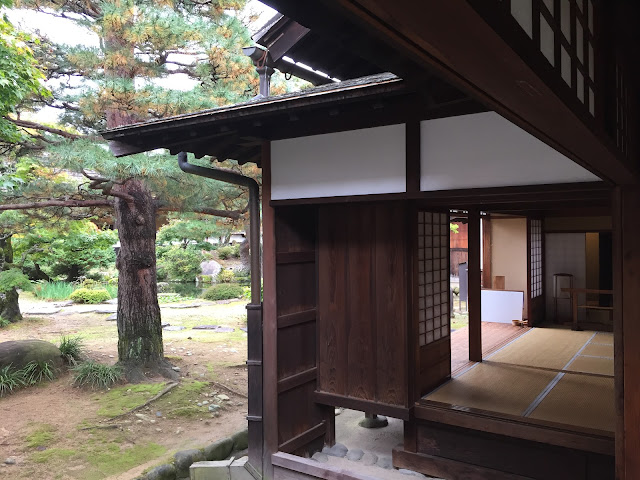 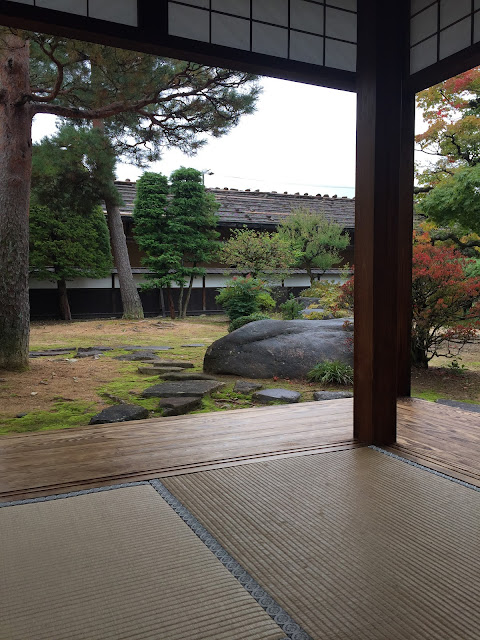 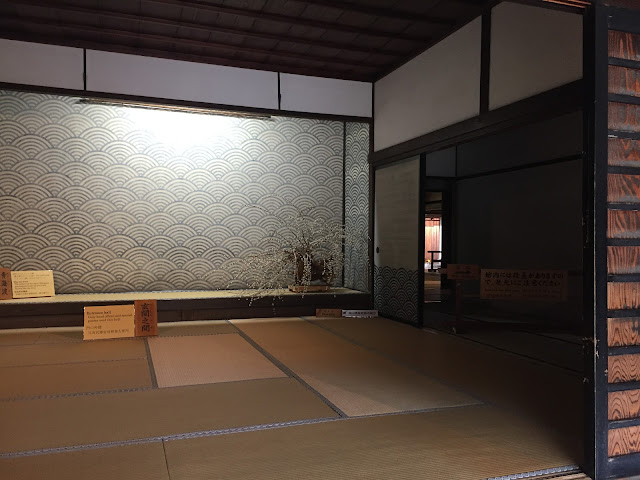 What in the above picture looks like some spring flowers, is actually sticky rice decorated on thin branches: 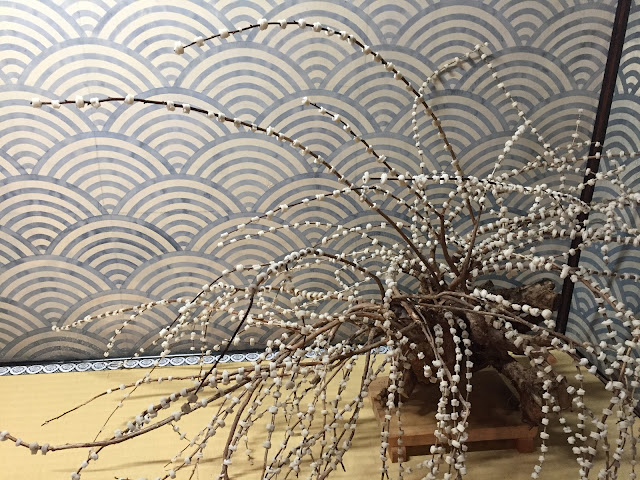 Right in front of the Jinya one of the two morning markets was held. Well, I was not very impressed by it. Just a small market where local farmers (I guess) sell their apples, vegetables and pickles. Nothing impressive. Any normal market in France, Italy or Germany is much nicer. It also seems to be only visited by tourists.

So I continued my way into the old town of Takayama. In Takayama a good number of old houses have remained. However the street that is best maintained is also the street with most tourists and only touristic shops. Not really a place I enjoy to visit. 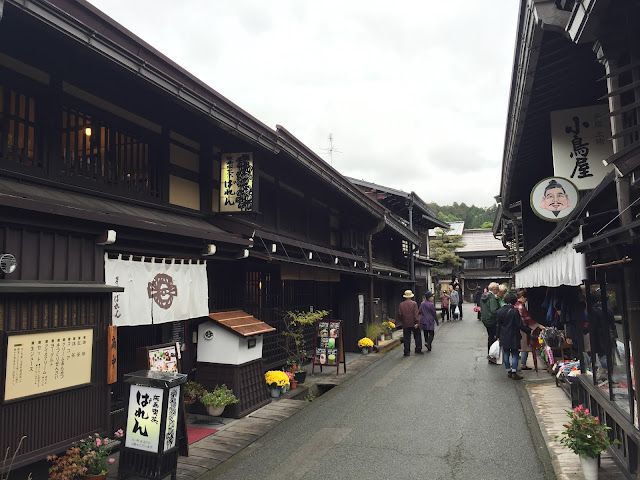 Reaching one major cross road I already wanted to give up on Takayama as I thought (erroneously) that the old city part would finish after that cross road. However after some Google maps confirmation I continued on, and saw a part of Takayama that I found more enjoyable. Still touristic, but the farther away (and the closer to the Takayama float museum) the more normal it got. Some houses even seemed to be just normal houses were people actually still lived... or sold tractors! 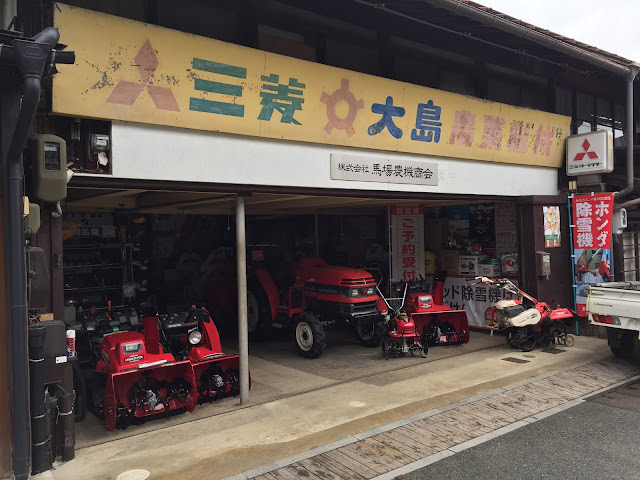 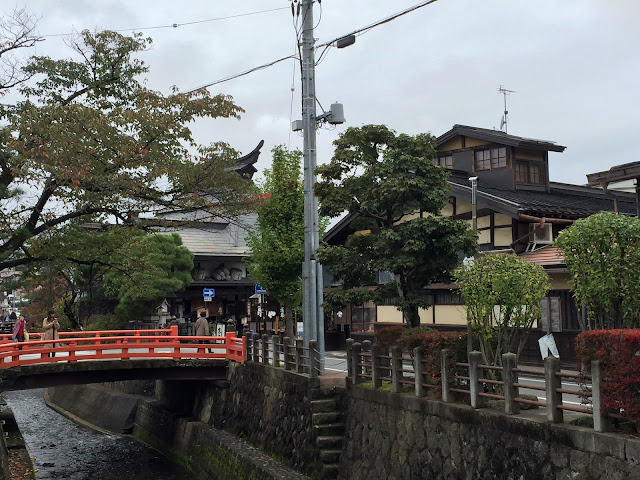 I had an Italian lunch and then returned to the station to gather my bicycle. In the meantime I had decided to NOT bring the bicycle up into the mountains, but to try to use the two days I would be soaking (and getting really, really clean) to also get my poor brompton clean. After a first failed attempt, I found a bicycle shop (very basic, Japanese style village bicycle shop) in the center of Takayama where I convinced the owner to clean up the bicycle. He thought (rightfully?) that this should be something I should be capable of doing... but after asserting that I am completely incapable of even cleaning a bicycle, he accepted. And I will pick up my bike on Monday morning when coming back to Takayama. Obviously no receipt, no names or phone numbers exchanged... but we are in Japan.

Then I made it again back to the station, recovered my bag from the locker and on to the next bus up into the mountains around Hirayu onsen which left only a few minutes later.

The bus did wind through the mountains and unfortunately the windows got damp very quickly, so not much of a view, but the little I did see: finally KOYO!

My hotel-cum-onsen (well, really more onsen-cum-hotel) is right besides the bus station. A large complex, but not like some of those ugly high rise onsen hotels, but kind of labyrinthine large, with a lot of cottage like houses linked by long, tatami-clad corridors. 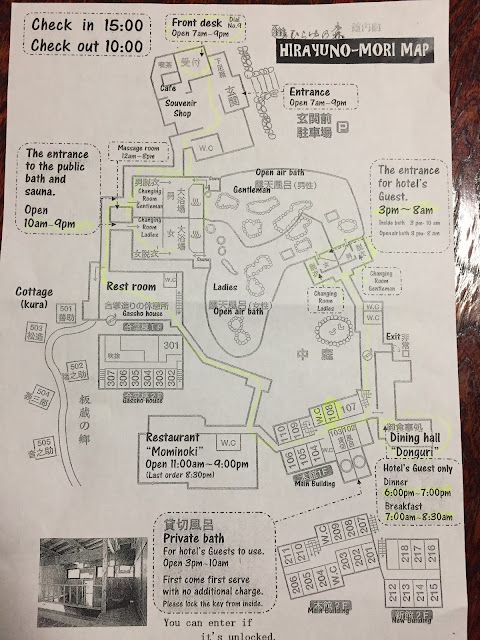 It takes about 5 min from my room to the front desk "hiking" through the hotel.

However in the middle of this labyrinth, there is the onsen. With 9 (!) different rotenburo in the women section (plus a few inside pools as well) and views into the surrounding autumn forests, which I enjoyed during a long (1.5 h?) soak. 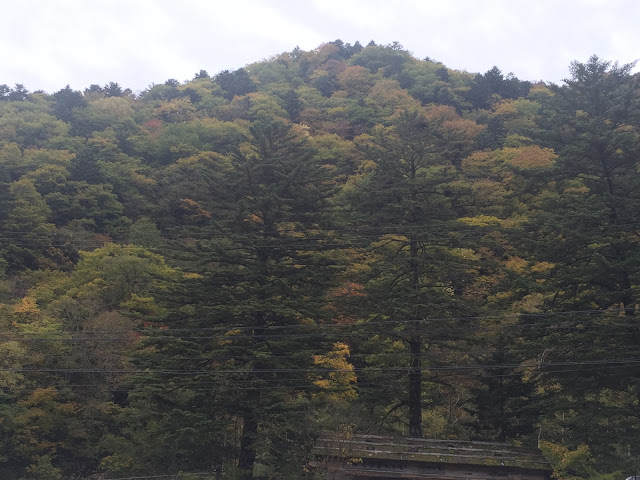 It's not like lying in the middle of nature, like on Day 27, but I won't ever protest at 9 different (and large) rotenburos. Some of them boiling hot and at least one very mildly tempered. So something available for everyone.

Also my room, albeit very simple (no toilet), has a very nice autumn view and also dinner was quite tasty. 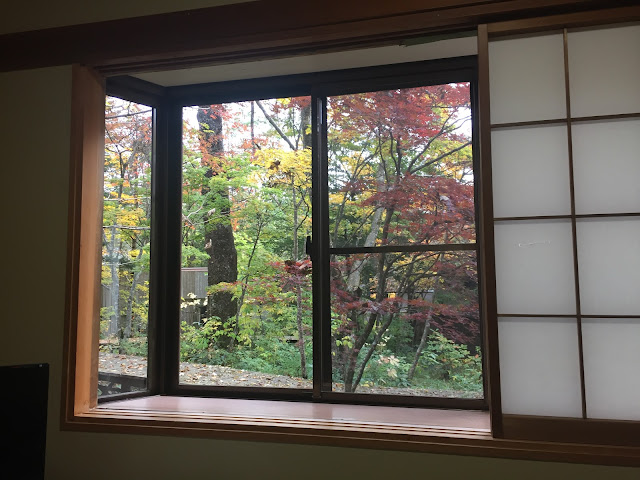 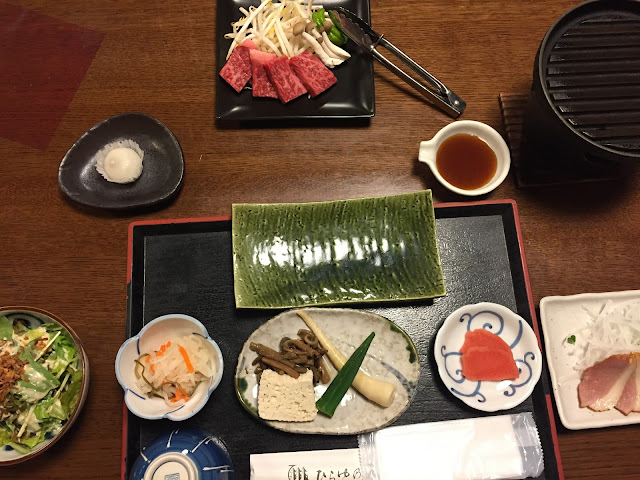 Before dinner I even had time to wash nearly all my cloths, so now I am ready to wait out the latest typhoon ever to hit Japan.

Maybe another soak prior to getting to bed?