Today I didn't need to get up early, as the Ninja Museum was really close to my hotel and only opened at 10:00. (However I suspect that it actually opened at 9:00, as there were already quite a number of people, when I arrived at about 10:10).

I had read somewhere on the internet that this Ninja village is a bit run down... well, I wouldn't say so, but I think it is simply not the perfect place for a solitary adult traveller. It seemed to be great fun for all the families with children, who could experience a lot of "ninja activities", like crossing a pond on two stones: 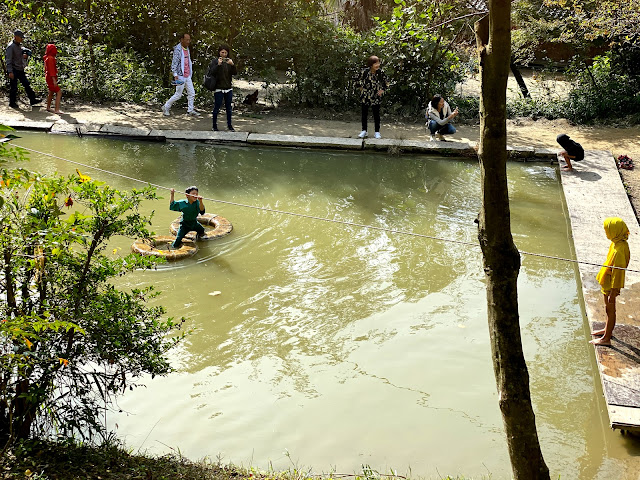 The kids did fall into the water relatively often, but while it aroused a squeal from the onlookers, including the parents, none of the parents seemed to be overly concerned.

Many kids (and a few adults) went around the park dressed as ninja... although I doubt that there were rosa ninjas in the past.

For us adults there was less to do. There was a small museum, all in Japanese and a ninja house, with a guided tour through the different traps and escape routes, like this one below the hearth: 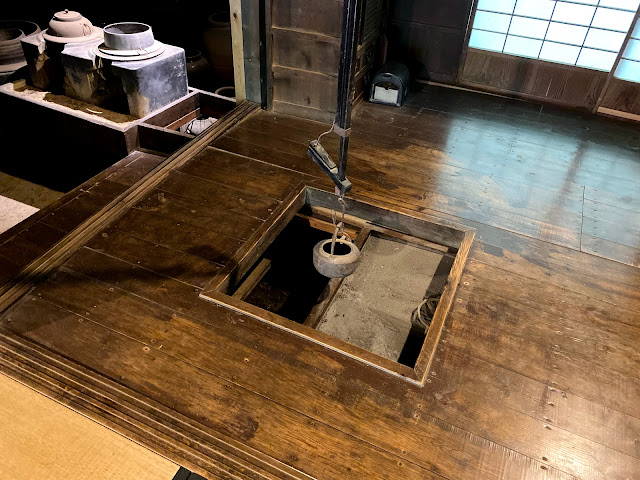 Again today's tour was planned using komoot. Generally komoot selected very nice small country roads, however twice, they brought me to a dead end or near deadend. Once it was really a dead end, but fortunately it was still very close to the bigger road from where I had turned so I could easily ride back the few hundered meters. The other time I was already in this nice very, very rural landscape, when the road first became unpaved (but still cyclable) and then there was a gate on the road. It was open though... So after some consideration I did ride through it and was able to continue one. I even came to a small (and short tunnel), which I passed, just to emerge at the back side of the next small village and not to find an other gate. Which was really relieving. 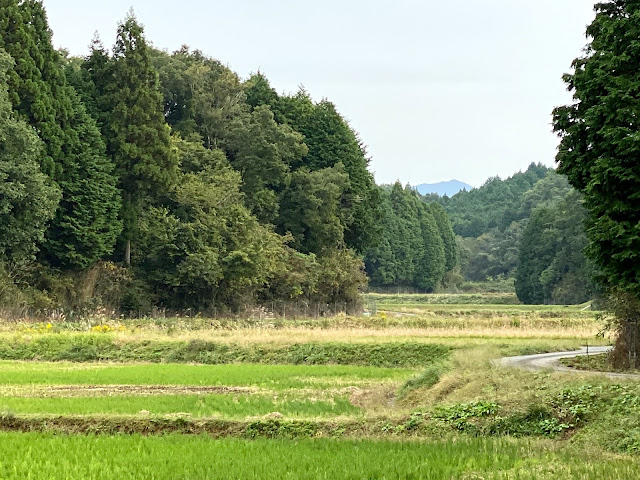 When I planned the route yesterday, I had seen that close to a temple there was a soba restaurant. So that's where I had lunch in an old farmhouse: 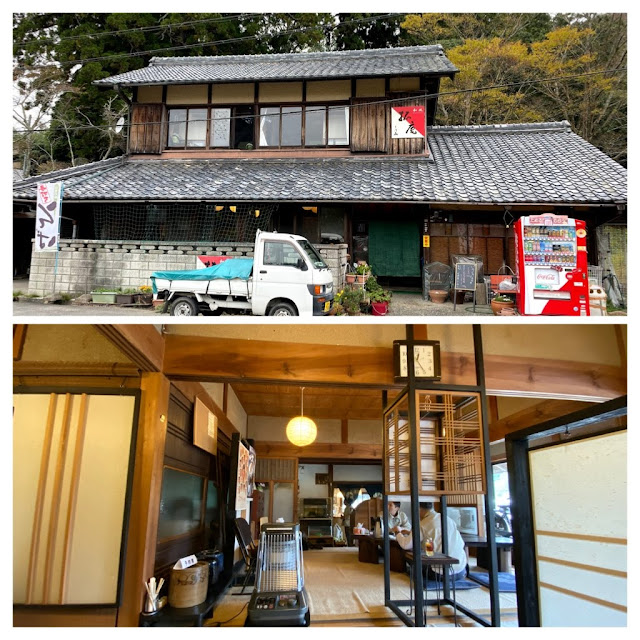 This was about the only place (together with the onsen, see below) to have lunch today on my ride through the countryside between Shiga and Mie prefecture. It is simply a very rural area, with only a few small villages. Too small to house anything like a restaurant. 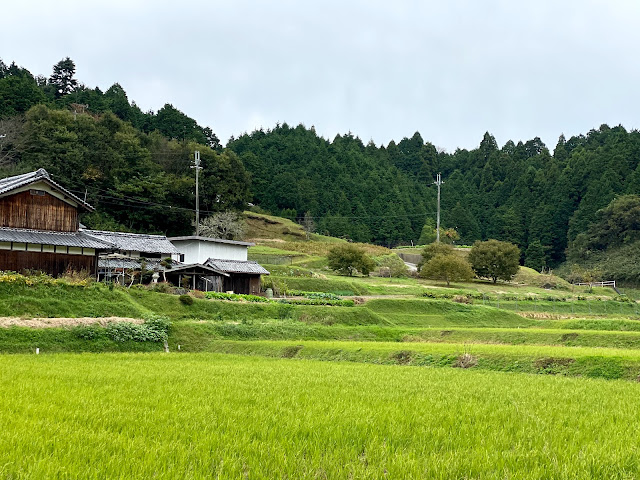 At a certain point I came by these nicely manured trees, which were "guarded" by a group of elderly men resting before getting up to play an other round of something golf like. I really only wanted to take a picture of the nicely formed trees, but the elderly men were convinced that I was interested in some of their kaki fruits. So now I have 5 fresh kaki picked from a tree. (Note that fruit picking somehow is very popular among tourists - Asian tourists? - to Japan). I remember picking strawberries as a child occasionally... and frankly buying fresh ones picked by someone else and just eating them is more enjoyable for me.

My second goal of the day was an onsen I had found on the map. I wouldn't have chosen an onsen midway through the ride, but the pictures just looked too good. http://www.moku-moku.com/farm/onsen.html and yes, it was a very nice onsen. With 3 pools outside, one with quite lukewarm (well, for Japanese standards), greenish onsen water, and other one much warmer (but not too hot) that had apples swimming in it (which gave a very nice smell) and a third one at approximately the same temperature, but without apples or anything else. And all this in very nice nature. 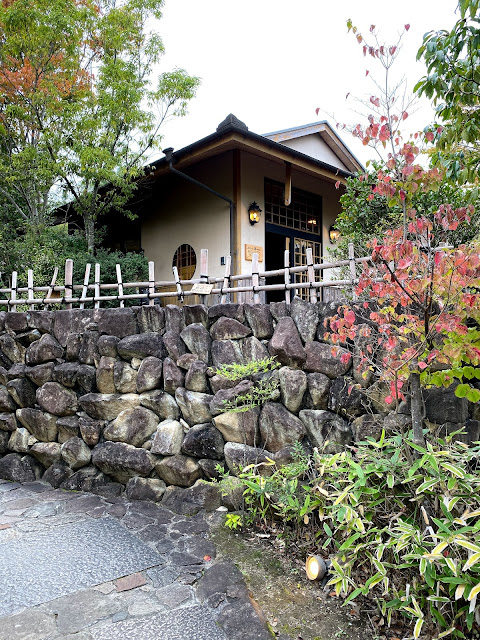 Actually I was very much surprised by the amount of people going towards this onsen. There were 3 big parking lots, and surprisingly there were a lot of people on their way (or back from) it. Even several busses passed me on the last km to the onsen. However, it turned out that not everyone wanted to soak. Around the onsen, there was a big vegetable & fruit shopping market, some food stands and a big BBQ area. In the onsen from a co-bather I learned that in the BBQ area one can make ones own sausages and then grill them. Making them starting from the ingredients and filling them into the casing. Sounds like a lot of fun.

I did relax a lot in the onsen, but I got out of the water soon enough to still get to Iga Ueno in time before sunset. But not soon enough to do any sightseeing today. So tomorrow castle and more Ninja activities (museum?) in Iga Ueno before riding then down towards Nara (or maybe Kizu, which is in the same direction) and then at some point in a train back to Osaka for an other (short) week of work. 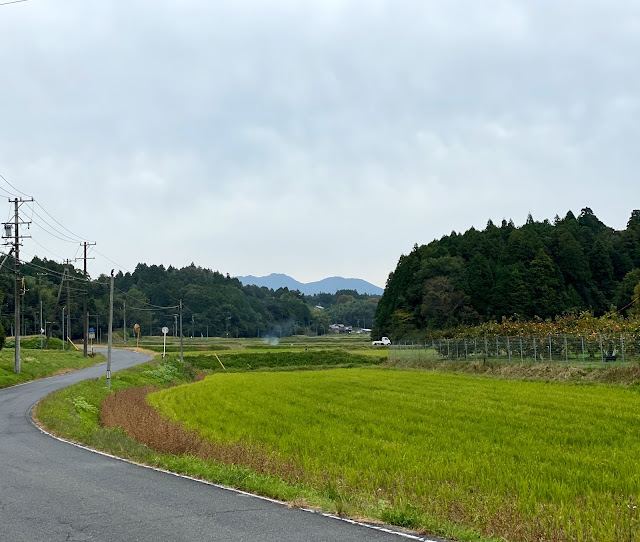 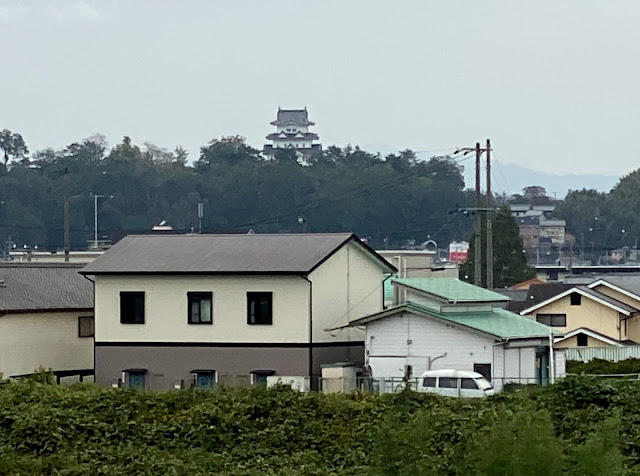 Although I had already taken a bath today, I went to a sento in the evening. The official excuse was obviously that I had poured some more sweat after the onsen... but the less official one, was that I wanted to see this sento which claims to be like in Showa area. And well, specially from outside and in the looker room it is really an old sento. 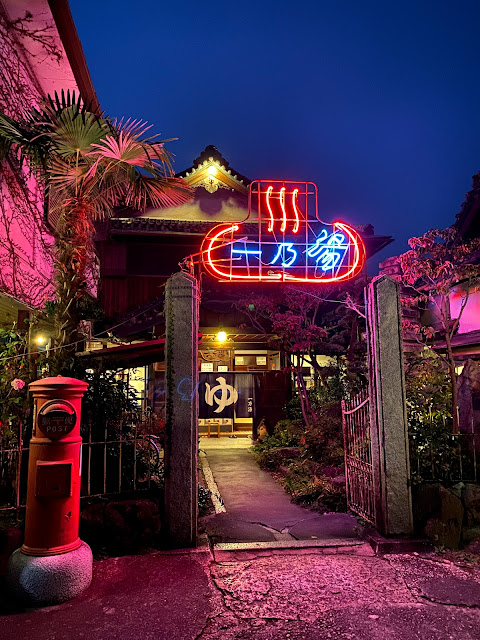 The actual bathing area was reformed some time (maybe in the 1970's or so) and doesn't look very old any more. But still, it was worth a soak.