Weekend... and February... so Ume season (ume = plum), or so I thought. I had seen a bit of Ume flowers already, but thought that it would be a nice topic for a ride through Tokyo. I planned out a route to see actually a number of ume spots, including some around Koishikawa Korakuen, but finally I made it only to two:


At both places actual Ume festivals were in marche, but actually not that many ume flowering. Which was a bit surprising as we had seen the first ume back at end of January in Koishikawa Korakuen (just the yellow ume though) and I had thought that by mid February it should be fuller in bloom, but it was still just a bit too early.

But before heading out to see any ume, I tried to find a a bicycle parking lot for my poor brompton while I am not in Japan. I tried in one very close to Shinbashi, which is an automatic subterraneous parking lot, but the attending guards told me that my wheels were too small for their system. Then I tried a public bicycle garage at Hamamatsucho, but there is a application period, which only opens for a few days at the end of each month, and I was there too early. So finally I did what I had intended anyway, I just left my brompton with its cover under my desk in Tokyo office before departing back to Europe.

Heading out of the hotel, I had a perfect bicycle lane... but only for a few hundred meters: 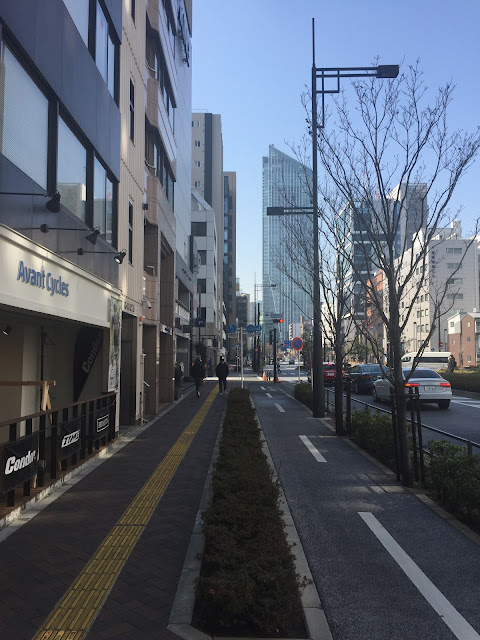 The shop on the left, is actually also a brompton shop, so next time I have any brompton incidence, I will go directly there. How convenient!

My first Ume spot was Shiba Koen, a place where I have been often with the friends from NPC (but always at night). A small Ume festival was in full swing, including a tea ceremony organized by the local council (which I did not attend to), but well, more photographers than flowers I would say: 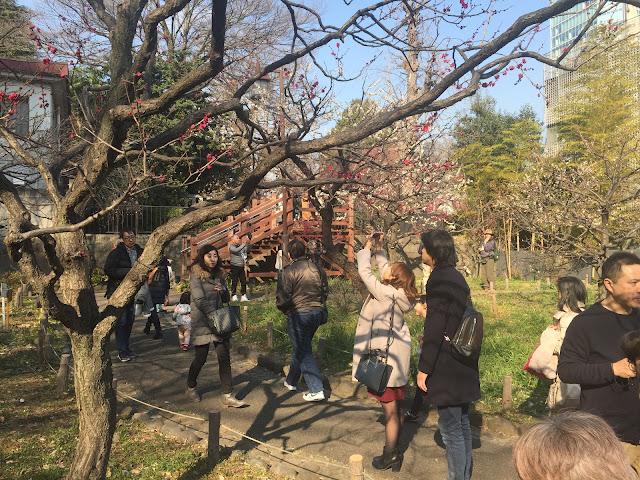 From there I continued along my planned course. I didn't plan it too well, so partially it was along a major street, but that street had on the side walk a bike lane. These aren't very comfortable, as they get invaded by pedestrians, parking bicycles, bus stops etc continuously, but probably still better than riding on the busy road. After a while I decided for smaller slightly less busy roads. And finally arrived at my second destination: Kameido Tenjin shrine, which is known for its Ume flowers (among other flowers blooming in a different period of the year).

Really only one tree was in full bloom, for the others it was still too early. But there was a girl with a monkey to amuse the visitors ... 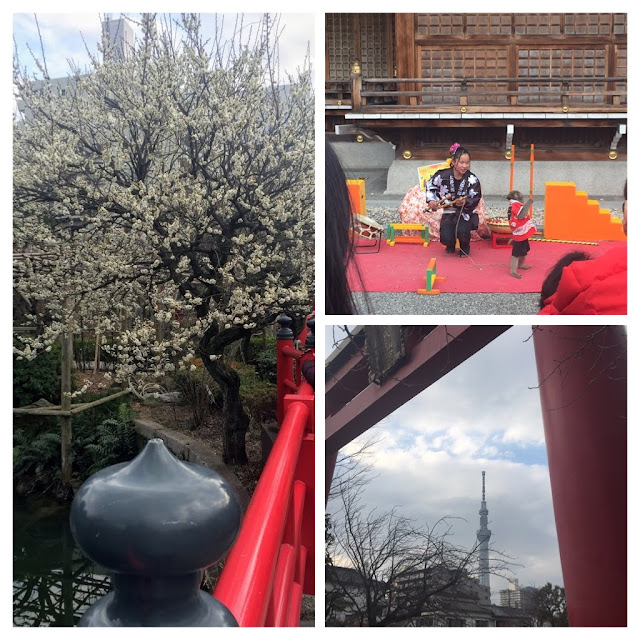 It was getting late, so I had to drop all other destinations and ride directly to Shibuya to my appointment with the friends from NPC. However I hadn't planned a direct route back from Koto-ku to Shibuya-ku at all... So with the help of google maps and some general understanding of Tokyo I found my way... but as you can see the palace somehow came in the middle and I definitely added some extra km there.

Actually I was quite surprised that this afternoon ride just around Tokyo became a 30 km ride, but here it is: