This weekend it was agin time for the monthly ride with the NPC team. As I had started a ride before to the Odaiba and Tokyo Olympics area... and forgot to reset the garmin device, the route below actually starts a bit earlier... but that description is in the previous blog post.

We did meet as always in Shibuya in front of the United Nations University. Similar to last month and even the month before, there were quite a lot (10 or more) people that registered through the Meet-up announcement, but this was the first time that also a lot of them actually turned up. I think about 10 from meet-up, so actually there were more Meet-up people (or at least that's how it felt) than "traditional" participants. I was having some mixed feelings about, as I also don't think it is fair if this ride looses it's traditions, but the organizers seemed to be very happy about the crowd and I think also most (all?) participants of the ride where happy with how it went. Very social (and slow as always). 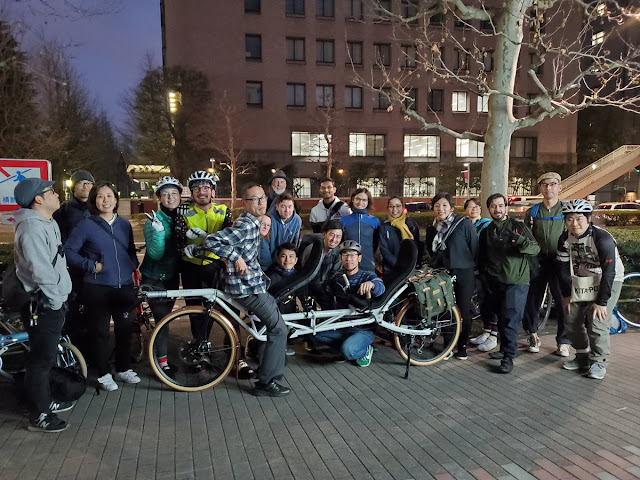 It is also true that by coincidence this time a few of the regular participants could not make it, so maybe in a future ride the balance will shift again in favour of the traditional participants.

And while we didn't have a single tall-bike today, we did have a definitely eye-catching bicycle. A recumbent tandem! Everyone was totally intrigued by it. And we arranged the recumbent, the cargo bike and two bromptons in ascending order for a picture. 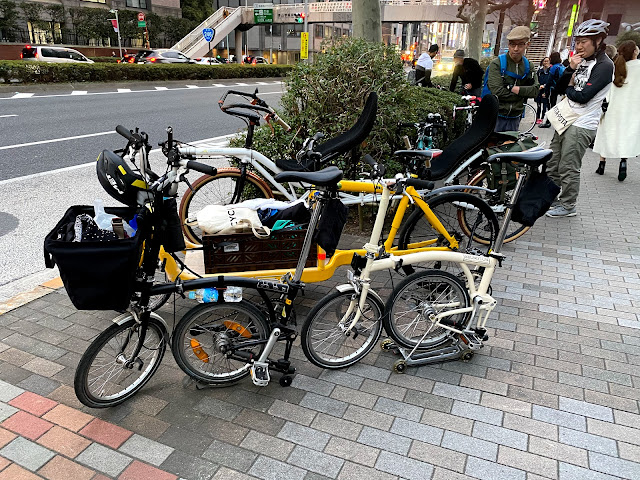 The route of the ride was pretty similar to the previous onsen rides... understandable, as we wanted to soak in the same onsen/sento as always.

It was nice to talk with so many different people while riding through the night of Tokyo. I even met the guy who is going to organize a week-end out at Kawazu for an early hanami at end of February to which I signed up. But more on that at the end of this month... hoping that the ride will go ahead.

Even into the onsen a number of the foreigners came along (and some of the Japanese new attendees as well). It was as always a nice soak and afterwards Chinese dinner. Same procedure as last year ;-)

Recently a producer from GCN had contacted me through Meet-up regarding the riding scene in Tokyo, so we discussed also this and agreed to organize an extraordinary ride on 18th of April with them... Let's see if this is going to go ahead as planned.