After a relatively hot day yesterday, today the temperature had dropped, clouds had come in and right by the time I was leaving my hotel it had started to drizzle. Not too bad actually.

So I did set out to my discovery of Tokyo 2020 Olympic games construction sites. A ride inspired by this article on Japan-guide: https://www.japan-guide.com/blog/sam/190710.html

The map on that page isn't too detailed, but actually I was able to find nearly everything. Most of the venues are on Odaiba (or other nearby man-made islands), an area of Tokyo that is actually relatively central, but still very much in development. Do I like Odaiba area? Nope. Somehow Odaiba has made it on the list of touristic places of Tokyo... I still need to discover the attractiveness of that place. For me essentially it is a place with a lot of high rise buildings, all more or less the same, and without any soul. There isn't a single Izakaya, no hair dresser, no shops on the street (yes, there are some shopping centres), but just your normal grocery shop, something, anything... Just big roads, overhead subway line, highways, grey large buildings, enormous museums/shopping centres/TV stations... but no real life.

The houses of the Olympic village are a good example of this:

But also the actual Olympic venues on these islands. I would say that not even one of them had a marginally interesting architecture. But judge for yourself:

One good thing though, a new bridge from Tsukiji out to the islands has been build an all along with a (typically Japanese) cycling lane. So actually now these islands are quite close to the city centre, but they still feel lightyears away. 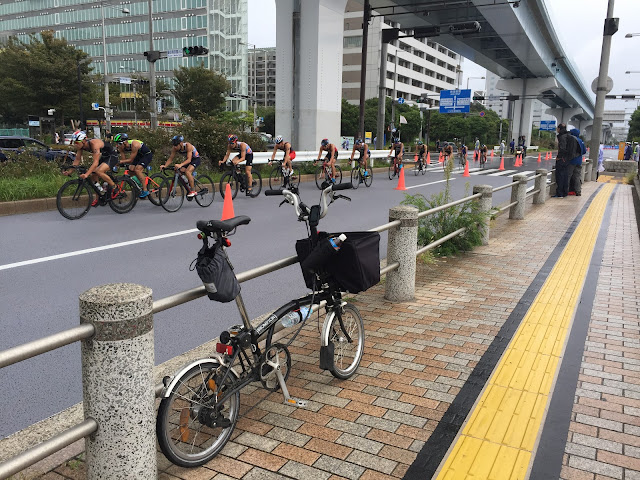 Instead of being able to see the place where the Tokyo Olympics Triathlon will be... I was able to see an actual triathlon. So that was nice. Here where I took this picture, there weren't any fans, but in the area with the fans they were well organized teams of fans. One that even brought a few instructors along that always told the crowd who is the next who is coming that they need to cheer for. They only cheered for a selected number of athletes.  Probably the one sponsored by that bank. )
It was also quite nice to ride (on the side walk) in parallel to these cyclists who would pass me with high speed.

At some point I left them behind and continued in the direction of Chuobohatei island, the farthest of all, where Equestrian, Canoe and Rowing events will be held... but without me, as there is only a tunnel between that island and the last one on Odaiba, which was off limits for cyclists. So this is the closest I got: 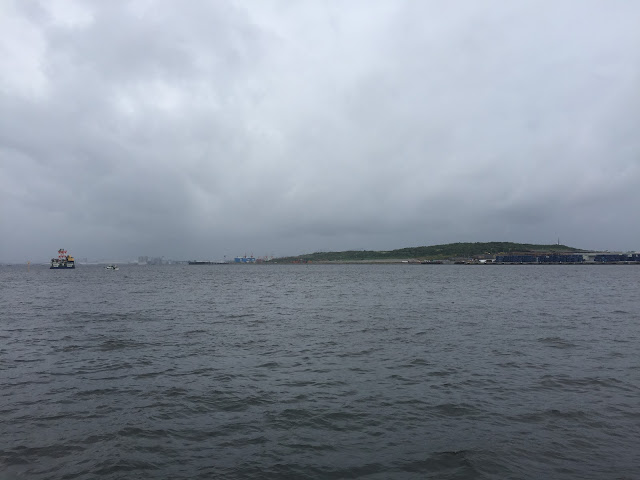 If I understood correctly, there is a bridge from the other end that now might have a cycling lane... but to get there I would have needed to ride through the entire harbour until Wakasu SeaSide park (where we finished some of our August NPC rides in the past) and then hope that the bridge from there is now really allowing cyclists... Well, I hadn't enough curiosity for that.

I road back from there, saw some more Olympic buildings on Odaiba... 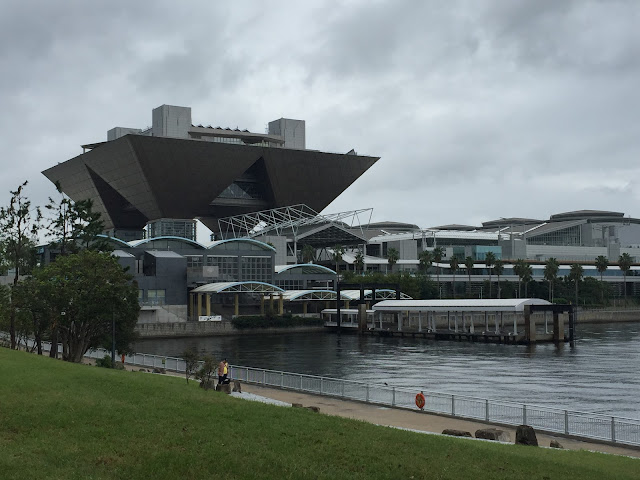 ... and came to Shin Kiba. Where after trying to find my way, navigating these enormous streets, highways, blocked roads etc, I managed to get to Yumenoshima park, which will host the venue for archery. Today only this was visible: 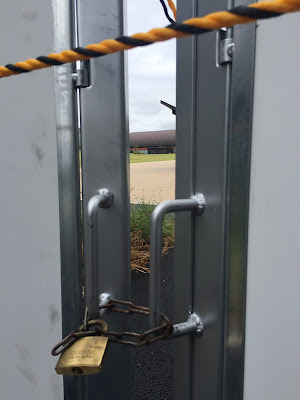 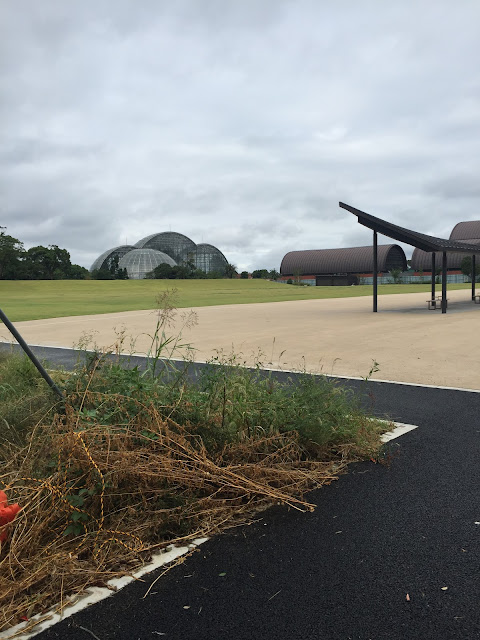 It was also really windy today, and well, being in the bay of Tokyo didn't help, so I wonder if this is really a good place for archery...

At this point I was really hungry, remember there is nearly nothing on Odaiba itself, but luckily I was close to Shin Kiba station, which had a number of Japanese (fast food) restaurants, where I got myself a curry-noodle-soup with rice. Good enough to continue afterwards towards more explorations around Tatsumi. An other island with way too many place dedicated to traffic and transport. After riding around a bit I was finally able to find the arena for waterpolo ... 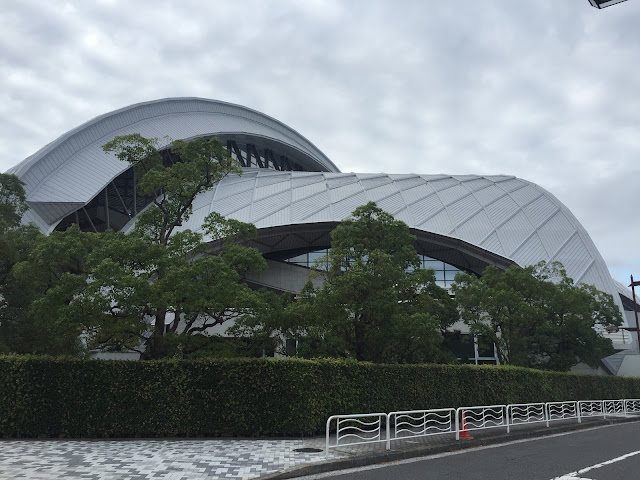 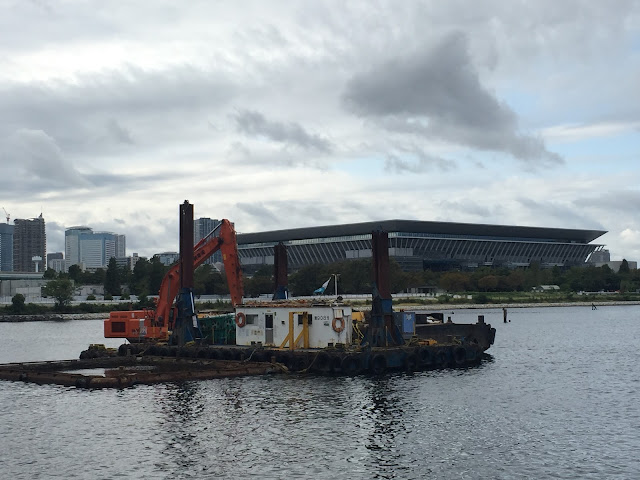 I'd say that the one for waterpolo was the only architectural highlight until here. But does it count? Maybe not really, because it wasn't built for these Olympic games but rather already existed:
https://medium.com/@shotarohondamoore/tokyo-2020-venues-tokyo-tatsumi-international-swimming-center-8951569a2168

This concluded the exploration of the islands, where most of the venues are.
It would also seem that the venues will work. From outside most of them looked already quite close to completion (or they were actually already completed) and two were in "testing mode" today:

Originally I had though to come back to my hotel walking over Rainbow bridge, but as the sky was so grey it didn't seem to be the best day for skyline photos, so evaluating my possibilities I decided to just continue on to a next venue: Ryogoku Kokugikan, the venue not for sumo (not olympic...) but for boxing. 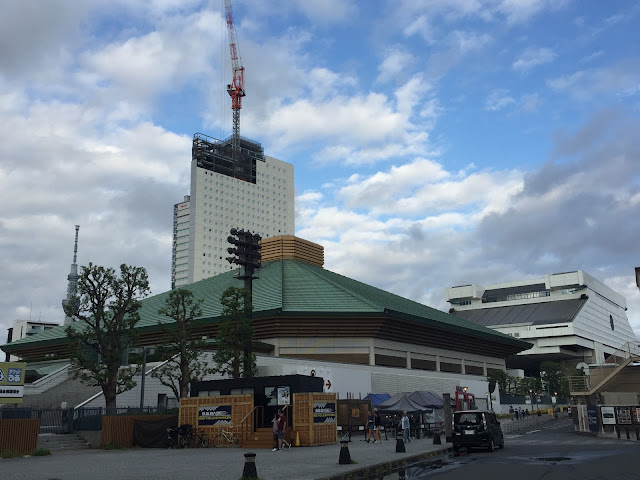 The next decision was again, where to go next... and as I had an appointment with my hairdresser anyway... on the other side of the city, I decided that I could as well pass by the rest of the Olympic installations, mainly the stadium, on my way.

First the Nippon Budokan, the venue for judo and karate, very fittingly: 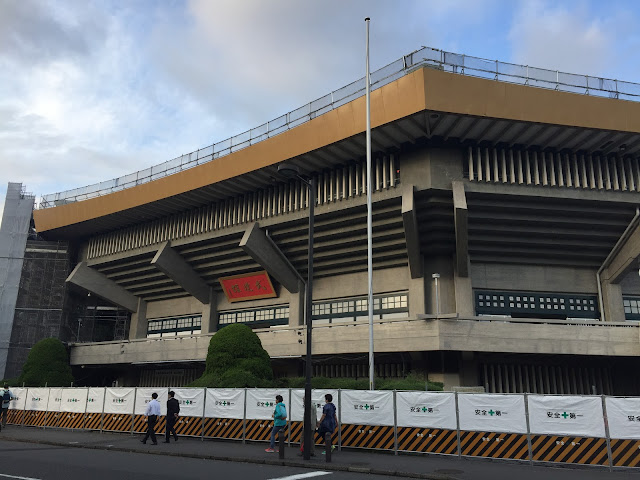 Then the new stadium (athletics & football) under construction: 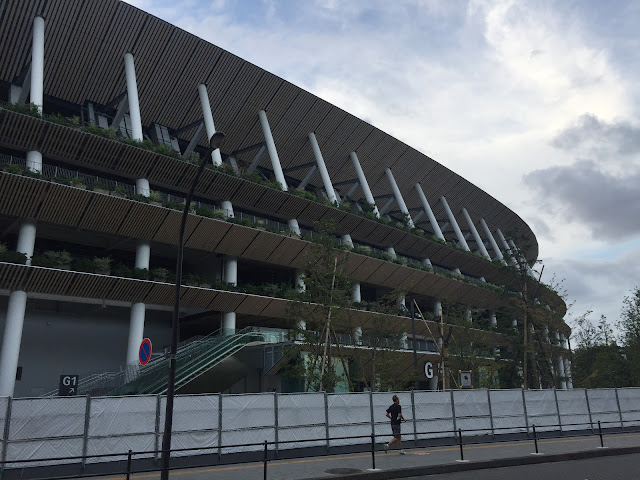 ... and the Metropolitan Gymnasium (table tennis), just by its side (and an already existing building): 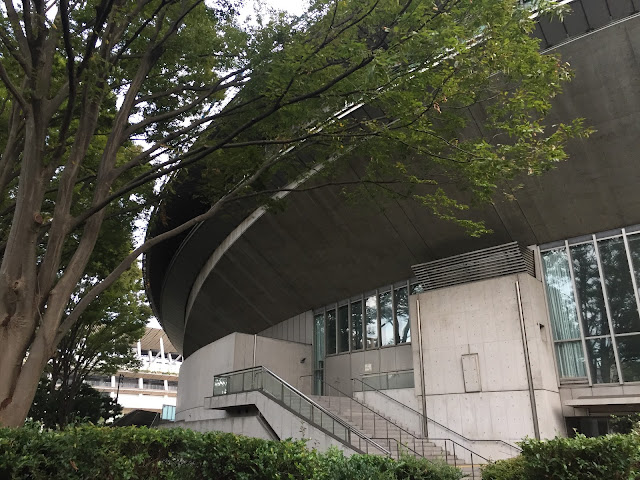 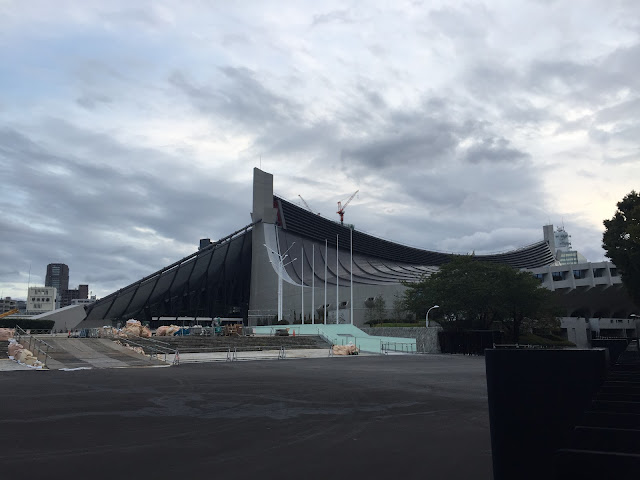 Once upon the time (i.e. at the 1964 Olympic games) it was used for swimming and basketball. And, this one really had some inspiring architecture. Not sure if any of those stadiums on Odaiba will leave a lasting impression on the world of architecture.

From here, it wasn't too far to my hair dresser back in Shimokitazawa. I even did a quick reconnaissance round to our old house: Still there, only the plants in the garden are gone.

After the haircut, some shopping, an electric cable in Shibuya... and groceries in a supermarket close to my hotel in Shinbashi.

Now all set for my first week of work in Japan!