A weekend in Zushi - 逗子で週末を過ごす

This weekend I went to visit friends in Zushi. On Saturday I had a quite slow start, after getting terribly drunk with colleagues the day before, even singing with the bar owner in a bar that was already closed... and missing our last trains home. But I still needed to get up relatively early on Saturday morning as I had decided to go and buy my new iPhone 11 Pro, which is still sitting here on my desk in its box, wrapped. Getting an iPhone isn't just going to an Apple shop and buying it, but queuing for about an hour to make the request and then getting later the same day an appointment to pick it up. Well I succeeded.

Once that was done, I got into the train to Shin-Zushi, actually quite a good connection from Daimon, just one change of trains over the same platform.

My friends picked me up at the station and on Saturday afternoon / evening we went to the beach to have a BBQ. Unfortunately the weather wasn't totally ideal for it, with some rain. Not really strong, but well, some rain, so we couldn't sit on the beach or the blanket. 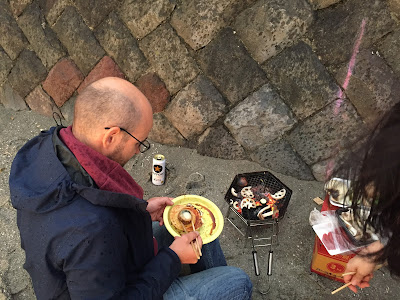 But we got rewarded with a nice sunset through the clouds. Only Fuji-san did not make an appearance. 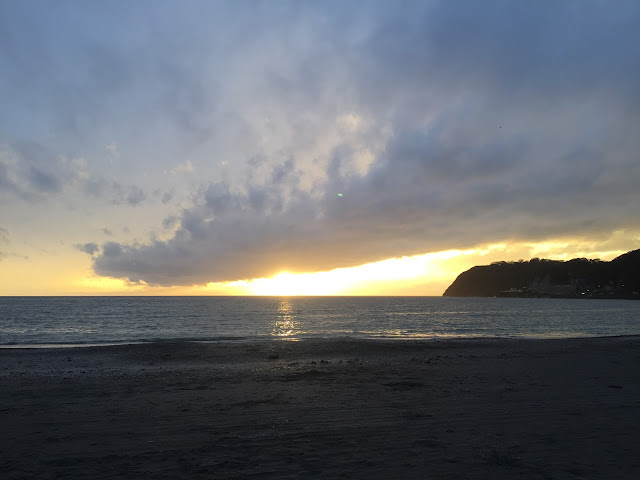 Today we then took their small foldable bicycles, I had left my brompton here as I really didn't want to log it around the entire trip for maybe only a short cycling trip and went over from Zushi towards Kamakura. To a zone of Kamakura that I had visited at least once already by bicycle, but maybe also once with my husband. But there were still new things to discover! Kamakura is really a place of endless discoveries. Even today we saw an entire other area that we didn't even touch, that seems to merit an other day of discoveries. And probably even farer from the tourist masses, although quite close to the centre of Kamakura... but that is going too far ahead... we stayed mainly in the west side of Kamakura.

Our first sightseeing spot was a very nice garden, with a wonderful, natural river flowing through it. A real gem and with momiji it must become even nicer: 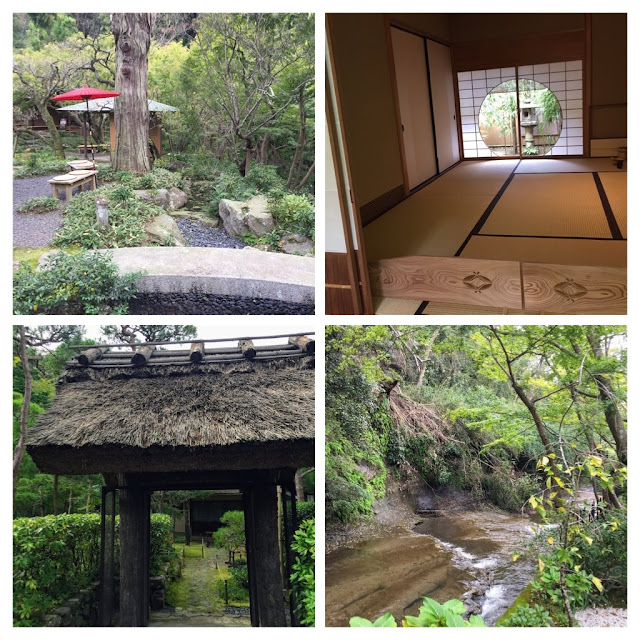 In this park they even do sometimes classes for preparing Japanese sweets and other events.

From there it was only a few meters down the road to Jomyoji temple. A nice temple... but also nothing overwhelming. 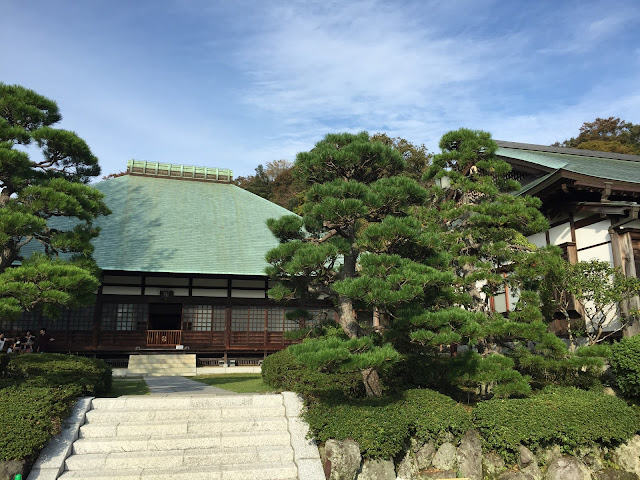 What we did admire where the huge and colourful spiders that had erected everywhere their fabulously elaborated nets. Only, that I hadn't my iPhone Pro 11 with me... and the zoom picture with the iPhone 6 just isn't nice enough. We even saw a colibri at some point today, but taking a picture of those guys is close to impossible, so quickly they move around.

Apart from all the "wildlife", there is also a nice Japanese tea house though from where one can gaze into this rock garden (we looked from outside): 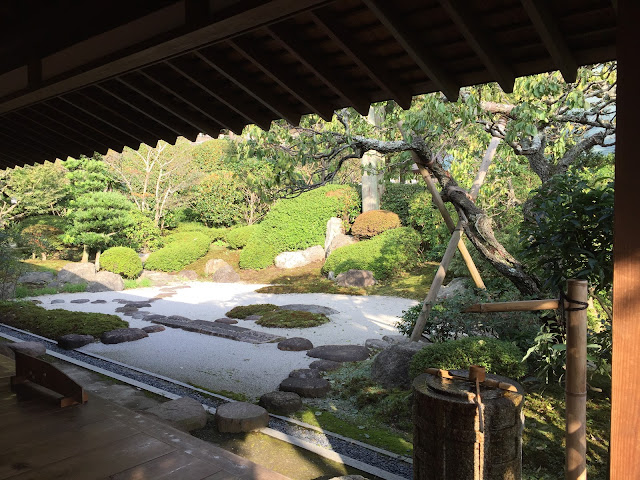 Just over the street there is Hokokuji, yet an other temple, known for it's bamboo garden. I had visited it a few years ago and have a nice memory of it. I think there were even some couples taking their wedding pictures. However today it was clearly very full of tourists. When we arrived there was an entire group following their leader with a flag and other many tourists waited at the bus stop in line to get back to downtown Kamakura. Well, it is a nice temple (judging from my memory and the pictures on their web page... but if you start off the day with just small temples with only a few tourists going somewhere where their are hordes of them, just didn't sound attractive, so we continued on some small streets just a little bit further down the road to the oldest temple in Kamakura, which also it is the starting point of a 33 Kannon pilgrimage route in the wider Kanto area (actually the region is called Bando), it is a temple only visited by a few tourists but relatively (well, relatively) many worshippers. And is really nice. But don't tell anyone! 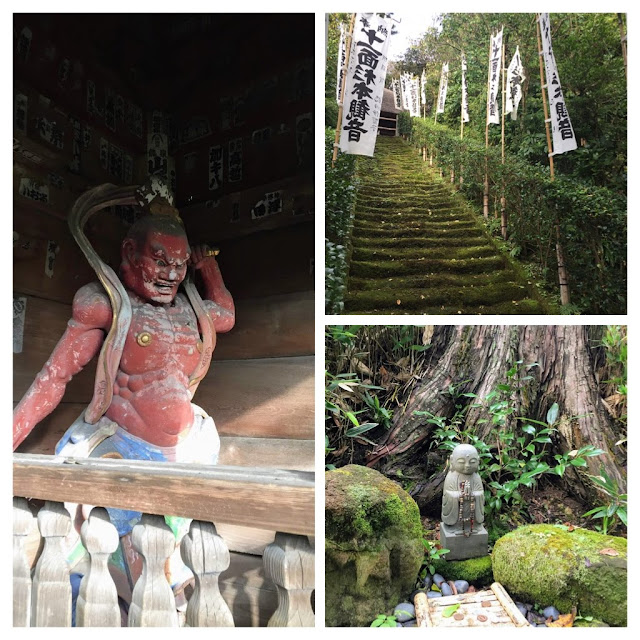 In the same area of the Hokokuji, there is also an other interesting building, a Japanese art deco building. Which today per Google maps was closed... and checking now it's web page, it seems it is only open on 4 days per year, 2 days in spring and two in October... but that October weekend is already over. Although the garden seems to be accessible more or less year around.

From this temple we decided to give it a try at one more temple... and there are more!, so we continued to follow the street towards downtown Kamakura and then turned right again into small streets and at a crossing, where we needed to decide between two temples, both at about 800 m and both at the end of a road, we decided for the one on the right, which was probably the nicest temple of all we visited today: Zuisenji Probably it gets a bit more tourists than some of the others (at least we saw several taxis going or coming from the temple), but when we arrived there were only 30 min left to visit it (which was actually more than enough time), and we got it nearly to ourself.

It must be specially spectacular in February with the ume (plum) blossoms. But also today it did have some flowers: 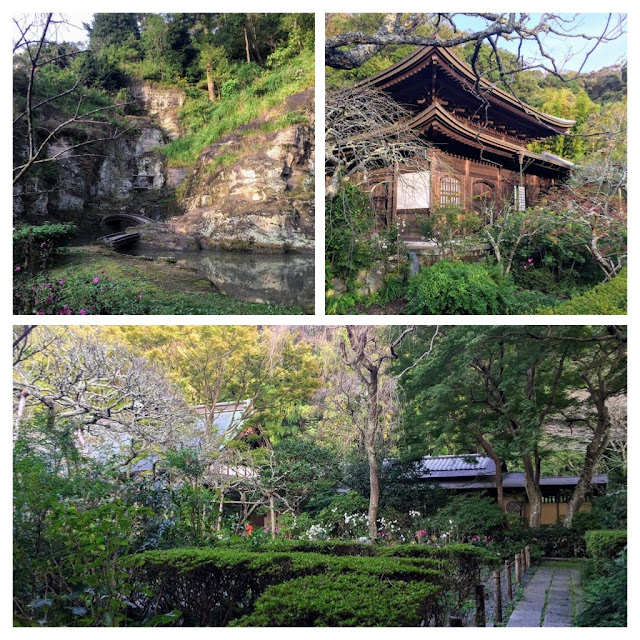 We stayed nearly until closure and then road home (to my friends). When deciding which road to take we took a different from the one we had come, and while the part going into Kamakura and down towards the seaside was fine (actually there seems to be yet another area of Kamakura waiting to be explored), the one going over to Zushi wasn't the best, with some quite huge tunnels for traffic (but we managed to cross them on a foot path.

In the evening, as also yesterday, we went to a strange event/party in the garden of a central shrine in Zushi, where a pop-up bar was grilling and selling drinks, with a DJ and some strange art work, which finally even involved a Japanese belly dancer! 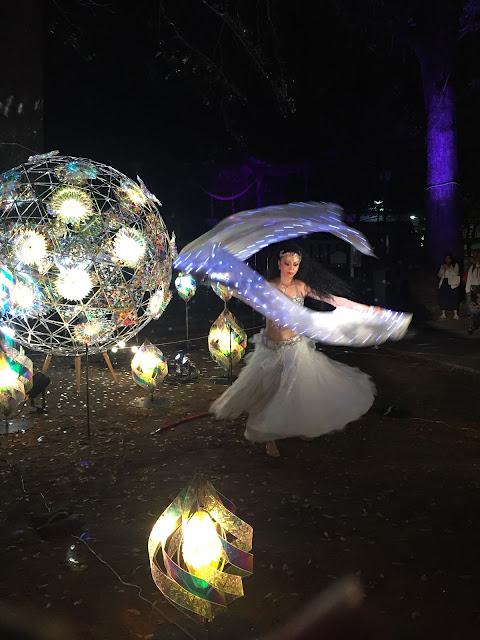