For today the same organizer you had organized the ride to Kawazu 2 weeks ago, had organized a ride from Hashimoto up to a lake and around it. I thought that I had already been to that lake 5 years ago from Fuchinobe... but now looking at the map, it might actually have been Tsukui lake. Which would explain, why neither the way to the lake nor the one back from the lake looked anything similar to what I remembered from that time. So I actually discovered a new place ;-)

We met up at Hashimoto station. All the the others were on racing bikes and some could have gone without any shed of doubt at a much higher speed than me... and rode up all hills instead of stepping off (I think twice maybe) to push up my bicycle...  But still we were able to ride all together. And what I struggled on the ascents they did when it was time to pack up the bicycles. Frankly I had always thought that packing up a racing bicycle was something of max 5 min, pop out the front wheel, put bicycle in bag, put wheel in bag and go... but no. One even needed to remove his pedals for the bike to fit in the bag. 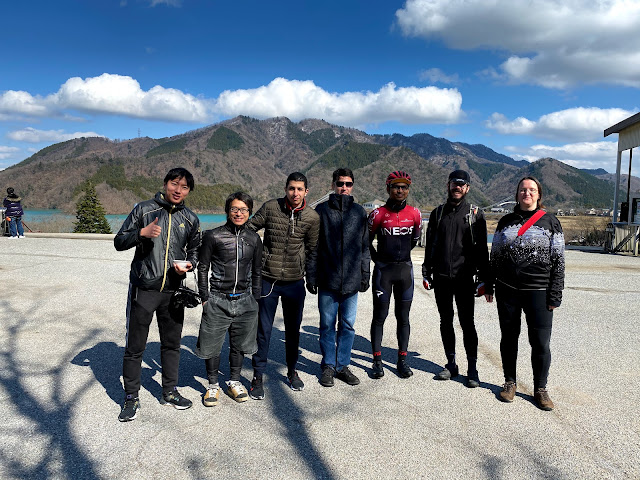 The way up to the lake was with quite a bit of up and down... which well, I don't like... but on the other hand, I can now see a benefit in up and down... one gets to relax on the down and then restart again on the next up. While the way back was one long a gentle downhill. Actually a very nice ride down, inclination-wise.

The lake itself was of a very peculiar shade of turquoise: 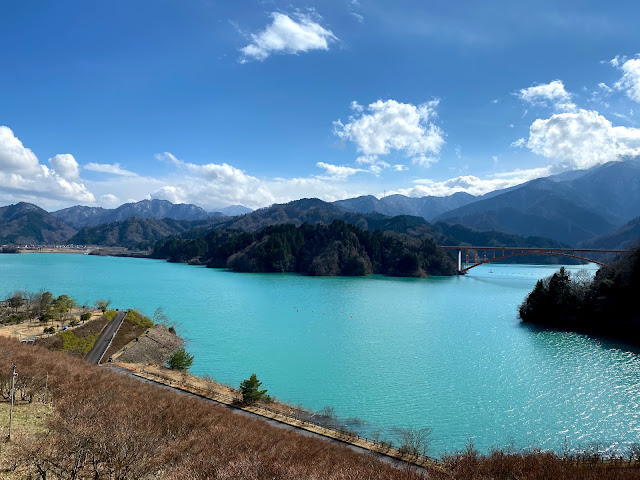 And here again with brompton on the foreground: As yesterday the weather was really bad, it snowed even a little bit in central Tokyo on some of the mountains around, one could see new snow.

Once we were back at the station in Hashimoto it was only 15:30. I had already decided to go to an onsen afterwards and knew of 2 in Hashimoto... but it was so early... I wanted to get a little bit more riding done and there were two who needed to go to Hachioji anway... and one proposed an onsen there, so we went there.

Your typical large super-sento, with a quite nice outside area and many guests... but still manageable. Afterwards we had dinner in the onsen and then back out into the cold, on the bikes and over a last hill before Hachioji train station. From there I took then a direct train to Tokyo station... unfolded and cycled the last 3 km back to my hotel in Shinbashi.

An other enjoyable day out and about on my bicycle.