Today I got up early to catch a Hikari shinkansen from Tokyo station to Maibara at 8:33. I had already sent my luggage to my new monthly apartment in Osaka yesterday (to be delivered tomorrow Monday) and was left only with my faithful (and dirty) brompton and the T-bag with two computers (work and private) and some cloths in it. With that I set out in the morning through relatively quiet Tokyo streets to Tokyo station. I had not reserved a seat before hand, but was still able to reserve when I arrived at the station and as I was first in line, it was no problem to find a "parking" space for my bike behind the last row of seats... From next May however this will need a reservation.

I arrived in Maibara around 10:45 and started on the wrong side of the train station... but that showed me that there is a rental bicycle shop right in the station, which I hadn't known of the last time I was in Maibara. Actually a good part of the ride today was the same as Day 38 of my 2 months tour through Japan. However, this time I did NOT go to Hikone castle and when last time I turned inland, I stayed on the shore just a little bit longer and approached Omi Hachiman, where I had finished also back then my day from an other side.

I did however pass again by this tree on the lake shore:

Last time I was there on a normal weekday... so there were not a lot of people. But this time the tree and the view from it, but actually more the picture spot was very popular. Specially with motorcyclists. 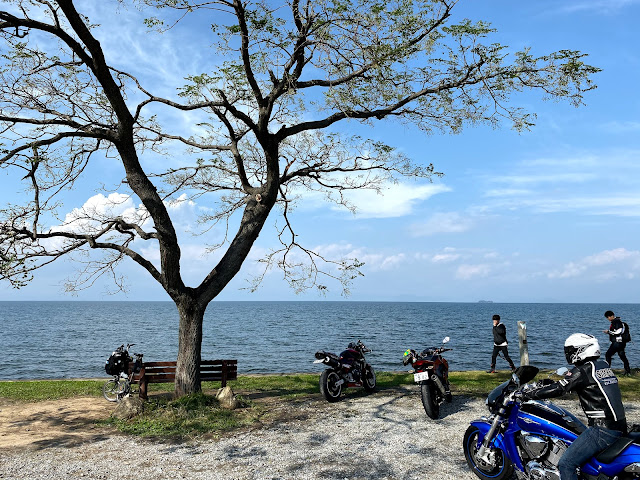 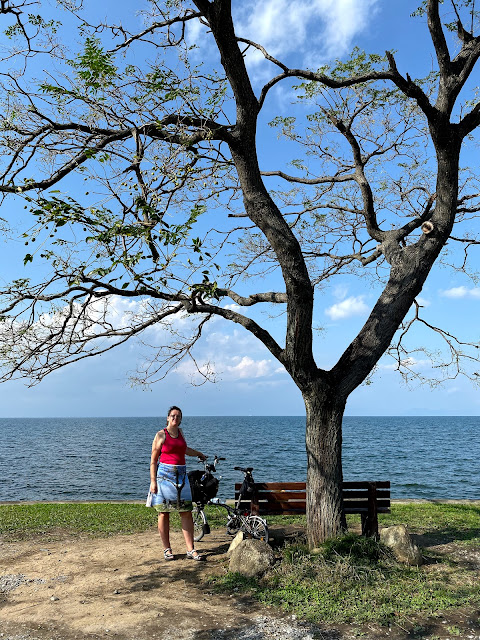 After resting here a bit I continued my way along the lake. There is a cycling route, not really a cycling road though around the lake which is indicated by blue signs on the road: 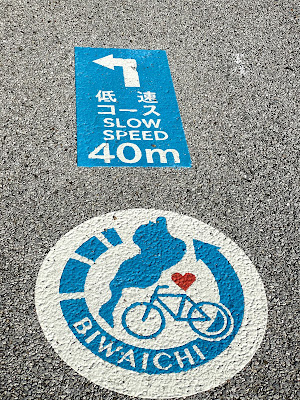 Strangely enough the assumption is that everyone is riding around the lake in counter clockwise manner. I didn't, and it was definitely the better direction for today, which I found out when I turned around for a little bit to get to a conbini I had passed, and was faced with relatively strong headwinds (nothing to compare to the Netherlands, but still).

Along the way there were nice landscapes... 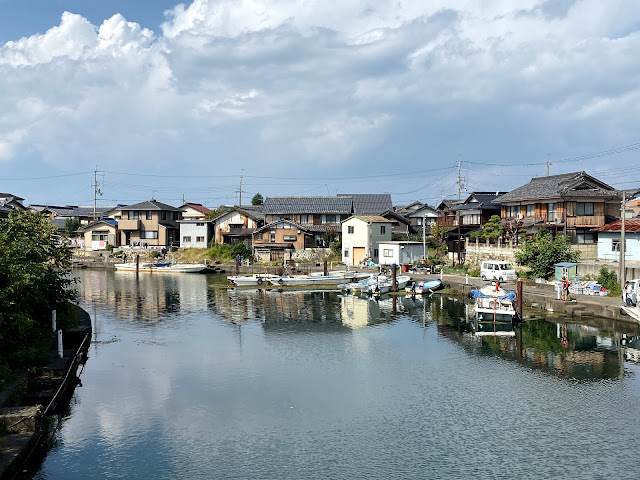 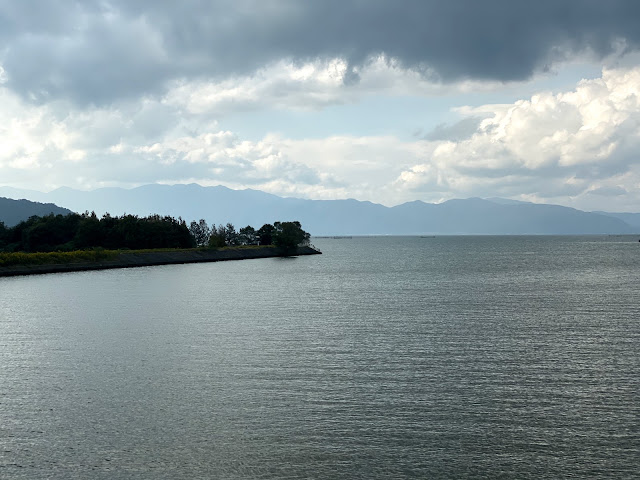 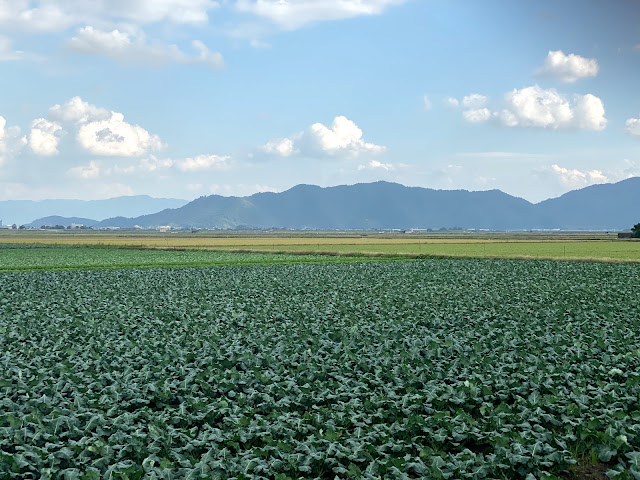 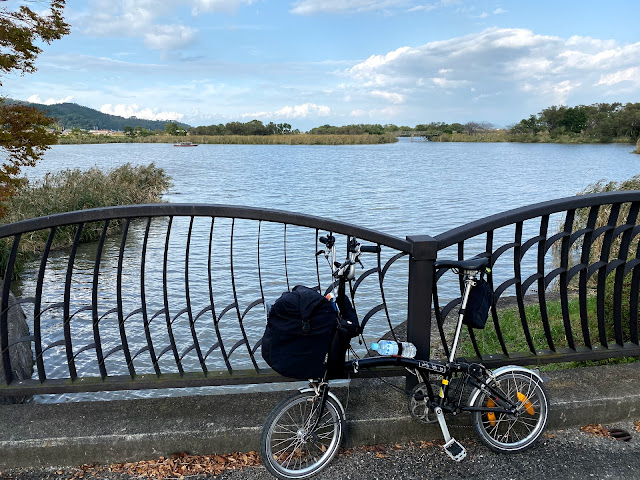 ... however also for some stretches the cycling path follows a street with quite some traffic (but one can cycle on a type of side walk).

In Omi Hachiman last time I had not really seen a lot from the old city. I guess I wasn't really aware that it existed. I had visited however a temple on the lake shore. So this time my goal was the old city quarters of Omi Hachiman. Frankly I am not really sure if I made it to them this time either, as at some point I turned into a small street and found some art exhibitions in old houses and some nice elderly ladies in one of them, who persuaded me to get a ticket and see their art exhibitions.

All the exhibition spaces were in old village houses, which was nice to see them from inside. The art itself was not terribly interesting to me, except some small sculptures carved out of wood by blink artist. One could touch them all, and some where in "black boxes" for one to guess what the form is. I only came close with one form, which I took for a horse or cow, but it turned out to be a giraffe. A fat one though. 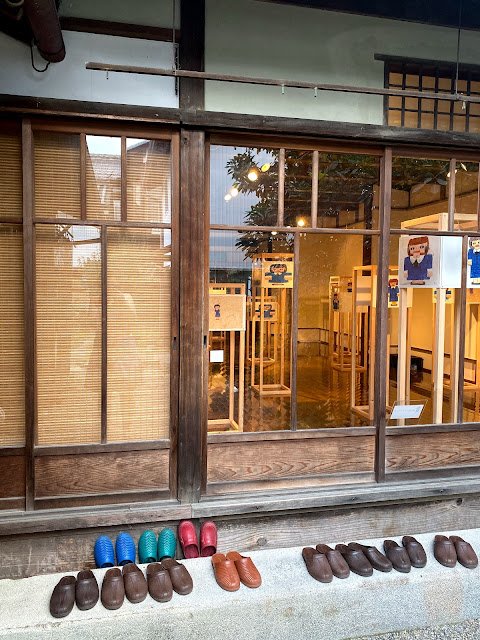 Btw, the slippers were not art... but probably the image that I liked most in this exhibition. 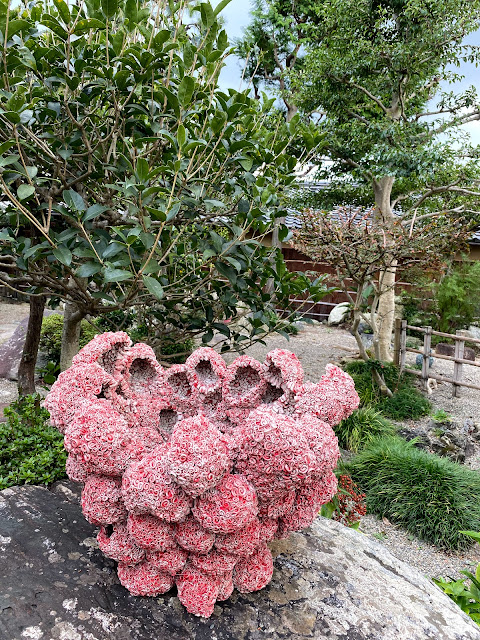 A strange structure in this nice garden... in which I actually walked into a private gathering of people in kimono... which did result to not be part of the exhibition (who knows... could have been a performance). 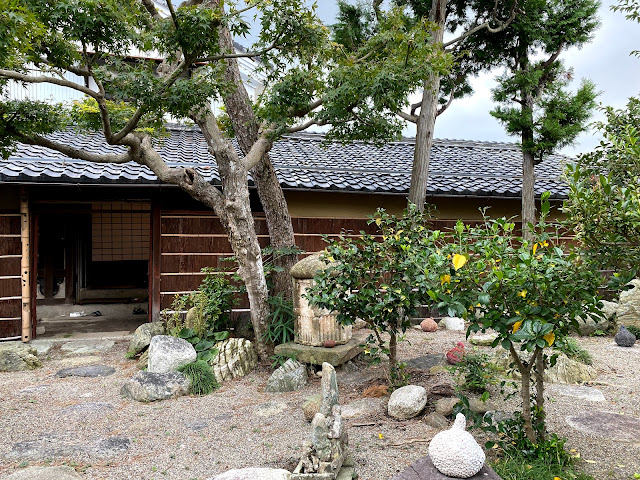 And the view from one of the exhibition houses over the roofs to the famous mountain in Omi Hachiman... Mountain I haven't conquered yet (there is a ropeway...), and with the museum ticket a discount ticket for the rope way was included and I decided to head back to Omi Hachiman the next weekend as well, to finally get on top of that mountain and hopefully also discover where and what the famous part of Omi Hachiman is. I think it involves channels... 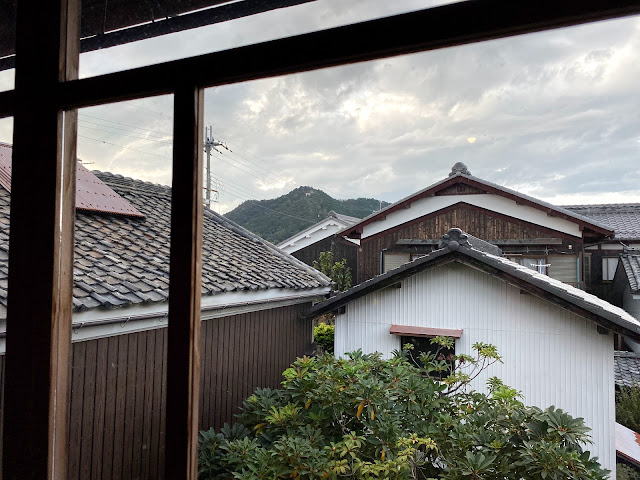 But for today some pictures of the old houses need to suffice... 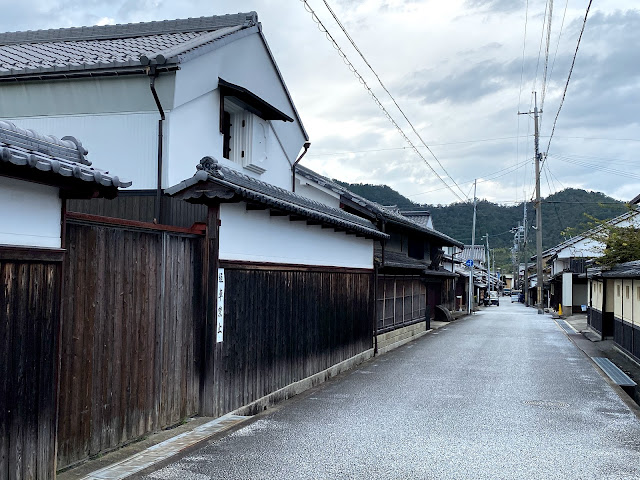 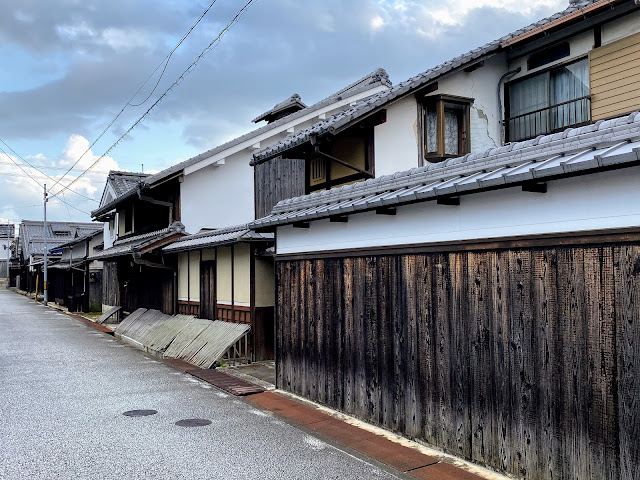 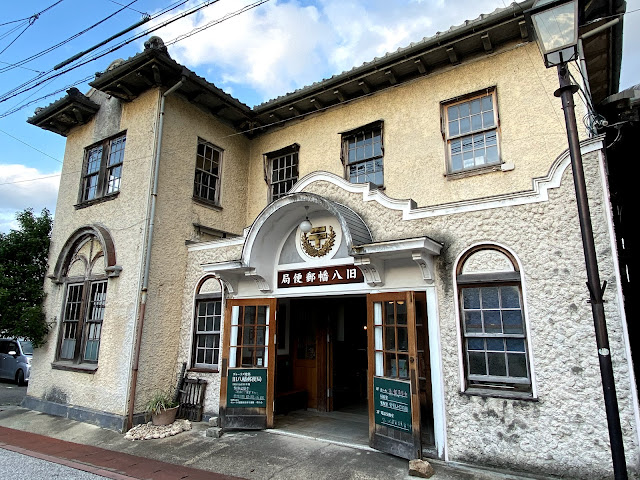 I had comfortably the time to see the exhibitions in the central part of Omi Hachiman before catching a train at around 16:30 to Shin Osaka. I needed to be here at my new monthly apartment before 19:00, just in case I had some problems with the keys... but I had not.

So once I had successfully occupied my apartment, I went to an onsen, Nania wa no yu. A super sento on the 8th floor of a pachinko & parking lot house, which however has a quite large out door part. I have been there already several times before, and always had some mixed feelings. Also today. The outside pools are actually very nice, also because there are some of those lying in the warm water "pools", however there are too many tourists and some of them have no idea about onsening. The very first time I saw a lady trying to get into the onsen with a swimming suit! and her child actually in the bath with a swimming suit... They were quickly convinced that this was not the right way to do it. It must anyway feel strange to be in a swimming suit if everyone else is naked... And an other lady with a tattoo! I think I am slowly but steadily becoming an elderly Japanese lady frowning upon the new customs.

After the search for the bicycles yesterday at the end of the NPC ride, today it was my turn to no longer find my bicycle when it was finally time to head home. I had parked it in a roofed parking lot, which however turned out to be part of the pachinko parlour and not of the onsen. Luckily enough at the onsen they explained me that the pachinko caretaker puts all bicycles parked in their lot when it closes just outside... and there it was. Waiting for me.