For this long weekend (Monday is Culture Day), I have decided to make a loop from Shiga prefecture through Mie to Nara prefecture. More specifically from Omi Hachiman to Koka, Iga-Ueno, and time permitting down to Nara. I planned this route on komoot and it would seem it is working quite well, except one section of the road, which well, wasn't even single track, but was NO track... which wasn't nice as it had cost me quite some energy to get to that dead end (see km 28 - 33) and it was getting dark by then.

Today on Day 1, it was Omi Hachiman (yep, yet again) to Koka. Although I got up early today, and made it for the 9:04 train from Shin Osaka to Omi Hachiman, finally it got dark WAY too early... but well, after some difficulties, see below, I did make it to my (very ugly and dirty) hotel in Koka. But let's start this orderly.

I was in Omi Hachiman already last week and there two elderly ladies talked me into buying the entrance ticket for an art exhibition that is scatter through town. As they had been successful this was also the reason why even on my second visit to Omi Hachiman (after one in 2017) I still hadn't made it to the channel quarters of Omi Hachiman.

So today the third attempt. And finally I made it! I headed straight from the train station to the (very small) area of Omi Hachiman with the channels: 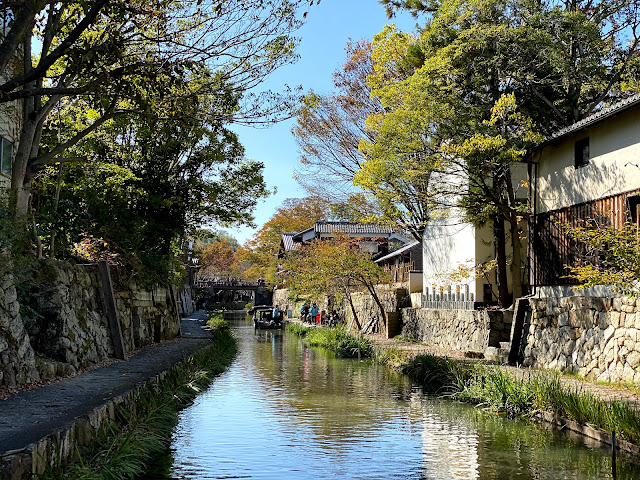 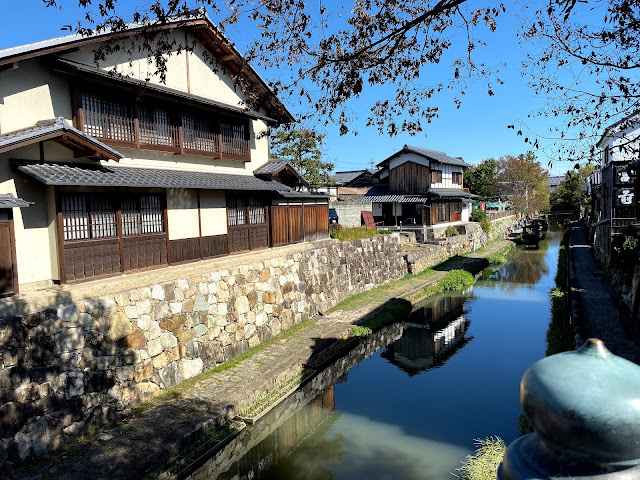 And then up the hill behind it with a rope way to a temple on top (the temple wasn't anything special) but with really nice views over Lake Biwa as well as some smaller lakes in the area. 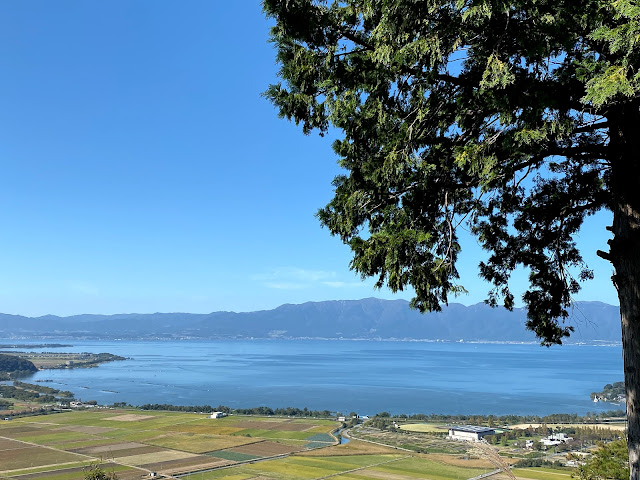 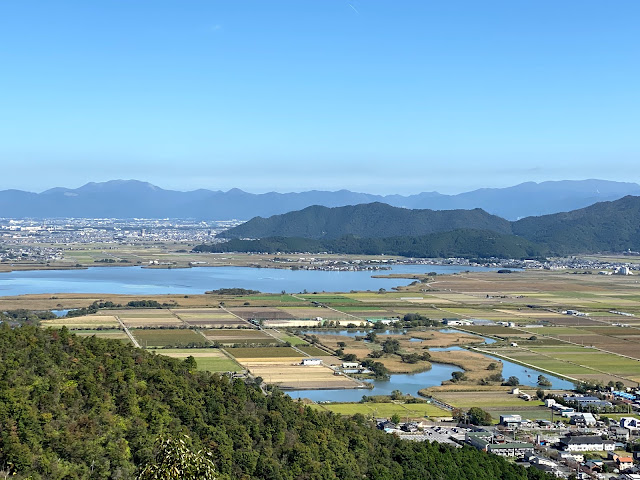 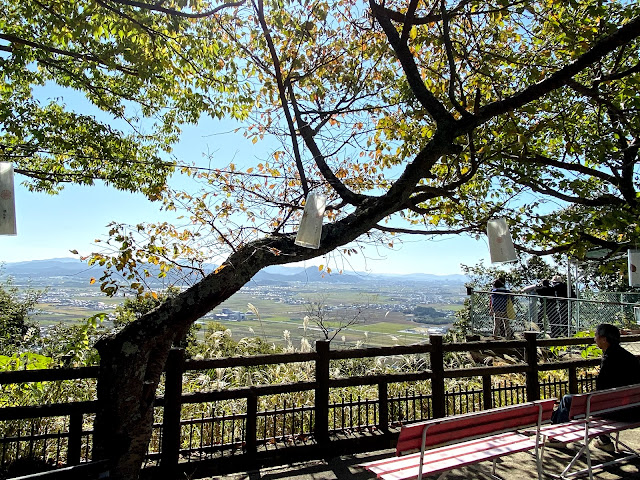 While riding up, I chatted with an elderly Japanese (from nearby Hikone) and later on he insisted to take my picture. Also when I was down the hill again, an other, equally elderly man, this time a kind of local guide, volunteered himself very eagerly to take my picture. Thus Susanne in all different situations. Generally in front of a really nice view. 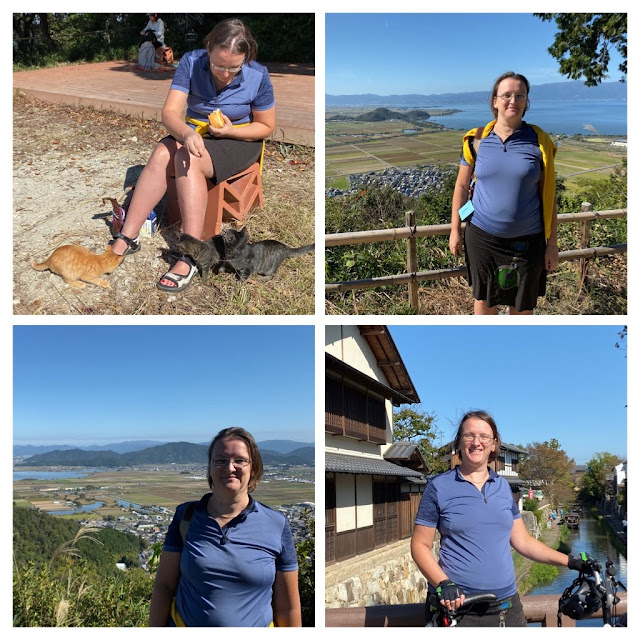 Down again, I rode a little bit into the old town area and found the 5th exhibition spot, which was in a very old Japanese house. The art again was, well, questionable, but the local volunteers who man those museums are all very nice. The one today insisted to speak in English, although he only knew a few words. Replying in Japanese did not deter him. 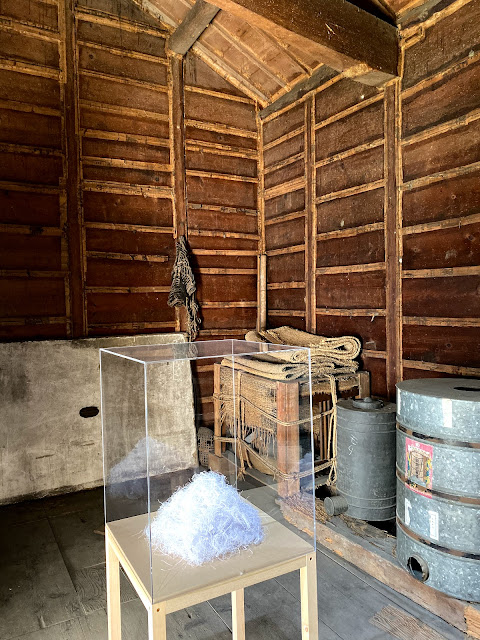 The strange white heap is art (very thinly cut paper), everything around is the stables of the old house. When I was in the exhibition, I didn't make the association, but now looking at the picture, the white heap looks very much like the salt piles (盛り塩）that one can see sometime in front of restaurants.

My next destination was Azuchi castle... or better to say the ruins thereof. I had passed those (and not visited them) already 2 years ago, so today was the day to visit them. They are connected to Omi Hachiman by a nice cycling lane (at least partially). 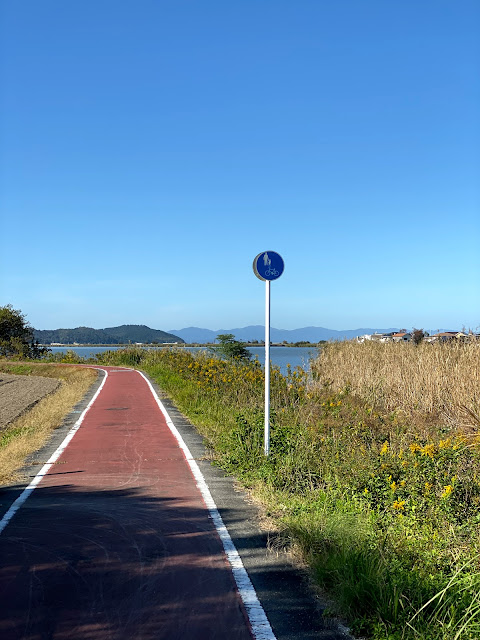 Here a map I found in the middle of nowhere for this cycling lane. However there were also several other ones I came across more inland. Will need to do some more investigations into cycling in Shiga! 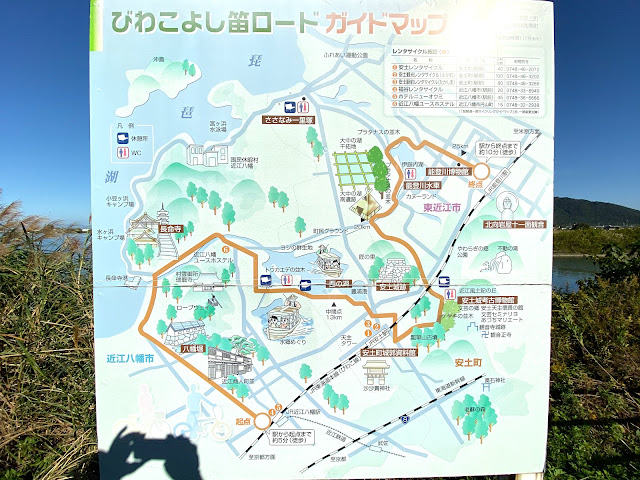 Azuchi castle has only a very short history, from start of construction (1576) to it's destruction (1582). Just 6 years!!! And well, what mainly remains of it, are STAIRS: 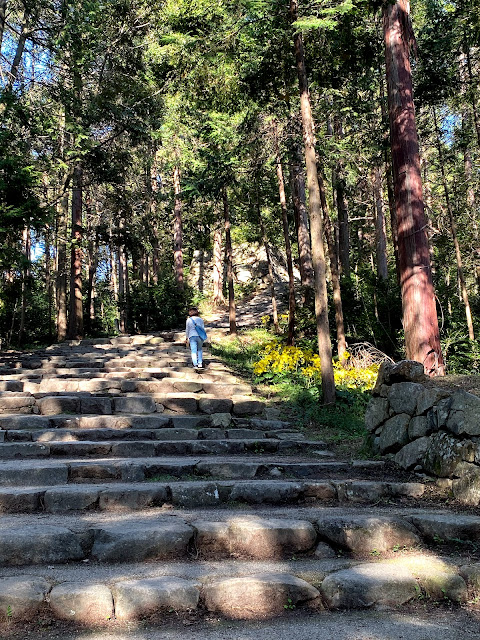 And yet an other nice view over Lake Biwa: 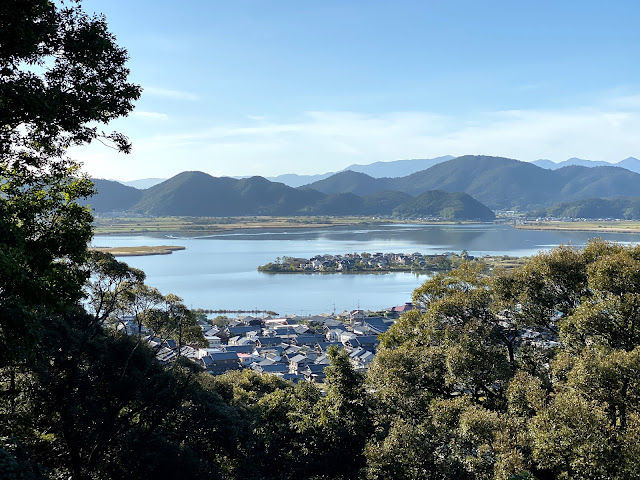 Half way up, I had green tea and a traditional sweet in this nice tea house in a temple... however this was insufficient for my hunger... so once I had finished with the castle, I went to the nearest conbini and got some lunch (and came back to the castle to eat at it's feet). 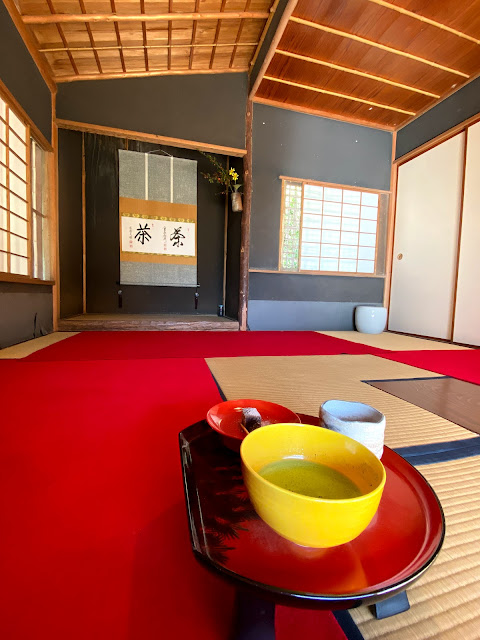 This however left me departing the region at around 16:00... way too late to get while there was still light outside to Koka, which was an other 40 km away...

The ride through the countryside towards Koka was very enjoyable as long as there was light. Nice, small country lanes. Ideal for bicycle riding. 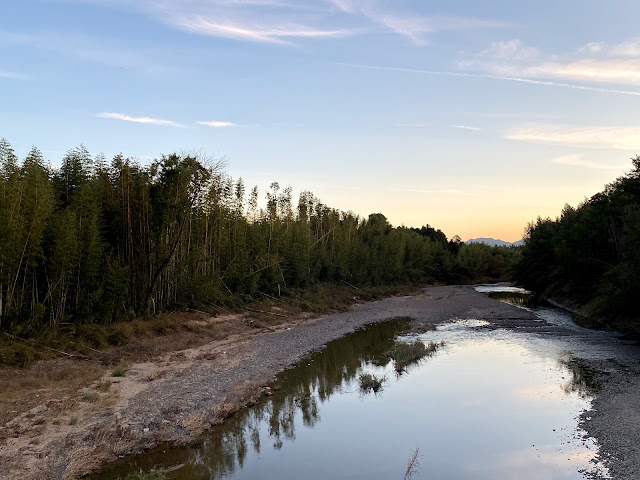 However right when it started to get dark I came to a point, where my plan foresaw continuing on a really small road through the countryside, instead of a much bigger road. I considered my options then... and decided to give the small road a chance. It would have been fine, if the road actually had gone through. About 1 km in, the asphalt gave room to gravel (which was okay)... but 2.5 km in... the path disappeared. Totally. Looking at google maps (satellite view) now, it seems that there isn't any path at all, but komoot has a path there. Not even marked as single track... So well, there wasn't anything else to do as to ride as quickly as possible back to civilization as it was getting darker and darker. Back at the main road, I considered again. Giving up, and riding to the next train station to do a laborious train ride? Or getting on in the dark on a normal road, without any plan on my garmin. I choose to go on, and actually it was okay. It was dark, and in some places I needed to go a bit slow to check the street conditions (as I was mostly riding on a side walk rather than the street, just for added safety), but specially once I was down in the valley of Koka I found a really perfect street. Small through villages, with a bit of traffic (so not feeling completely isolated), but no through traffic. Which brought me nearly until my hotel for the night.

The learning for tomorrow is definitely to get going earlier so to be latest around 16:00 in Iga Ueno. Before it get's dark. Riding in the dark is okay... but just defeats the purpose of getting to know the landscape... But at least, I can come back to Koka once again in the future, to enjoy the landscape, I haven't seen today... and probably is quite nice.

In principle here in Koka there are two Ninja related attractions, but unless I get up very early tomorrow morning, I think I will go only to the Ninja park, which is very close to the hotel (but only opens at 10:00). If I get up earlier, I could go back a bit to a Ninja house, visit that first (or only) and then the ninja park... Let's see tomorrow.