Rokugien and flood of Arakawa


After the typhoon yesterday the weather today was perfect. Sunny, still a bit windy, but not too much (and no comparison to strong wind in the Netherlands), and quite warm, but not hot.

My first objective was Koishikawa Botanical garden, a garden I already tried to visit in the past, but always something came between me and the garden... and today it was yesterdays typhoon. That typhoon had also cancelled a weekend trip to Matsuyama. It was on of the strongest typhoons in the Japan for maybe half a century, and although it seemed to hit Tokyo straight, actually the winds and rain in Tokyo (at least in Shinbashi) were not so strong. Nothing to compare to the typhoon Nr. 21 last year in Osaka, where my entire hotel room was shaking and sounding from the wind.

This time however right in the middle of the typhoon there was even a (small) earthquake. But still it felt pretty safe. So I had an entire day yesterday to plan for today... and came up with the plan to get to see some gardens in Tokyo that I hadn't made it to in the past.

I was much more lucky with Rokugien where I had passed this year in GW briefly after a very nice visit to Shibamata but hadn't had enough time to visit it then. Which was good, because today it was open, the weather was ideal, and this garden is GREAT! I don't know why it gets only 1 star on Japan-guide. It is definitely one of the great Japanese gardens, on not overflown by tourists. It has been built with the idea to represent 88 ideal landscapes from the more of less mythical Wakayama (well, Wakayama exists... but probably not all of these 88 ideal landscapes, which are cited in classical poetry). 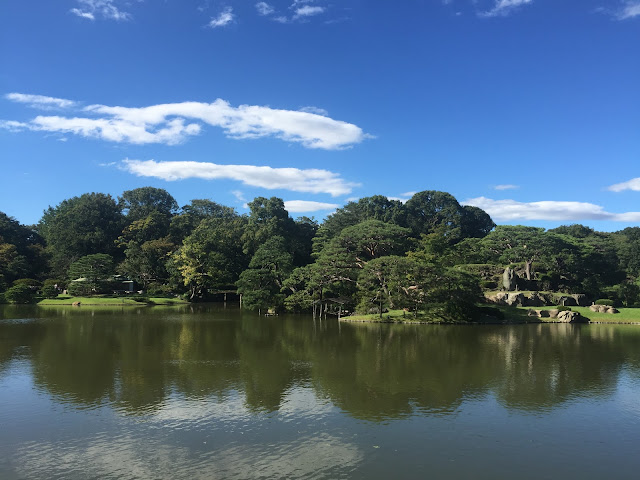 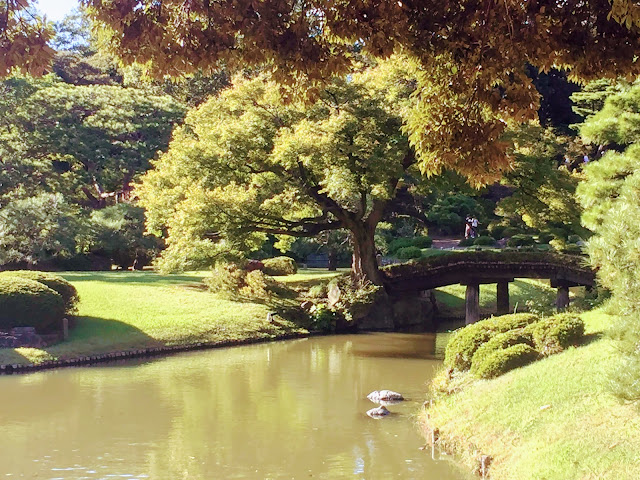 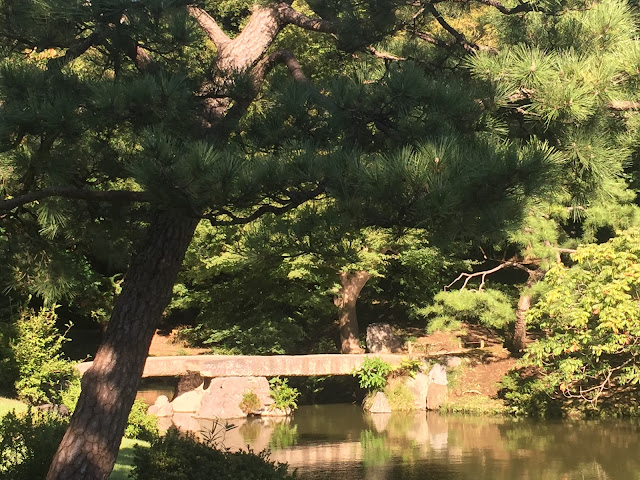 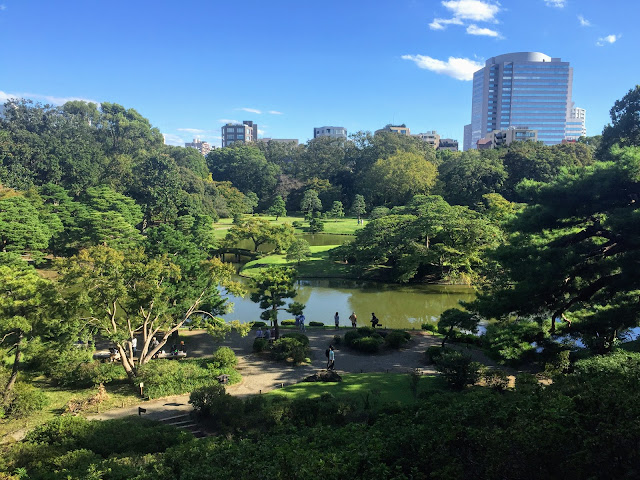 And even my appetite was taken care of by a cold vegetable udon soup with view on the garden: 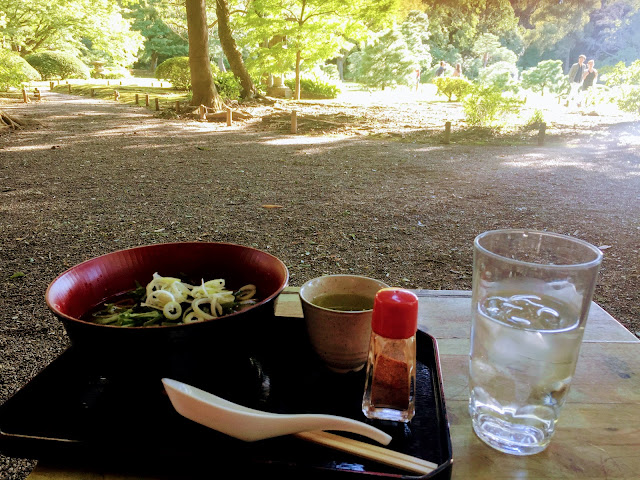 My further route foresaw a visit to an onsen, which however was very close from the garden, and as the botanical garden had been closed... it was still too early (and to warm) for me to go to the onsen. So after passing yet an other - closed - garden: Kyu Furukawa Garden, I continued on towards Sumida and Arakawa rivers for some disaster tourism. On the Japanese news it was quite clear that both rivers had gone over their restrictions, but stayed within their dikes. While on the BBC it sounded like Sumida river had properly overflown... however from the pictures that they were showing it was clear that it "only" had left it's normal riverbed, but was still very well within its dyke.

When I first reached Sumida river, there was actually no sign at all that it may have had high water... but later on I found a part of it that clearly had high water, although it already receded and the river was back in its bed: 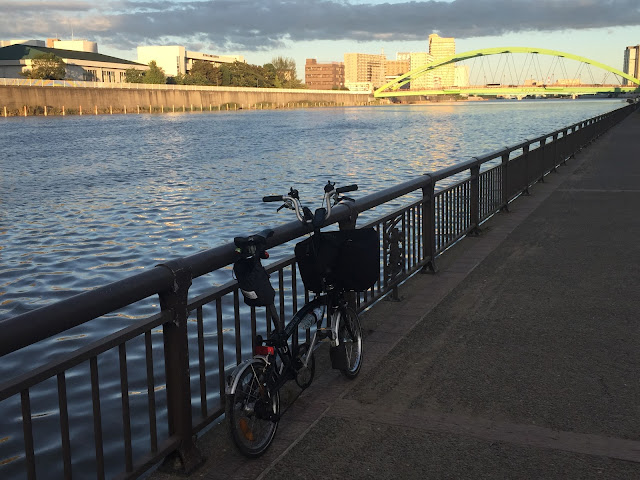 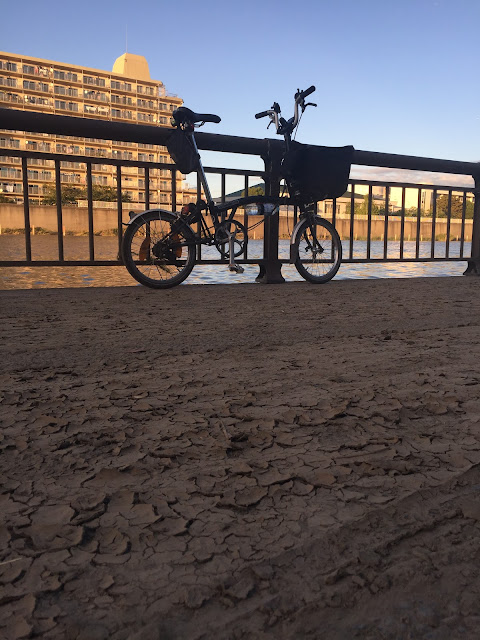 At the section of the river I was, there was also a DIY xylophone with instructions how to play it so that a specific song would emerge. I tried... it sounded nice enough, although I doubt I got the rhythm right. 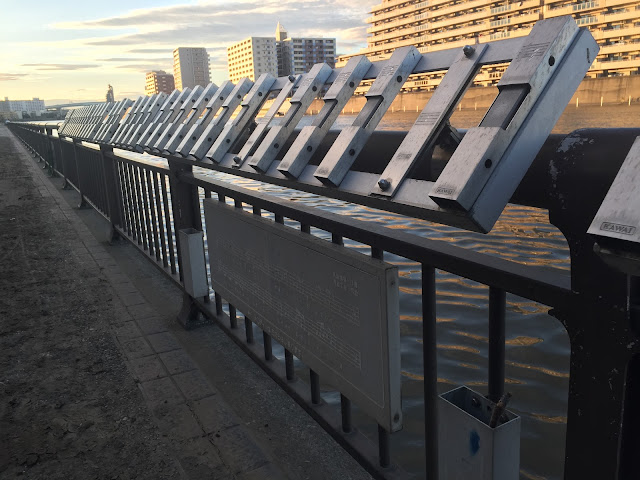 There were also two workers cleaning already up. From there I went a bit further to Arakawa river and was not the only disaster tourist. Actually one has to admit that the river got much nicer with the flood. Normally it is a very regulated river (as nearly all rivers in Japan) that flows in its concrete bed... but today there was a nice river landscape... only that those greenery are trees that normally stand between baseball fields and BBQ places and have covered completely the lower cycling path. But not the one on top of the dyke... otherwise large areas of Tokyo would have been flooded. 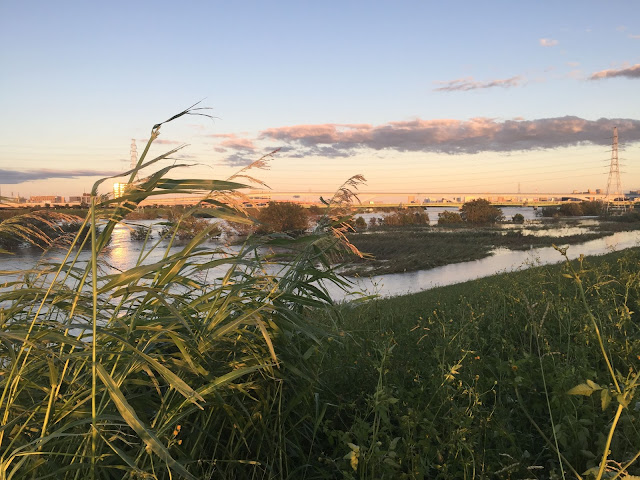 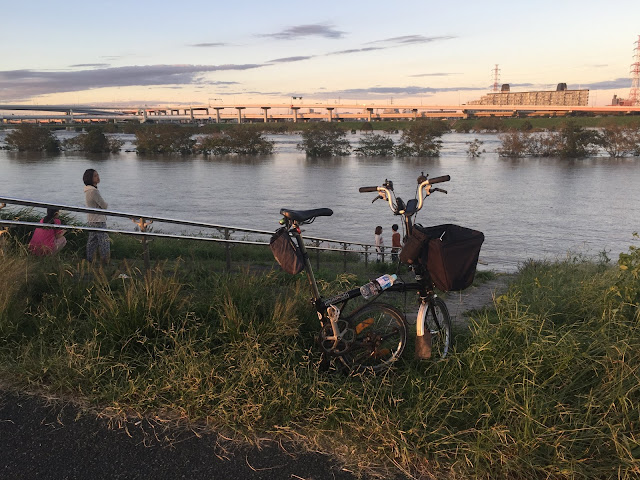 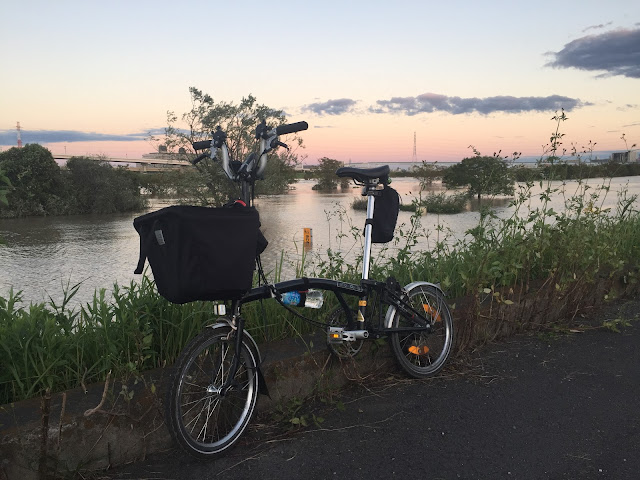 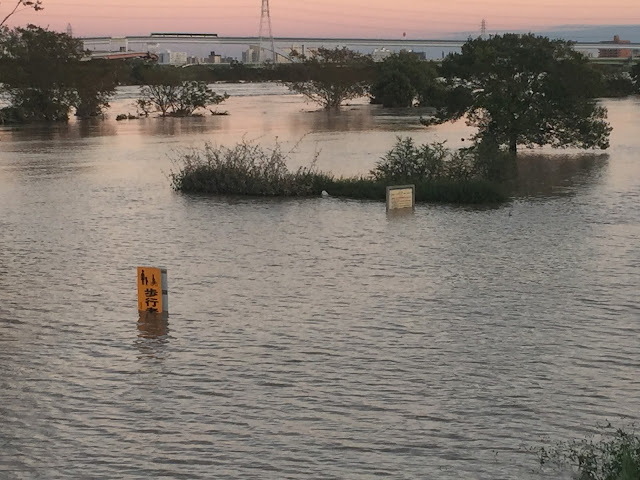 I arrived to Arakawa right on the time of sunset... so nice light... but nothing can make the ugly buildings and highways go away. A much bigger typhoon would be needed for that.

Now it was finally late enough to get to my onsen of the day. I found it by chance looking on the internet... A new onsen, for me at least. And a very tasteful one, kind of wants to be high class Japanese while still being a super-sento as a matter of fact. It was however relatively full. Not terribly full, but still...

After a long and relaxing soak, I had a good dinner... and then needed to ride back the last 10 km to Shinbashi. For that I had planned out a route through smaller streets but that would go straight for a long time, and this was a very good route, bringing me nearly from the onsen all the way to Kanda (and from there I know my way through small - and a few bigger - streets around Tokyo station to Shinbashi area).