The weather forecast for both Tokyo and Osaka (and Kyoto, where I actually wanted to go) for this weekend was very hot. 35C or more... which is simply a temperature at which I cannot move unless under constant air conditioning. Since from last weekend's trip to Tohoku (Ginzan onsen - Shinjo - Kakunodate - Hachimantai - Tazawako) I still have two days on my JR East Tohoku Pass I decided to use it this weekend to go to Karuizawa. In reality we wanted to come here 2 weeks ago, but had stayed up too late the evening before and did not have a full weekend, but rather one day only. A colleague of mine is a big fan of Karuizawa, but mainly was talking about good shopping in Karuizawa. I think there is an outlet somewhere... so it did not sound very interesting. Only recently I enquired further and he showed me some more pictures of beautiful lakes and old streets, which seemed to be more to my liking.

Day 1
Today I made it to Karuizawa only around 14:00 arriving by Shinkansen from Tokyo after leaving the monthly rental apartment in Tokyo where we had stayed from early August. Straight from the station I went to one of the many (as I found out) bicycle rental shops right outside of the station and got my mamachari with 3 gears and a big basket. And set off through the very tranquil town of Karuizawa to my first destination the Kumoba pond. Actually Karuizawa does not seem to be a town/city in itself, but rather a forrest in which the rich from Tokyo have build their summer chalets. But it does not seem that there is someone really living in this town. 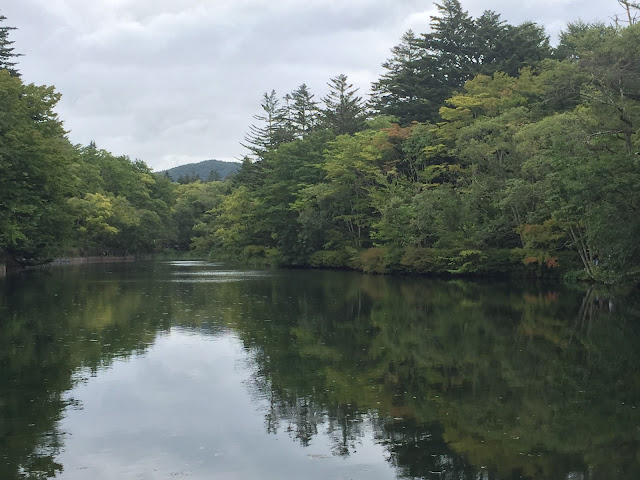 Nice tranquil lake, very beloved by all the Chinese (Taiwanese?) tourists. Obviously in autumn the colours must become spectacular. The lake is in the middle of a forrest which is inhabited by the rich, who have built anything from uninspired houses, similar to the ones one can find all over Tokyo, to historical buildings... 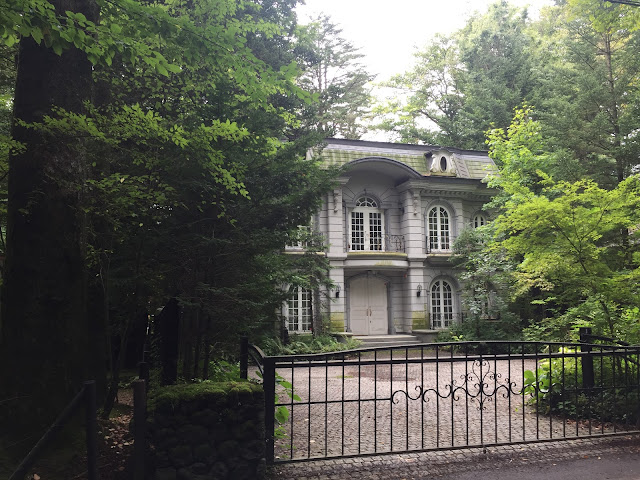 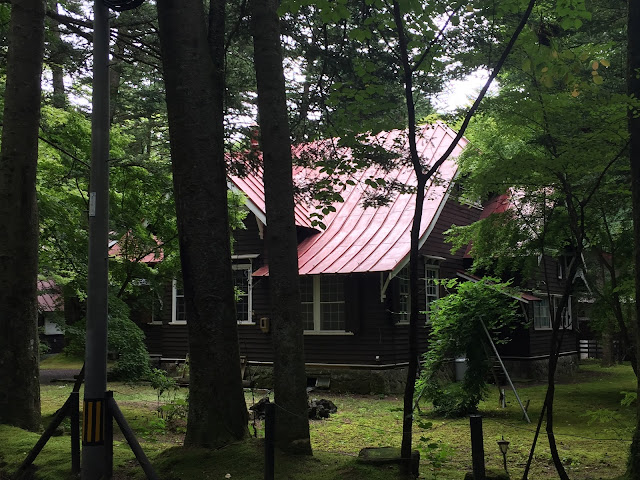 Along the road small signs indicate where the holiday house of which family is. All in the same very simple script, as unassuming as possible. Understatement the Japanese way. 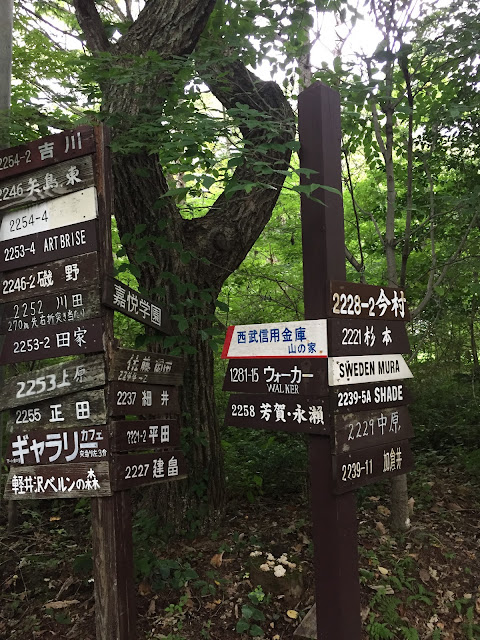 At the end of a straight and long double alley through the woods ... 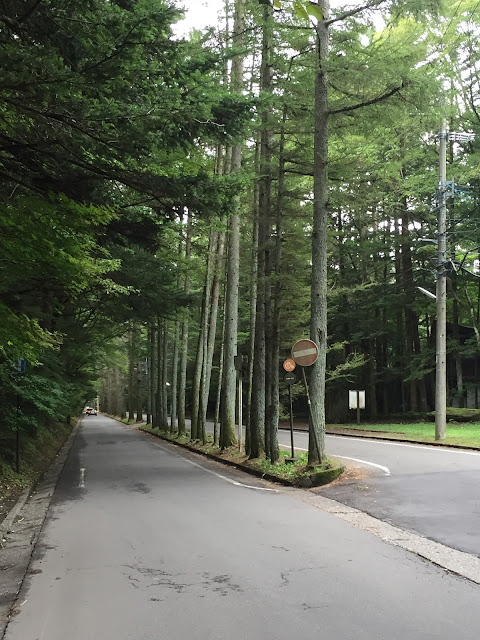 ... one arrives to an old hotel, now national monument. Originally build at the beginning of the 20th century, but in totally Western style. 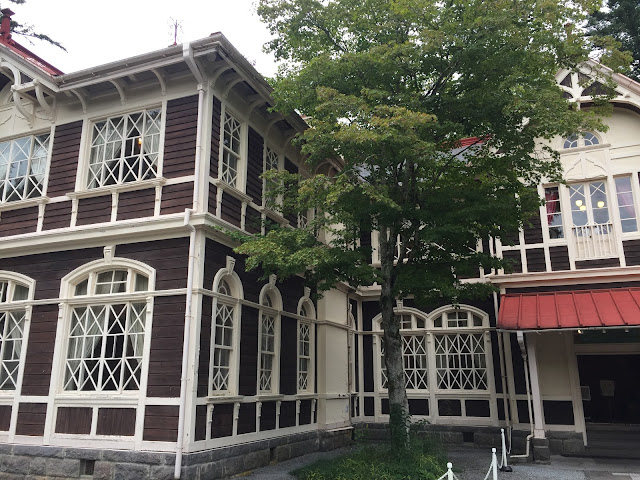 Karuizawa had just been "discovered" by an English missionary who found that spending his free time there, was the best thing he could do and more and more foreigners, but also Japanese did the same, so Karuizawa became the resort area for the rich from Tokyo wanting to flee the heat of the city. The hotel was mainly used by foreigners and luxurious by the standards of the time. When it finally closed (I think in the 1970's) the building was declared a national monument and moved from the place where it originally was to this new location. Probably in the original location a new hotel has been built.

And no, in case you wonder, I did NOT invert the picture below. In the good old days in Japanese when writing in vertical, right to left was used. 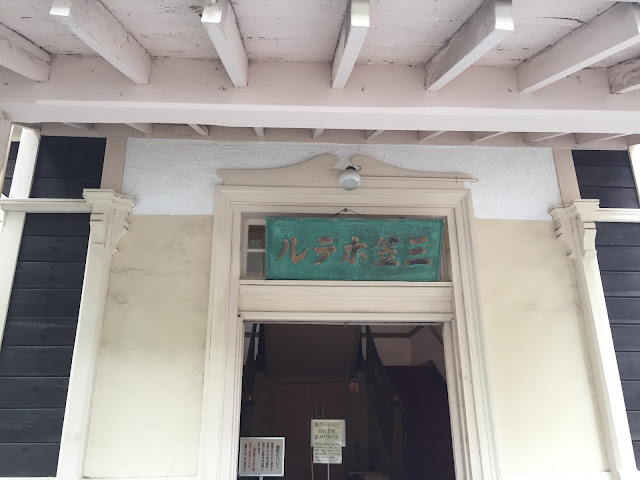 After the visit to the hotel I made the way to my hotel for the night, which was in the other part of Karuizawa. I did not dash out the money that would be needed for a high end hotel (when I reserved a few days ago, there were offers of 80,000 Yen and more / night on Jalan)... I however took a small cat themed pension. 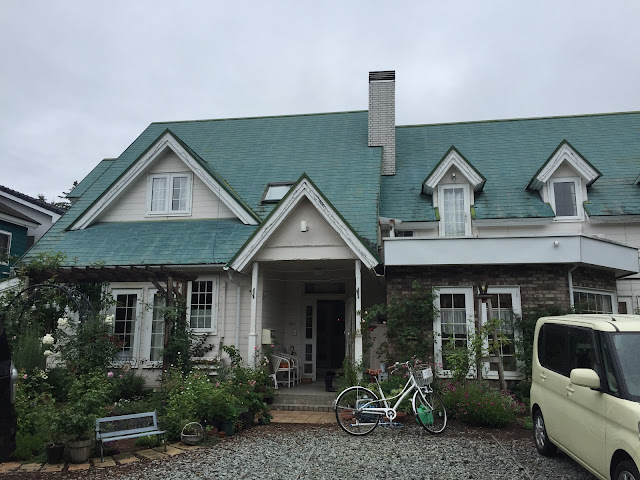 After relaxing a bit in my small room I wanted to ride to the close-by onsen in Hoshino area, but when I left it had started raining. This wouldn't however stop me from going to an onsen... it just stopped me from riding there.

The tombo no yu onsen is in a very posh area. A place my husband would call "adequate for our social standing"... and a kind of place that we normally do not visit. But I have to admit it was very nice. I walked there with a big umbrella through the rain and through the forrest which was illuminated by designer lamps along a walkway winding through the wood along a small stream until reaching the onsen. And then the bliss of soaking. The onsen itself had only 3 tubs, 1 big inside and 1 very large outside, plus a cold water one outside. While the tub inside was very hot, outside it wasn't that hot and it had many different hights including one could lie flat in the water. Very relaxing indeed.

After my soak I went for a late (for Japanese standards) dinner in the posh area. I have to admit that the menu sounded more appetizing than the actual plates... Return to my small pension then by taxi as I did not want to walk again 30 min under the rain and in the cold! (It was actually quite cold in Karuizawa and the only jacket I even brought with me to Japan is only a light cardigan).

Day 2
Today after a Western (and good) breakfast I went back to the posh area where I had ended the day yesterday, wanting to explore it by daylight. However my first stop of the day was a 7/11 along the way to buy a rain jacket. It had rained most of the night and had just started raining when I was about to leave... but also had stopped nearly immediately. But the weather clearly wasn't going to be stable. As I had the rental bicycle, I knew that I had to ride it back to Karuizawa station, so I took the safe decision to buy a cheap plastic rain jacket. Which luckily is still in its original packing after a day exploring Karuizawa.

My second stop then was to explore the area of the two churches in Hoshino area. Karuizawa Kogen church and Stone church. The second one seems to be very interesting, architectonically, however I wasn't even allowed anywhere close to it. I knew that on weekends it is only open from 7:30 to 8:30 in the morning before that wedding marathon starts. But I had hoped to at least see it from the outside. But to no avail. The other church was pretty much off limits as well, however somewhat better visible through the woods. 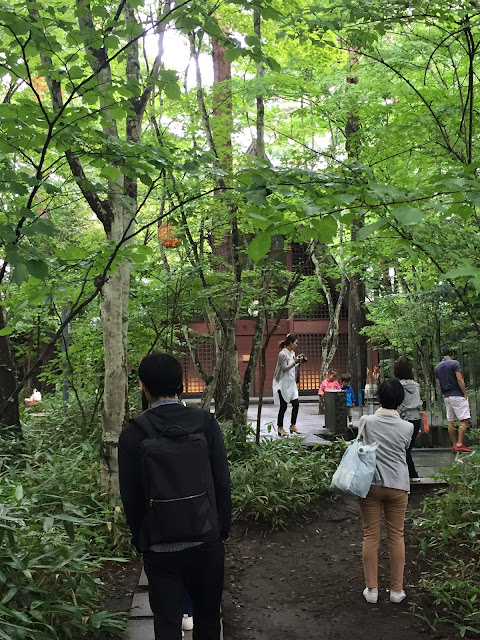 Karuizawa seems to be a very popular destination for weddings.

I continued my exploration and came to an authentic forrest, protected for wild birds. However to me after walking duly the 2 km shortest course through the wood, it seemed just like any forrest. And I even didn't hear any birds, probably because at the entrance facility I was equipped with a bear bell. 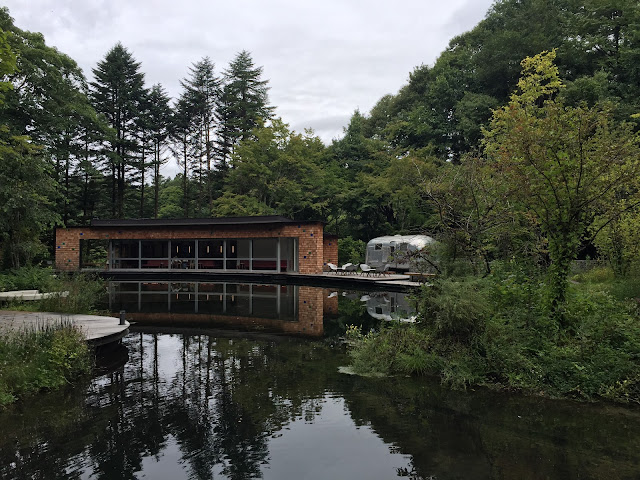 After the 2 km through the forrest I decided that I had earned an other bath (I hadn't taken a shower or anything in the morning in my pension, knowing that I would head for the onsen later).

Also this onsen must have been constructed by a good architect. At least it looks very nice. Women to the right, men to the left, some water in the middle. 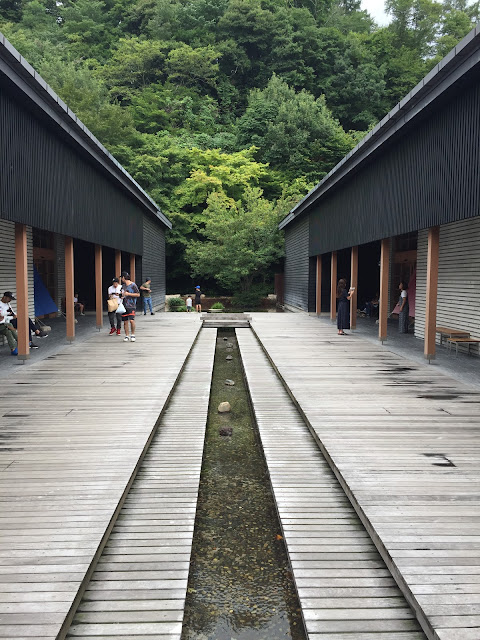 ... and a sneak preview of how the view from the rotenburo would be: 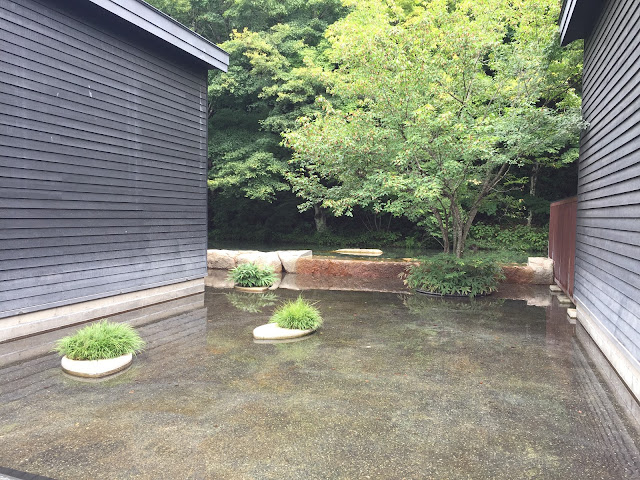 After the bath I went back to the posh eatery area of yesterday night and although I had decided NOT to eat there, I was finally overcome by both hunger and the availability of a table outside one of the cafes so I had a sandwich, which wasn't very good actually, but in nice atmosphere along a scenographic river. 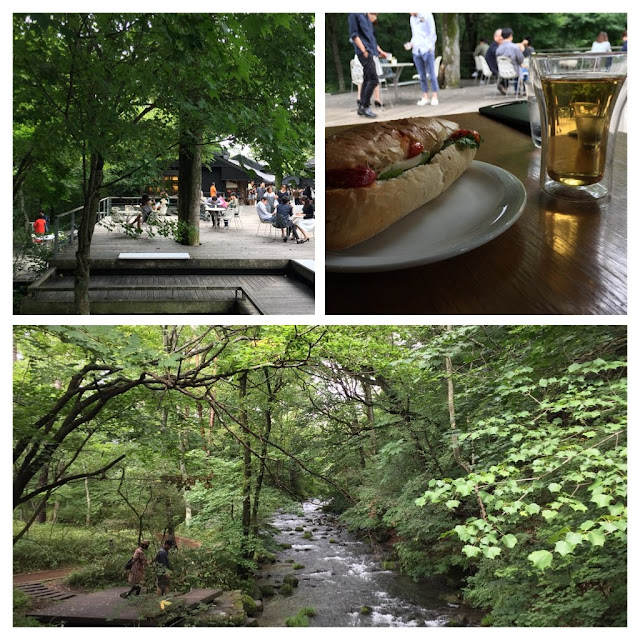 Then I went back to my pension, picked up my heavy backpack (containing 2 computers and little else). The rest of my luggage, I had shipped on Saturday morning already to my hotel in Osaka, where they will hopefully await my arrival today in the evening.

And then on to the second attraction of the day, the museum of Hiroshi Senju. I have to admit that I had never heard about this artist, but the cousin of my husband (an architect in Tokyo) had spoken very highly about the museum building. So I went, and yes, the building is breathtaking. With a zen kind of quiet atmosphere totally focused on nature and giving the art works a perfect room. 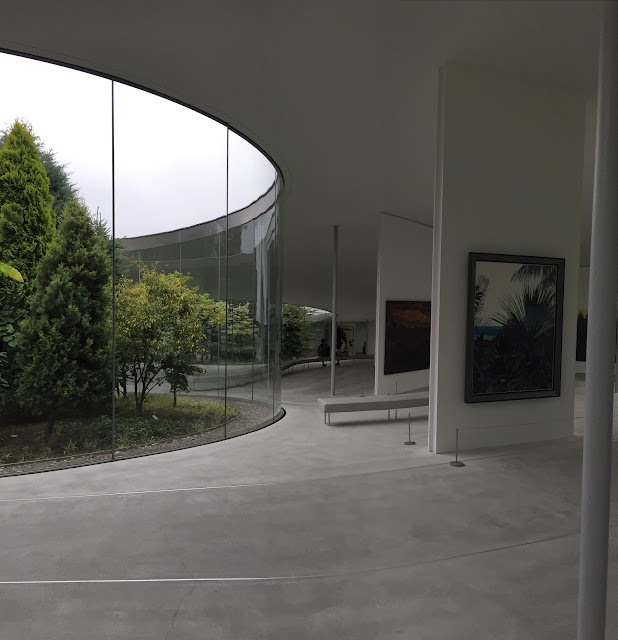 Even the artwork itself was quite nice. Varying. Some was a bit boring, but specially the waterfalls and also the merger of traditional Japanese art (e.g. room dividers) with modern art was a great idea. The museum isn't very big nor are there many works, maybe around 30, so the entire experience is very relaxing. The entrance to the toilet also for sure must be one of the nicest in Japan, with lateral views into the surrounding landscape.

From the museum along the main road, there was even a bicycle lane. Nothing to the Dutch standards, but at least not the normal shared pedestrian/bicycle walkway. Although I strongly suspect that the pedestrians would use the bicycle lane indiscriminately. But there weren't any around. In other places in Karuizawa one can also see these "knooppunt". I had left the museum right on time to get back to Karuizawa station just before rain started, returned my bicycle well before 18:00 and considered at the station to change my ticket to an earlier train, but then saw that all the earlier trains didn't have seats any more available. So instead I opted to go to the outlet (see above) which results to be right besides the station and is ENORMOUS. I haven't seen the entire shopping area, because it has several separate wings each of them large by themselves. All this quite nicely placed into the landscape, and luckily with arcades in front of the stores so I didn't get wet.

At the Royal Copenhagen store, I bought a birthday present for my mother and had my personal Mr. Bean experience. But all nicely packed up, and should definitely not suffer any further harm. I say further harm, because being an outlet the porcelain was second quality and apparently there is a small error somewhere... which my mother can try to find. The local Mr. Bean did not make me miss my train and so I finally boarded it shortly after 18:00, then changed at Tokyo and am now on my way to Shin-Osaka where I should be arriving within a few minutes. To the warm weather again!