Although (or maybe because) the day did not go according to plan, I had a marvellous experience at a local matsuri which was the local part of a famous matsuri that is hold only once every 10 years in Matsue, the Horan Enya.

In the morning I had visited Matsue castle (more about that below) and then was facing the decision if to continue with the route I had planned, out on an island in the middle of Lake Nakanoumi to visit a famous garden: Yushien or to abort and just do a bit more sightseeing around the castle and return to my hotel. I am kind of coming down with a cold, but taking Frenadol... but it's not too bad either. So well, I decided to head out to the garden.

The way there lead me through some country roads along the river that connects the two lakes by Matsue. 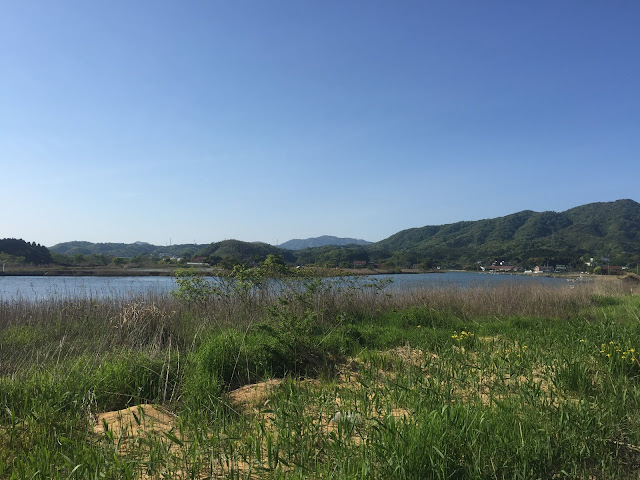 However it was windy and hot, although the air was quite cold, and I got more and more tired... so I decided to just head to the next bridge and return on the other side of the river, as I had come yesterday from Yasugi into Matsue. Shortly before arriving to that bridge however I passed a very small fishermen village and there was clearly something going to happen. A good number (maybe 20) photographers with enormous objectives had gathered and were waiting... I had no idea for what they were waiting, but decided to wait as well. It was kind of clear that it must be a local festivity.

After a while from the village these two appeared and offered to take a picture. 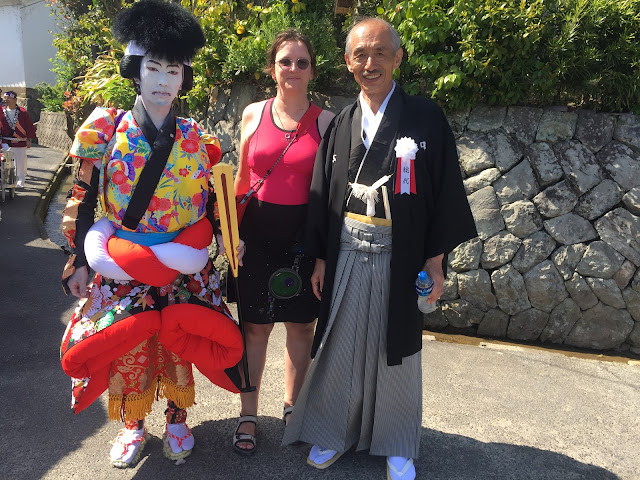 More and more people appeared and all headed to the small jetty to board a ship that was moored there, but before that it was the turn to take the official pictures. One of the many photographers was the official one, plus two TV channels were there taking some pictures and many amateur photographers. 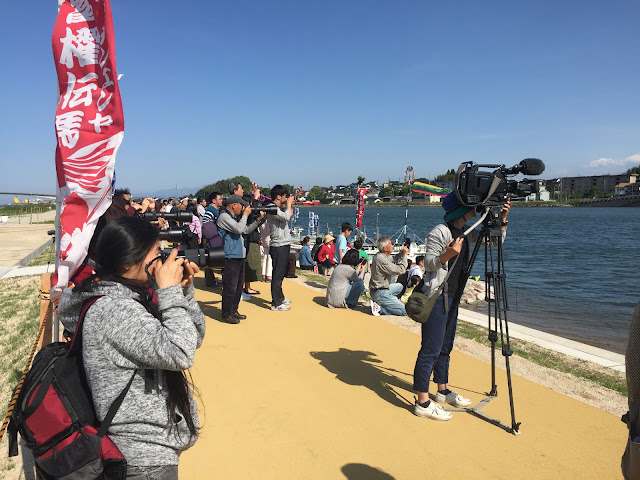 Overall however there were not that many people around, and getting a clear shot was easy. 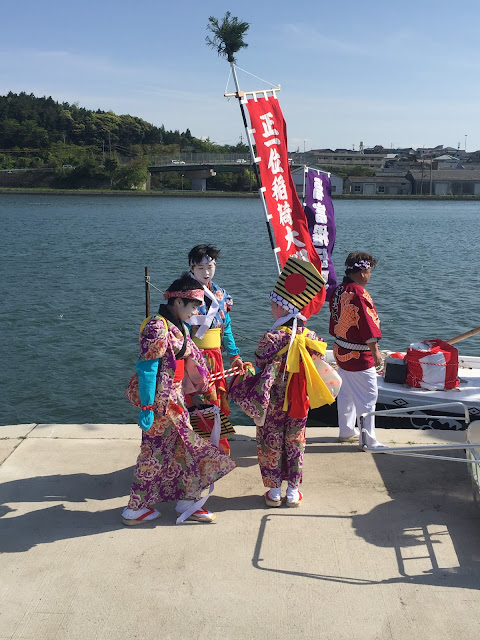 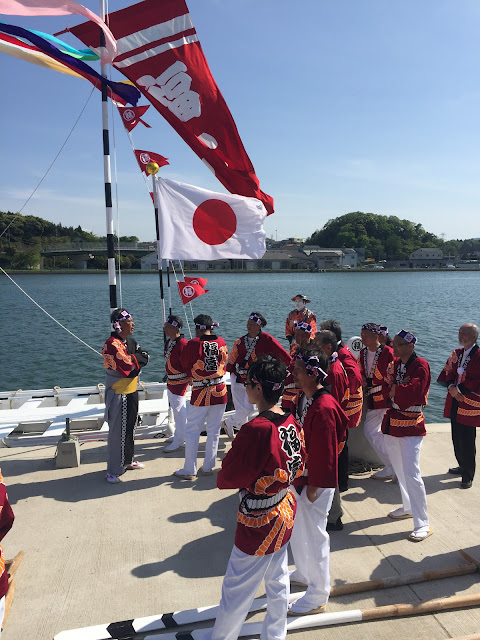 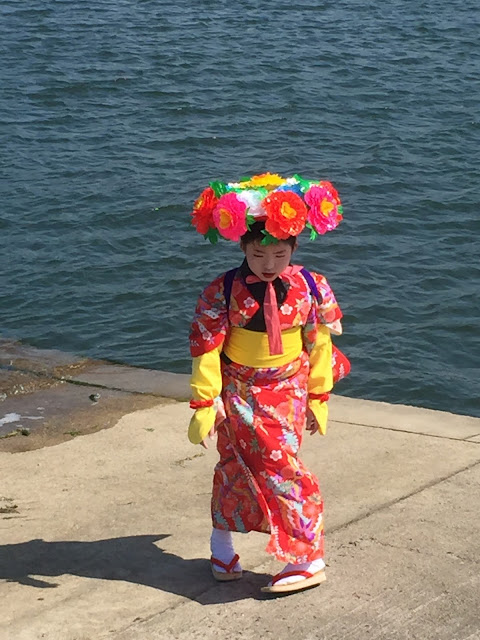 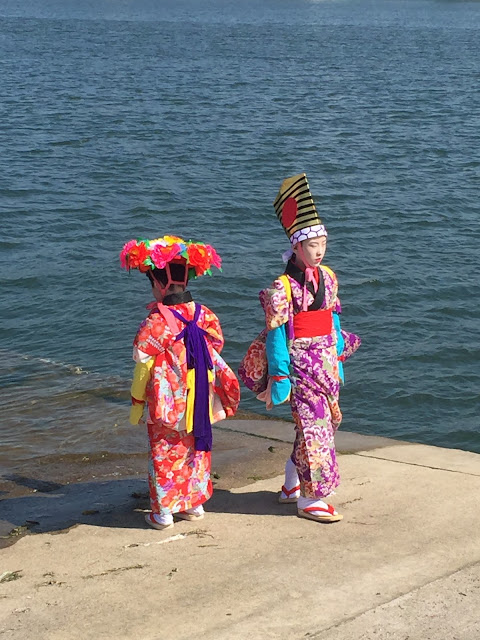 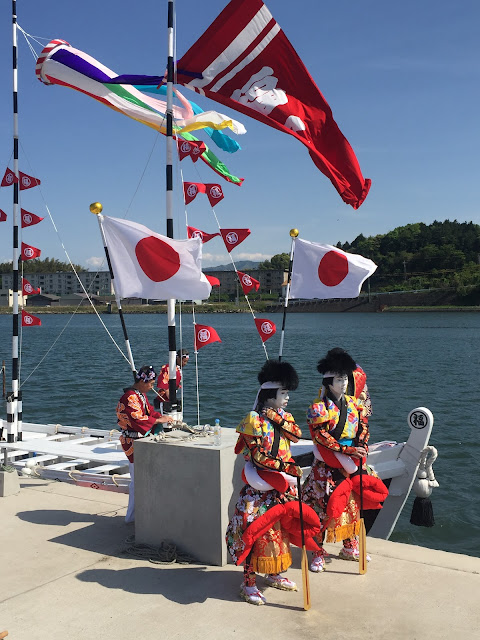 And finally the boat headed out into the river between the two lakes, while one man was dancing with a ceremonial rudder at the bow while an other one was dancing with two long lace decorated sticks at the stern, the men in the middle of the boat were rowing (only for show the ship actually moved with a motor) and singing Horen Enya. (See video at the top of this post).

I later learnt that this matsuri is conducted only every 10 years with many more boats that go to Matsue to pick up at the Inari jinja (close to the castle) the local god and bring it to an other jinja at the Nakanoumi and then pray there for 10 days, before herding it back to Matsue and its own shrine. The next time this matsuri will be celebrated is from 18th May onwards and it will be apparently everywhere very crowded. But not so today on the local version of the matsuri.

While enjoying the sight at some moment I was approached by one of the TV guys, and even gave an interview about my impression of this festival. Which was obviously very good, so colourful and not your normal Mikoshi matsuri, but one on boats.

So finally I didn't make it to the garden and not even to the bridge where I had thought to return, but spent a nice and unexpected afternoon among the celebrating fishermen seeing from the first row a small glimpse of one of the most famous matsuris in Japan.

When the boat after 3 rounds in front of the pier came back to the shore I made my way to return to Matsue.

In the morning when visiting Matsue castle I had seen that the samurai houses were open until about 17:00 (or maybe even longer), so I decided to go and at least visit the Hearn Residence. Well, it is a rather small Japanese house, with an even smaller garden. Nothing special, but it is in a row of other preserved Samurai houses many of which one can visit. What was interesting though where the trees behind those buildings which were full of cranes making their nests: 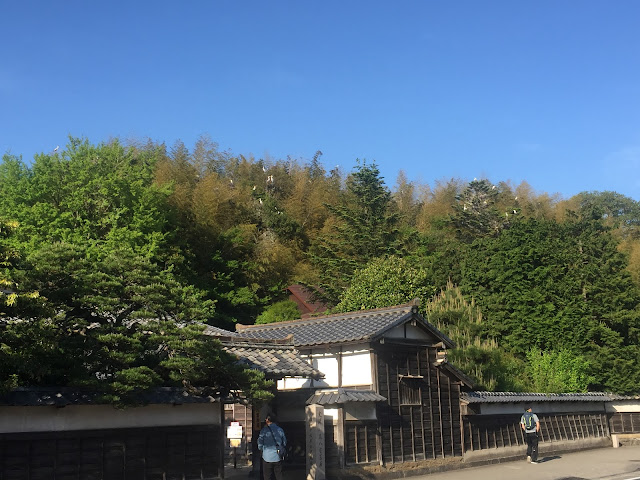 After the visit to the Samurai neighbourhood I made a small detour to the Giant bicycle shop in Matsue and got my bicycle pumped up. Afterwards I took a short break at the public hot footbath.

So now back to the official main highlight of Matsue, the castle: 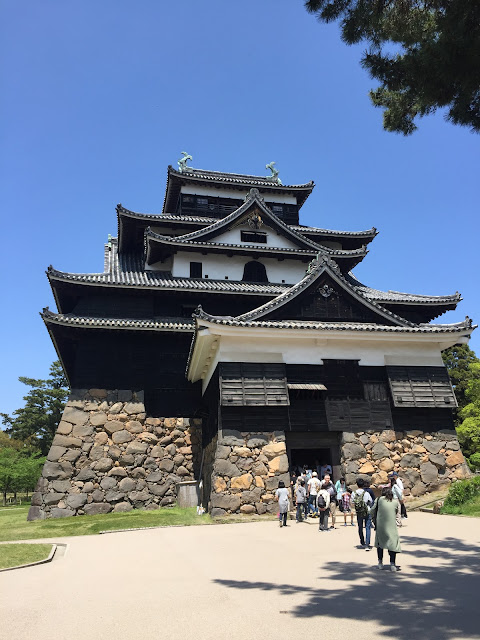 It is one of the 12 surviving original castles in Japan, so I visited it first thing in the morning. Although I saw somewhere (when already leaving) a possible indication how long it could take to get up to the last floor of the castle, actually there was no waiting time getting up, On each of the 5 floors there are some small exhibits about the construction of the castle, which are also very well described in English, and then one more flight of steep stairs up, more exhibits... until the very top: 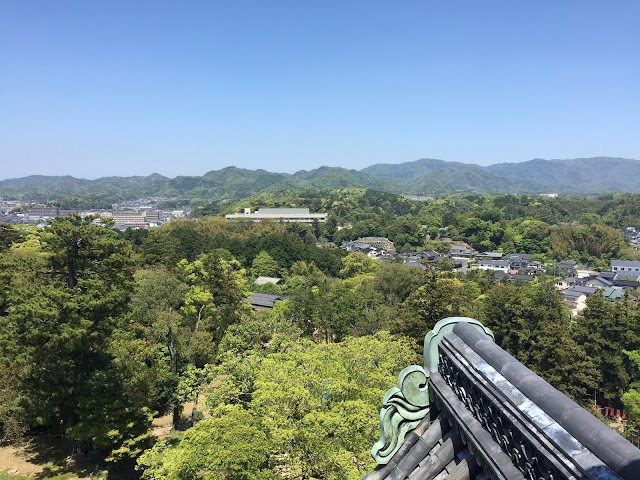 Now actually the view from the top isn't that nice actually, with the new city below. For getting down there was some queue but mainly due to the stairs being so steep that one needed to descend them slowly and carefully.