After the rainy weather yesterday, today, as promised, it was sunny and nicely warm. The right weather for a new record ride from Yamatoyagi to Wakayama, a total of  91 km.

Luckily the ride is mainly downhill, once a small pass is overcome behind Yamatoyagi, but the way up to that pass is quite gentle, so not a problem. Also the road I took up, was very bicycle friendly, small country side roads, very little traffic, often through villages in idyllic landscape. And always along a train line that makes the same trip (much faster than me on two wheels). 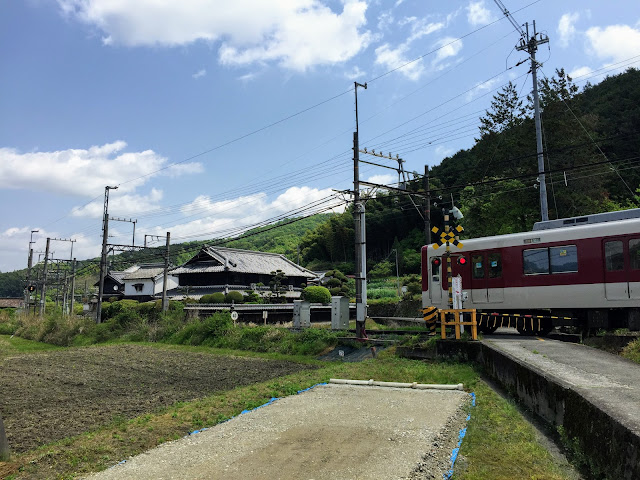 Close to this Sake factory, there is Gojo station, a small station, with a very formal station master who took about 15 min to sell me the tickets for tomorrows trip from Wakayama through Shin-Osaka, Okayama to Yasugi. Everything needed to be controlled and checked again and again (he was alone, so couldn't ask a QC by a separate person). He obviously also has other duties, so is not specialized on selling tickets. At a ticket counter e.g. in Osaka that same transaction would have probably taken 3 min... But time was no problem and it is all an experience to see these hyper correct employees at their work. 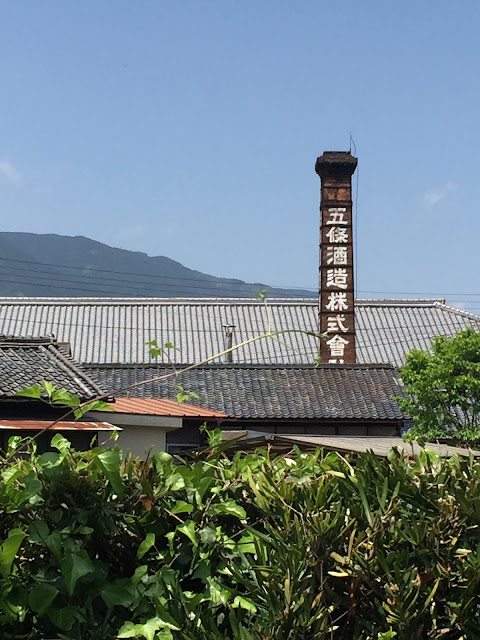 Not too far from there I had my lunch (which I bought at the one and only shop at this station) along a river, which was decorated with rows and rows of fish kites for the boys day: 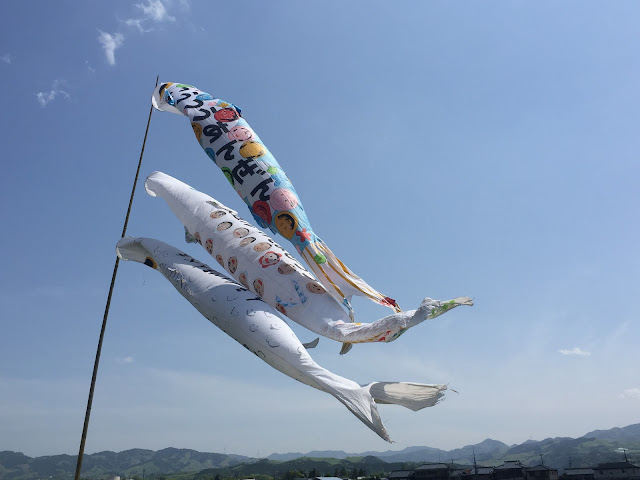 At about km 30, following the route I had planned on Garmin, I crossed the river, and then a cycling lane appeared. First it was only a blue line on each side of the street without any description. (But I knew that there could be a cycling lane and I knew from Kibi-Plain and Shimanami-Kaido that blue is a likely colour for a cycling route.)

The lane was partially simply on a normal, but not too busy road, but there were also parts on proper cycling lanes along the river. This here was probably the nicest part of all: 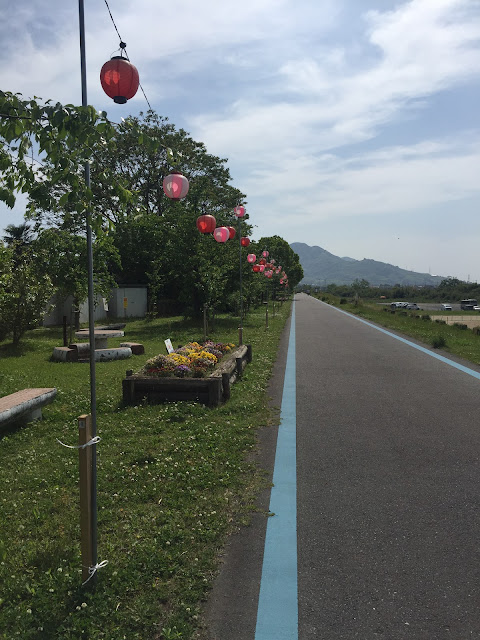 On the river part, there were also some obstacles, but nothing like in Osaka, where you need acrobatic skills to ride through them (or just need to get off at each one). 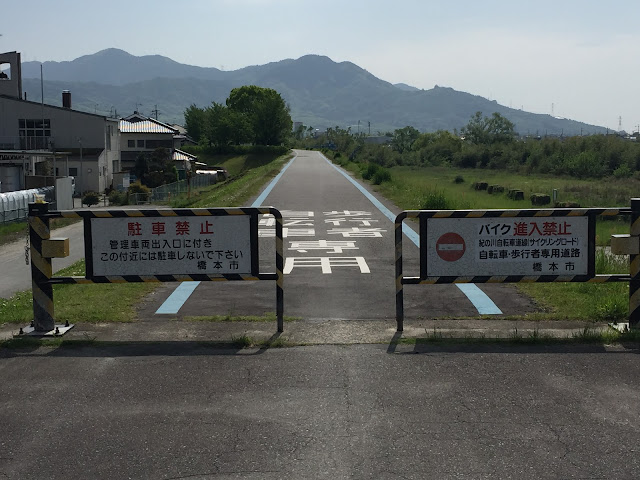 However, as so often in Japan at some point the cycling lane just disappeared. It first disappeared for me shortly after the Jison-in temple (see below). I found it again, after a while when I decided to cross the river. It must have crossed the river somewhere much closer to the temple. However the joy of finding the cycle lane did not last for very long, it disappeared from the street without any warning. What might have happened to that blue line? Riding on national route 24 was not an option, as there is way too much traffic, but there were always small streets running just parallel through the villages, so no problem at all. After a while there didn't seem to be a good continuation and I started to really wonder where this cycle lane had gone, so I decided to head down to the river in the assumption that the cycle lane would be somewhere down there. And well, it was, I saw traces of it just after crossing the bridge at km 65. But soon after I lost it again. Maybe it crossed the river again? Anyway, I continued on the side of the river where I was and found again small side streets all the way to central Wakayama and my hotel of the night.

As there were so many km to cover, I hadn't planned for any sightseeing, however when passing Jison-in (I actually passed it and then turned back), there were big signs for "Unesco world heritage"... and I could see the temple really close from the street, so I did not give it a miss. 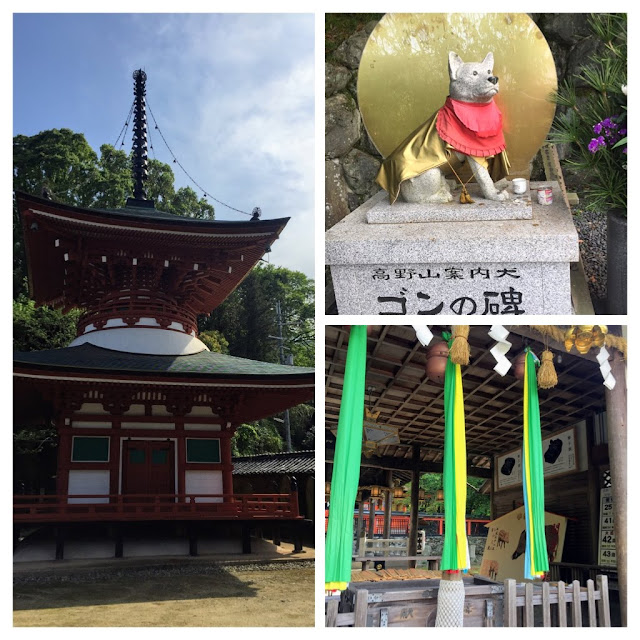 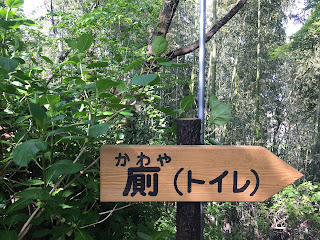 I looked up the kanji for "kawaya" 厠 and the only other use of this kanji came up as 厠の神 (Kawaya no kami) the god of the toilet. I guess that in a temple with shrine at the start of a pilgrimage route, there must be gods for everything, including for the toilet.

While I was at the temple, there were a few other visitors, the most notable one a middle aged Japanese who jumped out of a taxi, sprinted up the steep stairs to the shrine, took pictures of everything, and then sprinted dow the stairs again, back into his taxi. Express tourism! 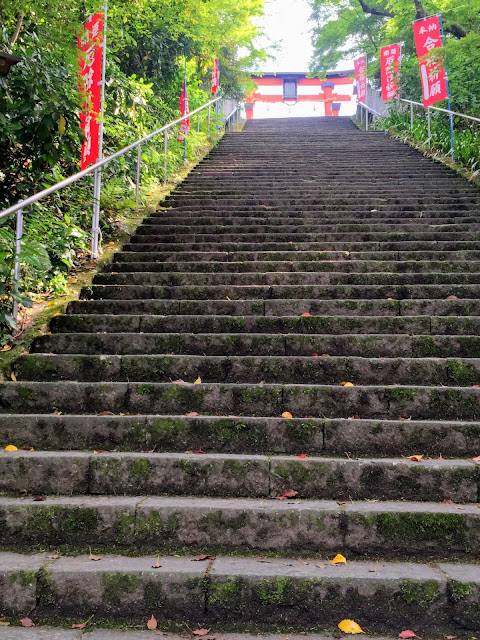 Garmin unfortunately died after about 74 km (well, its battery did). I somehow suspect that either there is a setting that makes it use more battery, or that maybe the battery isn't anymore what it once was, but it is becoming harder and harder to make a full day trip on one battery load. Unfortunately I also forgot my portal battery charger at home... and was too lazy to get a new one while in Japan. But my phone still had enough battery to record the rest of the ride.

While riding into Wakayama I checked if there were onsen somewhere with a rotenburo, but I wasn't able to find anything convincing, so I continue on to the hotel, where I asked and was recommended Hanayama onsen (花山温泉), which I had seen during my search, but discarded. After further searching on the internet I saw that it seemed to be an interesting onsen, and made a quick night ride to it.

And yes, it was interesting. It only has one small rotenburo pool, but inside there were 6 different pools, 3 of them with the signature waters of this onsen, which are extremely high in mineral content, and 3 with normal tab water. Out of the onsen pools, they had 3 different temperatures, 41 C, 37 C and 26 C! 26 C is a very unique temperature for an onsen. Too cold to be a "real" onsen, but too warm to be a cool downer after sauna. And actually also too cool for me to immerse myself completely.

Part 1 from Yamatoyagi down to close to Wakayama where Garmin's battery died:

Part 2, the final kilometers into Wakayama, recorded directly on the iPhone Strava app: